This chapter discusses the following:

In a dental emergency clinic, pain is one of the most common causes for patient attendance. Practitioners should understand how pain is generated and how best to control it.

As a general principle, it must be remembered that the best form of analgesia is to remove the underlying cause that is leading to pain. Some hints on the drugs to prescribe and the choices available are given later in this chapter.

Pain is a powerful motivating force for all sensate beings. It is described as ‘an unpleasant sensory and emotional experience associated with actual or potential tissue damage’. The sensory nervous system alerts an organism to any noxious stimuli that it might be in contact with and often sets off a reflex withdrawal from the source of pain. Awareness of sensation is vital to survival and pain is the most emotionally charged of all sensations. Thus, there is also a strong psychological and therefore subjective element to an individual’s response to any painful situation.

Nerve fibres subserving pain, touch and proprioception are shown in Table 8.1. They react to a large number of mediators, most of which are involved in the inflammatory response. These mediators, when released during tissue damage from whatever cause, stimulate the pain fibres that conduct stimuli centrally. Repetitive stimulation can cause a state of central sensitisation, which makes further stimulation give rise to more prolonged pain perception.

Table 8.1 Speed of conduction and activity of nerve fibres.

The initial stimulus may not be perceived as pain as there is thought to be a gate control mechanism, first described by Wall and Melzack. This ‘gate’ is a synaptic link between the initial impulse and the central connections leading to the perception of pain (Figure 8.1). A single pain impulse may not pass through this gate, but if the stimuli are sufficient, pain will be perceived. Other sensory fibres (Aβ) transmit stimuli more rapidly than pain fibres and impulses also pass into and through this gate mechanism. These other impulses are thought to modulate the opening and closing of the gate against pain stimuli and this results in the possibility of blocking pain by closing the gate due to overload from other sensory stimuli, such as pressure. This phenomenon is described as afferent inhibition. 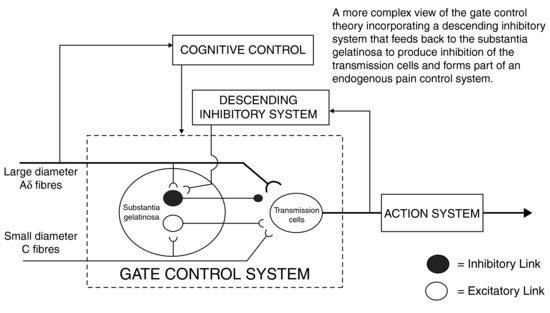 Three main types of pain are described as follows:

1. Nociception: It arises as a result of the inflammatory response in tissue injury.

2. Neuropathic pain: It is due to an altered neural response, often as a result of damage, such as post-herpetic neuralgia but may arise spontaneously, as in trigeminal neuralgia.

There are a large number of pain mediators. Such mediators can act singly or together to intensify the perception of pain. Many of the mediators are involved in other aspects of the inflammatory response, such as increasing vascular permeability. With an increase in the inflammatory response, the site of damage can become either hyperalgesic, when any stimulus is perceived as pain, or there may be peripheral sensitisation in which pain thresholds are lowered, giving rise to more afferent nociceptive activity. Some of the more important mediators are outlined in Sections ‘Peripheral mediators and Central mediators’. A more comprehensive list is included in Tables 8.2 and 8.3. 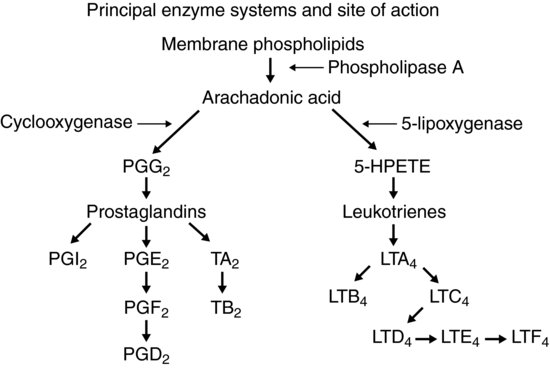 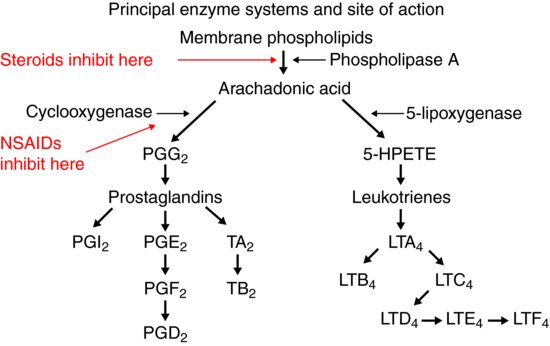 The inhibition of these mediators is the principal action of most peripherally acting analgesics.

An even larger number of central nervous system transmitters involved in the perception of pain have been isolated. However, substance P has been shown to be involved in the mechanism of pain both centrally and peripherally. Opioid action through the endorphin system may, in part, be due to its activity against substance P, but a larger part might be the modulation of the effects of pain rather than modifying the stimulus itself. Endogenous opioid receptors can change the way in which pain is perceived. Table 8.3 contains a summary of central transmitters.

In summary, peripherally acting analgesics seem to have efficacy by reducing stimulation of pain fibres by suppressing the release or synthesis of mediators at the site of the noxious stimulus. Centrally acting analgesics may alter the response of these stimuli as they arrive centrally, by blockade of conduction or alteration of perception of the stimulus as pain.

Distribution of pain fibres in the mouth and jaws

The sensory nerve supply to the mouth, teeth and jaws is entirely from the maxillary and mandibular divisions of the trigeminal nerve. Some areas encountered far back in the mouth and tongue are supplied by the glossopharyngeal nerve, but this is rarely of significance in the management of dental pain.

The teeth have a very rich supply of sensation, with the pulp only having pain fibres within it. This means that all sensation in the pulp is perceived as painful, either from noxious products of inflammation, or increased pressure within the closed pulp chamber. This may help to explain the intransigent and constant nature of pulpal pain as the gate control mechanism only receives pain stimuli and thus will only act as an open gate in this situation. It may also explain why pulpal pain is so difficult to control with peripherally acting analgesics alone. Once damage to pulp causes irreversible pulpitis, the circulation to the pulp is compromised and thus pain fibres have no chance of relief until pulpal necrosis takes place with consequent death of pulp and associated pain fibres. All other areas of the body have other sensory supplies such as pressure and proprioception that can influence the gate control mechanism. All these elements in the jaws are found in the periodontal ligament rather than within the teeth.

Sources of pain in the mouth and jaws

Simply stated, the choices for the clinician revolve around: