The field of endocrinology encompasses disorders of hormones and the glands from which they are secreted. Hormones are molecules secreted directly into the bloodstream from one organ, with regulatory actions at distant sites. Some, such as insulin, act via cell surface receptors, while others, including thyroxine or steroid hormones, bind to intracellular receptors.

Endocrinology covers a wide spectrum of diseases, some very uncommon. The most common endocrine condition is diabetes mellitus, which is dealt with separately. Certain specialist areas, such as disorders of fertility and reproduction, will not be covered in this chapter, which will focus on the more common endocrine syndromes, or those of particular importance to the practice of dentistry.

Several endocrine glands secrete steroid hormones, and there is potential confusion in the way the term ‘steroids’ is used.

Most hormones are regulated by a feedback system, most commonly involving the pituitary gland, which is situated at the base of the brain, behind the optic chiasm, and is connected to the hypothalamus by the pituitary stalk. The stalk contains a system of portal vessels that carry locally acting releasing hormones from the hypothalamus to the anterior pituitary. These stimulate the release of the relevant pituitary hormone, which in turn acts on another distant endocrine gland to stimulate secretion of its hormone. The regulatory feedback loop is completed when the hypothalamus detects the final product hormone, and inhibits its production of its releasing hormone.

The main hypothalamic–pituitary control axes are shown in Table 12.1 and Fig. 12.1. These feedback loops can be useful in clinical diagnosis. For example, if the thyroid gland fails to produce sufficient thyroxine, the plasma level of thyroid-stimulating hormone (TSH) rises in an attempt to stimulate the failing gland, and this can be measured in clinical laboratories. In the opposite situation of the thyroid producing excessive thyroxine, the TSH level will be suppressed.

Other endocrine systems have non-pituitary feedback loops, shown in Table 12.2. Some, such as the parathyroid gland or the insulin-secreting beta cells of the pancreatic islets, directly monitor the level of the target molecule that they regulate. Others, such as the aldosterone-secreting cells of the adrenal cortex, are involved in more complex control systems including other organs.

There are three basic things that can go wrong with an endocrine gland: 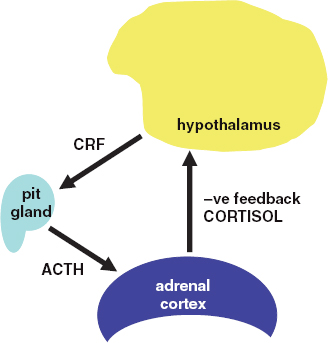 A common cause of failure of an endocrine gland is autoimmune destruction of the gland. Examples include type 1 diabetes, primary hypothyroidism and Addison’s disease. Glands may also be removed surgically, or destroyed by other diseases such as infection, radiation or invasion by tumours. Glands involved in pituitary feedback loops can also fail secondary to pituitary disease.

Excessive production of hormone can occur independently of the normal control mechanisms with benign or malignant tumours, or due to non-neoplastic overgrowth of the gland, e.g. the thyroid. It may also occur secondary to unregulated pituitary hormone secretion.

There are a number of clinically important endocrine syndromes, some of which cause characteristic changes in the patient’s general appearance which can be recognised by the trained eye. 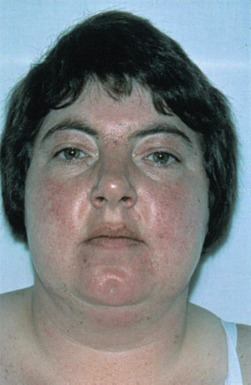 It is important to realise that systemic steroid treatment suppresses the normal pituitary–adrenal axis, and results in atrophy of the normal cortisol-secreting adrenal cells. Therefore, it must never be suddenly stopped, and the dose of steroid treatment may need to be increased in severe illness.

The most common non-iatrogenic cause of Cushing’s disease is a pituitary adenoma secreting ACTH. Primary adenomas or adenocarcinomas of the adrenal are less common.

Clinical features of Cushing’s syndrome and disease are many and varied. The obvious clinical feature is a change in body shape. The face becomes round, so-called ‘moon face’, deposition of fat at the top of the back is referred to as a ‘buffalo hump’, and there is abdominal obesity and wasting of proximal limb muscles, resulting in a ‘lemon on sticks’ shape.

Suspected cases of non-iatrogenic Cushing’s disease or syndrome need careful investigation in hospital. The key biochemical test is measurement of the plasma or urine cortisol level, which will be elevated, and is not suppressed by dexamethasone, an artificial steroid analogue which normally suppresses the hypothalamic– pituitary drive to cortisol production. Measurement of plasma ACTH helps to distinguish pituitary causes (when it will be raised) from adrenal causes (when it will be suppressed). MRI of the pituitary or adrenals is needed to localise the tumour. Treatment is usually by surgical removal of the adrenal or pituitary tumour.

Addison’s disease is due to autoimmune destruction of the adrenal cortex, resulting in failure of production of cortisol and aldosterone. The term is sometimes used more loosely to include other causes of adrenal failure. The glands can also be attacked by cancer, TB and surgeons. Hypoadrenalism can also be secondary to a lack of ACTH due to pituitary failure.

The clinical features of Addison’s disease can be non-specific, with general tiredness, weakness and weight loss. A clinical clue is hyperpigmentation. This may occur generally over the whole skin, but is particularly prominent in the palmar creases of the hands, and on the buccal mucosa. It may therefore be detected during dental examination. The hyperpigmentation is caused by an excess of melanocyte-stimulating hormone, which is produced as a by-product of ACTH.

If diagnosis is delayed, an ‘Addisonian crisis’ may occur. Features of this emergency include vomiting, loss of salt and water, resulting in severe hypotension and electrolyte disturbances, and hypoglycaemia. The hypotension or hypoglycaemia may result in coma.

The basic laboratory investigations for suspected Addison’s disease comprise a plasma cortisol level, which will be low, ACTH (raised unless the hypoadrenalism is due to pituitary failure) and adrenal autoantibodies. Urea, electrolytes and glucose should also be measured, especially in Addisonian crisis.

Treatment of an Addisonian crisis requires emergency intervention with intravenous hydrocortisone, glucose, and fluid and electrolyte replacement. Long-term treatment of Addison’s disease is with hydrocortisone and fludrocortisone. Hydrocortisone is the pharmaceutical name for cortisol. Fludrocortisone is a synthetic analogue of aldosterone, which stimulates retention of salt and loss of potassium via the kidneys. Replacement allows a return to normal activities, and even Presidency of the USA, as demonstrated by John F. Kennedy, a famous sufferer of Addison’s disease.

Patient education is important. They must never stop their treatment, and increased doses are needed during illness, since hydrocortisone is an essential stress hormone. Patients taking either hydrocortisone replacement or therapeutic steroids for inflammatory disease should always carry a steroid card to highlight this in case of emergency.

Conn’s syndrome occurs in people with a tumour or hyperplasia of the adrenal cortex. The resulting high levels of aldosterone secretion lead to potassium loss and sodium retention. The decreased potassium leads to muscle weakness and polyuria, whereas sodium retention leads to hypertension.

The thyroid gland secretes two iodine-containing hormones, thyroxine (T4) and tri-iodothyronine (T3). Although T4 is produced in greater quantities, T3 is the active form of the hormone, and T4 is deiodinated to T3 in the target cells.

Overproduction of thyroid hormones is also sometimes called ‘thyrotoxicosis’. The term ‘Graves’ disease’ applies to one specific form of hyperthyroidism caused by an antibody that binds to the TSH receptor on the thyroid cells and stimulates it. Other causes of hyperthyroidism are thyroid adenoma and toxic multinodular goitre. The term ‘goitre’ applies to any swelling of the thyroid gland (Fig. 12.3). One form is multinodular goitre, which may function normally, but nodules sometimes become autonomous from TSH stimulation, resulting in thyrotoxicosis. In contrast to hyperadrenalism, which is most commonly due to an ACTH-secreting pituitary tumour, hyperthyroidism due to a TSHsecreting tumour is very rare.

Figure 12.3 A goitre and demonstration of exophthalmos. 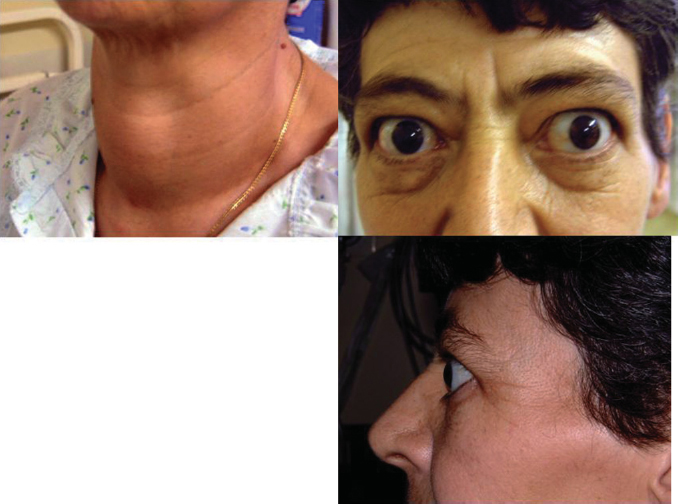 The clinical features of thyrotoxicosis relate largely to an increase in metabolic rate and to stimulation of the sympathetic nervous system (Table 12.3). The increased metabolic rate results in weight loss despite an increased appetite, and feeling hot, even in cold weather. Bowel activity is increased, with loose motions. Adrenergic or sympathetic activity results in tremor, most easily demonstrated in the outstretched hand, which is also warm and sweaty. Tachycardia occurs, and may develop into atrial fibrillation and heart failure, as happened in the case of George Bush Senior, during his Presidency in 1991.

Many patients will have a goitre, which is visible in front of the larynx in the neck and moves upwards on swallowing. This may be smooth, in Graves’ disease, or lumpy, in toxic multinodular goitre. A single toxic adenoma may cause a localised swelling of part of the thyroid.

Graves’ disease also causes certain non-thyroidal manifestations. Deposition of mucinous material in the orbit and extraocular muscles results in exophthalmos (protrusion of the eyes). Retraction of the upper eyelid, with white sclera visible above the iris, is partly due to the mechanical effects of the protrusion, and partly due to sympathetic stimulation of the muscle that raises the eyelid. Eye movements can be affected, resulting in double vision, and severe cases may even need surgical decompression of the orbit. Rare non-thyroidal manifestations of Graves’ disease are ‘thyroid acropachy’ (a form of fingernail clubbing), and thickening of the skin of the shins and dorsum of the foot (‘pre-tibial myxoedema’).

The investigation of suspected hyperthyroidism involves measurement of the free plasma levels of T4 and T3, which will be raised, and TSH, which will be suppressed. Thyroid-stimulating antibodies can be detected in Graves’ disease. Radioisotope scans, ultrasound and MRI scans are helpful in differentiating the different causes of hyperthyroidism and planning treatment.

Surgical removal of abnormal tissue is undertaken in thyroid adenoma or multinodular goitre. Both of the latter treatments may result in permanent hypothyroidism, and patients should therefore be monitored by periodic blood tests, and thyroxine replacement started if needed.

A hallmark of a severely underactive thyroid is the deposition of mucinous material in the subcutaneous tissues – so-called myxoedema. The term ‘myxoedema’ is sometimes used synonymously with hypothyroidism. The biochemical abnormalities found on blood thyroid function tests are the opposite of thyrotoxicosis – low levels of free T4 and T3, and a high TSH.

Hypothyroidism due to autoimmune destruction of thyroid can occur at any age, but is common in the elderly. Other causes are radioiodine therapy or surgery to the thyroid gland. It is occasionally secondary to pituitary failure, when the TSH will be low, and there will be evidence of failure of other pituitary hormones.

Clinical features are the opposite of hyperthyroidism, with slowing down of metabolism and sympathetic underactivity (Table 12.3). The weight increases despite a modest appetite, and the patient feels cold, mentally and physically lethargic and constipated. The pulse slows and the skin becomes dry. Muscles relax abnormally slowly on testing the tendon reflexes such as the knee jerk. In severe cases, myxoedema causes puffy facial features, especially bags under the eyes, and the voice becomes deep and croaky.

The treatment of hypothyroidism is simple and very successful – thyroxine replacement is given by a single daily tablet, the dose adjusted to maintain a normal TSH level.

Hypothyroidism is normally treated with thyroxine, which is administered orally. Tri-iodothyronine may also be used but is mainly employed as an emergency drug for the treatment of myxoedema where a fastacting agent is essential.

The agents used to treat hyperthyroidism can be classified as:

In addition β-adrenergic-blocking drugs can be used to control some of the symptoms of thyrotoxicosis such as tremor and tachycardia. The antithyroid drugs are thioureylenes, carbimazole and propylthiouracil. They achieve their effect by the prevention of incorporation of iodine into the thyroid hormones levothyroxine and tri-iodothyronine.

It might seem odd that iodide, an essential component of thyroid hormones, is used to treat hyperthyroidism. The mechanism of action is an inhibition of the release of thyroid hormones caused by the presence of excessive levels of iodide. Iodide is mainly used preoperatively before thyroidectomy or to treat thyrotoxic crisis. Radioactive iodine is administered orally as a single dose.

Impact of thyroid disease and treatment on dental management