A number of factors must be taken into account when treatment involving the use of implant-supported restor­ations is considered. Not only must the high success rate that is integral to implant dentistry be met but also the treatment should be carried out in a predictable manner. As far as patients are concerned, it is essential that their aesthetic and functional needs are met.

Therefore, the relationship of the residual ridge to the future tooth position must not be overlooked as the clinician assesses volume and quality of bone. The supporting bone will need to resist functional and parafunctional loads, and these must be assessed and related to the region being treated.

Several grafting techniques that attempt to correct bone deficiencies have been described. These include the use of resorbable and non-resorbable membranes in conjunction with the technique of guided bone regeneration (GBR).163–172 Particulate material from a variety of sources has been used as a space maintainer with varying results. However, the best particulate material is reported to be autogenous bone.173

Membranes have also been used in conjunction with autogenous block bone grafts with good results.174 The use of titanium mesh has been reported in the literature but largely as a means of containing autogenous bone or a mixture containing other materials together with autogenous bone.175–180 These have been used simultaneously at the time of implant placement or in a staged approach. A single-stage approach is reported to lead to poorer bone-to-implant contact than a staged approach.181,182

Although a variety of techniques are available, the use of an autogenous block of bone that has been shaped to correct the deficiency is considered to provide the best method of reconstructing a deficient ridge.183–186 Here again, a two-stage approach is reported to result in a better clinical outcome than a single-stage approach.187,188

More recently, manipulation techniques such as bone expansion and distraction osteogenesis have been described and reported to have high success rates, but not without the incidence of complications.189–195

Combining manipulation and grafting may become necessary, for example where a skeletal correction needs to be made as a part of preprosthetic surgery, when a graft can be used in combination with a maxillary (Le Fort I) osteotomy.

Extensive loss of bone, either labial or palatal, can have a number of causes. Deficiencies are traditionally classified based on aetiology:

These are discussed below and their relevance to clinical implant dentistry addressed.

Congenital deficiencies that result in discontinuity of hard and soft tissues, such as a cleft palate, are best treated by clinicians who have experience of such repairs. Subsequent treatment with implants can provide these patients with excellent function.

Congenitally missing teeth can result in inadequately developed alveolar processes and, as a result, may require bone-grafting procedures. These respond well to treatment when implants are used to provide functional stimulus to the reconstructed ridges.

Implant dentistry has contributed significantly to the rehabilitation of patients who have undergone ablative surgery.13 The use of implants in conjunction with bone grafts, in particular free vascularised grafts, significantly improves the quality of life for these patients and the overall outcome of the treatment at the same time. Complex treatment, often involving radiation, hyperbaric oxygen therapy and other treatments with a much higher risk of complications, should be carried out only at appropriately equipped hospitals (Fig 11-1). 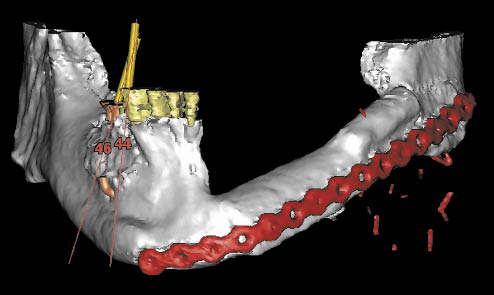 Deficiencies resulting from trauma can vary in size and complexity. Trauma can result merely in tooth loss or the loss of alveolar bone, resulting in hard and soft tissue deficiencies. The corrective treatment will depend upon the type and size of defect.

Infection is the most common cause of tooth loss and may present itself as caries, leading to periapical infection, or periodontal disease. Vertically fractured roots following endodontic treatment and/or post-crowns may result in substantial loss of bone. Failure of implants as a result of peri-implantitis or failure of grafts causes extensive loss of bone. This bone loss necessitates repair as, depending on the type of deficiency, spontaneous repair may not occur.

Periodontal disease is characterised by bone loss and may present itself as an infrabone deficiency around a specific tooth, which may repair itself on elimination of the cause or extraction of the tooth. Extensive periodontal disease may result in loss of height of the alveolar process (horizontal bone loss) around the infected teeth.

Regaining the ridge form following the loss of teeth requires autogenous onlay grafts or other supplementary procedures, which make the treatment more exacting as the alveolar ridge height is more difficult to reconstruct.

Persistent treatment – contrary to current data on the success of that treatment modality – should not be carried out if it leads to greater tissue loss. Evidence-based guidelines should be established in order to enable clinicians to make decisions that prioritise the preservation of those tissues that are most difficult to replace.

The decision-making process must take into account the consequence of any treatment that may result in further bone loss. Typically, re-treatment of endodontically treated teeth with periapical lesions and post-crowns should be reconsidered. Consideration should also be given to the persistent treatment of periodontally involved teeth with progressive bone loss.

Substantial progressive bone loss has been recorded associated with implant designs employing porous surfaces such as beads, hydroxyapatite and titanium plasma flame-sprayed coatings. Other causes may relate to known periodontal risks such as environmental (e.g. smoking), host (genetic disposition) or bacterial factors. The use of biomaterials in conjunction with implants placed into existing bony defects may also increase the risk of infection. Inappropriately placed biomaterials into extraction sockets (e.g. infected sockets or dense packing of material) may also result in infection, causing bone loss extending into the base of the defect (Figs 11-2–11-4). 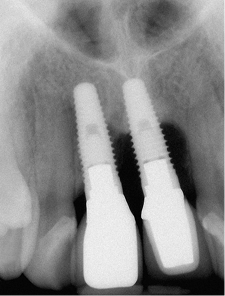 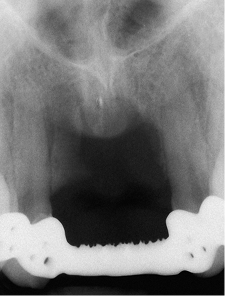 Fig 11-3 Buccal and palatal bone loss is evident. A large block graft will be required to repair the deficiency. 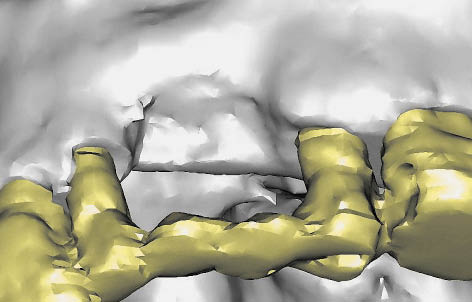 Fig 11-4 A 3D CT scan reconstruction of a maxillary deficiency caused by failure of implants.

The indication for either manipulation or augmentation may entirely be aesthetics. In such cases, relating the position of the tooth to the ridge form is fundamental to the assessment process. This is often the case in the anterior maxillary region, which is very visible. Grafting may be necessary even though there may be sufficient bone to meet biomechanical demands. There are, of course, many situations where there are multiple indications.

Biomechanics is often a matter of counter-balancing load with support and there are many complex factors that influence both of these. There is now information that will provide guidance in clinical decision making, the details of which are beyond the scope of this text. Each clinician must make these judgements based on experience and evidence.

Load is also influenced by the region of the mouth that is to be restored. Forces that are up to eight times greater in magnitudes may be generated in the molar region than in the anterior region.

Various studies have shown that the load is influenced by the shape of the jaws and the size of the muscles. These should, therefore, be considered within the decision-making framework.

The volume and nature of the bone that will receive the implant will have to resist the forces exerted. Bone is a living tissue that constantly remodels throughout life and, therefore, influences the long-term stability of the osseointegrated implant. The remodelling process itself depends on local and systemic factors.

Mechanical load is one of the local factors influencing the remodelling process. The amount of load that is distributed to the bone is influenced by the surface area of the implant in contact with the bone, which, in turn, is influenced by the bone density. The nature of the load, be it compressive, tensile or shear, will have an impact on bone response. It is recognised that several thresholds exist that govern the response of bone to load. The first threshold defines the point when stimulation of the bone sustains density; the second increases density and the third results in micro-fractures, which may lead to loss of bone integrity.

The remodelling of bone is also governed by metabolic factors. A number of hormones, such as adrenocorticosteroids, calcitonin, parathormone, growth hormone and insulin, influence bone metabolism. Several diseases and malfunctions of certain organs, such as renal and hepatic disorders, also affect bone metabolism, as do dietary factors. Drugs such as bisphosphonates influence bone metab­olism, with potentially serious risks. Assessment of the general medical condition of the patient is, therefore, fundamental.

Finally, the gross morphology and mechanical and chemical nature of the implant surface will have an effect on the quality of the bone–implant interface that can be generated.

Once the presence of a deficiency has been identified, a decision will need to be made regarding the need to alter the shape of the ridge. The nature of the procedure that is carried out must depend upon the goal that needs to be achieved. This may, in principle, be considered in two separate categories: manipulation of hard and soft tissues and grafting of hard and soft tissues. In addition, synthetic/alloplastic materials are used for augmentation.

Manipulation of Hard and Soft Tissues

Manipulation procedures alter the position or dimension of the tissues that are already present at a particular site. Examples include:

The key principle with tissue manipulation is to maintain sufficient blood supply to the tissues being manipulated, so that vitality and function are sustained. This differs from other augmentation procedures, where a blood supply needs to be re-established.

This general principle applies to all the manipulation procedures listed above.

For bone expansion, it is fundamental to maintain a blood supply to the labial cortical plate and to avoid displacement fractures, which would make the bone more susceptible to resorption and possibly sequestration. It is for this reason that the periosteum is not elevated from the labial plate.

The technique for distraction osteogenesis depends upon soft tissue incisions designed to maintain the blood supply to the segment being transported. This is commonly the palatal or lingual soft tissues. Vio­lation of this bas/>