I. Background and Rationale

Human immunodeficiency virus (HIV) is the etiological agent for acquired immune deficiency syndrome (AIDS). HIV is a retrovirus in the Lentivirus group.

The 2008 Centers for Disease Control and Prevention (CDC) definition of HIV and AIDS for public surveillance1 is based on the laboratory evidence of HIV-1 or HIV-2 infection, the CD4 cell count, and the presence of AIDS-defining conditions outlined in the 1993 case definition.2 See Table 11.1. Patients with laboratory-confirmed HIV infection may be in one of four HIV infection stages: Stage 1, 2, 3/AIDS, or unknown.

a  Every effort should be made to report CD4+ T-lymphocyte counts or percentages and the presence of AIDS-defining conditions at the time of diagnosis.

b  Documentation of an AIDS-defining condition supersedes a CD4+ T-lymphocyte count of ≥200 cells/µL and a CD4+ T-lymphocyte percentage of total lymphocytes of ≥14. Definitive diagnostic methods for these conditions are available in Appendix C of the 1993 revised HIV classification system and the expanded AIDS case definition and from the National Notifiable Diseases Surveillance System.

Once transmission of HIV occurs, the retrovirus enters human cells, particularly the CD4+ (T-helper) lymphocytes in the peripheral blood and undergoes replication. Additional HIV virus is created and returned to the circulation, ultimately destroying the lymphocyte in the process. CD4+ lymphocyte depletion results in compromise of the host cell-mediated immune response.

Primary or acute infection and seroconversion usually occur without the display of any signs or symptoms; however, a small number of patients may experience a viral syndrome similar to the flu. In the next 6 months, HIV-specific antibody responses can be detected by standard HIV antibody tests. During the clinically latent or asymptomatic period of months to years, viral replication continues but the patient experiences few or no symptoms of HIV disease. Without medical intervention, eventually viral replication overcomes the host immune response and CD4+ counts begin a progressive decline. The immune system deteriorates, and patients become increasingly susceptible to opportunistic infections such as oral candidiasis and the most common AIDS-defining condition, Pneumocystis carinii pneumonia (PCP). Death may ensue in 2–3 years following diagnosis with an AIDS-defining illness if medical care is not accessed or effective at halting disease progression.

In June 1981, five previously healthy young men in Los Angeles, CA, with PCP, two of whom had died, were the first cases of HIV/AIDS reported in the world. Thirty years after this, the U.S. CDC reported that there are an estimated 33.3 million people living with HIV infection worldwide at the end of 20093:

While many HIV-infected patients will be aware of their serostatus, some will be unknown to the dentist because they are asymptomatic, have no physical signs and are unaware that they are seropositive, or withhold that information. A history of AIDS or HIV seropositivity may be supplied by the patient, or HIV infection may be suspected on the basis of the medical history or physical examination.

Affirmative responses to confidential medical and social history questions in the following areas will alert the dentist to the possible need for further inquiry:

The physical examination is important in identifying and monitoring orofacial conditions that may be associated with HIV infection.6

If the history or physical examination suggests the possibility of undiagnosed HIV infection, the provider should coordinate care with the primary care physician for a complete medical evaluation and laboratory testing.

HIV testing and referral are recommended for patients whose medical history or oral examination reveals the possibility of HIV infection. Early HIV detection and access to HIV medical care and ART can improve the quality and prolong the life span of the patient, as well as help to prevent future virus transmission.

HIV testing should be done only in conformity with state laws regarding the legality and confidentiality of such testing. The medical, social, and legal implications of an HIV antibody test are extensive, and therefore, pre- and posttest patient counseling may be required. The practitioner ordering the test must assure that any necessary written informed consent is given, that precounseling is done before the test is taken if required by state law, that state reporting and contact tracing laws, if any, are followed and that further counseling and referral are available at the same time that the test results are disclosed to the patient.

To aid in HIV prevention efforts, the CDC revised its guidance to make HIV antibody testing routine in all health-care settings under general consent for medical care, unless the patient declines (opt-out screening), with prevention counseling no longer required7:

Several HIV test technologies have been ap­proved by the U.S. Food and Drug Administration that vary by fluid tested (whole blood, serum, plasma, oral fluids, and urine) and time required to run the test (conventional vs. rapid tests). Testing options facilitate access to testing and increase acceptability of testing.

The OraQuick ADVANCE® Rapid HIV-1/2 antibody test (OraSure Technologies, Inc., Bethlehem, PA) is a way to measure HIV-antibody response in oral mucosal exudate in 20 minutes and can be used in the dental office. See Fig. 11.1. 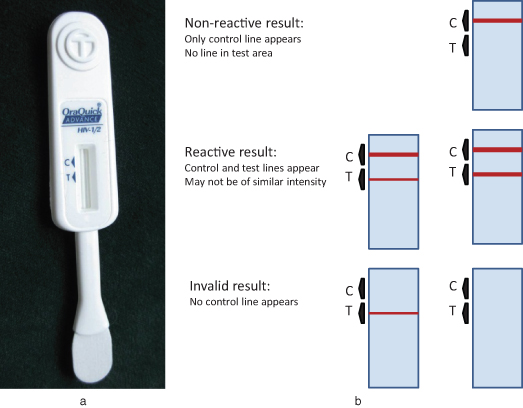 In patients who are HIV positive, routine hematological tests are often assessed, which include

While all values may be suppressed, particularly in advanced AIDS, it is rare that the values are suppressed to critical levels that would require medical management or transfusion prior to dental surgical procedures.9 When this is the case, the patient is likely to report thrombocytopenia or severe neutropenia on the health history.

The goals of medical treatment are to decrease the viral load, increase the patient’s immune competence, and treat or prevent opportunistic infections. ART currently includes the following five drug classes:

Currently, a standard ART regimen does not exist, and therefore, a regimen consists of a combination of drugs from different classes typically referred to as highly active antiretroviral therapy (HAART).10 The parameters used to develop a regimen for individual patients include viral load levels and CD4+ count, and drugs are selected in combination to interfere with multiple stages of HIV replication. In an effort to identify antiretroviral drug-resistant HIV strains and to assist in drug selection, genotyping and phenotyping may be performed.

The HIV-infected patient should have a comprehensive dental evaluation that includes a complete radiographic examination. Particular attention should be given to detecting the presence of orofacial manifestations associated with HIV infection. The examination should be done with consideration of the patient’s immunological and hematological status and general medical condition.

Key questions to ask the patient

Key questions to ask the physician

With these key questions answered and appropriate modifications taken, HIV-infected patients can safely receive dental care. The patient’s “chief complaint” should be addressed promptly with infection eliminated and preventive habits established. Maintaining gingival and periodontal health may help to prevent the rapid forms of periodontal destruction that may occur with immune suppression. Appropriate emergency treatment should be rendered and pain relieved in all stages of the disease.

The majority of HIV-infected patients will be medically healthy, thus requiring little or no modification of dental treatment. With ad­vanced HIV disease, timing or extent of the dental treatment plan may need to be modified according to the immunological and hematological status and general medical condition of the patient. Fatigue during prolonged procedures may be experienced by patients with significant anemia. The frequency of follow-up dental appointments should be arranged on an individualized basis in order to closely monitor oral health.

Coinfections of Concern to Dentistry

TB is spread by airborne transmission, particularly in closed spaces, of Mycobacterium tuberculosis. People coinfected with HIV and TB have a substantially increased risk of developing active TB compared with the 5% early and 5% late risk for immune-competent persons without HIV infection. Longer courses of therapy and prophylaxis are recommended for HIV-infected patients with TB.

All HIV-infected persons should be given a tuberculin skin test.11 The Mantoux skin test should be repeated annually along with anergy testing, using control allergens such as tetanus or Candida, because anergy is more common in individuals with reduced CD4 counts.

The dental team should be alert to possible signs and symptoms of TB including general symptoms of fatigue, malaise, weight loss, fever, and night sweats as well as pulmonary symptoms of prolonged coughing or coughing up blood. Referral to a physician for evaluation and needed treatment prior to elective dental care is recommended. Patients should not receive elective dental care until they are noninfectious. A definitive noncontagious status can be confirmed by three consecutive negative sputum cultures for acid-fast bacilli. Emergent dental care should be provided in a facility that has the capacity for airborne infection isolation and has a respiratory protection program in place.

Due to similar routes of transmission, there is an increased prevalence of HBV/HCV infection among those with HIV, with HCV found in approximately one-third of all HIV-infected people in the United States.12 HBV or HCV infection may impact the course and management of HIV disease by increasing the risk of ART-induced hepatotoxicity. HIV coinfection is associated with higher HCV viral loads and a more rapid progression of HCV-related liver disease, which leads to an increased risk of cirrhosis.

Viral hepatitis that is sufficiently severe to result in liver dysfunction, will lead to altered drug metabolism and coagulopathies. Patients with significant liver disease may require additional coagulation laboratory tests such as the prothrombin time/international normalized ratio (PT/INR) and partial thromboplastin time (PTT) to assess function of the liver-dependent coagulation Fac­tors II, VII, IX, and X, and liver function tests to gauge the ability of the liver to metabolize drugs.

A number of oral lesions have been associated with HIV disease.6,13 Suggested drug treatment regimens for several common or severe oral conditions are presented in Table 11.2. Oral candidiasis is the most frequently occurring oral manifestation of HIV. It indicates an increased risk of HIV disease progression and is associated with reduced CD4+ counts. Oral hairy leukoplakia is considered the second most common oral lesion among HIV-seropositive adults. Prevalence of oral lesions associated with HIV varies across study population, with most HIV-infected adults having oral candidiasis and/or hairy leukoplakia at some point during the course of disease progression. Among HIV-infected children, oral candidiasis, aphthous stomatitis, parotid gland enlargement, and linear gingival erythema may occur. The use of HAART has improved the immune competence of individuals with HIV and thus decreased the prevalence of most oral mucosal diseases.