The oral cavity contains many anatomical structures besides the teeth, and to gain a full ­understanding of the topics of oral health and disease, the dental nurse must have knowledge of all these structures. The bones, muscles, nerves and blood supply to this region are discussed in Chapter 9; this chapter will focus on the following specific anatomical structures and their physiology.

Soft tissues of the mouth

The whole of the mouth is lined with epithelial mucosal tissue as a type of mucous membrane, which is continuous with that lining the digestive tract. Throughout the oral cavity there are three types of this membrane, each with its own particular features.

Their details are shown in Table 10.1. The first row identifies the area of the oral cavity where each type of epithelial membrane is normally found, while the second row describes its appearance in each case. The final row explains the function(s) of the membrane in relation to its appearance – so the ridged nature of the masticatory membrane, for example, and its firm underlying attachment are explained by its function of providing a hard-wearing surface that can withstand the regular abrasive contact it has with food.

Within the oral cavity, the space between the posterior teeth and the mucous membrane lining the cheeks is called the buccal sulcus whilst that between the anterior teeth and lips is the labial sulcus. The upper lip is attached to the centre of the gingiva above the central incisors by a band of fibrous tissue called a frenum, and when this attachment is thicker than usual, there is often a space created between the two incisor teeth, called a median diastema. 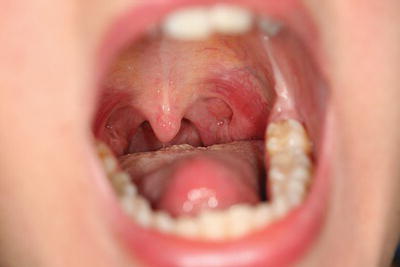 The soft palate is a flap of soft tissue attached to the back of the hard palate. Its function is to seal off the oral cavity from the nasal cavity during swallowing, in order to prevent food passing up into the nose. The free edge of the soft palate has a central prolongation called the uvula. You can see this for yourself by looking in a mirror with your mouth wide open. To either side of this area at the back of the mouth, called the oropharynx, lie the tonsils which appear as small ball-like structures with a pitted surface (Figure 10.1). They are most noticeable when inflamed during a throat infection, such as tonsillitis.

The floor of the mouth lies within the arch of the mandible and is occupied by the tongue, which is a muscular organ situated in the oral cavity and also the throat. The posterior one-third section, the base of the tongue, lies in the throat and attaches to the floor of the mouth. It is relatively firmly attached and is mainly concerned with swallowing movements. The correct term for swallowing is deglutition.

The remaining anterior two-thirds of the tongue, the body, lie within the oral cavity and this section is relatively moveable, being able to perform numerous convoluted movements, as it is composed of many bands of muscle lying in various directions. It is attached to the floor of the mouth by a thin band of fibrous tissue called the lingual frenum. Where excess of this fibrous tissue occurs, the tongue is held more rigidly than normal so that its movements are restricted, and the person affected is often described as ‘short-tongued’ or ‘tongue-tied’, due to the lisp ­created as they speak.

The body of the tongue is concerned with taste, chewing activities and speech.

All the muscles of the tongue are innervated by the hypoglossal nerve (12th cranial nerve).

The functions of the tongue are as follows. 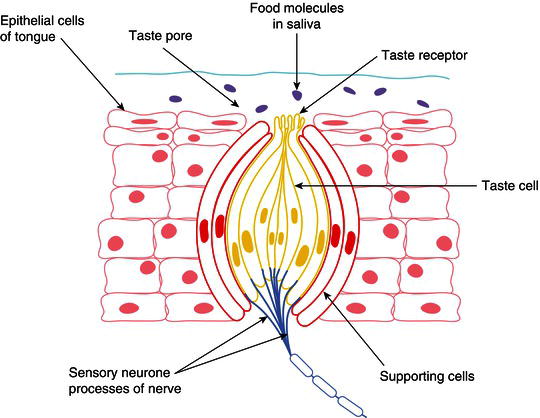 The lining epithelium of mucous membrane covering the underside of the tongue is so thin that it allows the very rapid absorption of drugs placed here into the underlying capillaries of the tongue. Patients given glyceryl trinitrate (GTN) tablets or spray for the treatment of angina pectoris use their medications in this way.

Swallowing is a complex muscular action which aims to direct the food bolus into the oesophagus while also preventing it from entering the nasal cavity or the larynx. The bolus is mixed with saliva to lubricate it, and then propelled by the tongue from the mouth to the oropharynx, and then into the oesophagus. The sequence of events in the swallowing process is as follows (see Figure 5.11).

Disorders of the tongue

This is soreness and inflammation of the tongue, and can occur in conditions such as anaemia, vitamin B deficiency and hormonal disturbances (including pregnancy). It is associated with a thin, smooth glazed appearance of the normally thick layer of mucous membrane on its upper surface.

This is the condition of having difficulty in swallowing, which occurs relatively frequently and has several causes.

The teeth are the anatomical structures within the oral cavity that are of the greatest relevance to the dental team, as their development, health, disease and restoration are the fundamentals of dentistry. The teeth have the following functions.

Humans have two sets of teeth – the primary (deciduous) teeth of childhood and the secondary (permanent) teeth of adulthood. The number and type of teeth in each set differ, although the shape of the common ones is the same.

The detailed anatomical shape of each tooth, and its function, is called tooth morphology.

The four types present in the secondary dentition, from the midline of the mouth posteriorly, are as follows.

The primary dentition has just two molars and is made up of just three different types of teeth – there are no premolars present. 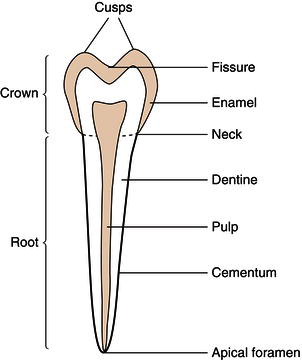 Each tooth of all types, and in both sets, has three sections – the crown, the neck and the root(s). The crown is the section of the tooth visible in the oral cavity, following its eruption from the underlying alveolar bone. The neck is the section where the tooth and the gingival tissues are in contact with each other at the point where the tooth emerges through the gums, and the root is the (usually) non-visible section that holds the tooth in its bony socket.

All teeth are composed of the same four tissues.

The structure of a typical tooth is shown in Figure 10.3.

Microscopic structure of the teeth

The differences in the microscopic structure of the four layers of the teeth are what determine how they function, how they develop disease, how they are treated for that disease, and how they are restored or extracted by the dental team.

This is the highly calcified, protective outer covering of the crown and is the hardest substance in the body. Its properties and microscopic structure are as follows.

This tissue forms the main bulk of a tooth and occupies the interior of the crown and root. It is also mineralised, but to a lesser extent than enamel, and is covered by enamel in the crown of the tooth and by cementum in the root of the tooth. Its properties and microscopic structure are as follows.

This is the calcified protective outer covering of the root and is similar in structure to bone. Cementum meets enamel at the neck of the tooth, and normally lies beneath the gingivae. Its properties and microscopic structure are as follows.

Unlike enamel, dentine and cementum, the pulp contains no mineral crystals and is composed purely of soft tissue. It lies within the very centre of every tooth, from the crown as the coronal pulp and into each root as the radicular pulp. The radicular pulp is often referred to as the ‘root canal’ of the tooth. The properties and microscopic structure of the pulp are as follows.

All people have two sets of teeth: the first or deciduous teeth, and the second or permanent teeth. All have different appearances or morphology, which depends on the set and the individual teeth themselves. Their morphology enables each tooth to be individually identified by any trained/>