About 20 years ago, the first fabrication of endodontic instruments from nickel-titanium alloys (NiTi) set in motion a development that fundamentally changed root canal instrumentation forever (Walia et al., 1988). The 55-Nitinol (approximately 55% Ni and 45% Ti) still contained traces of iron (Fe) and cobalt (Co). It was characterized by pseudoelasticity. After loading and unloading, it returns to its initial shape (“memory effect”); however, in the phase change, NiTi exhibits hysteresis with dissipation in contrast with the usual elasticity.

There are other “memory” alloys that undergo a diffusionless phase change (e.g., CuZnAl, AuCd). This phenomenon also occurs during the hardening process of steel: On rapid cooling from a high temperature, carbon (C) has insufficient time to undergo diffusion and atomic rearrangement of the cubic, surface-centered austenitic form, and instead it assumes a body-centered tetragonal structure with volume change. This diffusionless change is referred to as “martensitic change,” named after its discoverer, Adolf Martens (Director of the Materials Test Center, Berlin, 1850–1914). 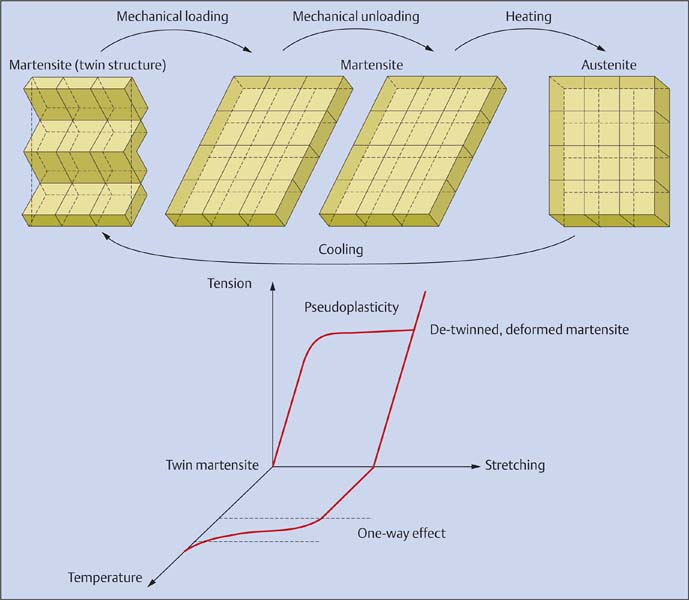 On the basis of the principle of oneway effect, the macroscopic similarity of the twin form of martensite (left) with the austenite form (right) has been exploited. Pseudoplastic deformation occurs as the twin crystals of martensite are deformed in a predestined direction without breaking (middle). Heating leads to conversion to austenite, and renewed cooling results in transformation into martensite (adapted from D. Helm).

NiTi exhibits virtually no change in volume on cooling and heating, because the twinned martensite and austenite phases are virtually identical in macroscopic measurements. The biocompatibility of Nitinol is very good (Ryhanen et al., 1999), and it is used extensively in medicine and dentistry today. The high content of nickel is apparently not problematic because it is bound to the titanium and therefore does not elicit any of the known nickel allergies (Schäfer, 2002a). However, the manufacturing process is difficult and expensive, and previously often led to inconsistencies.

The low hardness (HV 300–360) and the resultant low cutting efficiency of NiTi in contrast with stainless steel (HV 520–540) are outweighed by the ability to use it with a rotatory motion. However, the lower cutting efficiency of NiTi files also means reduced longevity. To counteract this disadvantage, various groups have attempted to improve the surface qualities of instruments, by using nitrides, bromides, or nitrogen ions (Lee et al., 1996; Rapisarda et al., 2000, 2001). Using the technique of physical vapor deposition Schäfer (2002b, c) applied a titanium nitride layer, which led to improved cutting efficiency.

Left: When a NiTi file is bent, it returns to its original shape and position (Schäfer, 2002a).

Right: In contrast, if a steel file is bent, the result is a permanent, plastic deformation (Schäfer, 2002a, with permission). 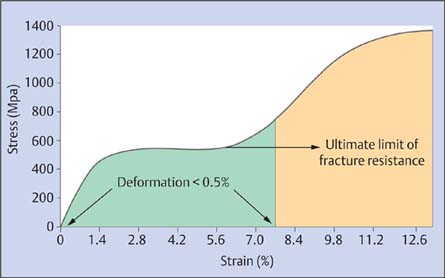 Owing to the special property of superelasticity, NiTi instruments can withstand twisting up to 8% without incurring any permanent deformation (left plateau). Furthermore, deformations up to 12% do not necessarily lead to instrument fracture, but ultimately lead to the point of potential fracture (Thompson, 2000, with permission). 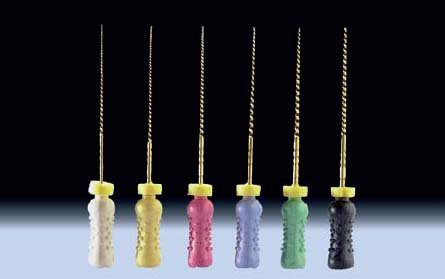 Attempts to enhance the surface stability have, to date, often only been of experimental nature. The few instruments available to date include the Naviflex TiN files. In the technique developed by Schäfer (Münster), the PVD coating with titanium nitride enhances the file hardness and resistance to abrasion. (Reamers, H files and—as depicted here—K files: Brasseler, Lemgo, Germany).

Permanently rotating instrumentation using NiTi files has been in vogue for almost two decades. But the period of development of such files has a much longer timespan. Walia et al. (1988) initiated the development by imitating the shape of a K file.

The first commercially available systems—LightSpeed, Mity Roto, ProFile, and Power-R—had flattened cutting edges (“radial lands”), and there was initially some fear that these edges would cut too quickly into dentin, leading to wedging and finally to instrument fracture. In fact, this fear was substantiated by subsequent studies of fracture rates (Baumann and Roth, 1999).

The file tip and the cutting edges were first rounded to provide a non-cutting pilot tip or a “safety” tip. Over time, other, more active, shapes were developed. The aggressive cutting by the earliest Quantec files (wedge-f/>