10: Nasal Airway Considerations in the Evaluation and Treatment of Dentofacial Deformities

Nasal Airway Considerations in the Evaluation and Treatment of Dentofacial Deformities

• The Effects of Respiratory Pattern and Jaw Posture on Maxillofacial Growth

• Approaching the Nasal Airway Through Le Fort I Down-Fracture

The efficiency of care for the individual with a dentofacial deformity requires the collaborative management of any presenting upper airway obstruction, facial dysmorphology, and malocclusion or dental rehabilitative needs. At the time of orthognathic surgery, the surgeon has an opportunity to further contribute to the patient’s quality of life by seamlessly addressing any longstanding breathing and sinus drainage difficulties that coexist with the jaw deformity. Breathing difficulties may range from isolated symptomatic nasal airway obstruction to obstructive sleep apnea and should not be overlooked. The impact and frequency of the combined occurrence of nasal obstruction, sinus disease, and maxillary deformity have been recognized and discussed in established literature for well over 100 years:

“Irregularities of the teeth being so frequently associated with some pathologic obstruction of the nasal passages or nasopharynx, this fact should ever be present in the operator’s mind and suitable examination being made; and in case [as is often found] the oral deformity be complicated by the presence of hypertrophied faucal tonsils, adenoid hypertrophies in the vault of the pharynx, or obstruction of the nasal passages, the orthodontist’s work can only be made complete by the assistance of a rhinologist and laryngologist.”2

Nasal septoplasty is a generic descriptor of the surgical correction of septal thickenings and deflections frequently carried out to improve nasal airflow and sinus drainage (Figs. 10-1 and 10-2).3,7,20,30,52,53,57,75,80,88,89,91,93,94 Enlarged inferior turbinates also commonly obstruct nasal breathing and interfere with sinus drainage (Fig. 10-3). Hypertrophic inferior turbinates that are only minimally responsive to medical treatment are best managed by partial (surgical) reduction.8,23,77 A tight nasal inlet or constricted pyriform apertures occur in conjunction with a narrow maxillary arch (Fig. 10-4).58,86,90,95 An elevated floor of the nose is a frequent finding in the presence of anterior vertical maxillary excess (i.e., long face growth pattern) (Fig. 10-5).63,81,112 A scarred nasal vestibule seen with a repaired cleft nasal malformation may be another cause of persistent nasal obstruction (Fig. 10-6). Nasal septal deformities, inferior turbinate enlargement, a tight nasal inlet, and an elevated nasal floor all commonly coexist with maxillary deformities (Figs. 10-7 and 10-8).1,12–14 Favorable access to the nasal septum, the inferior turbinates, the pyriform apertures, and the nasal floor to correct these airway obstructions and deformities is possible through the Le Fort I down-fracture osteotomy that is commonly used in orthognathic surgery (Figs. 10-9, 10-10, and 10-11).82–85 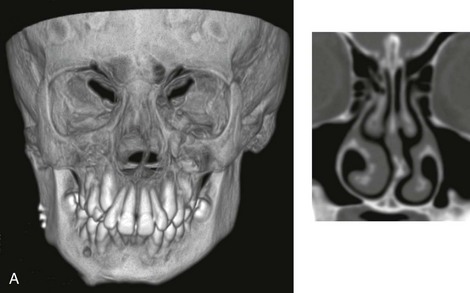 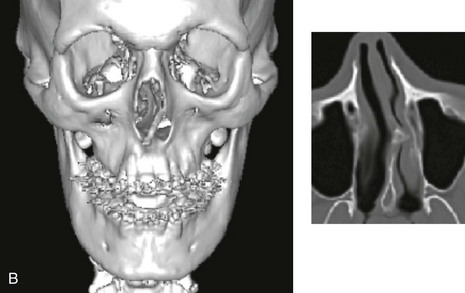 Figure 10-2 Sagittal midfacial illustration and coronal section computed tomography scan view of the skeletal (vomer and perpendicular plate of ethmoid) and cartilage (quadrangular) components of the septum of the nose. The computed tomography scan view indicates deviation and buckling of the septum, which obstructs the left side of the nose. Modified from an original illustration by Bill Winn. 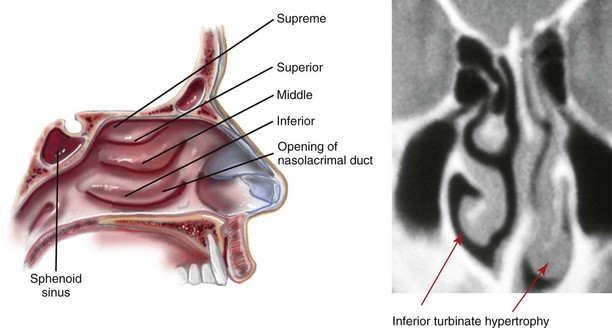 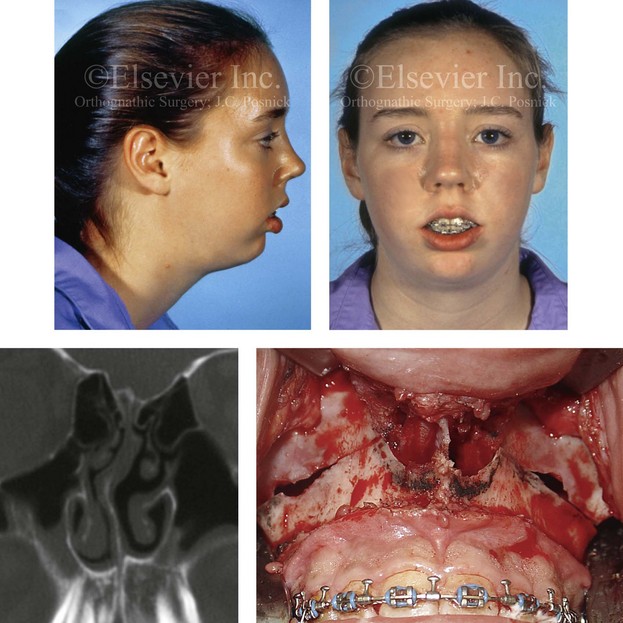 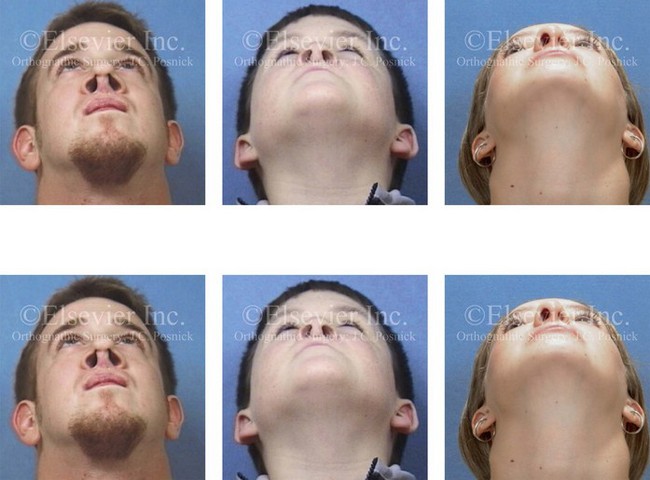 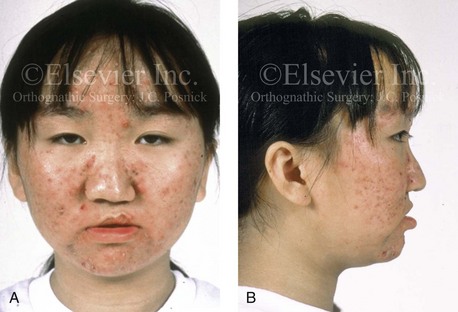 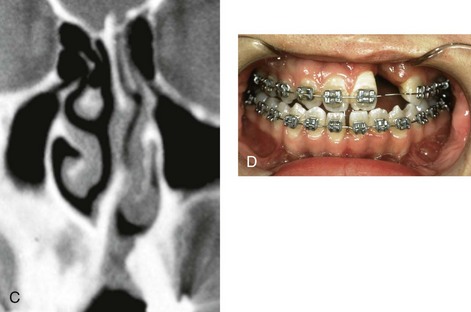 Figure 10-7 A and B, A teenage girl with unilateral cleft lip and palate shows multiple causes of nasal obstruction. These include—as shown in C and D—septal deviations, inferior turbinate hypertrophy, nasal aperture narrowing, and nasal floor deformities, including a residual unrepaired alveolar cleft. 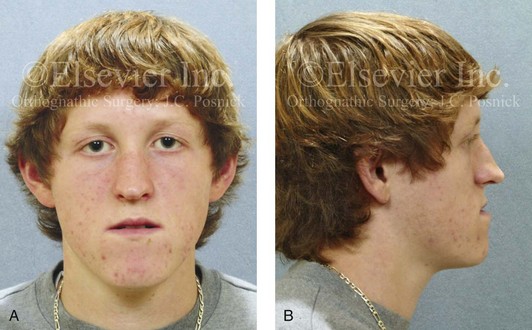 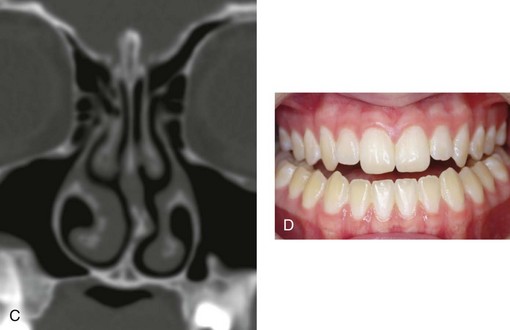 Figure 10-8 A and B, A teenager with a maxillary deficiency and a relative mandibular excess growth pattern. C and D, The physical findings of septal deviations, inferior turbinate hypertrophy, and a narrow (tight) nasal aperture are consistent with the patient’s history of nasal airway obstruction. 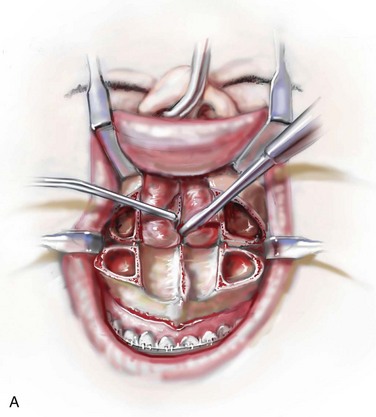 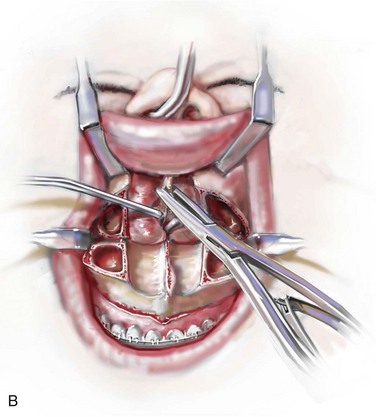 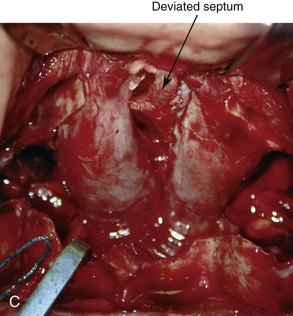 Figure 10-9 Illustrations and intraoperative view of a deformed nasal septum seen through a Le Fort I down-fracture. This is a demonstration of the technique used to carry out the submucous resection of septal bone and cartilage. When indicated on the basis of the patient’s history and clinical examination, attention is turned to the removal of the deviated portions of the septum of the nose. A, With an elevator, the submucosal dissection of the cartilaginous (quadrangular cartilage) and bony (vomer and perpendicular plate of ethmoid) septum is carried out. B, The deviated and thickened aspects of the cartilaginous and bony septum are resected with a rongeur. The more anterior components of the cartilaginous septum that provide needed support to the nasal dorsum and tip are not disturbed. This includes at least 1 cm of the dorsal and caudal cartilage. C, An intraoperative view through a Le Fort down-fracture shows a deviated septum. 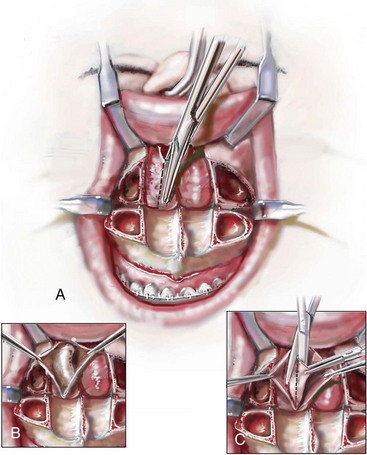 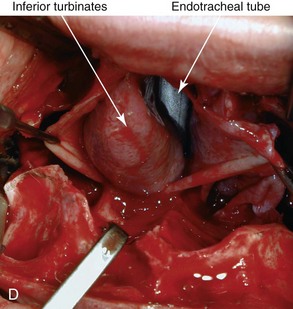 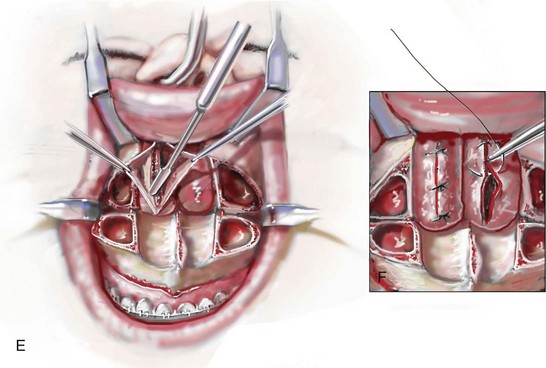 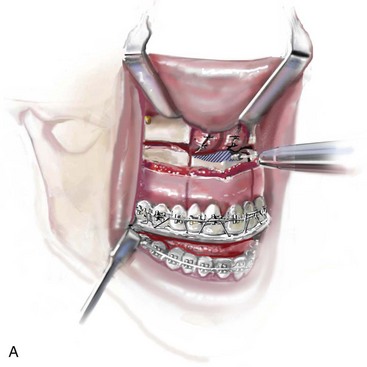 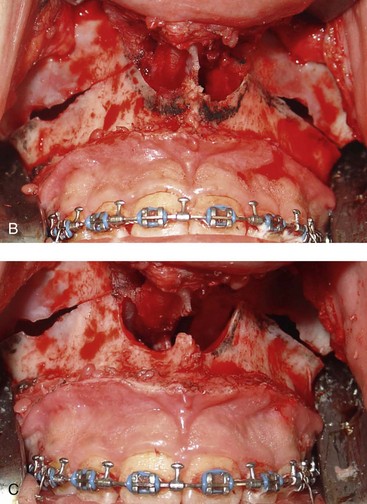 Maxillofacial literature has traditionally addressed aspects of nasal obstruction, nasal anatomy, and sinus drainage in the patient who is undergoing orthognathic surgery, but often only in subjective and limited ways.8,18,24,27,32,33,36,38,55,56,71,73,74,76,103,104,107 Authors traditionally discuss the effects of Le Fort I osteotomies on nasal morphology (i.e., aesthetics) and occasionally recommend adjunctive soft-tissue techniques in the hopes of limiting suboptimal aesthetics (e.g., the alar cinch stitch).37 Little consideration is given to either baseline upper airway findings or how the maxillary surgery may affect long-term nasal breathing. Warren and colleagues discusses issues of nasal airway changes after Le Fort I osteotomy with maxillary impaction, advancement, and transverse widening.108 They used a pressure flow meter to assess nasal airway breathing before and after maxillary osteotomies.21,29 Turvey and colleagues recognized preexisting nasal obstruction in many of their orthognathic patients.103 They suggested methods of avoiding adverse effects on nasal airway resistance that may result from Le Fort I maxillary osteotomy procedures.104 Moses and coworkers reported about a series of patients who were treated for nasal obstruction and sinus drainage difficulties after Le Fort I maxillary procedures were carried out for long face growth patterns (e.g., vertical maxillary excess with anterior open bite).71 They concluded that Le Fort I impaction frequently aggravates preexisting nasal airway obstruction and sinus disease. Williams and colleagues examined the nasal airway function (breathing) in a consecutive series of subjects (n = 50) before and 5 months after undergoing (1) Le Fort I osteotomy with advancement and vertical lengthening (2) maxillary segmentation with transverse expansion (14 of 50 subjects, 28%); and (3) recontouring of the nasal floor and pyriform rims with a rotary drill. Despite these favorable nasal airway surgical maneuvers, when ignoring potential pathology of the septum (e.g., buckling and deviation) and the inferior turbinates (e.g., hypertrophy/enlargement), a full 20% of their study subjects experienced a worsening of their nasal airway function after surgery.113a

Unfortunately, in the individual with a dentofacial deformity, a methodic approach to the evaluation and management of chronic nasal airway obstruction at the time of orthognathic surgery is often not undertaken. We suggest that any upper airway obstructions be assessed by the orthognathic surgeon with the same vigor as the effects of the presenting jaw deformities on malocclusion are evaluated (Figs. 10-12 and 10-13).51,83–85,87 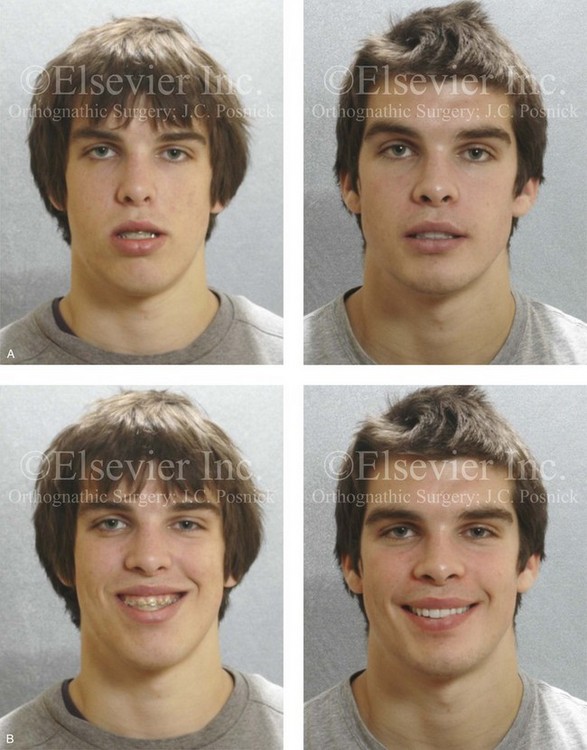 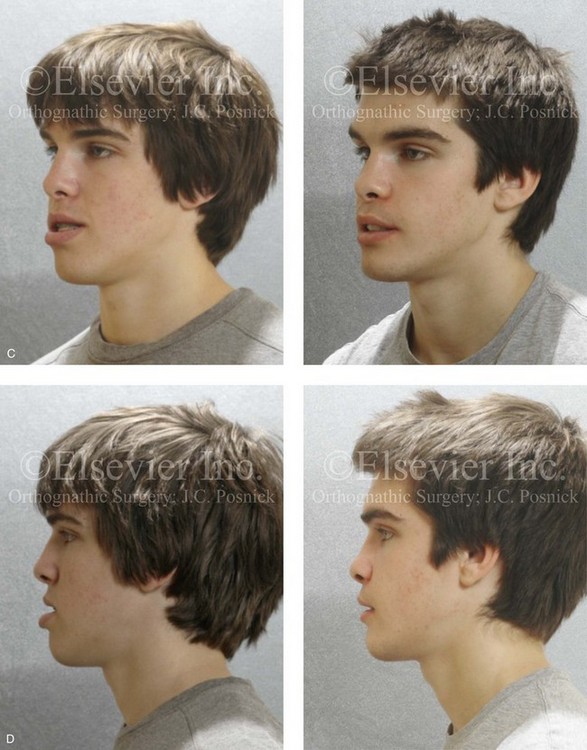 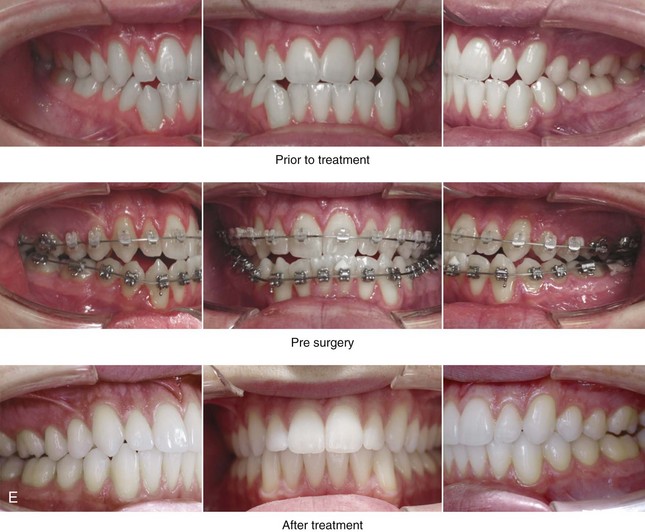 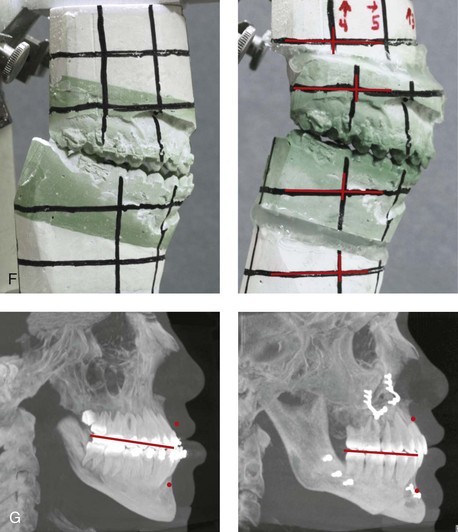 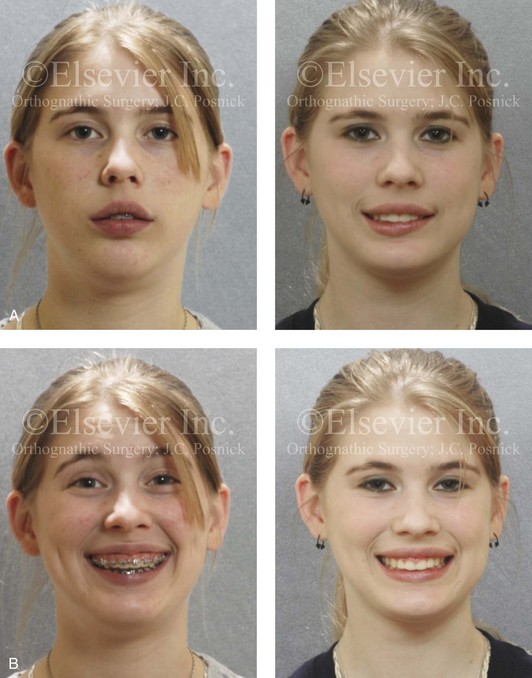 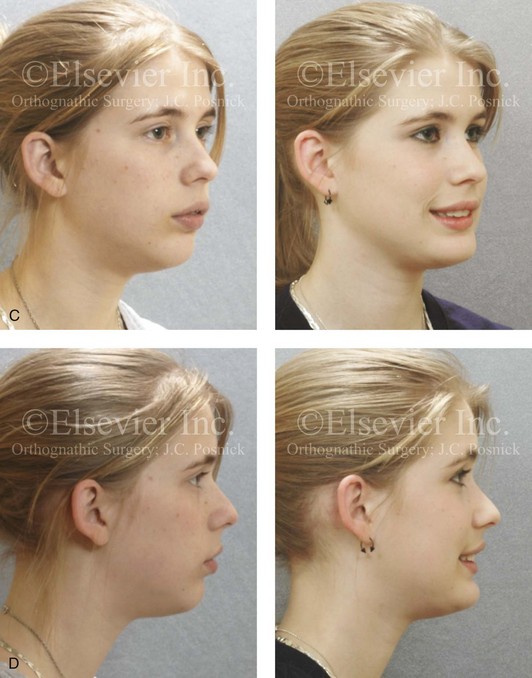 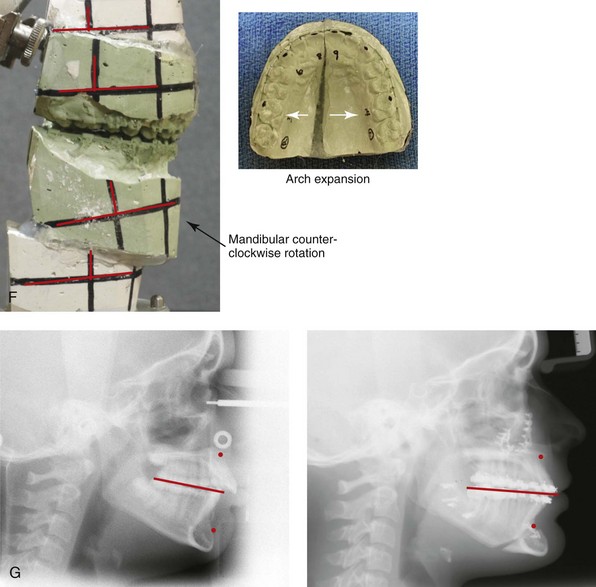 The Effects of Respiratory Pattern and Jaw Posture on Maxillofacial Growth