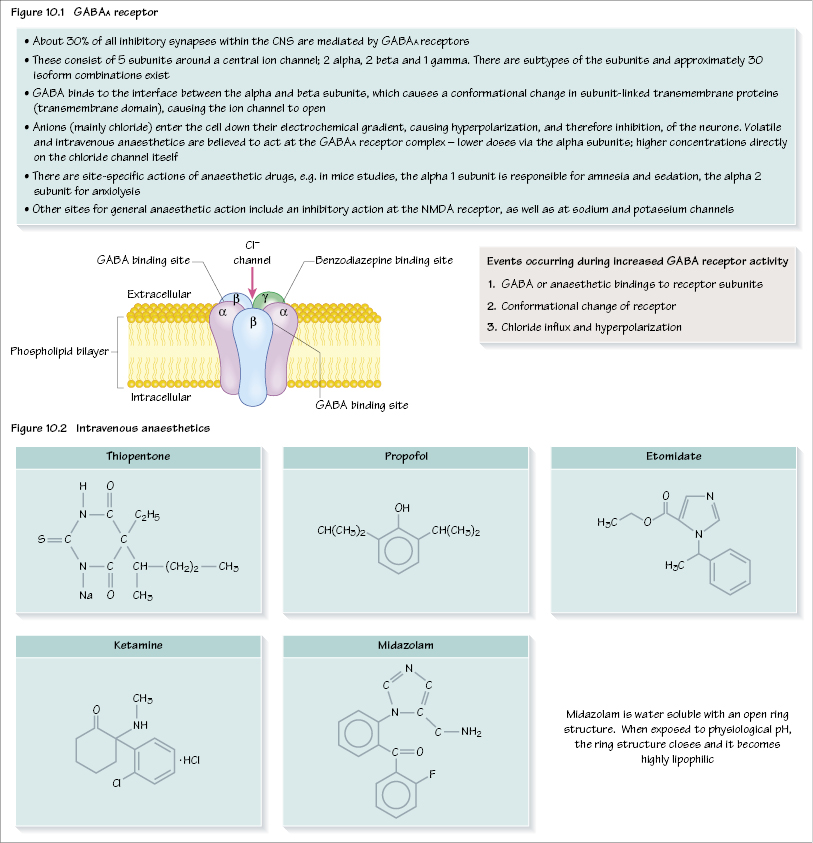 The uses of intravenous anaesthetics are: induction and maintenance of anaesthesia, sedation (e.g. ITU) and operations under local anaesthesia.

This is the commonest induction agent in current practice, and is most frequently used as a pre-prepared 1% (10 mg/mL) emulsion; it is highly lipid soluble.

It produces a smooth, rapid loss of consciousness after intravenous injection, with a relatively fast clinical recovery after either an induction dose or infusion, due to a short distribution half-life (1–2 min). It can cause discomfort on injection, alleviated by the addition of lidocaine.

The mechanism of action is unclear but it is thought to be an agonist at GABA receptors. Systemic effects include:

Dose-dependent sedation and hypnosis occur, with reduced cerebral blood flow, intracranial pressure and cerebral metabolic requirement for oxygen (CMRO2). Its amnesic effect is less than barbiturates or benzodiazepines. Excitatory effects (e.g. involuntary movements) can occur but less commonly than with etomidate or thiopental. Anticonvulsant properties are exhibited although there are reports of grand mal seizures following its use. Hallucinations and sexual fantasies can occur.

There is a marked fall in blood pressure due to direct myocardial depression, a reduction in systemic vascular resistance and a direct effect on vascular smooth muscle tone. This effect is more pronounced than with other agents.

Respiratory depression occurs, with a reduced response to hypercarbia and hypoxia. This reduced responsiveness is to a similar degree to that with barbiturates and volatile agents. Apnoea is common, especially if opiates or depressant premedications are used.