Conditions commonly referred to as connective tissue diseases and/or autoimmune diseases include systemic lupus erythematosus (SLE), rheumatoid arthritis (RA), primary biliary cirrhosis (PBC), fibromyalgia (FM), the various sclerosing syndromes such as progressive systemic sclerosis (PSS) or scleroderma, and Sjögren’s syndrome (SS). Collectively, these disorders affect a significant portion of the United States population, where patients can often appear to be in good health, but whose medical illness may adversely affect their oral cavity or the provision of dental care.

SLE is a chronic, inflammatory autoimmune disorder of unknown etiology that affects many organ systems. Autoantibodies and immune complexes set off an array of immunological reactions, resulting in activation of the complement system, leading to vasculitis, fibrosis, and tissue necrosis. The clinical course of SLE is defined by periods of remission and exacerbation.

RA is an autoimmune disease manifesting as a chronic systemic inflammatory disorder. The disease has a wide clinical spectrum with considerable variability in joint and extra-articular manifestations.

FM is a syndrome of persistent widespread pain, stiffness, fatigue, disrupted sleep, and cognitive difficulties, often accompanied by multiple other unexplained symptoms, anxiety and/or depression, and functional impairment of activities of daily living.

PSS, or scleroderma, is a disease characterized by skin induration and thickening accompanied by various degrees of tissue fibrosis and chronic inflammatory infiltration in numer­ous visceral organs, prominent fibroproliferative vasculopathy, and humoral and cellular immune alterations.

SS is a chronic, autoimmune, inflammatory disorder characterized by lymphocytic infiltration of the exocrine glands in multiple sites, most commonly the lacrimal and salivary glands. It can occur alone (primary SS) or in conjunction with another autoimmune rheumatic disease (secondary SS).

SLE is the prototype systemic autoimmune disease, as virtually all components of the immune system contribute to the characteristic autoimmunity and tissue pathology. The etiopathogenesis of lupus comprises genetic contributions, environmental triggers, and stochastic events.1 Autoantibodies and their antigens, cytokines, and chemokines amplify immune system activation and generate tissue damage. Autoantibody production occurs years prior to the development of clinical signs and symptoms of SLE.2

Although the cause of RA is unknown, genetic, environmental, hormonal, immunological, and infectious factors may play significant roles.3 An external trigger (e.g., infection, trauma) elicits an autoimmune reaction, leading to synovial hypertrophy and chronic joint inflammation along with the potential for extra-articular manifestations in genetically susceptible individuals. Synovial cell hyperplasia and endothelial cell activation are early events in the pathological process that progresses to uncontrolled inflammation and consequent cartilage and bone destruction.

FM is currently understood to be a disorder of central pain processing or a syndrome of central sensitivity. Although the pathogenesis of FM is not completely understood, research shows biochemical, metabolic, and immunoregulatory abnormalities.5

The exact etiology of PSS is unclear; however, the following pathogenic mechanisms are always present: endothelial cell injury, fibroblast activation, and cellular and humoral immunological derangement. Vascular dysfunction is one of the earliest alterations of systemic sclerosis and may represent the initiating event in its pathogenesis.6

Rheumatological diseases are chronic and often difficult to diagnose. A careful examination of the face, temporomandibular joints, and oral cavity for evidence of oral mucosal dryness or lupus-like oral lesions can assist in the diagnostic process for many of these diseases. Salivary measurements and minor salivary gland biopsies from the labial mucosa can contribute to the diagnosis of SS. The relationship between SS and lymphoma underscores the importance of the oral health-care provider aiding in the diagnosis and monitoring of these patients. Among patients with SS, the incidence of non-Hodgkin’s lymphoma is 4.3% (18.9 times higher than in the general population), with a median age at diagnosis of 58 years. The mean time to the development of non-Hodgkin’s lymphoma after the onset of SS is 7.5 years. In addition, patients with major joint dysfunction who undergo total joint replacement will require consideration for antibiotic prophylaxis (AP). While this is controversial, a decision whether to use prophylactic antibiotics should be coordinated between dentist and physician/orthopedic surgeon on an individualized basis.

The manifestations of SLE exhibit no typical pattern of presentation. Small-vessel vasculitis, resulting from immune-complex deposition leads to renal, cardiac, hematological, mucocutaneous, and central nervous system (CNS) destruction. In addition, polyserositis (inflammation of the serous membranes) results in joint, peritoneal, and pleuropericardial symptoms. Diagnosis is made by a combination of laboratory tests and clinical manifestations including 4 of 11 criteria.10,11

Raynaud’s phenomenon can occur in a variety of rheumatological diseases as shown in Fig. 10.1. 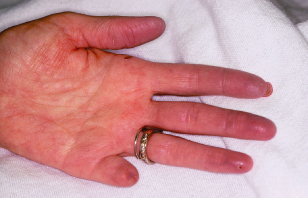 The hallmark feature of this condition is per­sistent symmetric polyarthritis (synovitis) that affects the hands (see Fig. 10.2) and feet, although any joint lined by a synovial membrane may be involved. The criterion for an RA diagnosis uses a score-based algorithm based on four areas: joint involvement, serology test results, acute-phase reactant test results, and patient self-reporting of signs/symptom duration. A score of 6 of 10 or greater must be met for a classification of definitive RA applied to patients with synovitis in at least one joint that cannot be better explained by an alternative diagnosis.12 Patients with a score that falls below 6/10 may be reassessed over time. Progression of RA is shown in Table 10.1. 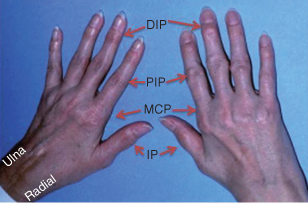 Many people with PBC have no symptoms of the disease when they are initially diagnosed. Routine blood tests for an evaluation for other conditions lead to diagnosis in 25% of patients.

Patients with FM may meet criteria for three or more central sensitivity syndromes. Most patients do not appear chronically ill, although they may look fatigued or agitated.

Some types of scleroderma affect only the skin, while others affect the whole body.

Figure 10.3 Sclerodactyly in a patient with scleroderma. 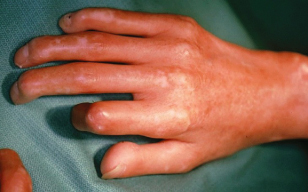 The clinical presentation of SS may vary. The onset is insidious. It usually starts in women aged 40–60 years, but it also can affect men and children. The first symptoms in primary SS can be easily overlooked or misinterpreted, and diagnosis can be delayed for as long as several years.

Medical history and physical assessment reveals the diversity of this multisystem disease that can have phases of stability and exacerbations, called lupus flares.

Affected joints show inflammation with swelling, tenderness, warmth, and decreased range of motion (ROM). Atrophy of the interosseous muscles of the hands is a typical early finding. Joint and tendon destruction may lead to defor­mities such as ulnar deviation, boutonniere and swan-neck deformities, hammer toes, and, occasionally, joint ankylosis. Common joint physical findings include stiffness, tenderness, pain on motion, swelling, deformity, and limitation of motion.

Fatigue is the first reported symptom, with 10% experiencing severe pruritus of unknown cause. Right upper quadrant discomfort occurs in 8–17% of patients.14 Physical examination findings depend on the stage of the disease. In the early stages, examination findings are normal. As the disease progresses, the following may be found:

Patients may complain of chronic widespread pain lasting more than 3 months, fatigue, poor sleep, stiffness, cognitive difficulties, multiple somatic symptoms, anxiety, and/or depression. Except for painful tender (or trigger) points and, perhaps, signs of deconditioning, physical examination findings are normal in patients with FM. The tender-point examination should be performed first during the physical examination, because a number of factors may influence the sensitivity of the tender points during the examination. Pain, not just tenderness, is present at multiple FM tender points (see Fig. 10.4).15

Figure 10.4 Location of the nine paired tender points that make up the 1990 American College of Rheuma­tology criteria for fibromyalgia. 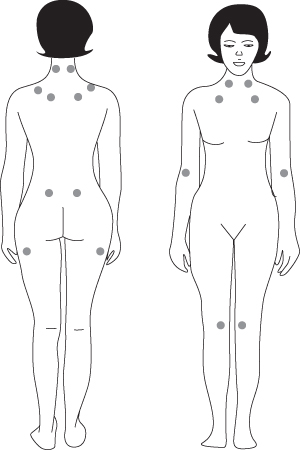 Skin symptoms of scleroderma may include:

Bone and muscle symptoms may include:

Breathing problems may result from scarring in the lungs and can include:

Digestive tract problems may include: