To recognize a malocclusion, a clinician needs to understand ideal and normal occlusions. People with ideal occlusions have all 32 adult teeth in superb relationships in all three planes of space. The tip of the mesiobuccal cusp of the upper first molar fits into the buccal groove of the lower first molar, and the tip of the upper canine crown fits into the embrasure between the lower canine and first premolar (Fig. 1.1, Class I ideal occlusion). Overbite, the extent that the upper central incisors overlap the lower central incisors in the vertical plane, is approximately 20%. Overjet, the distance along the anteroposterior plane between the labial surfaces of the lower central incisors and the labial surfaces of the upper central incisors, is approximately 1 to 2 mm. Teeth, moreover, are normally angled in the mesiodistal plane, normally inclined in the buccolingual plane, and aligned without being spaced, rotated, or crowded along the crests of the alveolar processes (Andrews 1972). Ideal occlusions are rare in the United States.

Figure 1.1. A, B, Ideal occlusion in the skeletal remains of a human adult. (Skull “secretum apertum,” courtesy of Dr. Richard Summa.) 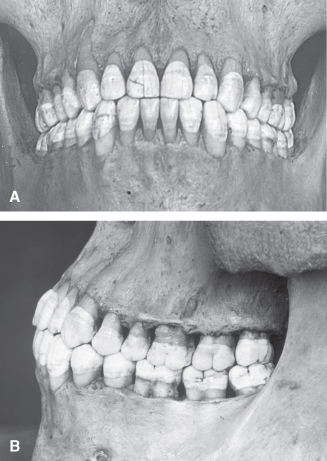 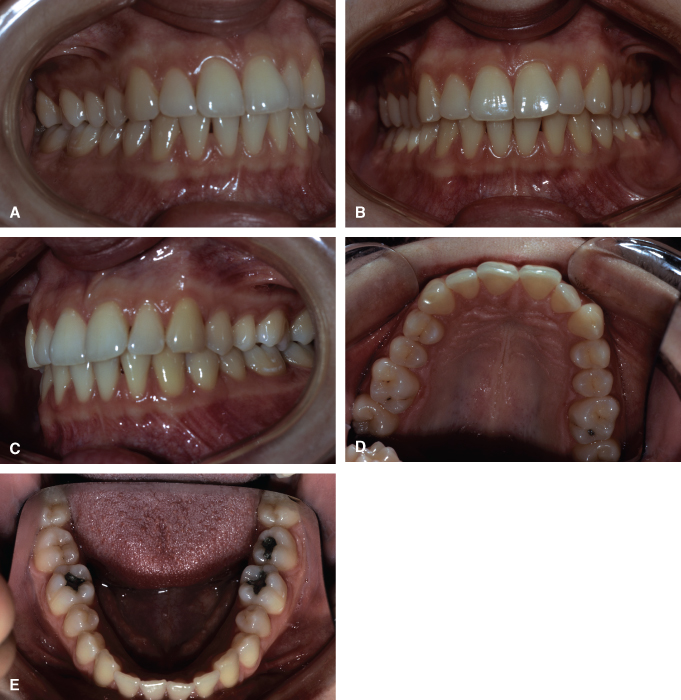 Normal Occlusion in the Primary Dentition

As a child approaches the age when the normal primary dentition transitions into the mixed dentition, spaces develop between the incisors in both arches with growth of the maxilla and mandible (Fig. 1.3). The spacing of primary incisors is needed to accommodate the erupting permanent incisors that are much larger than their primary counterparts.

Figure 1.3. A–E, Normal occlusion in the primary dentition of a 5-year-old boy. 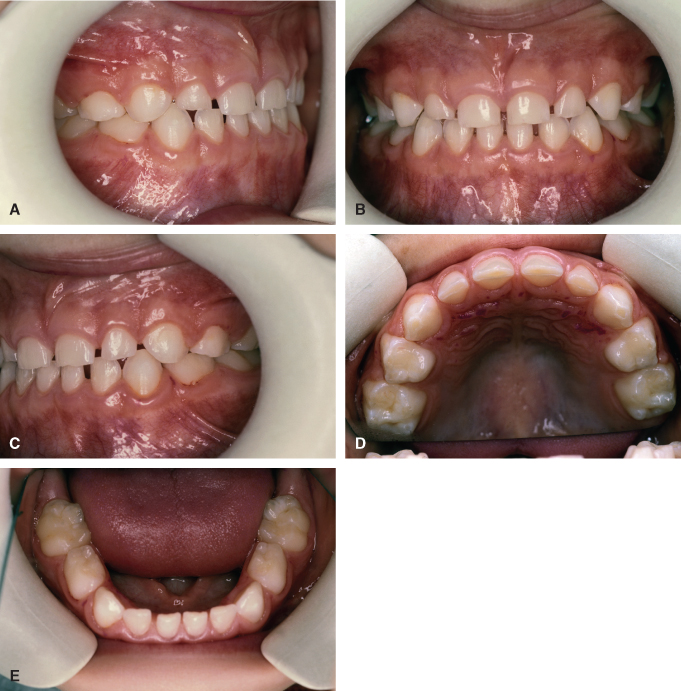 Occlusion is observed and classified when the teeth are in maximum intercuspation, the definition for centric occlusion. Centric relation is defined as the most retruded occlusal position of the mandible from which opening and lateral movements can be performed (Moyers 1973). Centric occlusion deviated on average 0.7 mm from centric relation in 18 Class I normal occlusion subjects, with a maximum of 2.5 mm; however, in 28 Class II patients, the discrepancy averaged 1.2 mm, with a maximum of 4 mm (Williamson, Caves, Edenfield, and Morse 1978). 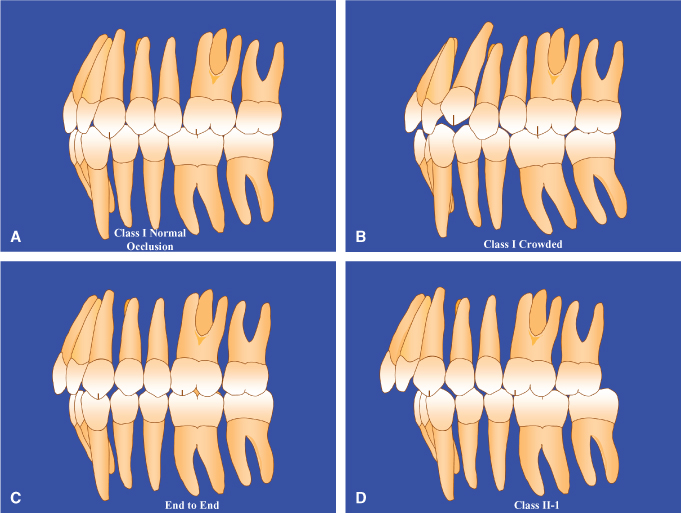 Class I Malocclusions in the Primary and Mixed Dentitions

Crowding problems are rarely found in the primary dentition. If no spacing is seen between the primary incisors, dental crowding can be expected. Crowding is first apparent in the mixed dentition when the permanent incisors begin to erupt. In a crowded dentition, incisors can erupt lingual and labial to the line of arch. The line of arch is located along the crest of an alveolar process where the anatomic contact points of the teeth should be located ideally on a given alveolar process. Rotated and displaced incisors are commonly seen in the developing crowded malocclusion.

In Class II-1 malocclusions, the lower teeth are distal to the upper teeth, usually resulting in larger-than-normal overjet. The upper incisors often have increased labial inclination, making the incisor crowns susceptible to accidental fractures. The distobuccal cusp of the upper first molar occludes with the buccal groove of the lower first molar (Fig. 1.4, Class II-1). The maxillary canine crown tip is located near the mesial surface of the mandibular canine (Fig. 1.4, Class II-1). Patients with these malocclusions may or may not have crowded arches and vary in the degree of overbite from openbite to deep overbite. On average, maxillary arch widths are narrower in Class II-1 patients than in persons with normal occlusion (Staley, Stuntz, and Peterson 1985).

In Class II-2 malocclusions, the upper incisor crowns, especially those of the upper central incisors, are inclined to the lingual, in contrast to the excessive labial inclination observed in many Class II-1 malocclusions (Fig. 1.6). The number of maxillary incisors with lingual inclination varies from one to four. The lingual inclination of the upper central incisors results in small to moderate overjet measurements. Overbite is often deeper than normal, because of the lingual inclination of the upper incisors. The collum angle between the long axis of the crown and the long axis of the root in maxillary central incisors has been shown to be larger in a sample of Class II-2 patients compared with other occlusion groups. Class II-2 patients with large collum angles are predisposed to larger-than-normal overbites (Delivanis and Kuftinec 1980). The maxillary arches of patients with this malocclusion are narrower than normal but significantly larger than the widths observed in Class II-1 patients (Huth et al. 2007). Few of these patients have posterior crossbites.

Class II Malocclusions in the Primary and Mixed Dentitions

In this class of malocclusion, the lower teeth are mesial to the upper teeth, usually resulting in anterior crossbite (Fig. 1.6). The mesiobuccal cusp of the upper first molar occludes with the embrasure between the lower first and second molars. Overbite varies from openbite to deep overbite. Alignment of the teeth in the arch varies from good to severe crowding, with the upper arch being more prone to crowding than the lower arch. On average, the maxillary arch widths of these patients are narrower than those in normal occlusions (Kuntz et al. 2008). The narrowness of the upper arch and the anteroposterior displacement of the arches are often associated with posterior crossbites.

Class III malocclusion in the primary dentition is expressed in an exaggerated mesial step between the distal surfaces of the upper and lower second molars. Often, in younger patients, a Class III occlusion is less severe than it will eventually become, because the mandible usually grows forward for a longer time than the maxilla.

These are more severe versions of Class II and Class III malocclusions and are seen only rarely. They can occur in patients who have lost teeth through extraction that permitted first molars to spontaneously move through the alveolus mesially or distally. Excessive or diminutive growth of the mandible can also result in these severe malocclusions.