TWELVE – A New Plateau : The Dentist As Constraint

A New Plateau : The Dentist As Constraint

Four months later, on the last Friday in January, Brian and Joe were sitting in Joe’s office trying to figure out the latest release of their accounting software and payroll. Unlike Rich, who had a bookkeeper to wrestle with such problems, Joe and Brian still performed their own monthly accounting and government reporting work.

After entering the final transactions for the month, Joe ran the comparison report for the past year. “January is usually one of the worst months of the year for me, but I’ve just had the best January since I started my practice. It actually beat eight of the best months from last year. And this past quarter is up 25 percent from last quarter. I have $10,000 more free cash than I had a month ago. It’s amazing what we’ve been able to do with Rich’s approach.”

Over the past three months, Liz had succeeded in finding Joe and Brian excellent sales resources. Joe’s salesperson was Sonya McAllister, a 28-year-old former dental office manager whose Irish accent and rough humor had a way of getting patients to feel comfortable talking about their needs and worries. Joe had to admit to Liz that she was right when she said that the ideal salesperson would not be like his other office staff. Liz laughed, saying, “I told you she would be a little scary!” It had taken some patience and two return visits to Grand Forks on Liz’s part to get Sonya to follow the layers of resistance in her sales approach. However, once Sonya had her first few successes with it, she adapted it to her own style and was beating sales records every month.

Sonya had agreed to a base salary of $30,000 with an opportunity to double it based on actual throughput generated. Joe had to swallow hard to agree to such generous compensation. He consented to trying it only after a conversation with Rich in which his friend-turned-mentor pointed out that the best salespeople in many organizations make more than the company president. Rich had also recommended that, because both Brian’s and Joe’s sales associates came from a dental office background, they should be used to back up the staff in case of illness or vacation. He emphasized that they should be compensated for those days based on their average earnings from the previous quarter rather than being paid the same wage as the staff they were replacing to avoid feelings of resentment—and perhaps a resulting lack of effort—on the part of the sales staff when they were needed to support the team. At the same time, they enjoyed the occasional variety in their work and understood how keeping the practice running smoothly directly benefited them. It ensured that patient needs were met, which made their sales job easier.

Once all of this was settled, Rich delivered his lesson on throughput per constraint unit to Joe and Sonya—and later to Brian and his sales associate. Sitting in his office and looking at his improved financial figures, Joe thought back on Rich’s two-hour webcast lesson on the difference between focusing on throughput versus sales dollars.

“Congratulations, Joe!” Rich had said with a smile. “With the success of the school board business and a good salesperson, you are now close to becoming the internal bottleneck, or constraint, of your practice. You have just a few hours a week left to fill, and Sonya is probably within two months of filling them. So if you and Sonya have a choice in terms of what type of work to go after, let’s at least understand what is best from a financial point of view. Then we’ll talk about how to address your next constraint before it’s too late.

“To figure out what gives your entire practice the best bottom line results, there’s a really easy measurement I want you to start using. It’s called throughput per constraint unit. In this case, we’ll be using throughput per dentist hour because we always want the dentist to be the constraint of the practice. It simplifies our thinking, allows everyone to better understand desirable behaviors, and in the long run, makes it easier to achieve a vision for a practice. So, let’s compare how much throughput you generate per hour by doing implants versus partial dentures.” Rich brought up the flow chart he had used as an example when he first taught Joe and Brian step 1 of the Five Focusing Steps. 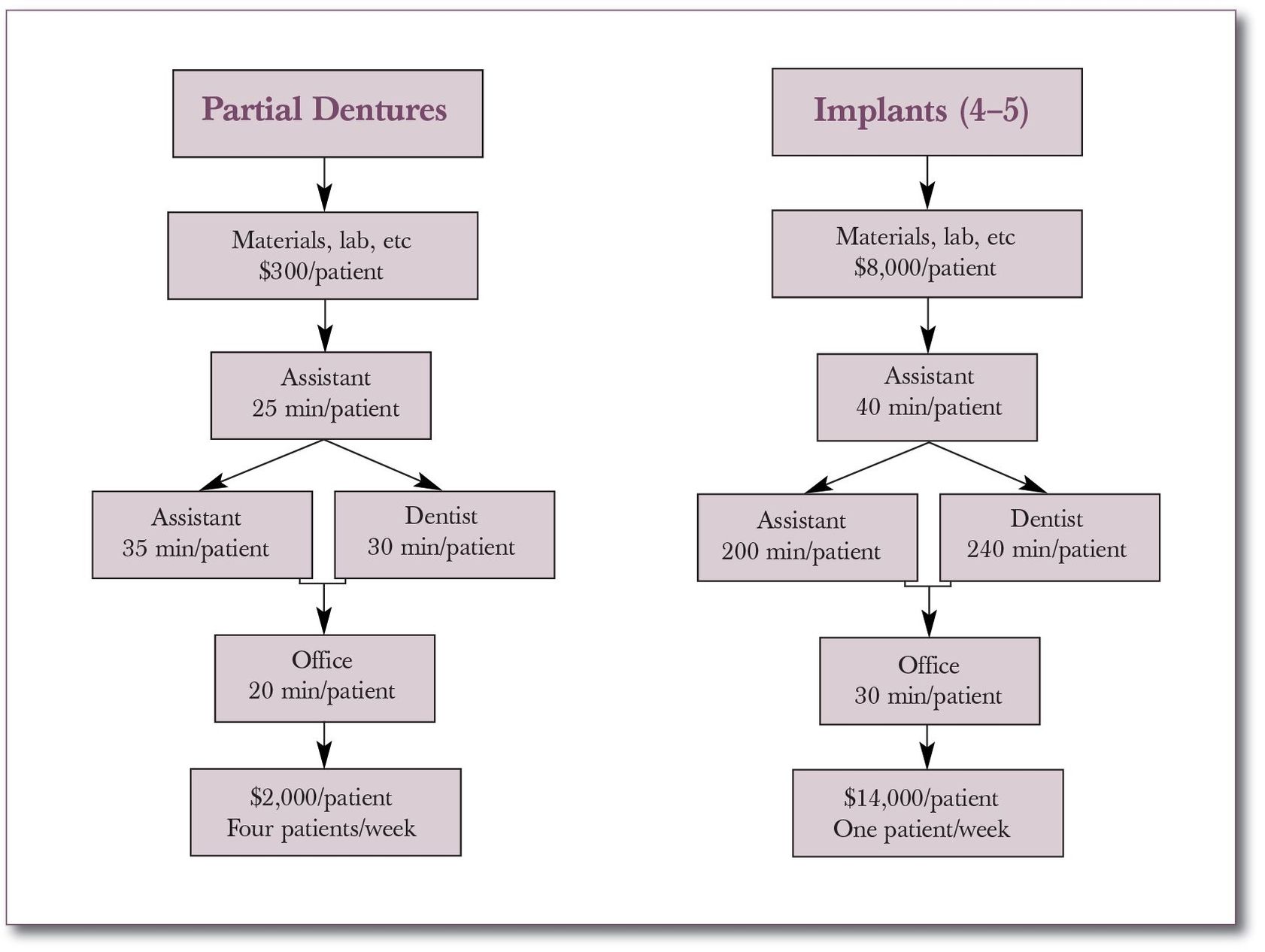 “Remember that throughput is the money left in your bank account after you have collected from your patient or insurance company and paid suppliers, labs, and couriers for any materials used during the procedure. Let’s say we collected $14,000 for four implants but paid $8,000 out to suppliers. That left us with $6,000. Since Joe is quickly becoming the constraint, we need to look at how many hours of Joe’s time it would take to generate the $6,000. Let’s say it takes him 240 minutes, or 4 hours to place the implants. Per hour, if I divide the $6,000 throughput by four, I come up with $1,500 for the practice’s bank account for every hour Joe spends doing implants, correct?”

Sitting in Joe’s theater room, Joe and Sonya both nodded in the direction of the webcam. Rich directed, “Now you guys do the same calculation for partial dentures.”

Sonya went to the whiteboard and wrote down the calculations, then read them out loud. “We get $2,000 from the patient, pay out $300 to suppliers, leaving $1,700 in our bank account. The dentist spends 30 minutes of his time to do this procedure. So to compare, if the dentist spends an hour, he could perform two partial denture procedures, which would leave $3,400 in the bank after paying suppliers. I’d say this sounds much more lucrative than implants, Dr Armstrong!”

“But what about all that implant equipment I bought and the big bucks I spent for the training?” Joe asked with a pained expression.

Rich was sympathetic to Joe’s plight. He’d certainly made similar investment mistakes in the past. But he knew that it was important that regret over a bad decision not hold Joe back from making better decisions now. His voice was firm but kind as he said, “Joe, forget about all that. It’s water under the bridge. You invested, and after two years, you haven’t come close to getting a return on your investment. Remember the Five Focusing Steps and what I said about inertia. Put it behind you. It has absolutely no bearing on where you go from here.”

Tags: Dentistry with a Vision Building a Rewarding Practice and a Balanced Life
Jan 4, 2015 | Posted by mrzezo in General Dentistry | Comments Off on TWELVE – A New Plateau : The Dentist As Constraint
Premium Wordpress Themes by UFO Themes
WordPress theme by UFO themes