A Difficult Beginning: Learning Step 1 of the Five Focusing Steps

The next meeting once again took place in Joe and Barb’s theater room with Rich and Liz on the webcam. The group was excited to begin the next step. Rich began by reminding them, “I’m going to cover something that you will use over and over again to improve your practices. It’s so simple that you’ll think you know everything in an hour. But if you believe what people have told me who have applied this for 15 years or more, you will continue to learn profound things after years of practicing. Today, I’ll teach you something called the Five Focusing Steps with a simple example that applies to both of your dental practices and your consulting practice too, Barb. In less than an hour, you will make some decisions based on the example and start to follow the Five Focusing Steps. Ready?”

They were indeed ready, so Rich began. “In this example, all you’ll need are some basic math skills—adding, subtracting, dividing, and multiplying.”

Rich was prepared for the moans and groans and had asked Joe to make sure there were four calculators in the room. Joe tossed a calculator to Jen.

Rich asked the group, “Tell me what you think is more profitable, dental implants or partial dentures?” All four shouted at once, “Implants!”

Rich was not surprised by this answer. “OK,” he began. “Let’s check. I’m going to give you an example. A dentist is in his office 32 hours per week, but about 12 hours of that time is nonbillable. He wants to use those hours to make more money. He is determined to do procedures no more than 32 hours in any week, however. To make more money, he has investigated two different opportunities to add services.” Rich brought up a slide on his screen. 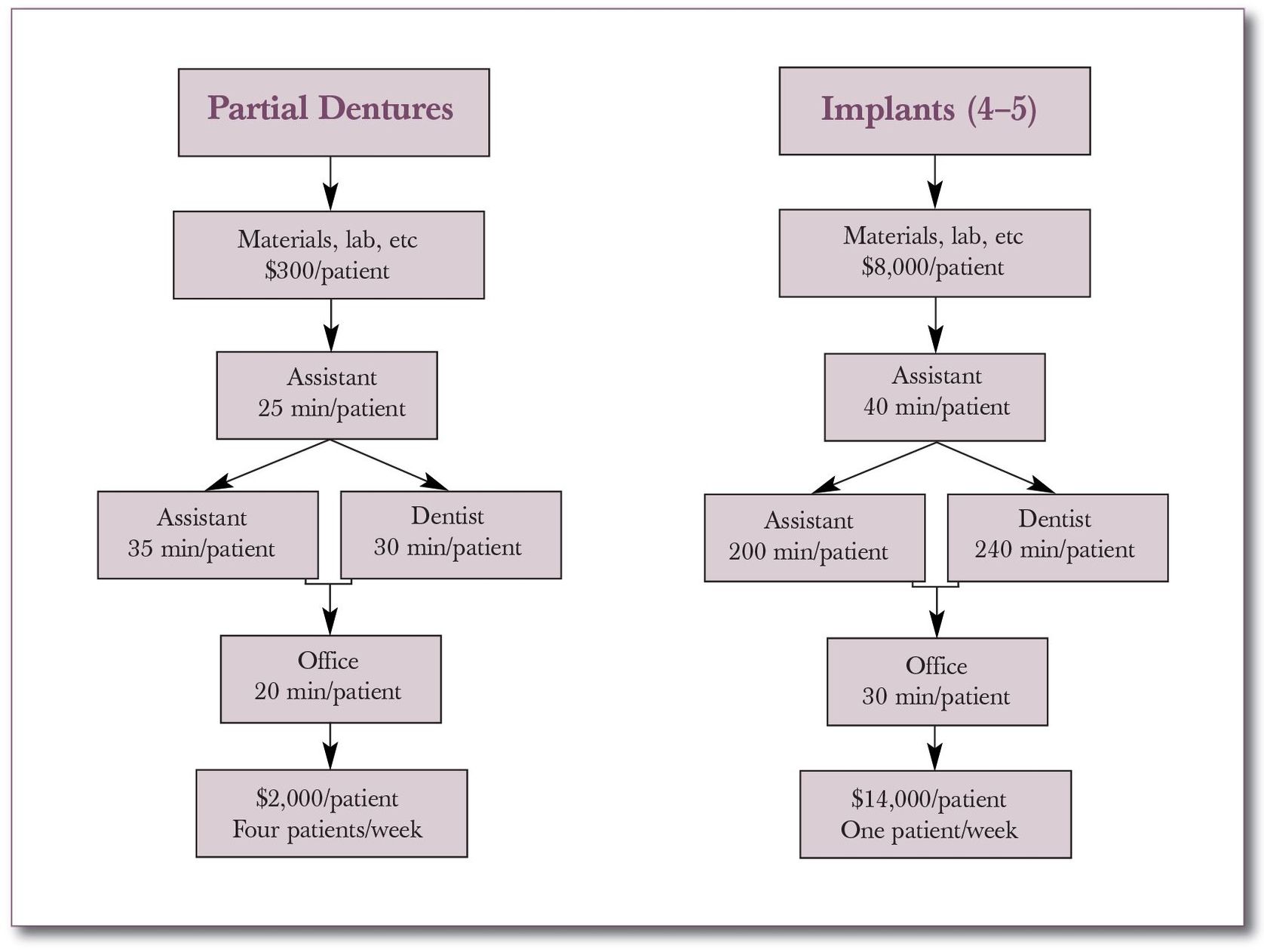 “The patient’s needs and wants come first. But hypothetically, when you have open time to do additional work and you have a choice between two types of patients or procedures to fill your schedule, what should you do? One idea is to do implants. Assume that no one in the immediate geographic area is offering the service. With some extensive promotion and referrals, the hypothetical dentist in this example can eventually treat up to one new implant patient per week, with an average of four or five implants per patient. The other idea is to offer removable partial dentures. This service could be provided to up to four new patients per week.

“I have two simple questions for you. Which service should he offer, and what is the maximum net profit he can add to his practice in one week? Before you answer the questions, let me give you some information about his staff.

“I call this the Paradise Practice because the same staff shows up every day and works exactly nine hours a day, four days a week without fail. They’re never sick, they never complain, they don’t take vacations, and they never even take bathroom breaks—it’s paradise!”

“For you, maybe, but it doesn’t sound like paradise for the staff,” Liz whispered to the webcam-viewing audience.

“Detention for anyone who talks while I’m talking,” Rich quipped as he brought up a table on his screen.

Joe looked puzzled. “Who does the insurance billing, and why is there no bookkeeping staff?”

Rich was expecting these kinds of questions. “Look, guys, this is a simple example. I am certain that if the principles are correct in this example, they will also apply easily in your much more complex real-life situation. If the principles are not correct in a simple example, then for sure they won’t work in a more complex environment. Assume that the billing and all other work is already assigned 100 percent between office and assistant staff.”

“How can you make that assumption for any dentist, Rich? I personally spend a lot of my time on billing and bookkeeping issues,” Joe objected.

“Joe, I’m making that assumption because I personally spend almost zero time per week on billing and bookkeeping issues. I’m not going to cover how to do that tonight, OK? That’s a future topic. In this example, the dentist is only working on patients 20 hours per week. If you want to assume that he spends some of the remaining time dealing with billing and insurance issues, go ahead. But please be patient, work through the example, and then we’ll talk about your practice. I promise.”

Using an electronic laser pen, Rich pointed to the Paradise Practice flow chart. “For this practice,” Rich said, pointing to the top left portion of the screen, “patients or their insurance companies are willing to pay $2,000 for a removable partial denture. Assume that there are four patients a week, every week, who want this procedure.” Rich moved his pointer to the right. “On the other hand, for implants, patients pay $14,000 for the average four or five implants, and there is one patient every week who wants the implants. The dentist is trained to do both procedures.”

Rich placed his pointer on the left side of the flow chart. “In order to perform the partial denture procedure, he has to pay $300 for materials and lab work. The assistant has to do some preparation and documentation for 25 minutes, and then the dentist and assistant do their patient work together, which requires exactly 30 minutes of the dentist’s time and 35 minutes of the assistant’s time. Finally, the office staff takes over for 20 minutes. At the end of the procedure, the dentist’s bank account is $1,700 riche/>

Tags: Dentistry with a Vision Building a Rewarding Practice and a Balanced Life
Jan 4, 2015 | Posted by mrzezo in General Dentistry | Comments Off on SEVEN – A Difficult Beginning: Learning Step 1 of the Five Focusing Steps
Premium Wordpress Themes by UFO Themes
WordPress theme by UFO themes