The impact of surgical treatment of OSA on cardiac risk factors

A number of possible mechanisms by which OSA might affect cardiovascular function have been hypothesized. Repetitive hypoxemia and hypercapnia throughout the night may be responsible for vascular injury and acceleration of atherosclerosis,4 chronic sympathetic hyperactivity,5 elevation of fibrinogen,6 pulmonary hypertension, right heart hypertrophy7 and failure,8 and increased risk of plaque ruptures and subsequent cardiovascular event.9

In recent years, several serum markers have been investigated as potential surrogate biomarkers for monitoring and predicting cardiovascular events. These serum biomarkers include leptin, matrix metalloperoxidase, proteins involved in the angiotensin–aldosterone axis, nitric oxide, plasma cytokines, tumor necrotizing factor a (TNF-a), interleukin-1 (IL-1), IL-6, IL-8, IL-10, IL-18, and inflammation markers such as fibrinogen, high-sensitivity C-reactive protein (hs-CRP), and serum amyloid A (SAA). The important role that inflammation played in the process of atherosclerosis has become well established over the past decade.10 Inflammatory cells and cytokines are involved in virtually every step in atherogenesis.11

The inflammatory cascade can be activated by noxious stimuli such as the repetitive hypoxemia associated with untreated or poorly treated OSA. Activation of the inflammatory cascade leads to secretion of proinflammatory cytokines, such as TNF-a and IL-1. IL-1 then activates IL-6 which upregulates the production of CRP in the liver. CRP is a pro-oxidant that induces expression of adhesion molecules, such as ICAM-1 and VCAM-1, and production of monocyte chemoattractant protein-112 (Fig. 13.1). These factors facilitate the attachment and migration of monocytes into the subintimal spaces of the blood vessels. The monocytes are then transformed into macrophages and take up cholesterol lipoproteins which lead to fatty deposits in the subintimal space. Further injurious stimuli propagate the attraction and accumulation of macrophages, mass cells, and activated T cells, with resultant formation and growth of atherosclerotic plaque. Secretions of metalloproteinases and other connective tissue enzymes by activated macrophages may cause breakdown of collagen and make these plaques more prone to rupture. Disruption of the atherosclerotic plaque exposes the atheronecrotic core to arterial blood and leads to thrombosis.13 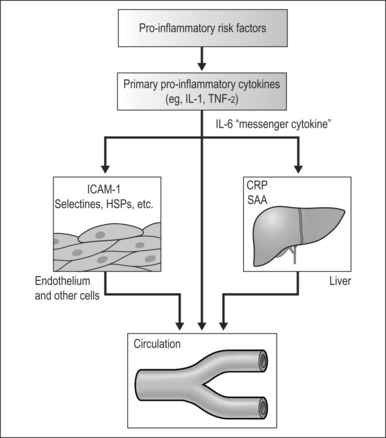 Evidence suggesting an association between OSA and inflammatory factors includes the findings of increased plasma IL-6, CRP, and fibrinogen in patients under hypoxic conditions at high altitude,14 as well as increased daytime plasma levels of IL-6 in patients after sleep deprivation and patients with excessive daytime sleepiness.15 A study by Shamsuzzaman et al. indicated a strong association of OSA and elevated CRP levels.16 In their study, 22 patients with newly diagnosed OSA showed significantly higher CRP levels compared to the control group (0.81 ± 0.15 mg/dl vs. 0.28 ± 0.12 mg/dl). Minoguchi et al. measured carotid intima-media thickness (IMT) and serum CRP, IL-6, and IL-18 levels in patients with OSA (n=36) and compared these measurements to an obese control group (n=16). They found that carotid IMT and serum levels of CRP, IL-6 and IL-18 were significantly higher in patients with OSA than in the obese control group. In addition, carotid IMT was significantly correlated with levels of CRP, IL-6, and IL-18, duration of OSA-related hypoxia and severity of OSA. Moreover, the duration of hypoxia during total sleep time was the strongest independent predictor of carotid IMT in patients with OSA and obese control subjects.17

Although there are numerous commercial kits available for assessment of cardiovascular risk, the majority of these tests suffer from lack of standardization, consistency, and rigorous scientific evidence to support their use. At a recent workshop on inflammatory markers and cardiovascular disease sponsored by CDC and AHA in Atlanta, it was concluded that the current use of assays for assessment of cardiovascular risk should be limited to measurement of hs-CRP.18 The hs-CRP should be measured twice, either fasting or non-fasting, with the average expressed in mg/l, in metabolically stable patients. Relative risk categories of low, average and high correspond to hs-CRP values of less than 1, between 1 to 3, and greater than 3 mg/l, respectively.

Interventions targeted to correct sleep disordered breathing should result in improvement in sleep architecture, sleep quality and nocturnal oxygenation. This in turn should lead to reduction in the level of bioactive proteins in the serum and thus reduction of cardiovascular risk in patients with OSA. Yokoe et al. reported significant decrease in levels of CRP after 1 month of CPAP treatment in patients with moderate to severe OSA.19 Similarly, Minoguchi et al. found that treatment with CPAP significantly improved sleep quality and decreased serum levels of TNF-a. On multiple regression analysis, the strongest predictor of spontaneous production of TNF-a by monocytes was the percentage of time with SaO2<90%.20

Although CPAP devices are highly successful, their use is limited by poor patient compliance. Patients often turn to surgical treatment when non-surgical treatment fails. Although the treatment of OSA using CPAP is different from surgical treatment (overcoming upper airway obstruction via positive pressure versus removal of the obstruction site), both treatment modalities are focused on reduction of apnea events, reduction in sleep fragmentation, increase in total sleep time, and reduction of nocturnal hypoxia. Thus, surgical treatment may be as successful as CPAP in reduction of cardiovascular risks. A study presented by Friedman et al.21 showed statistically significant mean CRP level reduction from 0.33 mg/dl preoperatively to 0.16 mg/dl postoperatively (Fig. 13.2). This study involved 23 patients with moderate-to-severe OSA who underwent a variety of procedures including uvulopalatopharyngoplasty (n=15), palatal stiffening procedure with pillarimplants (n=8), and thyrohoid suspension procedure (n=1). Interestingly, they found that there is a statistically significant reduction in CRP levels in patients who were surgical responders based on polysomnogram (PSG) criteria as well as patients who were surgical failures. The CRP levels dropped from 0.33 to 0.17 in patients who were surgical responders and from 0.32 to 0.16 in patients who were non-responders (Figs 13.3 and 13.4). Sleep parameters such as Apnea Index (AI), Apnea/Hypopnea Index (AHI) and lowest oxygen saturation (LSAT) may impact synthesis of CRP. (Classically, surgical ‘success’ is arbitrarily defined as a 50% reduction in preoperational AHI with a posttreatment AHI of <20.) 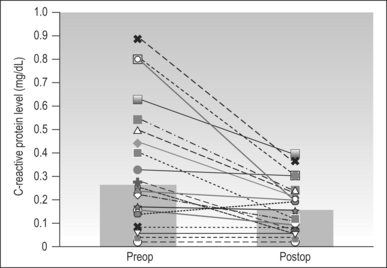