SIXTEEN – Hard Science on the Softer Side of Business : Managing People

Hard Science on the Softer Side of Business : Managing People

Brian’s receptionist and scheduler, Sarah, was showing Liz the new scheduling approach they had begun to implement—buffering by half days. Sarah was also proud that she had started a list of short-notice patients and had actually booked two short-notice appointments that week, adding $350 to Brian’s bottom line. It didn’t sound like a lot, but that was just the first week. If Sarah could triple that amount every week, it would be another $50,000 net profit.

Still, Liz observed that Sarah seemed to be holding something back. She kept looking at Brian as she was explaining the changes, and Brian said nothing. When Brian left the main office to attend to a patient, Liz asked Sarah if something was bothering her.

“Well, I know I shouldn’t talk about Dr Lerner behind his back, but I listened to him for an hour after work last week. That was on my own time. We talked about your ideas and how we could make some changes. On my own, without Dr Lerner’s help, I did it and made extra money for him in the first week! You’d think he would at least say thank you. It’s not like I’m expecting a raise or something like that.”

Liz thanked Sarah for taking the risk to talk about her feelings. She told Sarah that dentists, like almost all other professionals, are not taught much about how to effectively manage people. So most dentists tend to concentrate on what they enjoy most—either the technical or business aspects of their work. “Tomorrow, Dr Lerner, Dr Armstrong, and I are going to start some training on managing people. Talk with me in a month and let me know if it’s making any difference for you. OK?”

Sarah looked a little embarrassed. “I didn’t mean to say that Dr Lerner needed training or that I didn’t like working here. I hope you’re not going to tell him what I said!”

“Don’t worry, Sarah,” Liz said with a wink. “Your secret is safe with me.”

As Liz drove to Joe’s office to follow up on his scheduling implementation, she thought about what Sarah had said. There were a few questions she wanted to ask Joe to better prepare for tomorrow’s session on managing people.

Scheduling changes were also demonstrating success in Joe’s practice in this first week, with Tina in charge of the project.

“How much more improvement can you get from the scheduling?” Liz inquired, as they sat down on the couch in Joe’s office.

Joe thought about it and speculated. “Probably another 5 to 10 percent to the bottom line.”

Motivating staff to continue improvement efforts in a practice

“Why do you think that Tina will continue the effort to get that 5 to 10 percent?” Liz asked evenly, trying to get a sense of Joe’s method of managing people.

Again Joe was thoughtful as he spoke. “I think Tina is excited about it. I haven’t given her the goal yet. In fact, we didn’t talk at all about what she accomplished this week until you arrived. But she knows from our conversation last week that she can implement more.”

Liz had one more question. She didn’t want to go into too much depth today because she wanted both Joe and Brian to hear and recognize the people issues together. Liz had learned that social groups made for stronger influence to change, and she wanted Joe and Brian to be something of a support group, with Rich continuing to mentor.

“Joe, suppose Tina experiments with the scheduling. Maybe, she even goes beyond what you talked about, and the result has, at least for a short time, a negative impact on your utilization. What would your reaction be?”

Joe didn’t hesitate this time. “If she did something I didn’t ask her to do without checking with me first and it had a negative effect on my income, I’d be pretty upset.”

“What if it had a positive effect?” Liz asked.

“Then I’d be happy!” Joe exclaimed.

“Thanks, Joe. See you tomorrow.” Liz started putting on her coat, getting ready to leave when Joe interrupted.

“Wait a minute! Liz, you’re not going to leave me hanging like this without telling me why you’re asking these questions, are you?”

“Tomorrow, Joe,” Liz said with a smile and left quickly.

The next morning, Liz wrote PEOPLE 101 on the board in Joe’s basement. Cappuccinos in hand, Liz, Joe, and Brian were ready for the Friday morning lesson. This time, Rich was on the other end of the phone, back in Albany. Liz knew that this was an uncomfortable topic for both Brian and Joe. She had heard them complaining frequently about people problems, thinking that life would be much easier if they didn’t have to worry so much about someone getting upset or not doing their job properly. Sometimes, as Brian described it, managing people was like trying to walk on eggshells without breaking them, while Joe claimed it was more like trying to herd wild dogs.

There is a system of cause and effect at work among staff members.

Liz began: “Guys, there are a few basic things involved in managing staff. The first thing to recognize is that even though your staff members have individual responsibilities, you are a team. If one person fails to do her job properly or doesn’t show up for work or has problems, it’s not just her problem. It has repercussions for others, sometimes for the entire staff.”

Joe was quick to respond, with a grimace on his face. “Liz, you know how impatient I get when I hear clichés like ‘teamwork.’ I paid a fortune last year to a team-building company to take my staff out for two days in the mountains of Arizona.

“While we were there,” Joe continued, “we did stuff we thought we could never do, like climbing a 50 foot rope vertically and crossing raging rivers on narrow logs. Our lives literally depended on everyone supporting that rope or the logs. By the end of the two days, we were hugging and kissing each other, tears streaming down our faces, feeling close and supportive. By 10 o’clock Monday morning, we were at each other’s throats again!”

One teamwork program by itself is not sufficient to get lasting results.

Everyone laughed at Joe’s story, even though, underneath the humor, it was true and sad. Liz commented, “The fact that you didn’t get lasting results doesn’t mean that the teamwork program was bad. It just means it was probably insufficient. I’ve had the same issues that you’ve had, Joe, in dealing with the people side of any business I’ve worked in. I had two major problems to overcome. One was the challenge of sustainability—how I could get lasting results. The other was predictability—how to influence people’s behavior and know that the actions I took would get results. That’s the difference, to me, between soft and hard science. So even though I think the soft sciences like psychology and sociology have contributed something important to human understanding, when dealing with issues in an organization, I want more of the hard science. We must have predictability and sustainability to make the effort worthwhile.”

“So what does it take to get predictability and sustainability?” Joe demanded.

The essentials: A common goal, six forms of influence, and skills to implement them

“A common objective combined with the six forms of influence, which I’ll get to later, and the skills to implement them.” Liz answered.

“For me, teamwork starts with one set of goals that everyone is working toward. Everyone must know his or her part in achieving the goals. And not a week should go by without the team reviewing their progress toward the goals.”

Brian asked, “Do you have an example?”

“Of course!” Liz smiled and projected a slide on the screen. 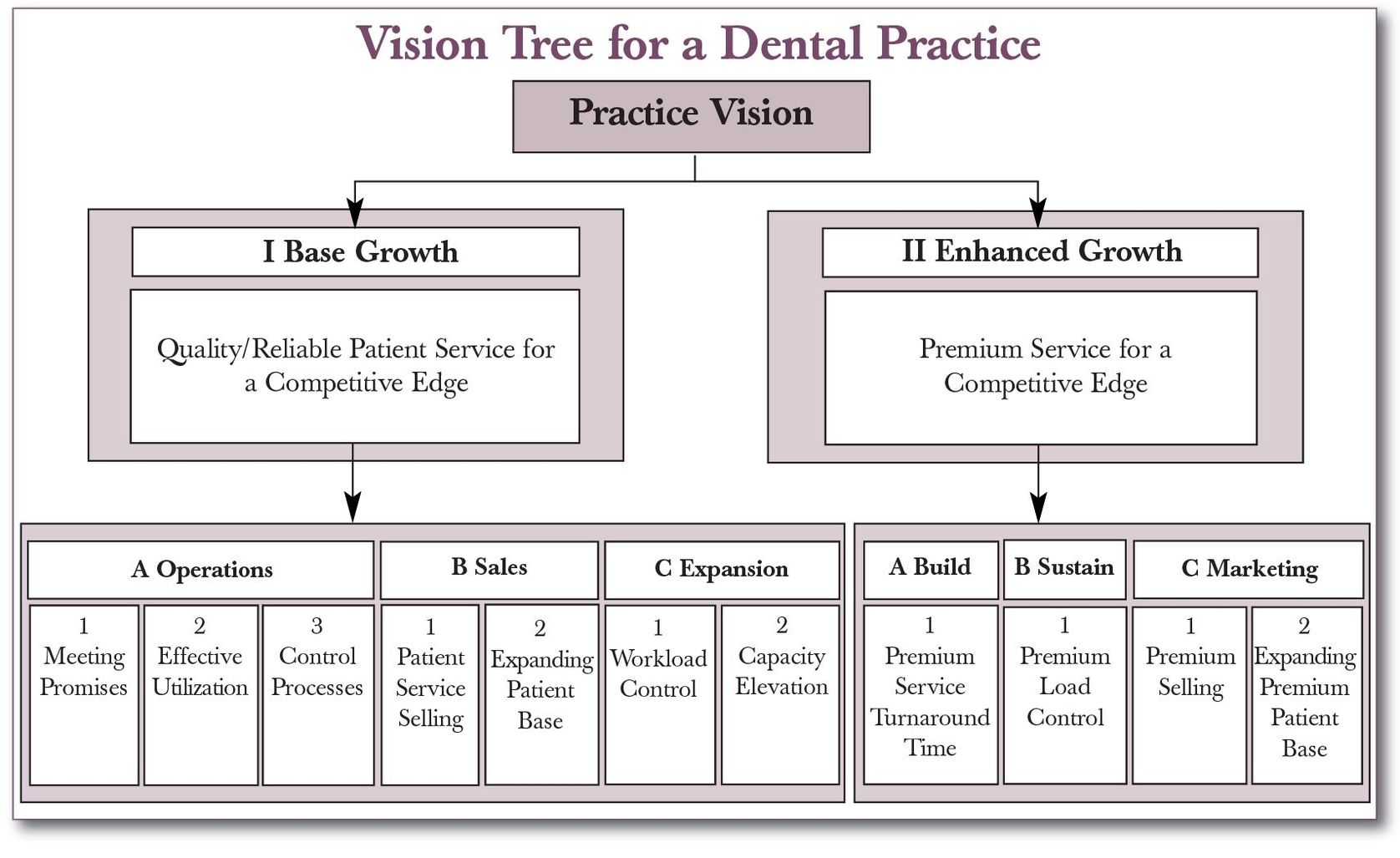 See Appendix A for more details on the Vision Tree for a Dental Practice.

“Whoa,” Joe said with a low whistle. “What the heck is that?”

“It’s an example of a two-year road map to improve a practice. Don’t worry. I’ll give you a copy you can work on for your own practice. This is a generic example for dentists and oral surgeons. It’s based on an idea in a book by Dr Eli Goldratt titled The Goal. We called it a Vision Tree for a Dental Practice. The premise is that for most patients and dentists, mutual respect is very important. Patients hate wasting their time waiting endlessly for the work to be completed or having to come back for more appointments due to quality issues or administrative problems. Dentists lose cash flow and income if they have holes in their schedules or take too long to finish a total procedure. The Vision Tree approach recognizes that the problem is not only in how you run your technical and office operations. It’s also about building in sales and expansion strategies to take advantage of improved internal capacity and capability.

“Think of the top two levels of the diagram as what you want as the owner of the practice. In the second level, box I represents year one, in which—for many dentists—the biggest leverage for improving their practice is in basic improvements such as meeting promises to patients on appointment times and total procedure durations. It’s about learning how to market and sell and having a healthy appointment book, week after week. Box II represents year two, which is when there is someone in the practice who really knows how to do basic marketing. Then, the practice can focus on premium marketing—doing a better job of finding the kinds of patients the dentist really wants to treat to enhance his or her practice. The third level down is an overview for one of your staff—a responsible area of the practice such as scheduling, quality, or sales. The general sequence of implementation is left to right. This diagram actually goes to more levels, and you can assign a box to each person at the lowest level. You only monitor one or two boxes at a time at the lower levels. However, with this road map, everyone can see where he or she fits in for the next year or two, what’s expected, and who’s responsible.”

Brian asked, “How does anyone know what to do? These boxes are just titles.”

“Well, here are a couple of examples of what we put in a box,” Liz said, projecting a new slide.

Tags: Dentistry with a Vision Building a Rewarding Practice and a Balanced Life
Jan 4, 2015 | Posted by mrzezo in General Dentistry | Comments Off on SIXTEEN – Hard Science on the Softer Side of Business : Managing People
Premium Wordpress Themes by UFO Themes
WordPress theme by UFO themes