Fig. 17.1
(a) Mesiodistal section of premolar monkey tooth (macaque iris) after in vivo treatment using resorcinol formaldehyde resin (Robinson et al. 1976). The resin is seen as a red colouration extending from the lesion surface to the visible limit of the lesion. In this instance, this is the dark zone. (b) Electron microradiograph of human white spot carious enamel, ~dark zone region after infiltration with 14C-labelled resorcinol formaldehyde resin in vitro (Robinson et al. 1976). The section is viewed with the radiographic film in situ. The prism outlines are visible as dense black lines (arrows). This may be due to fogging by the labelled phenol but, in addition, reduction by the resin itself. The image indicates penetration of resin along prism boundaries in the earliest parts of the lesion. Bar = 1 μm
While not being clinically suitable, this material did establish proof of principle in terms of very effective infiltration of caries lesions of enamel with a protective effect against further acid attack. It also highlighted the issues of determining the extent of penetration and the extent to which lesion pores had been occluded.

17.3.5 Detection of Resin Within the Lesion and Measurement of Occluded Volume

In developing materials specifically for infiltration, the depth of penetration and the ultrastructural location of infiltrant are important parameters in assessing effectiveness. Determination of volume of lesion pores occluded, i.e. filled by resin, is also extremely important in this respect. Data on volume of pores occluded not only provides information concerning penetration effectiveness but also on resin shrinkage during treatment. If the method is nondestructive, it can be used to assess the effects of further acid attack on the treated lesions directly by measuring any increase in pore volume due to further demineralisation.

As far as penetration is concerned, incorporation of dye into the resin is useful for simple visualisation of penetration (Robinson et al. 2001). For greater resolution, confocal laser scanning microscopy (CLSM) is a valuable tool and has provided useful data on the extent of resin infiltration as well as some data on histological location. In those parts of the lesion infiltrated, this has demonstrated that resin appears to occupy the body of enamel prisms (Fig. 17.2) (Paris et al. 2007). It is of interest to note here that while resin (the methacrylate-based adhesive Excite) was present in the bodies of prisms, the prism boundaries, a region considered to be at least as porous as prism bodies, seemed to contain less resin. The porosity of both prism bodies and prism boundaries is clearly seen by green fluorescein staining of non-infiltrated regions of the lesion. This may be due to local variations in pore structure, but whatever the reason for this is, it raises the important question that while resin may be visibly present, it does not indicate the extent to which porosities are actually occluded. Fully occluded pores would offer maximum protection against further entry of acid and egress of dissolved mineral ions as well as conferring maximum mechanical support. See also Gelani et al. (2014). CLSM has limited penetration into enamel such that estimating penetration depth from the outer surface is limited. Currently such assessments are carried out on tooth sections after in vitro or if possible after in vivo administration. The resin must be labelled with a fluorescent probe to render it visible. 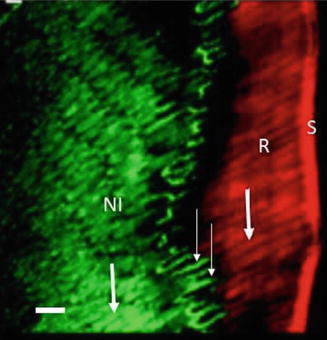 Fig. 17.2
CLSM image of an HCl-etched lesion treated with the adhesive Excite (Adapted from Paris et al. 2007 with permission). S surface of lesion, R the outermost 50–100 μm of prism cores are filled with resin (red fluorescence heavy arrow), NI non-infiltrated parts of the lesion body, the highly porous prism cores (heavy arrow) and prism boundaries (light arrows) show green fluorescence. Bar = ~10 μm
Radiographic procedures are appropriate if resins are rendered radio-opaque. This is not feasible, however, with current methacrylate-based resins since they are radiolucent. Incorporation of radio-opaque components or a radio-opaque filler would be necessary. The technology is, however, of value in assessing the protective effect of resin against further demineralisation. Autoradiography is also a useful approach for investigations in vitro and has the possibility for detailed ultrastructural location (see Fig. 17.1b).

Measurement of volume occluded by resin is also an important parameter as indicated above. Partially occluded pores will offer less protection to further acid attack as well as poorer mechanical support.
Determination of occluded pore volume is not easily achieved but has been attempted in studies with resorcinol formaldehyde and some dental resin adhesives (Robinson et al. 1976, 2001). Lesion pores were infiltrated with 2-chloronaphthalene, known to penetrate even the pores of the earliest stages of lesion formation. Quantitative extraction of the 2-chloronaphthalene permitted a determination of accessible lesion pore volume. Subsequent measurement after resin infiltration provided a measurement of volume occluded by resin. This also permitted a measurement of resin shrinkage. This was up to 30 % for the resorcinol preparation but was reduced to almost zero by a second treatment indicating almost 100 % pore occlusion. The method was highly reproducible in artificial lesions (6 % standard deviation) but was less so for natural lesions. This is most likely due to more complex pore structure of natural lesions and the presence of organic material such as proteins in the lesion (Robinson et al. 1998; Shore et al. 2000).

17.3.6 Effects of Infiltration on Carious Tissue

Infiltration as a clinical treatment is still at an early stage so that there is little data on the long-term effects of infiltration on caries lesions. A systematic review has concluded that the treatment is useful for preventing caries progression in lesions with intact surfaces, but studies are required to establish durability of the treatment in terms of tooth integrity as well as caries progress (Doméjean et al. 2015). Some shorter-term investigations have been carried out mainly with regard to cosmetic acceptability of the treatment especially on lesions resulting from stagnation around orthodontic brackets.
These reported an initial improvement in lesion appearance which was sustained over a 6-month or 1-year period. This suggests that resin treatment did not result in a lesion surface which was prone to staining rendering it suitable for visible sites in the mouth (Feng and Chu 2013; Borges et al. 2014; Knösel et al. 2013). It may also suggest that the surface was not rendered more prone to plaque deposition.
Only gold members can continue reading. Log In or Register to continue