Tonsillectomy remains one of the most popular surgical procedures performed worldwide. Its role as a surgical strategy to widen the pharyngeal space for the treatment of obstructive sleep apnea/hypopnea syndrome (OSAHS) in pediatric patients still remains widely accepted, whereas its utility as a sole procedure for the same purpose in adults is quite limited.1 Tonsillectomy remains, however, an important adjunct procedure and an essential component of uvulopalatopharyngoplasty (UPPP). Over the years, many different techniques besides the classic cold knife dissection have arisen, all with variable results when it comes to decreasing the major morbidities of the procedure, such as pain, reduced activity level, hemorrhage, and postoperative decrease in fluid intake, leading to dehydration.

Pain after tonsillectomy is a result of the disruption of the tonsil capsule, thereby exposing the pharyngeal muscle and nerve fibers of both the glossopharyngeal and vagus nerves that supply the tonsillar bed. Once these are exposed to the pharyngeal environment, these tissues become inflamed, which leads to muscle spasm. Inflamed constrictor muscles are a source of intense pain, due to the role these muscles play during swallowing. The intense heat produced by the electrocautery, when used for hemostasis or dissection, causes further tissue damage.

This mechanism is the rationale for developing techniques aimed at performing tonsil reduction without disrupting the capsule: the concept of subtotal capsule-sparing tonsil reduction. In pediatric patients, subtotal tonsil resection showed an earlier decrease in postoperative pain, decreased pain medication requirements, and an earlier return to diet, when compared to traditional total tonsillectomy.2 More recently, temperature-controlled radiofrequency was introduced as a much more effective and safe device for tonsil reduction. The underlying principle of temperature-controlled radiofrequency is the generation of a plasma field at the probe’s surface, which allows for tissue ablation at relatively low temperatures (40–70°C). This plasma field consists of highly ionized particles that break down the molecular bonds of local tissue with a reduction in heat dissipation to surrounding structures, as opposed to coagulation by diathermic methods, which generates temperatures greater than 500°C. The other advantage of the radiofrequency generator is that it can be used for bipolar coagulation, in order to achieve hemostasis during the procedure. The versatility of this technique consists of the ability to design different wands that can generate varying amounts of energy, depending on the need to ablate, to reduce the volume of tissue, or a combination of both. This is determined by the primary indication for tonsillectomy and the anatomical characteristics of the patient. The device can be used as a cutting tool to dissect along the capsular plane of the tonsil, much like a traditional tonsillectomy. It can also be used to create small channels in the tonsil in order to dissipate ionizing energy to the surrounding tissue, thereby causing tissue death days to weeks later. This then leads to shrinkage and tissue volume reduction due to the ensuing fibrosis. This variant, known as radio-frequency ablation, is not frequently performed any more, due to comparatively better results with coblation techniques. When the objective is to perform subtotal tonsil reduction, the instrument can be used to remove tonsillar tissue layer by layer, beginning at the exposed surface while avoiding the underlying capsule (radiofrequency coblation or cold ablation), thus causing significantly decreased morbidity. The difference between ablation and coblation lies in the mechanism of tissue destruction. Coblation primarily shrinks tissue by molecular disintegration (as opposed to heat-induced necrosis), operates at lower frequencies and voltage, and requires a conductive fluid (isotonic saline), which becomes ionized. Coblation of soft tissue produces immediate results, without the need for resorption of necrotic tissue. For this reason, coblation has largely replaced ablation techniques for the purpose of tonsil reduction.

In this chapter, we describe the techniques of total radio-frequency-assisted tonsillectomy and radiofrequency subtotal (capsule-sparing) tonsillectomy. Radiofrequency tonsillar ablation is also briefly mentioned.3

In general, indications for tonsillectomy are updated on a regular basis by the American Academy of Otolaryngology – Head and Neck Surgery. The procedure is indicated for the reduction of chronically enlarged tonsils, when they are associated with obstructive sleep disordered breathing, particularly in children with associated failure to thrive.4 Other indications for tonsillectomy include recurrent streptococcal infection, peritonsillar abscess, and chronic cryptic tonsillitis. Relative contraindications for radiofrequency reduction techniques are asymmetrical tonsillar hypertrophy, clinical diagnosis or high suspicion of lymphoma, history of peritonsillar abscess, and repeated streptococcal infections (recurrent infectious tonsillitis). Such patients should undergo traditional total tonsillectomy, due to the need for complete removal of tonsillar tissue. Patients with chronic or recurrent non-streptococcal inflammatory cryptitis may also benefit from subtotal tonsil coblation.

Coblation can be used for the traditional complete excision of the tonsils. Electrolyte solution is not injected, as coblation is a surface technique in which saline irrigation is utilized. Optimal coblation is achieved with an abundant flow of saline solution. The device used by our group is the Coblator II Surgery System with the EVAC™ 70 Plasma Wand (Arthrocare ENT, Sunnyvale, CA) (Fig. 67.1). Small vessels are sealed as the tissue is dissected, so hemostasis is very effective and efficient. More aggressive hemostasis can be performed if necessary, by operating the wand in the cautery mode. The coagulation setting used is usually 3 to 5. If larger vessels are exposed during total subcapsular excision, the conventional monopolar or bipolar cautery can be used, with a significant increase in postoperative pain due to more extensive tissue injury, and a higher risk for postoperative hemorrhage.

The dissection for total tonsillectomy is similar to the traditional technique. The capsule is identified by blunt dissection. The tonsil is retracted inferiorly and medially with an Allis clamp, and once the capsule is exposed, the wand is used to dissect it from the tonsillar fossa musculature in a superior-to-inferior and a lateral-to-medial direction (Fig. 67.2). Dissection is facilitated by retracting the tonsil inferomedially, due to the creation of a plane under tension. The power is set at a moderate coblation level (6 to 7) and the tip of the instrument is directed towards the capsule, leaving a small space over the tissue, which allows a plasma layer to form. As the dissection proceeds, the fibrous tissue will be preferentially excised. Small blood vessels are fused as they are encountered, by applying more pressure with the tip of the wand. 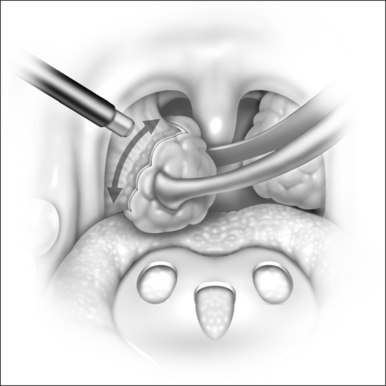 Fig. 67.2 Total tonsillectomy (radiofrequency assisted). A plane is created by retracting the tonsil inferomedially, and the wand is used to dissect it from the tonsillar fossa musculature in a superior-to-inferior and a lateral-to-medial direction.