Fig. 8.1
During the formation of the root, the apical part is widely open at the onset of root formation (a) and gradually restrained in the three successive stages (b–d). Cementum (C) deposition contributes to apexification 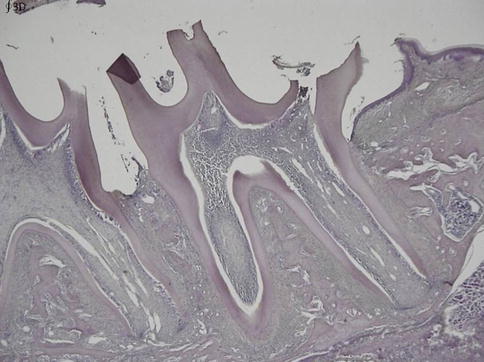 Fig. 8.2
At date 21 the full length of the root is achieved, but there is still a gradual reduction in width of the pulp, together with an increased dentin formation in the root 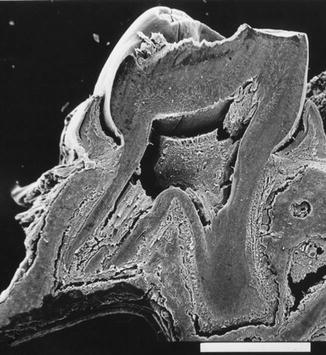 Fig. 8.3
Scanning electron microscopy (SEM). Longitudinal section of a mandibular molar during the formation of roots. Bar, 1,000 μm
In the root, tubular orthodentin formation is seen in the labial and lingual parts, whereas fibrodentin is added in the mesiodistal surfaces of the root canal lumen. This age-related variation gave the root canal lumen an oval profile. The dentin heterogeneity leads to a smaller pulp volume in the elderly (Fig. 8.4). 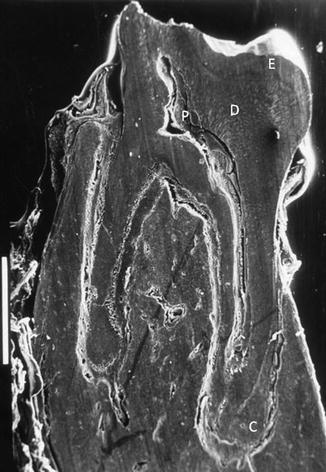 Fig. 8.4
SEM. Longitudinal section of a mandibular molar. The roots are totally formed. The dentin (D) thickness is maximal, and the pulp (P) volume is reduced. Cementum (C) extends and is observed in the apical part of the roots
During aging, the dental pulp is enriched gradually by fibrous bundles of collagen. Noncollagenous proteins located in the so-called ground substance are somehow restricted, whereas the pulp is enriched in lipidic inclusions and pulp stones. The pulp response time is increased in older people, whereas pain intensity decreases.
With age odontometric changes have been noted with respect to pulp cell density, pulp area, and dentinal thickness. Cell density of odontoblasts, sub-odontoblasts, and pulp fibroblasts is decreasing. There is also a decrease of age-related changes in the root, which is more pronounced than in the crown. Cell density in the crown was greater than in the root (Fig. 8.5). Dentinal deposition is greater in the root compared to the crown [3]. 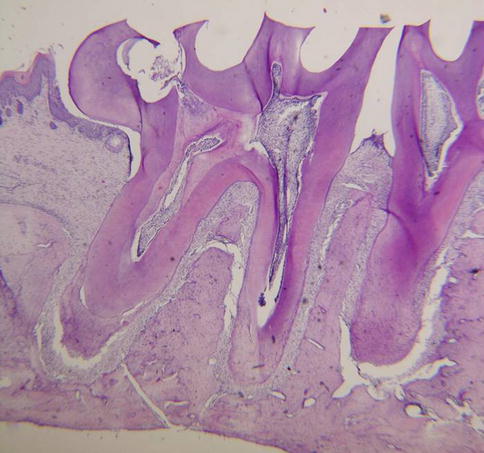 Fig. 8.5
Three-month-old rat. The apical part of the root is closed

Gustafson’s method for age determination from the teeth is based on 6 age-associated parameters evaluated on ground sections [4]. The transparency of radicular dentin and secondary dentin deposition constitute the two major criteria. Cementum apposition, periodontal and root recession, and attrition should also be taken into account.
The age-dependent nonenzymatic changes of d– and l-forms of aspartic acid constitute a reliable and accurate method, tooth dentin being considered as one of the best target tissues. Analysis of osteocalcin and elastin also provides accurate results [5]. A strong correlation was found between the population ages and translucency of dentin. Staining abraded sections with 1 % methylene blue stains the “normal” tubular dentin, whereas sclerotic dentin remains unstained. This is probably due to the precipitation of non-apatitic calcium phosphate within the lumen of the tubules. Intratubular mineralization remains unstained by the dye. The cementum took a dark blue color.
Aging can be distinguished from senescence, defined as an essential irreversible arrest of cell division. Senescent cells are metabolically active but no longer capable of dividing. Replicative senescence is an irreversible loss of division capacity of human cells in vitro after a reproducible number of population doublings. Senescence is the only one possible outcome of a DNA damage response, the other possibilities leading to DNA repair or apoptosis [6]. Senescent cells remain alive and differ from apoptotic cells that are enriched in transglutaminase. They display rigidified thicker cytoskeletal proteins and plasma membrane. After the apoptotic disintegration, apoptotic bodies are engulfed by tubulovesicular endocytic vesicles and degraded inside macrophage lysosomal structures. It differs also from cell cycle arrest.
Aging is characterized by the reduction in length of chromosomes [7]. Telomeres form the end of human chromosomes and senescence-associated distension of satellites (SADS). They shorten with each round of cell division and 50–100 bp are eliminated at each cell division. This mechanism limits the proliferation to a finite number of cell divisions. Telomere extends up to a certain length, and then cells stop dividing. The cells enter in senescence. Telomere shortening limits stem cell function, regeneration, and organ maintenance during aging. It is due to an “end replication problem” of DNA polymerase. In addition, processing of telomeres during the cell cycle and reactive oxygen species may contribute to telomere shortening. The telomerase RNA serves as template for telomere sequence synthesis. The telomerase reverse transcriptase is the catalytic subunit of the enzyme. Active during embryogenesis, telomerase is suppressed postnatally. The gradual loss of telomeres is a regulator for cell life span. Telomerase activity counteracts the gradual loss of telomeres by de novo synthesis of telomere repeats. Telomerase declines by age [8].
Generation of induced pluripotent stem (iPS) cells was obtained by introducing genes encoding pluripotent transcription factors into fibroblasts. Reprogramming of somatic cells of old patients is associated with full re-elongation of telomeres to size comparable with embryonic cells [9].
Beta-galactosidase activity seems to be associated with senescence and with lysosomal dysfunction. As marker, beta-GAL is questionable [10]. However, it is recognized that the senescence β-galactosidase staining was higher in senescent pulp cells than in young cells. They contain greater expression of autophagic proteins (microtubule-associated protein light chain 3 and Beclin 1) than young cells [11].
This is also established for human dental pulp stem cells that STRO-1, nestin, CXCR4, Sox2, nucleostemin, CD90, and CD166, which are considered as well-identified markers, play a role in pulp cell senescence. Ink4a/Arf expression is a robust biomarker of aging. The gene locus encodes two tumor suppressor molecules, p16INK4a and ARF, which are principal mediators of cellular senescence [12]. Generation of p53 +/m mice and other p53 mutants suggests that this gene has a role in regulating organismal aging [13].
Using microarray and RT-PCR, age-related changes in the expression and composition of third molar pulps of young subjects (age group 18–20 years) were compared to older patients (age group 57–60 years).
In young dental pulp, growth factors such as bone morphogenetic protein, TGF, growth factor differentiation family, platelet-derived growth factor α, vascular endothelial growth factor α, and FGF family were highly expressed, suggesting that they regulate the genes controlling cell proliferation and cell differentiation, and were responsible for signaling of many key events in tooth morphogenesis and differentiation.
In the aging pulp, vascular, lymphatic, and nerve supplies decline. Fibroblasts decrease in size and number. A reduction of 15.6 % was scored for crown odontoblasts and 40.6 % in root odontoblasts. The secretory activity was decreased, suggesting that the reparative capacity was compromised. Furthermore, age-related changes include a higher number of collagen cross-linkages, more collagen fibers, lipid infiltration, and calcifications. In the mature tooth, recruitment of dental pulp stem cells allowing their differentiation toward odontoblast cells for dentin bridge formation occurs. The deposition of secondary dentin increases, and the blood, lymphatic, and nerve supply undergo arteriosclerotic changes. This evidences age-related degenerative changes, together with a progressive mineralization. In older dental pulp there was an upregulation of proapoptotic genes like AIFM1, MOAP1, PDCD5, and PDCD7, confirming a possible correlation between apoptosis and the reduction of dental pulp volume. However, the expression in older dental pulp of growth factors like CTGF, FGF1, FGF5, and TGFB1, and genes implicated in the synthesis of collagenous proteins, confirms that, even reduced, the reparative processes were continuous during the entire tooth life [14].
Senescent fibroblasts are flat and display heterogeneous cell shapes. With respect to intracellular proteins, connexin 43 mRNA was abundantly expressed in young adults (about tenfold higher in young adult) and decreased in aged human dental pulp [15]. Vimentin filaments, parallel with the long axis of the cells, are overproduced by senescent fibroblasts [16]. Expression of Cbfa-1 mRNA, VEGF, and HS27 mRNAs was higher in the adult first molar compared with the young animals [17].
Only gold members can continue reading. Log In or Register to continue