Fig. 1.1
Schematic representations of the approximate anatomical coverage provided by different fields of view of a CBCT unit. (a) Small FOV, (b) medium FOV, and (c) large FOV
In almost all units, a smaller FOV scan is acquired using a smaller voxel size, thus yielding images with higher spatial resolution. Furthermore, a smaller FOV also reduces scattered radiation, decreasing image noise and contributing to improved image quality. This is particularly important given that many of the endodontic diagnostic applications require higher resolution, for example, evaluation of the periodontal ligament space and lamina dura. Selection of the appropriate FOV should be made considering not only the anatomic coverage but also the image resolution required for the diagnostic task. For example, in a patient with atypical odontogenic pain, all the teeth in a selected quadrant may need to be imaged to rule out an odontogenic cause for the pain. Such patients may possibly benefit from two adjacent limited FOV scans, rather than a single medium or large FOV scan. In this scenario, the lower image resolution with the medium/large FOV scan is likely to compromise critical evaluation of the apical periodontal structures.

The smallest three-dimensional data unit on a CBCT image volume is the voxel. The voxel size depends on the size of the detector pixels, which in current CBCT systems ranges from 0.07 to 0.4 mm. In general, a CBCT scan acquired with a smaller pixel size produces an image with higher spatial resolution. Nevertheless, the detector pixel size is not the only determinant of image resolution. Several other machine-specific parameters such as CT reconstruction algorithms and image processing “filters” modulate the signal-to-noise ratio and image resolution.
In many CBCT units, the voxel size is predetermined for a specific FOV. Typically, smaller FOVs are imaged using a smaller pixel size. In some CBCT units, the operator can manipulate the pixel size for a given FOV. For these protocols, imaging at a smaller pixel size is accomplished by either increasing the number of basis projections or increasing the radiation exposure factors. Clinicians must be aware that these protocols will deliver a higher patient radiation exposure, compared with the standard protocol.

The CBCT imaging process starts by making sequential two-dimensional projections along hundreds of angles around the area of interest. Each projection represents a map of x-ray attenuation by objects along the path of the x-ray beam. Mathematical algorithms are applied to this attenuation data to spatially reconstruct the locations of the structures within the imaged volume. There are several factors that influence the accuracy of the reconstructed data. These include discretization of the imaged object, geometrical projection issues, detector noise, and the assumptions in mathematical modeling. Discrepancies between the reconstructed data and the physical state of the actual object may be evident in the image and are termed artifacts. There are several different artifacts described in CT imaging. These include beam hardening artifacts, photon starvation artifacts, cupping artifacts, and partial volume averaging. Schulze et al. [7] provide an excellent description of the physical basis for and the appearances of these various artifacts.
Beam hardening artifacts are noted around dense bony structures and around radiopaque restorations and endodontic filling materials. Clinicians who use CBCT must be aware of the appearances of such artifacts and not confuse them with pathological changes. For example, metallic restorations will result in dark bands and streaks (Figs. 1.2, 1.3, and 1.4). The dark bands which extend to the region around the restoration and to the crowns of the adjacent teeth may be interpreted as caries. When these bands appear on the crowns or roots of adjacent teeth, they may be misinterpreted as caries or root fractures. Likewise, the region around metallic posts and gutta-percha yields dark bands, which may compromise the ability to detect fractures or resorption of the adjacent root structure.

Fig. 1.2
(a) Axial slice demonstrating metallic restorations in the second premolar and first molar teeth. Note the radiating pattern of dark bands and streaks. Note how linear artifacts are evident on the root of the adjacent first premolar. (b) Sagittal CBCT section through the maxillary central incisor. Note the dark zone around the metallic post

Fig. 1.3
(a) Sagittal slice demonstrating metallic restorations in the second premolar and first molar teeth. Note the dark bands on the molar crown (big arrow) and the crown of the second premolar (small arrow). (b) Same section as in panel A. Note how adjusting the density and contrast allows for better visualization of the crown and root surfaces in the regions of the dark bands, further confirming their artifactual nature 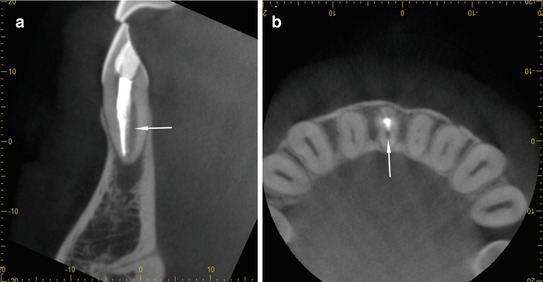 Fig. 1.4
(a) Sagittal and (b) axial slices through the mandibular anterior region. Note the presence of an unfilled canal in the central incisor (arrows). This additional canal should not be confused with artifacts from the radiopaque gutta-percha

In contrast to deterministic effects, there is no minimum threshold dose for causing stochastic effects. This implies that even low levels of radiation exposure could trigger stochastic effects. The probability of causing stochastic effects decreases with decreasing radiation dose, and this is the basis of dose minimization in diagnostic radiology. Examples of stochastic effects include radiation-induced neoplasia and heritable effects of radiation.
The principal risk from diagnostic maxillofacial CBCT imaging is the risk of radiation-induced neoplasia. The association between radiation exposure and cancer has been firmly established both by animal studies and by studies of human populations that were exposed to ionizing radiation, either intentionally or by accident. These studies have demonstrated some basic concepts that have important implications in radiation safety and protection:
It is currently accepted that ionizing radiation-caused DNA damage is the initial trigger for radiation-induced cancer. Even a single photon can produce radicals to cause DNA damage, and this explains the stochastic nature of radiation-induced neoplasia. The number of radicals produced increases with dose, and thus, the likelihood and extent of radiation-induced DNA damage increases with radiation dose. The current model for estimating radiation-induced cancer risks is based on the linear no-threshold hypothesis (LNT), which assumes that the risk of radiation-induced cancer increases linearly with increasing radiation dose. This hypothesis is based on scientific data that demonstrate such a linear dose response, although at doses typically above 100 milliGray (mGy). The nature of the risk at doses in the order of a few tens of mGy has not been experimentally established. Nevertheless, the assumptions of the LNT model have not been disproven, and thus, regulatory agencies continue to use this model to conservatively estimate risk and develop policy guidelines on radiation exposure to occupationally exposed individuals and members of the public.
Only gold members can continue reading. Log In or Register to continue