Antimicrobial photodynamic therapy works as a combination of photosensitizer and light. Photosensitizer is a light-sensitive chemical that possesses low toxicity in the absence of light. Photosensitization of the infected tissue with a photosensitizer allows uptake into the bacterial cells, and irradiation of the photosensitized tissue results in the destruction of bacteria and infected tissue. It is extremely important that the light should be at a specific wavelength, which corresponds to the absorption wavelength of the photosensitizer being used. PDT can be utilized with a suitable photosensitizer and irradiation conditions to treat infections in cases where antibiotic-based therapeutic strategies have failed [8]. Unlike in cancer therapy where the photosensitizer is administered intravenously, for localized infections, the photosensitizer is delivered locally by various methods such as topical application, instillation, and interstitial injection or aerosol delivery. Selectivity of photosensitizer toward microorganisms over mammalian cells and effective removal of the causative microorganisms are the key points in achieving success of PDT to manage localized infections [7].
Photosensitizers are chemicals, when excited, capable of transferring the energy absorbed to other compounds in the vicinity that, in turn, generate very reactive metastable species. The triplet-excited state of the photosensitizer releases energy to come to the ground state via two specific mechanisms: type I or type II pathway [18]. Type I pathway involves production of radical ions of oxygen due to electron transfer from the photosensitizer triplet-excited state to the substrate. Radical ions such as superoxide, hydroxyl, and lipid-derived ions are the cytotoxic species responsible for type I photoreaction [19]. Type II pathway involves production of excited singlet oxygen due to energy transfer from the photosensitizer triplet-excited state to the ground-state molecular oxygen, which is responsible for the oxidation of various cellular constituents [20]. The antimicrobial effect of PDT is mainly due to type II reaction. Singlet oxygen is a strong oxidizing agent and thus highly reactive, with a lifetime of less than 0.04 μs in a biological environment and a radius of action of less than 0.02 μm [21]. The reactions of singlet oxygen with the cellular targets lead to cell death. The above two basic mechanisms account for this lethal damage to the bacterial cell by DNA damage and cytoplasmic membrane damage. Figure 14.2 shows the photodynamic inactivation of bacterial cells in a stepwise manner. It should be noted that the differences in microbial cell wall characteristics and bacterial growth mode should be accounted while determining the duration of photosensitization before light illumination [22, 23]. The photosensitizer with slower uptake could result only in cell wall damage and with longer incubation times; other nuclear effects such as nucleic acid strand breakage might be apparent. The choice of photosensitizer is thus critical in obtaining effective bacterial elimination. 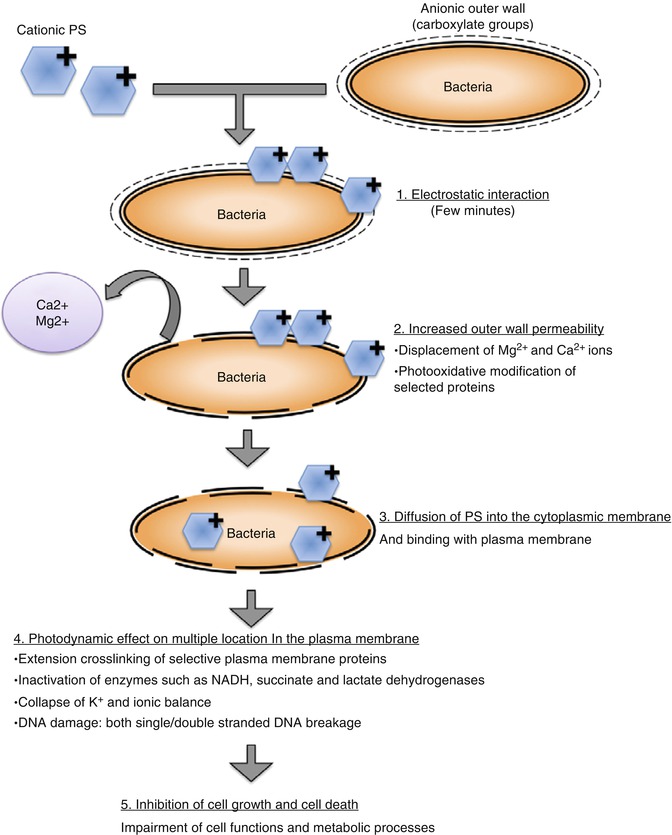 Fig. 14.2
Schematic showing the stepwise mechanism of photodynamic inactivation of microbial cells
One of the significant advantages of PDT is the targeted antibacterial effect. Choosing a photosensitizer that has high affinity for microbial cells and irradiating the specific area of infection could result in the targeted effect of antimicrobial PDT. As the photosensitizer typically shows a higher affinity toward microbial cells, the host cells could be affected less during PDT. Toxicity of the photosensitizer usually occurs when high concentration/volume of photosensitizer is applied to a tissue to obtain more significant treatment response. The instant antimicrobial activity also offers added advantage as antibiotics take several days to produce comparable efficacy. The broad therapeutic window of PDT because of the high reactivity of ROS could effectively eliminate bacteria as well as the bacterial virulence factors such as endotoxins and proteolytic enzymes. Furthermore, due to the multiple targets of PDT on a bacterial cell, the probability of bacteria developing resistance to this treatment has been considered to be almost impossible [7, 8, 24].
Photosensitizers such as porphyrins, chlorins, and phthalocyanines, for treatment of cancer or other diseases, are chosen based upon their low dark toxicity to mammalian cells and ability to target tumor cells [8]. The photosensitizers for antibacterial PDT are chosen based on their specificity to bacterial cells. Large numbers of photosensitizer potentially useful in LAD are currently in various stages of clinical trials for FDA approval. The commonly used photosensitizers for antibacterial purpose are halogenated xanthenes such as rose bengal (RB) [25], phenothiazines such as methylene blue (MB) and toluidine blue (TBO) [9, 22, 26], and perylenequinones such as hypericin [27]. The factors that determine the effectiveness of antibacterial PDT are method/vehicle of topical application, effective time of interaction with the microbes at the site of infection, selectivity of the photosensitizer to microbes, relative non-toxicity toward host tissues at the site of infection, and ability to eliminate the microbes effectively to avoid regrowth of surviving pathogens following treatment [8].
Antimicrobial PDT on gram-positive and gram-negative bacteria induced breaks in both single and double-stranded DNA and the disappearance of the plasmid supercoiled fraction [28, 29]. In addition, the photooxidative effect caused by the phenothiazinium photosensitizer in bacteria led to the damage of multiple targets in bacterial cells such as DNA [28], membrane integrity [30], protease activity, and lipopolysaccharide (LPS) [31]. George and Kishen reported functional impairment of cell wall, extensive damage to chromosomal DNA, and degradation of membrane proteins following methylene blue-mediated APDT of E. faecalis [32]. These findings support the hypothesis that antimicrobial PDT is a feasible alternative to antibiotics since the mode of action is markedly different from that typical of most antibiotics and chances of resistance are potentially none. 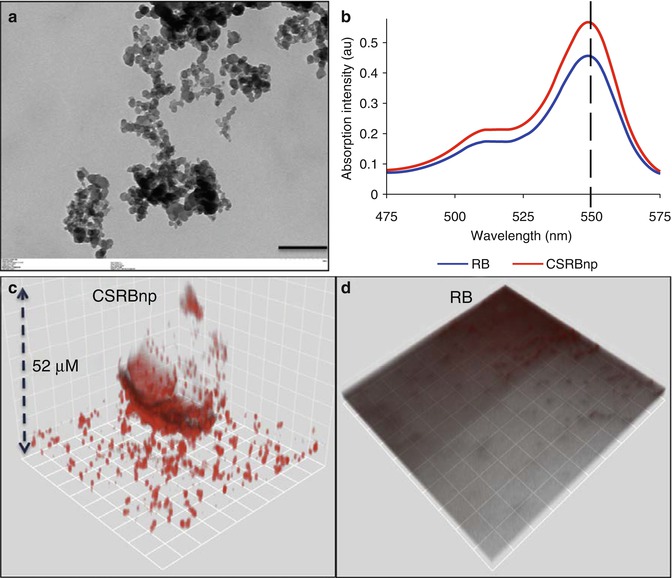 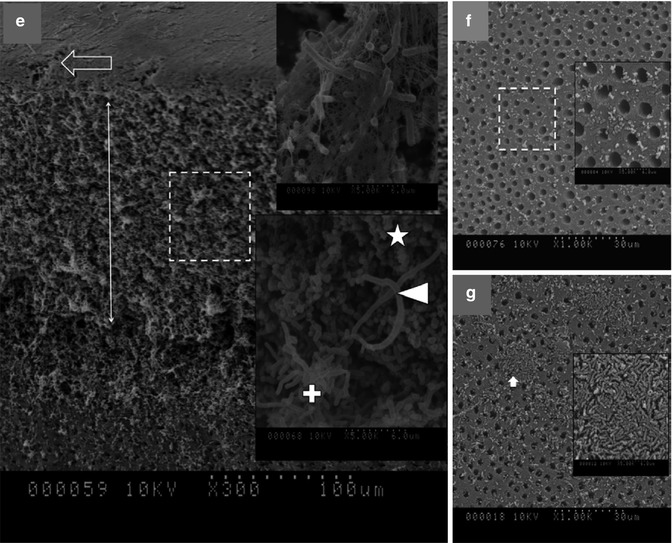 Fig. 14.3
(a) Transmission electron microscopic image of CSRBnp (scale bar = 200 nm). The CSRBnps were 60 ± 20 nm in size. (b) A typical graph showing the absorption spectrum of RB and CSRBnps. The absorption peak at 550 nm was not affected after conjugation of CSRBnps with RB. (c, d) The uptake of CSRBnps and RB into the E . faecalis biofilms as observed under CLSM. (e–g) Scanning electron microscopic images of multispecies biofilms on dentin sections. (e) The 3-week-old biofilms presented as a uniformly thick matlike structure covering the entire dentin surface. Three specific bacterial morphologies are evident in higher magnification (Denoted by *, + and block white arrowhead). The surface showed an abundant polymeric matrix (open arrowhead) (magnified area shown by the open arrow). (f) CSRBnp treatment rendered the dentin surface clean of the biofilm with open dentinal tubules. (g) RB treatment showed cleaner areas of dentin along with dense bacterial aggregates (inset: magnified area shown by the white arrow) (Adapted with permission from Shrestha and Kishen [61]) 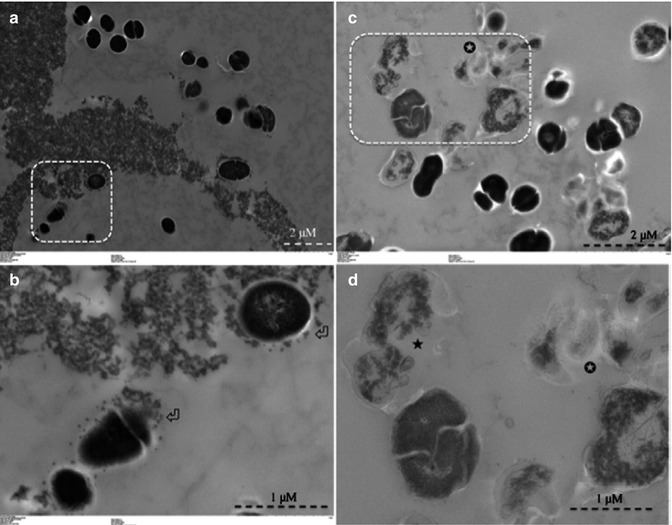 Fig. 14.4
Transmission electron microscopy images for planktonic E. faecalis after treatment with CSRBnp for 15 min (a, b). Aggregates of CSRBnp could be seen surrounding the bacterial cell. Nanoparticles were found attached to the bacterial cell surface and forming an envelope (open arrows) (b). The cells did not show any disruption of morphology. Following PDT of the sensitized bacteria, various stages of membrane damage as well as release of cell constituents were evident (c, d). Most of the bacteria showed some kind of cell membrane disruption (black star) and release of cell constituents at higher magnification (d) (Adapted with permission from Shrestha et al. [48])
Only gold members can continue reading. Log In or Register to continue