Fig. 3.1
(a) Radiograph of implant and associated cement. (b) Clinical picture after surgical flap elevation. Cement on the surface of an implant with extensive bone loss associated with this disease. (c) Implant is removed with cement residue
A common misconception is that it is only the type of luting cement used that either results in an implant disease process or not. Any cement can lead to destruction around an implant, although in truth some cements may have more issues than others; the disease process, like most diseases, is multifactorial.
Factors such as understanding why implants are vulnerable to cement-induced disease process due to biology, depth, environment, implant materials, cement properties, cement application, abutment design, and maintenance are all important if peri-implant diseases are to be prevented.
Dentists are familiar with dealing with the natural dentition and as such have taken many of the concepts and techniques used when restoring a tooth with a cemented restoration and transferred them to the cemented implant restoration. This must be considered an error. Teeth and implants have very different requirements with respect to how the tissues attach, the depth of margin placement, the disease susceptibility, and the core materials of the abutment (enamel and dentine for the tooth versus ceramics, zirconia, or metal for the implant; Figs. 3.2 and 3.3a–c). 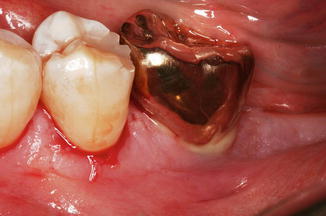 Fig. 3.2
This case shows the effects of residual excess cement resulting in peri-implant disease with suppuration a common finding

Fig. 3.3
(a) Bone loss in a classic crater-type form; excess cement is noted on the implant body. (b, c) The crater is noted to extend 360°, with bone loss evident (Photos courtesy of Amy Fuller, DDS, and Brian Fuller, DDS)

It is unclear why the cement should cause an issue, as well as to what role the cement plays in this process. It is possible that the cement is simply passive and acts as a physical bacterial trap, rather like an overhang on a restoration or calculus effects on the natural dentition (Fig. 3.4). It is also possible that the cement plays more of an active role, as the destruction of the peri-implant tissues (hard and soft) is frequently aggressive and extensive (Fig. 3.5a, b). The disease may be different between patients, and even within the same patient. It may be due primarily to one major factor or a combination of factors (Figs. 3.6, 3.7, and 3.8a, b). 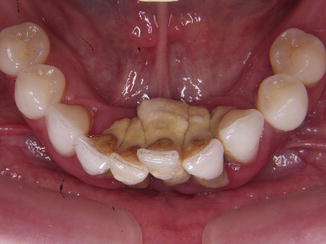 Fig. 3.4
Calculus around these teeth presents an issue due to bacteria associated with it. In itself, it may be considered having more of a “passive” than “active” role in periodontal disease

Fig. 3.5
Facial (a) and palatal (b) photographs of a site affected by residual cement. The resultant disease process is clear. Can this response truly be considered passive like an overhang, or did the cement somehow contribute to the breakdown and have an “active” role?

Figs. 3.6 and 3.7
A deep probing noted around these implants. Surgical evaluation with remnants of excess cement noted on these two failing implants. Is it possible so much destruction would have occurred if the cement were simply a passive component in the disease process like an overhang?

Fig. 3.8
(a) Was there always going to be an issue with this implant and the cement is simply there as a result, or did the cement get into the site and cause the problem? (b) Debrided site
There are currently four potential causes of peri-implant disease as it relates to residual cement: microbiology, foreign body reaction, allergic response, and alterations in implant surfaces.

Wilson suggested that the disease process he noted may be microbiological in nature. This was in part due to the time it took for signs and symptoms to develop. This ranged from 4 months to 9.3 years after the cement-retained implant restoration was placed.
Certainly the environment around implants is conducive to Gram-negative pathogenic bacteria. Depths of 5–7 mm adjacent to a papilla provide anaerobic sites that allow for their potential growth. Although much has been reported on physical and chemical properties of cements, there appears to be nothing related to how cements interact with sites that may harbor these bacteria. An ongoing research project the author is involved with at the University of Washington has recorded variations in the growth patterns of media containing Aggregatibacter actinomycetemcomitans (Aa), Fusobacterium nucleatum (Fn), and Porphyromonas gingivalis (Pg) when exposed to different cements.
The study involved the University’s graduate periodontal and microbiology departments and formed the basis of Dr. Neal Raval’s Master’s thesis. To the authors’ best knowledge, this is the first data on evaluation of cements with these specific microbes.
Five cements reported to be used for implant restoration were chosen: zinc oxide eugenol (TempBond, Kerr), zinc oxide non-eugenol (TempBond NE, Kerr), acrylic urethane (Premier Implant Cement, Premier), zinc orthophosphate (Fleck’s, Mizzy); and acrylic (Multilink Implant cement, Ivoclar Vivadent). Disks of the test cement were fabricated under strict aseptic conditions. Bacterial solutions containing individual anaerobic bacterial species were produced. The test cements were placed within the bacterial media and incubated (Fig. 3.9) for 48 hours. Two tests were then done with the cement disks. The first was to determine how they affected the bacteria in the solution (planktonic growth)—were they inhibitors to growth or did the bacteria use the cement as a substrate? The second test compared how many bacteria attached themselves to the cement disk itself (biofilm growth). 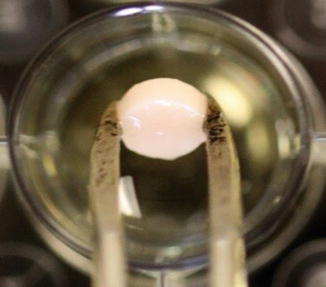 Fig. 3.9
Planktonic growth: test cement disk being introduced into bacteria-containing media
To measure the planktonic effect of the cements, optical density of the solutions was used. In essence, a light beam (wave length 600 nm) was passed through the solution and the opacity measured, which gave an indication of bacterial loading. The opacity of the solution was directly related to the quantity of bacteria present.
The positive control for the planktonic growth was media with bacteria but no cement disk. This represented how the bacteria would grow without external influence. The negative control was the media alone, no bacteria. This was to ensure that none of the samples had any contamination. In effect, the media alone was sterile and appeared clear. The positive and negative controls were used as reference markers against which the cement in bacterial media could be compared (Fig. 3.10a, b).

Fig. 3.10
(a) Sample 24 well plate showing four test cements and how they affect bacterial planktonic growth. Note the wells that do not contain cement are positive and negative controls. (b) These two tests show different results. The opaque test well indicates considerably more growth of bacteria compared to the clearer solution
The results indicated a distinct pattern with respect to planktonic growth, with some cements inhibiting bacterial growth in the media, in some instances reducing the bacterial load to a degree comparative with the negative control. This was most frequently noted with the zinc oxide-containing cements. In contrast, Multilink had very little effect on bacterial inhibition; in some cases it even appeared to promote bacterial growth compared to the positive control (bacteria grown without cement in media), as expressed in Figs. 3.11, 3.12, and 3.13.

Fig. 3.13
Graph showing mean and standard deviations relating planktonic growth of Fusobacterium nucleatum (Fn) with the test cements and controls (Reproduced with permission from John Wiley and Sons: Raval et al. (2014). © 2014 Wiley Periodicals, Inc.)
Once it was established that differences among the cement samples existed with respect to how they may change the microbial environment into which they are placed, the second study was done. This was to evaluate if there was a difference in adhesion of these Gram-negative bacteria to the cement disk. All the disks were made in a similar manner under aseptic conditions by mixing the cement on sterile pads according to the manufacturer’s instructions. The cement was carefully loaded into identical dimension matrix washers then placed between two sterile glass plates and allowed to set. The aim of the glass was to produce similar surface details macroscopically for the test cements. It was understood that the microstructure would differ significantly due to individual cement type differences. The two test cements evaluated were TempBond (having the greatest inhibitory effect on planktonic growth) and Multilink Implant cement (the least inhibitory effect). To determine how many bacteria existed on the cement disks, they were removed from the media after 48 hours incubation, washed in sterile media, and then placed in an Eppendorf Tube with 200 μl of fresh media. The disks were then agitated vigorously to remove the more tightly adherent bacteria. The media was collected and plated on agar plates and incubated under anaerobic conditions.
After 4 days, the colony forming units (CFUs) were recorded for each bacteria–cement combination (Figs. 3.14 and 3.15). 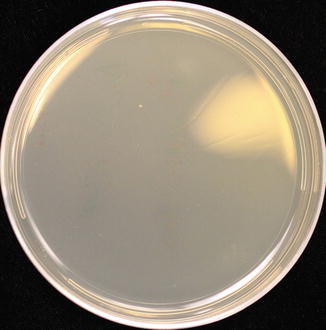 Fig. 3.14
A typical example found with TB with no biofilm growth on the agar plates with Aggregatibacter actinomycetemcomitans (Aa) and Fusobacterium nucleatum (Fn) 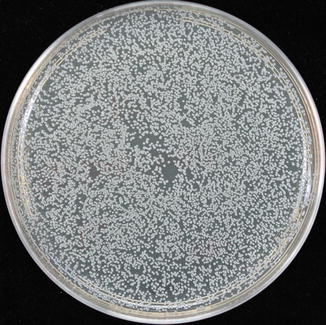 Fig. 3.15
Typical example of biofilm growth found with ML on the agar plates with Aggregatibacter actinomycetemcomitans
Only gold members can continue reading. Log In or Register to continue