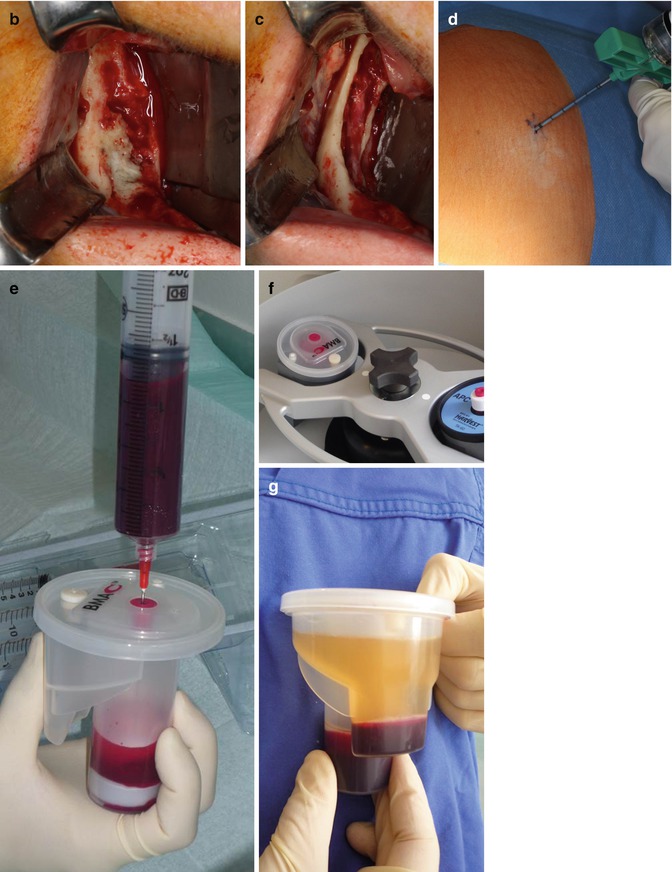 Fig. 10.1
(a) Preoperative cone beam CT of a 57-year-old female patient suffering from bisphosphonate-induced osteonecrosis of the jaw in the right mandible after oral bisphosphonate treatment for osteoporosis due to rheumatoid arthritis and glucocorticoid treatment. (b) Intraoperative exposure of the osteonecrotic lesion in the right mandible. (c) Exposure of the inferior alveolar nerve after complete removal of the affected bone. (d) Puncture of the posterior iliac crest for sampling of 50 ml bone marrow aspirate. (e) Transfer of the bone marrow aspirate into the SmartPReP2 centrifuge. (f) The suspension is centrifuged for 14 min. (g) Close-up of the smaller of the two chambers of the BMAC™ kit. The white line is composed of mononuclear cells including progenitor cells and mesenchymal stem cells. (h) BMAC is mixed with autologous thrombin and inserted under a collagen membrane. (i) The defect is covered with a multiple layer technique. After slitting of the vestibular periosteum, the mobile part is quilted under the lingual mucoperiosteal flap. (j) The wound is closed with backstitches and a running suture

Growth Factors in Treatment of Medication-Related Osteonecrosis of the Jaw

Growth factors are soluble-secreted signaling polypeptides capable of instructing specific cellular responses in a biological environment [48]. The specific cellular response triggered by growth factor signaling can result in a very wide range of cell actions, including cell survival, control over migration, differentiation, or proliferation of a specific subset of cells [49]. A variety of growth factors produced by osteogenic cells, platelets, and inflammatory cells—including bone morphogenetic proteins (BMPs), insulin-like growth factors 1 and 2, transforming growth factor-β1 (TGF-β1), platelet-derived growth factor, and fibroblast growth factor 2—are functionally involved in bone healing. The bone matrix serves as a reservoir for these growth factors [50–52].
Growth factor application to patients suffering osteonecrosis of the jaws can be considered a challenge because of improving the soft and hard tissues healing. Acting like chemotactic agents, they stimulate angiogenesis, migration, proliferation, and differentiation of stem cells from the surrounding mesenchymal tissues into bone-forming cells in an area of injury [53, 54].
The discovery of bone morphogenic proteins (BMPs) as osteoinductive factors and the subsequent development of commercially available recombinant forms of BMPs have offered the potential to replace traditional grafting techniques with de novo bone formation [55, 56]. Bone morphogenetic protein type 2 (BMP-2) application substituting the necrotic bone removal could be considered a therapeutic option for reconstruction of localized bone defects of medication-related osteonecrosis of the jaws. rhBMP-2 was applied using an absorbable collagen sponge carrier to 20 patients who underwent surgical removal of necrotic bone related to bisphosphonate therapy. The collagen was fixed to the soft tissue by an absorbable suture. The postoperative controls showed an increase in the soft tissue healing and new bone formation of the treated sites [57].
Some researchers have proposed also the use of platelet-rich plasma (PRP) in ONJ surgery based on surgical debridement and reconstruction combined with the use of platelet-rich plasma produced from the patient’s autologous blood [58–68]. The rationale for the employment of PRP in patients affected by osteonecrosis of the jaws is based on the thesis that the presence of growth factors constitutes stimulations for bone healing, which is similar to physiological healing. The growth factors in platelet-rich plasma might accelerate epithelial wound healing, decrease tissue inflammation after surgery, improve the regeneration of bone and soft tissues, and promote tissue vascularization. The additional advantages related to the use of this product are its biocompatibility and safety as an autologous product [69, 70].
In a prospective study, Scoletta et al. reported of only one wound dehiscence after extraction of 202 teeth in 63 patients under intravenous bisphosphonate treatment. After extraction, the sockets were filled with scaffold-like autologous PRP [71]. In a case series of 25 patients with osteonecrotic lesions due to bisphosphonate intake, treatment of ONJ with a combination of bone resection and platelet-rich plasma was found to be an effective therapy that should be considered an alternative treatment modality for the management of advanced ONJ cases [72].
Lee et al. also described the successful management of complications of dental implant surgery of 2 patients taking the oral form of bisphosphonates, including platelet-rich plasma and hyperbaric oxygen [60]. Several other studies reported of enhanced mucosal healing of patients with ONJ due to bisphosphonate intake treated with surgical removal of the exposed bone, platelet-rich plasma, and primary closure under antibiotic coverage [61–63, 65].
Nitrogen-containing bisphosphonates are able to inhibit pyrophosphate synthase in the mevalonate pathway. The consequently decreased synthesis of the metabolite geranylgeraniol is believed to largely account for the development of bisphosphonate-induced osteonecrosis of the jaws. In an in vitro study, Ziebart et al. demonstrated that geranylgeraniol can rescue the negative effect of bisphosphonates in human umbilical cord vein endothelial cells, fibroblasts, and osteogenic cells [73]. Geranylgeraniol could lead to new treatment strategies for bisphosphonate-induced osteonecrosis of the jaws that have to be proven in animal studies.