History of Osteonecrosis of the Jaw

Fig. 19.1
Friedrich Wilhelm Lorinser (1817–1895) (Reprinted from Lecky [10])
Yellow phosphorous was used in manufacturing “strike anywhere” matches (Fig. 19.2). The yellow phosphorus-tipped match was developed around 1830 [4] and named Lucifer matches by Samuel Jones in 1829 [5]. Primarily, factory workers called “dippers,” “mixers,” and “boxers” came to close contact with yellow phosphorous. “Mixers” had to heat phosphorous for the dippers, who dipped the wooden pins of the matches into it. After drying, the “boxers” sorted and packed the finished matches into matchboxes [4–6]. Match production did not require strength or special skills and was ideal for low-income families working from home. A nursery rhyme dating back to those times describes the practice of child labor in that context: “The match box, the match box was hard to make at three, but now I am four or rather more, it is easier for me” [5]. 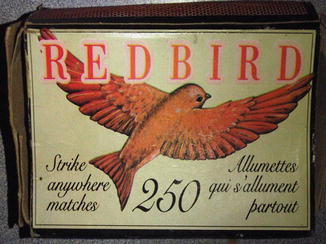 As in contemporary medication-related osteonecrosis of the jaw, the workers of the nineteenth century developed severe jaw infections, mostly after tooth extractions. Mortality in those pre-antibiotic days was as high as 20 % [4, 7]. Besides palatinal spreading (a stage 3 equivalent) to the orbital bones, the infection could also affect the eyes with subsequent atrophy of the eyeball (Fig. 19.3). Besides that pathological fractures of the mandible and fistula formations have also been described (Fig. 19.4). Meningeal inflammation and cerebral abscesses were feared complications [8, 9]. The connection between osteonecrosis and extraction of infected teeth was obvious [4, 6, 9–11]. According to Miles, the typical course was described by Simon as follows: “Typically a dull red area developed on the gum, usually in relation to an infected tooth. An indolent ulcer formed or, following the extraction of the tooth, the socket refused to heal and the soft tissue inflammation persisted. There was relatively slow progressive extension with eventual separation of a sequestrum which is classically described as porous and light in weight and presenting a worm-eaten appearance likened to pumice-stone” [12]. 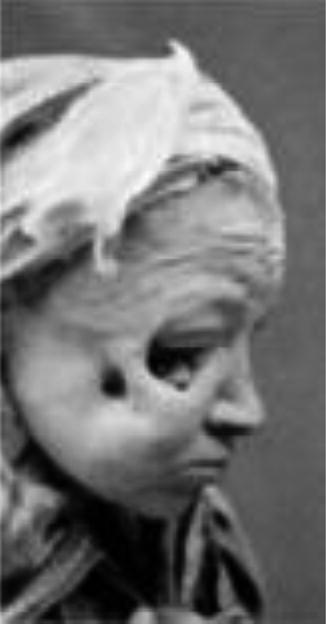 Fig. 19.3
Necrosis of the upper jaw with destruction of the eyeball. Case presented by Teleky (Reprinted with kind permission of Springer Science+Business Media from Ludwig Teleky L 1955 “Gewerbliche Vergiftungen” Springer) 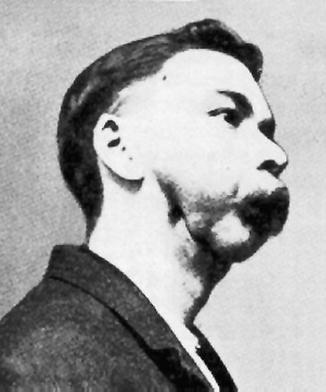 Fig. 19.4
Match factory worker at the end of 19th century suffering from phossy jaw with pathological fracture of the mandible and fistula formation (Reprinted from R.E. Marx “Introduction” in “Bisphosphonates and Osteonecrosis of the Jaw” by Francesco Saverio de Ponte with kind permission of Springer Science+Business Media)

History of Prevention and Precaution of Phosphorous Necrosis

It soon became obvious that prevention and precaution was the key to reduce the number of necrosis cases. Due to the severity of these cases and the frequently fatal outcome of phosphorous necrosis in those days, politicians were forced to act. Rules for match makers and special medical and dental examinations were introduced. Employees, who worked in the dipping room for more than 28 days straight, had to be examined by an appointed dentist. Regular medical examinations every 3 months were mandatory. All cases of toothache or swelling of the jaw had to be examined and reported immediately. After tooth extractions, workers had to be excluded from match making till a final examination showed a complete restoration to health. Owing to these measures, Goadby was able to report in 1909 during an annual meeting in England that between 1900 and 1907, only 13 cases of osteonecrosis out of a total of 1,378 workers (0.9 %) had been observed, as opposed to 73 cases that had been reported out of a total of 1,908 workers (3.8 %) before [13
Only gold members can continue reading. Log In or Register to continue