Histopathology of Medication-Related Osteonecrosis of the Jaw

Microscopic presentation of BRONJ is characterized by necrotic bony trabeculae demonstrating empty osteocyte lacunae. The necrotic bone is usually surrounded by bacterial colonies and shows irregular peripheral resorption and prominent reversal lines [10] (Fig. 12.2). Actinomyces in contact with vital bone has been described as a consistent histologic finding [11–13], and it has been suggested that this microorganism could be responsible for the chronic, nonhealing inflammatory processes and the purulent discharge seen in BRONJ [11]. Osteoclasts containing numerous intracytoplasmic vacuoles are seen at the periphery and in the intertrabecular spaces of the bony trabeculae. Large and hypernucleated osteoclasts have been reported in patients who received long-term oral bisphosphonate treatment [10]. The empty Howship’s lacunae at the periphery of the bone are frequently seen. It has been suggested that this microscopic finding depicts that osteoclasts have undergone apoptosis after interalizing bisphosphonates [14]. The intertrabecular space is infiltrated by inflammatory cells including neutrophils, lymphocytes, and plasma cells [15–17]. Pseudoepitheliomatous hyperplasia of the overlying mucosa has also been observed in BRONJ [11]. 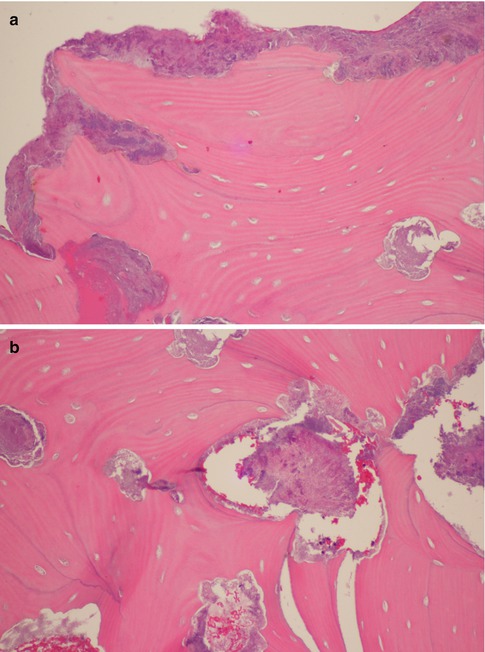 Fig. 12.2
Bisphosphonate-related osteonecrosis
Bisphosphonates have been found to inhibit endothelial function in vitro and in vivo and to reduce levels of vascular endothelial growth factor [18, 19]. In spite of these known antiangiogenic effects, data on the histologic changes of the vessels in BRONJ are scarce. In a rat model, a decreased rate of capillary formation could be observed [18]. In humans, obliteration of larger arterial vessels accompanied by an increased cellular proliferation of the intima and media and relative reduction of blood vessels in BRONJ has been reported [11, 20]. Others have found intact vasculature and no significant reduction of the capillaries on histologic examination [11, 21].
Few studies have investigated the histopathologic changes in the uninvolved bone of patients undergoing bisphosphonate therapy. Specimens from areas without bone exposure that are contiguous with areas of ONJ are characterized by hypervascular fibrous tissue and inflammatory infiltrate filling large intertrabecular spaces, an appearance similar to that of chronic osteomyelitis [22]. The newly formed bone present in non-necrotic areas is mostly composed of large masses of bone tissue showing centrifugal deposition and variable degrees of calcification (mature and recent woven bones), devoid of Haversian canals, and surrounded by prominent collagen deposition apparently entering the bone at right angles. Islands of woven bone contained plump osteoblasts, while osteoclastic activity is absent in such areas [23].

Osteomyelitis is an inflammatory condition of the bone, which generally begins as an infection of the marrow cavity, rapidly involves the Haversian canals, and eventually extends to the periosteum [9]. Histopathologic features of BRONJ and osteomyelitis may not be distinguishable, with both lesions showing non-vital bone with empty osteocyte lacunae. One difference is that the detachment of osteoclasts from the bone surface is seen in BRONJ, whereas in osteomyelitis, the osteoclasts are attached to the bone [16]. BRONJ cases have been shown to present with a mosaic pattern with a multiple compartment configuration, which is absent in osteomyelitis [24]. Osteomyelitis consistently shows viable inflammatory cells in the marrow spaces (Fig. 12.3). By contrast, BRONJ shows empty marrow spaces devoid of all cellular elements and normal cellular products [14]. 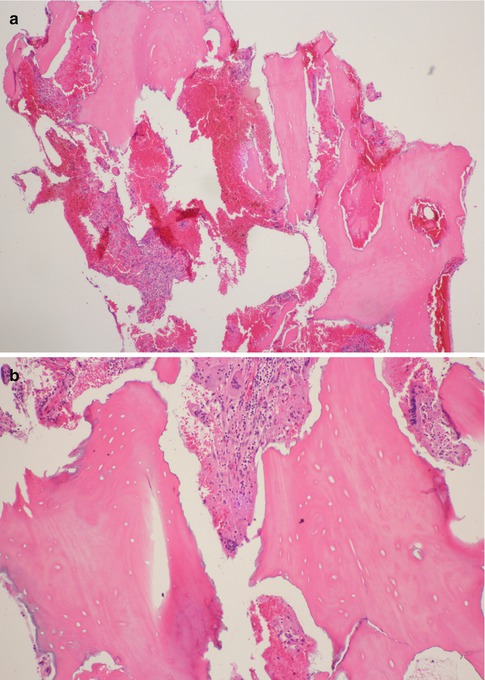 Osteoradionecrosis (ORN) is one of the most serious complications in the treatment of head and neck malignancies and is defined as the ischemic necrosis of the irradiated bone, which becomes hypovascular, hypocellular, and hypoxic [25, 26]. The histopathologic jaw findings in BRONJ are similar to ORN [4, 5, 27]. Microscopic presentation of ORN shows necrotic bone without osteoblastic and osteoclastic activities (Fig. 12.4). The bone marrow spaces are replaced with fibrosis. Inflammatory cell infiltration is limited [27]. The ghosts of old blood vessels are also seen [14]. The presence of Actinomyces has been described in both BRONJ and ORN [11]. It has been described that the areas of osteonecrosis seem to be patchier in tissue specimens of bisphosphonate-treated patients when compared with larger necrotic bone areas in ORN [11]. ORN demonstrates a nonviable periosteum and no evidence of reactive bone, whereas BRONJ may show viable periosteum and even reactive bone in many cases [14]. 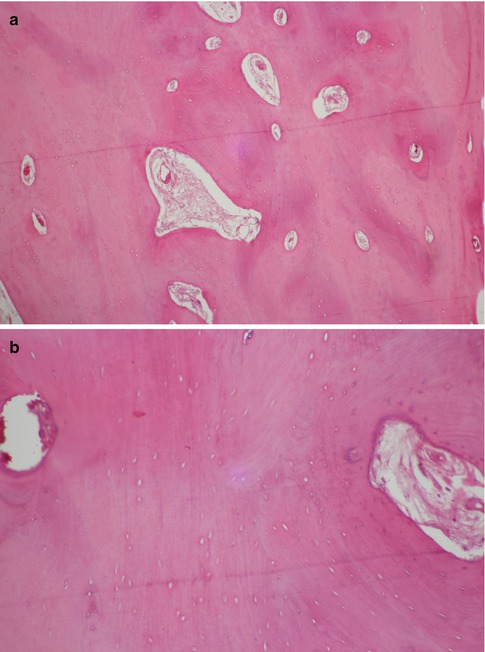 Medication-Related Osteonecrosis of the Jaws

Recently, cases of osteonecrosis of the jaws (ONJ) associated with the use of a non-bisphosphonate antiresorptive agent (denosumab) have been reported [28–30]. Other antiresorptive agents, including cathepsin K inhibitors, also could prove to be associated with ONJ. In fact, it has been recently proposed that all cases of ONJ related to the administration of antiresorptive therapeutic agents be termed “medication-related ONJ” (MRONJ). This term would encompass cases associated with bisphosphonates, as well as cases associated with the use of other antiresorptive and antiangiogenic agents [31]. Information regarding the histopathological changes in ARONJ is lacking and comes mainly from case reports. Necrotic bone demonstrating a scalloped, “moth-eaten” appearance has been described. Adherent bacteria, including filamentous forms and focal acute inflammation, are also present [29, 32]. Similar to BRONJ, Actinomyces has also been found in other MRONJ cases [32, 33]. MRONJ cases due to denosumab intake may not be distinguishable from ONJ due to bisphosphonate intake in terms of histopathology since both conditions are potentially the same entity. Additionally, many cases treated with denosumab have had previous bisphosphonate administrations [34].

BRONJ/MRONJ has a distinctive histopathology, characterized by nonviable bony trabeculae with irregular border, surrounded by massive bacterial colonies. Even though the diagnosis of BRONJ/MRONJ is mainly based on the patient’s history of bisphosphonate or denosumab intake and the clinical presentations, histological confirmation may be required.
References
1.
McLeod NM, Brennan PA, Ruggiero SL. Bisphosphonate osteonecrosis of the jaw: a historical and contemporary review. Surgeon. 2012;10(1):36–42.PubMed
Only gold members can continue reading. Log In or Register to continue