TISSUE ALLOTRANSPLANTATION:
FROM A CLINICAL PERSPECTIVE

In 2008, the world’s first face and maxilla transplant was performed at Cleveland Clinic.1 In total, six osteomyocutaneous face transplants have been reported in the literature (Table 19.1).2–5 Because of encouraging results seen thus far, there has been a dramatic rise in interest in maxillofacial allotransplantation (MFA). The craniomaxillofacial surgeon should therefore become familiar with the emerging state of the art. This chapter reviews the evolution of Le Fort-based cadaveric studies pertaining to MFA, briefly describes all clinical reports to date, and introduces a refined technique for employing orthognathic principles and practice.

For MFA, osteomyocutaneous alloflaps contain many structural components necessary for functional and aesthetic reconstruction when autologous technique is suboptimal or wholly inadequate. To date, numerous articles have been published on cadaveric dissections for maxillofacial composite tissue allotransplantation (CTA) (Table 19.2).6–9 Early studies evaluated the utility of CTA versus autologous free-tissue transfer and its feasibility, focusing on autologous skin coverage boundaries, establishment of dissection parameters (sequence, timing, pertinent anatomy, and so forth), vascular pedicle length, definition, and preservation.10–12 Additional studies have evaluated the psychosocial aspects of facial appearance/identity transfer in face transplantation and its surrounding ethical considerations.13,14 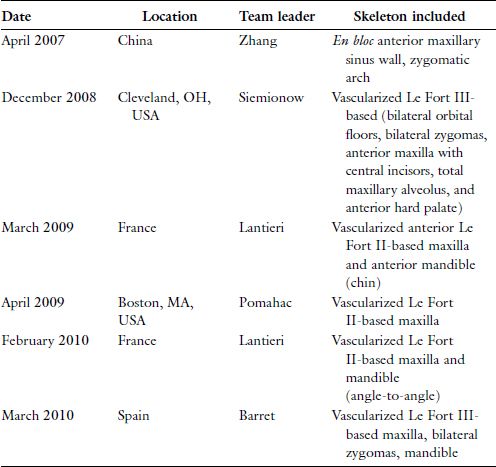 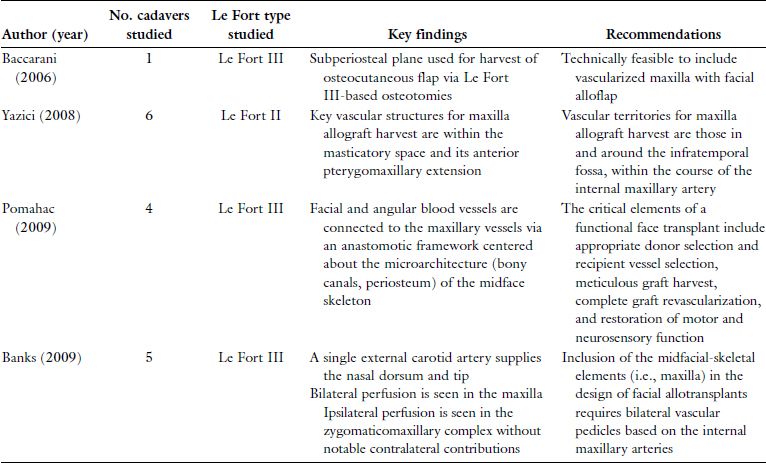 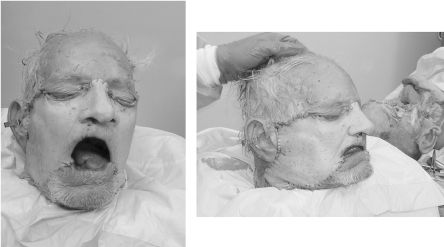 Many plastic surgeons are now realizing that for severe, bilateral orbito-zygomaticomaxillary defects, autologous reconstructive technique may be insufficient, and patients may be better served with allotransplantation.15 In this instance, the use of a Le Fort-based allo-flap may provide a realistic alternative in the properly selected patient with respect to (1) function — i.e., structural support of facial musculature for expression, neonasal cavity for olfactory function, and so on; (2) a neopalate and maxillary dentition for mastication; and (3) a skeletal framework for improving and predicting the facial-skeletal profile and overall harmony post-transplant (Figure 19.1).16

In 2006, an experimental study was performed at Cleveland Clinic using 10 cadaver heads in an attempt to define critical variables such as operating time for donor flap procurement and inset, nerve coaptation, and microvascular anastamoses, as well as critical thresholds for pedicle lengths. The authors reported that the minimum time necessary for mock cadaver transplant would be approximately 5.3 hours.11 However, the actual operative time for the maxilla-containing face transplant performed nearly 2 years later was 22 hours. The expected discrepancy related to the logistics of operating on cadaveric versus living tissue (e.g., neurovascular repair, maintaining hemostasis) and the inability to truly assess the recipient’s 3-dimensional skeletal defect (due to tremendous scarring and previous autologous reconstruction), but the discrepancy served to highlight the significant obstacles associated with MFA.17

Soon thereafter, a complementary study followed, involving a new generation of cadaveric dissection models. The controversial concepts of “facial appearance” and “identity transfer” as they related to soft-tissue facial CTA were discussed.13 The authors hypothesized that the recipient’s facial skeleton would be the primary determinant of alloflap draping, resulting in preferred maintenance of facial contour for soft-tissue face transplantation (i.e., identity). Eight soft-tissue alloflaps were placed alternatively on two recipient molds, and the study concluded that the post-transplant appearance was a “hybrid” containing features of both donor and recipient. This is an important consideration, as myocutaneous facial alloflaps rely on the recipient’s underlying skeleton as a final determinant with respect to final appearance, while Le Fort-based alloflaps are supported by the donor’s midfacial skeleton and its retaining ligaments, thereby remaining consistent with the donor’s soft-tissue appearance and skeletal relation. With proper orthognathic evaluation, the craniomaxillofacial surgeon can therefore more likely predict the post-transplant occlusion, orthognathic profile, and facial-skeletal harmony following osteomyocutaneous face transplantation.16

In November 2006, Baccarani et al. described two new cadaver techniques, one for soft tissue and one for hard tissue.6 In the first scenario, the myocutaneous alloflap was raised via subgaleal, sub-superficial musculoaponeurotic system and subplatysmal dissection. In the second, a subperiosteal plane was used, allowing for harvest of an osteomyocutaneous alloflap utilizing Le Fort III-based osteotomies. This study was the first to show that the donor maxilla could be included with the facial alloflap, allowing for concomitant osseous/soft tissue reconstruction. A similar approach was subsequently used in the midface allotransplant performed in Cleveland, Ohio, in December 2008.1

Baccarani et al. then addressed the critical issue of donor-recipient matching, with emphasis on certain facial features.18 Using four facial soft-tissue alloflaps and four facial skeletons, the authors demonstrated that gender, head/facial skeletal size, soft-tissue features, and skin color and texture were critical factors in preserving facial morphology post-transplant. However, a lack of available donors and institutional resources has limited the consideration of all such parameters. To address this issue, Gordon et al. proposed the use of a preliminary screening tool (i.e., FACES score19) and the establishment of registries to maximize the yield of relatively limited resources.

In 2008, Yazici et al. reported the first Le Fort II-based osteocutaneous face transplant model.7 Using magnetic resonance imaging and angiographic techniques, these authors defined the vascular territories in and around the infratemporal fossa and mapped the course of the internal maxillary artery. More recent studies by others have evaluated the vascular territories pertinent to a Le Fort-based, osteocutaneous alloflap design,8,9 both determining that bilateral vascular pedicles were in fact necessary for facial alloflaps with maxillary osseous components.

The first published report of face transplantation containing facial skeletal components was that performed by Guo and colleagues in April 2006.20 These surgeons reconstructed an extensive midfacial defect in a 30-year-old man who was mauled by a bear. They used a facial alloflap procured from a 25-year-old male donor. The time between injury and transplantation was 18 months. The alloflap included the right anterior maxillary sinus wall and lateral orbital rim with associated skin and soft tissue, upper lip, nose (cartilage and soft tissue), right parotid gland, and partial masseter with intraoral mucosa. Per the authors’ description, the underlying bone was harvested en bloc rather than with Le Fort-type osteotomies. Its pedicle design included bilateral facial arteries, anterior facial veins, and bilateral facial nerves.

The preliminary operation was a technical success. The recipient subsequently required scar revisions, excision of redundant soft tissue, oral commissure reconstruction, and autologous cartilage grafting/floor reconstruction of the right orbit. Of note, our recent experience in the cadaver lab has revealed the maintenance of orbital volume to be a critical element in Le Fort III-based allotransplantation due to its relation to (1) skeletal projection, (2) maxillary occlusive plane, and (3) inset.21

Poor right-sided facial nerve function was also noted by the team, with significant right eyelid lagophthalmos and poor levator labii superioris/levator anguli oris function, resulting in suboptimal smiling. There was normal skin and mucosal sensation by 5 months post-transplant. However, the patient died at 24 months post-transplant, and the cause of his death is unclear from the available literature.

Functionally, this patient has done relatively well. Quantitative neurosensory testing at 3 months showed reinnervation of the transplanted skin, with normal two-point discrimination at 1 year. Facial mimetics were noted to improve at 6 months, with a symmetric smile and steady improvement in upper lip/lower eyelid function. The patient experienced significant improvement in speech, nasal breathing, olfaction, and taste. Mastication and swallowing also improved, and soft foods and liquids were tolerated at 6 months.22 However, she has maintained a significant Class II skeletal profile, with mandibular retrognathism and excessive overjet (Figure 19.2). This most likely occurred due to the donor’s long maxilla and mismatched size in comparison with the patient’s native skeleton, but certain orthognathic-based refinements as presented here may help to improve outcomes in the future, shorten operative times, reduce blood loss, and may in return reduce hospital-acquired infections.21,23,31 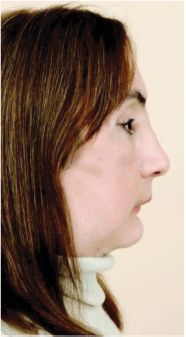