Direct Invasion of the Parotid by Head and Neck Cancer

Ranking second after basal cell carcinoma, squamous cell carcinoma is one of the most frequent malignant diseases of the skin. In central Europe, the incidence is thought to be about 20–30 newly diagnosed patients per 100 000 inhabitants per year, and the number is constantly increasing.

Long-term evaluations have reported a locoregional metastatic rate of up to 5% in cases of squamous cell carcinoma of the head, while carcinoma of the auricle has a higher metastatic rate of up to 10%. These rates mainly apply to immunocompetent patients with previously untreated carcinomas generally measuring less than 2 cm (T1) at the time of first diagnosis. This relatively low incidence of locoregional metastases is in contrast to a significantly higher metastatic rate with high-risk carcinoma. The incidence of metastases in this smaller group of patients suffering from cutaneous carcinoma is clearly underestimated.

All patients with unclear parotid tumors, especially patients with a risk of developing skin cancer, should undergo a careful examination of the scalp.

Parotid lymph nodes are at risk for metastatic involvement from cutaneous head and neck cancer. 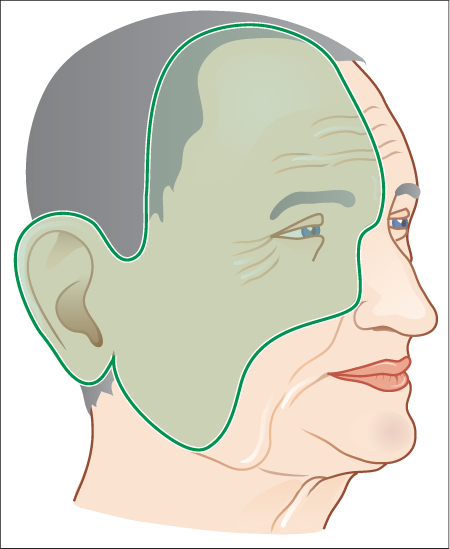 Fig. 36.1 The lymph nodes of the parotid gland collect lymph from the cutaneous area of the ipsilateral upper and lower eyelids, frontal and temporal regions, posterior cheek, and anterior ear. This is a high-risk region for squamous cell carcinoma metastasizing to the parotid gland lymph nodes. 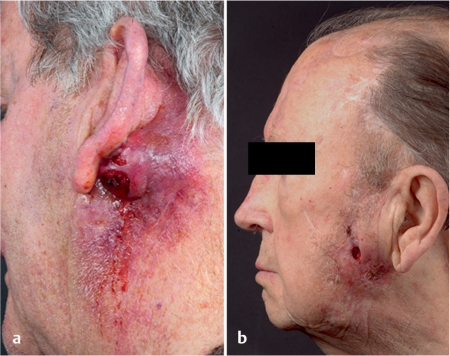 Parotid metastases from a squamous cell carcinoma of the skin are very aggressive and rapidly infiltrating tumors, which quite often have extraparotid dissemination at the time of first diagnosis (Fig. 36.2). After direct infiltration of the glandular parenchyma, they may spread into the parapharyngeal space or grow alongside the facial nerve in the direction of the skull base. Infiltration of the subcutaneous fatty tissue and of the skin of the parotid region frequently occurs. In comparison with primary squamous cell carcinomas of the parotid gland, these metastases have clearly more aggressive behavior, with poorer tumor control and survival rates for the patients.

In an evaluation of 73 patients suffering from parotid metastases from cutaneous squamous cell carcinoma, clinically positive cervical lymph nodes were identified in 26% of cases (19 of 73), whereas patients with clinically negative necks who underwent elective neck dissection (37 of 54) were found to have occult neck metastases in 13 cases (35%).1 In another study, occult cervical lymph-node metastases were detected in 42% of patients with parotid metastatic spread.2 Along with other findings in the literature, these data show that cervical metastatic spread can therefore be expected in more than 50% of patients who present with parotid metastases.

Parotid metastases occur in the close vicinity of the cervical lymph nodes and are often accompanied by cervical lymph-node metastases, in the same way as primary high-grade carcinoma of the parotid gland.

In addition to the tumor locations in the facial region mentioned above, there are also additional factors that represent a risk for lymphogenic metastasis from cutaneous carcinoma.

A significantly higher metastatic risk is observed for carcinomas measuring more than 2 cm. There is thought to be a nearly threefold higher risk for metastasis in comparison with smaller carcinomas. In other investigations, cutaneous carcinomas with a minimum diameter of 1.5 cm were analyzed that showed increased locoregional metastatic spread. In contrast, in a smaller number of evaluations, no correlation between tumor size and metastatic rate was found.

A tumor infiltration depth of more than 4 mm is also considered to be a risk factor for lymphogenic metastasis. A significantly increased metastatic rate was observed in patients with tumors deeper than 2–6 mm and more than 6 mm, while tumor depths of less than 2 mm were not associated with metastatic spread.

Mention should also be made of the role of perineural invasion by cutaneous carcinoma, which is often associated with a significantly increased metastatic rate. In some investigations on patients with parotid metastases, about half of the patients had a history of multiple carcinomas of the scalp. Multiple skin carcinomas have also been discussed as a further possible risk factor for the development of parotid metastases.3

Adequate pathological assessment of the resection margins of the primary cutaneous carcinoma is very important clinically. Resection without healthy margins, or resection of the carcinoma with only a narrow margin of normal tissue, are associated with a high risk for the development of local recurrences, which have much more aggressive growth behavior and represent a high risk for the development of locoregional metastases. A safety margin of less than 2 mm is considered insufficient, and only dermohistopathological confirmation of healthy tumor resection margins can be regarded as safe.

Patients receiving immunosuppressive treatment and those who have undergone organ transplantation have a high rate of metastasis, as do patients with squamous cell carcinoma of the skin, especially those with chronic lymphatic leukemia and renal insufficiency.4

Finally, the patient’s age also plays a role in relation to the rate of lymphogenic metastasis. In most studies on cutaneous carcinoma and locoregional metastasis in the area of the parotid gland, the patients have been aged 70 or over, so that age can also be regarded as a risk factor in this context (Table 36.1).

None of the clinical and pathological factors mentioned above can be regarded in isolation as an independent and predictive tumor characteristic. A combination of different tumor characteristics needs to be taken into account on an individualized basis when identifying high-risk patients.

Metastases in the area of the parotid lymph nodes and the cervical lymph nodes, which are in close contact with them, have a high prognostic significance in patients suffering from squamous cell carcinoma of the skin. According to the literature, the 5-year survival rate in patients with locoregional metastatic cutaneous squamous cell carcinomas is about 50%. However, these patients are considered to be primarily curable, with a high risk of up to 20%–25% for the development of local recurrences despite aggressive multimodal therapy.5 Local recurrences are generally incurable and are associated with a high risk of distant metastasis, especially in the area of the lung (Fig. 36.3). 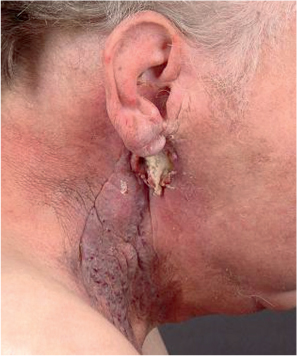 Fig. 36.3 An ulcerous local recurrence in the parotid area after parotidectomy, neck dissection, and adjuvant radiotherapy in a patient with a parotid metastasis from a squamous cell carcinoma of the scalp.

Tumor size is the only criterion for the currently valid T classification of cutaneous carcinomas without infiltration of the cartilage, muscles, or bones. The new staging system proposed by Dinehart and Peterson8 for cutaneous squamous cell carcinoma takes the relevant risk factors discussed above into account, but it still requires further evaluation.

Owing to the heterogeneity and different biological behavior of cutaneous squamous cell carcinomas, adequate prognostic assessment taking the above prognostic factors into account is possible with the current TNM classification only for Merkel cell carcinoma (International Union Against Cancer/UICC 2010).