There is a vast array of choices available to the otolaryngologist to treat simple snoring. The majority of these procedures function via the principle of palatal stiffening in which the vibrating floppy soft palate of the snoring patient is stiffened by creating scar tissue in or on the palate. Injection snoreplasty (IS) was originally developed as a modification of a solitary, indistinct case series published in the 1940s in which fish oil was injected into the pharynx of three patients to ‘alter the “flutter ratio” of these tissues as to reduce or eliminate snoring.’1 IS serves well as an alternative to the currently available snoring treatments that are either painful and/or expensive.2 IS is highly effective in the majority of patients, is easily performed in the office with inexpensive materials, and typically results in mild pain only that does not prevent the patient from returning to the majority of their daily activities.

IS is most effective in patients who suffer from socially bothersome palatal flutter snoring. IS has not been found to be effective in managing obstructive sleep apnea syndrome (OSAS) (author’s unpublished data) and therefore, it is strongly recommended that OSAS be objectively excluded prior to snoring treatment. This is best accomplished with polysomnography as the history and physical exam are limited in their accuracy in diagnosing and excluding OSAS.3

IS (and most currently available snoring treatments) targets only the soft palate for snoring treatment. Fortunately, it appears the majority (estimated to be approximately 85%) of snoring patients suffer from palatal flutter snoring.4 Ascertaining that the patient does indeed suffer from palatal flutter snoring, as opposed to other sites of snoring noise production, can translate to increased success with IS and other palatal snoring procedures.5 Commercially available ‘take-home’ polysomnographic technology does exist that appears to reliably identify palatal flutter snoring that translates into improved treatment success rates. However, one must be careful in relying on objective snoring analysis to the point where the ultimate goal of improving the patient’s subjective, social problem of snoring is overlooked.

As with any palatal procedure, patients should be screened carefully for any systemic conditions which may adversely affect wound healing. Examples include vascular disease, poorly controlled diabetes, and chronic steroid use. Addition-ally, patients with a strong gag reflex that is not abated with topical anesthesia may be very difficult to treat with IS or any office-based snoring procedure. Lastly, any pre-existing allergies to the injected agents should be excluded.

3 DESCRIPTION OF THE PROCEDURE

IS can be easily accomplished in a typical 20-minute office visit.2 Informed consent is first obtained in all cases. Topical anesthesia is obtained with a thorough application of benzocaine spray or gel. This will also help the majority of patients with a problematic gag reflex. Local injected anesthesia (1% or 2% lidocaine without epinephrine) can be used to further anesthetize the soft palate, but is not necessary as the procedure can be quickly accomplished with a brief, mildly uncomfortable single injection that would be analogous to a local anesthetic injection.

IS has been successfully performed with three different sclerosing agents. The authors have reported the safe and effective use of two different agents in large numbers of patients. Three percent sodium tetradecyl sulfate (STS) (30 mg/ml SotradecolTM, Bioniche Pharma, Lake Forest, Illinois, USA, www.sotradecolusa.com/) was used in the original developmental animal model and in the initial IS human use studies.6 Three percent STS has been used for over five decades for varicose vein therapy and has an excellent safety record. It is inexpensive (less than $30 per treatment at the time of writing), easily obtained, and requires no dilution or mixing. It is highly effective and is the agent of choice for us. It is important to note that STS has NOT been FDA approved for palatal sclerotherapy and its use as such entails ‘off label’ use. It is unlikely that an FDA approval trial will ever be performed due to the fact that STS is no longer under patent protection.

IS has also been extensively performed by the authors with a 50–50 combination of 2% lidocaine (no epinephrine) and 98% dehydrated ethanol (sterile for injection). The safety and efficacy of dehydrated alcohol were demonstrated in an animal and human use study.7 Ethanol was chosen as an alternative to STS given its equally excellent long-term safety record, its widespread availability, and its low cost (less than $20 per at the time of writing). There does not appear to be any significant difference in the effectiveness and discomfort level in STS and ethanol.7 Again it is noted that ethanol is also not FDA approved for palatal sclerotherapy and will likely never undergo an approval trial for the same reasons as STS.

IS has also been successfully performed by published report using a lesser known sclerosing agent called Aethoxysklerol (AES).8 The authors have not used this agent and refer the interested reader to the original article for more information.

After topical anesthesia is obtained and the sclerosing agent is selected, the procedure is simply accomplished with a single midline soft palate injection. Typically a 2 ml syringe and a 27-gauge inch and a half needle are used and 1.5–2.0 ml of sclerosing agent is injected. The location of the injection is important to the success of the procedure and in minimizing patient discomfort (Fig. 27.1). The injection is best placed in the midline soft palate approximately 1cm proximal to the edge of the soft palate near the hard palate junction. It should NOT be placed into the uvula as this will produce significant uvular swelling that is often distressing to the patient. The injection is placed submucosally and NOT deep to the palatal muscle. The goal of the injection is to create a superficial sloughing of the soft palate mucosa that will be replaced by scar tissue, thereby stiffening the palate and reducing the patient’s snoring. 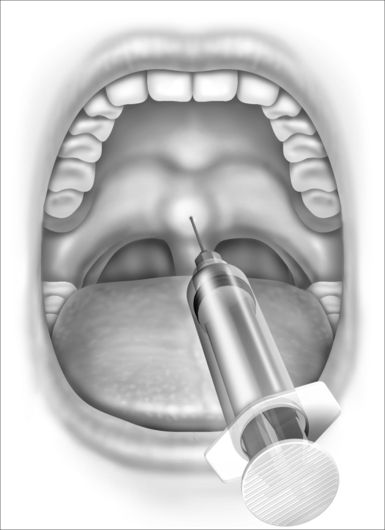 Fig. 27.1 The injection snoreplasty procedure. Approximately 1.5 ml of the selected sclerotherapy agent is injected submucosally into the central soft palate with a 27-gauge needle creating an easily visible bulla. Care is taken not to allow the injected agent to spread into the uvula to avoid bothersome uvular swelling.