Traumatic dental injuries (TDIs) are caused by sudden impact forces to teeth generated by falls, fights, sports-related injuries, and traffic accidents. School children have a 25 % risk of suffering TDIs and 33 % of all adults will suffer TDIs [1]. The most common TDIs in adult teeth are crown fractures [2], while children are most likely to suffer a protrusion or retrusion of a tooth causing lateral luxation [3]. All TDIs, even if apparently mild, require a dental exam. Sometimes, the neighboring teeth can suffer an additional, unnoticed injury that can only be detected by a thorough dental exam.

When the patient or their parent/guardian telephones and describes tooth trauma, arrange to see the patient immediately. Check that the trauma is limited to the teeth; if the injuries to the face are more extensive, the patient must be directed to visit an accident and emergency center for treatment prior to seeking dental treatment. If the patient has an avulsed tooth, tell them to wash it and replant it quickly. When the patient arrives at your office following an accident, you should wash blood and dirt from their face with soapy water. Tell the patient to rinse their mouth with mouthwash or saline.

Subjective information should be gathered by talking with the patient about their injury. The types of questions to ask patients are:
1.
How do you feel? Did you become unconscious or confused?—Judge if the patient appears confused and needs medical assistance, or if their condition is stable and they are healthy enough for dental trauma care.
2.
How long ago did the injury occur?—Knowing the amount of elapsed time is important for replanting teeth and treatment planning.
3.
How did you get injured?—Crashing in a car or bicycle will likely cause greater injury forces than those associated with a fall onto the pavement or being punched to the mouth.
4.
Have you taken any pain killers for the pain?—Assess if the trauma symptoms are being masked by pain killers.
5.
Have you had any previous difficulty to control pain with local anesthesia? With taken any pain killers for the pain?—This will help determine if a longer waiting time or supplemental anesthesia is needed before you can start treatment.

Objective information should be gathered about the patient’s condition from the following criteria:
1.
Palpation tenderness and swelling.
2.
Examination of the injured tooth.
3.
Radiographs taken from different angulations or a cone beam computed tomography image of the root canal of an injured tooth.
4.
Cold, hot, electric, and percussion sensibility test results.
5.
Asking the patient to point to the painful tooth, if it is not obviously injured.
6.
Identification of trauma type.
7.
Dental and medical history.
8.
Soft tissue lesions should be palpated to identify any tooth fragments or foreign bodies. If the lip is lacerated, a radiograph of the lip is needed to identify any tooth fragments or foreign bodies.

The assessment of objective information should be used to reach a differential diagnosis of the type of dental trauma. The assessment should include the following criteria:
1.
Avulsion of the tooth from its socket
2.
Displacement and loosening of the tooth
3.
Mobility of a single tooth or several teeth as a unit
4.
Intrusion, protrusion, and retrusion of the tooth
5.
Tenderness to percussion
6.
Signs of root and crown fracture

The differential diagnosis of dental trauma and assessment criteria are used for treatment planning:
1.
Regenerative endodontic treatment for teeth with immature roots, which have symptoms of a traumatized irreversibly injured pulp.
2.
Antibiotics can protect the patient from infection following TDIs. There is none or limited evidence that antibiotics are beneficial for saving teeth or for healing TDIs.
3.
Discarding teeth which should not be replanted, replanting avulsed teeth, and repositioning loose and luxated teeth back into their sockets using splinting to neighboring teeth. Splinting should reposition a loose tooth in its correct position and be comfortable.
4.
Apexification treatment for teeth with mature roots which have symptoms of a traumatized irreversibly injured pulp.
5.
Root amputation, hemisection, bicuspidization.
6.
Surgical intervention needed to restore facial appearance and function.

Root or crown fractures should not condemn the tooth so that it should automatically be considered for extraction. Root fractures can be vertical or horizontal and can occur at any level. Many teeth with root fractures can be saved by endodontic treatment and restoration of the crown. The type of and amount of treatment needed to save the injured tooth are dependent on the type and severity of TDI. If the extent of the fracture is linear from the crown to the root, replanting the tooth is not recommended because of the high risk of treatment failure caused by infection through the fracture.

Several angulated radiographs are needed to identify root fractures, particularly in the mesiodistal plane, and incomplete or oblique fractures. These fractures are the most difficult to identify. Radiographs should be carefully examined for the following information if a fracture is suspected:
1.
Degree of fragment separation
2.
Apex and root development
3.
Root resorption, fracture lines, and presence and location of radiolucencies
4.
Evaluation of periodontal tissues

The dental examination should identify the movement of a tooth following TDI, such as coronal displacement, tooth discoloration, and mobility. It may include the following criteria:
1.
Soft tissue evaluation
2.
Periodontal probing
3.
Occlusal evaluation
4.
Responsive testing
5.
Exploration by lifting a surgical flap

The patients’ description of their TDI will help diagnose the type and severity of the injury. It may include the following criteria:
1.
Swelling and treatment history
2.
Pain history
3.
Injury description
4.
Time elapsed since injury

Identification of the Type of Traumatic Dental Injury 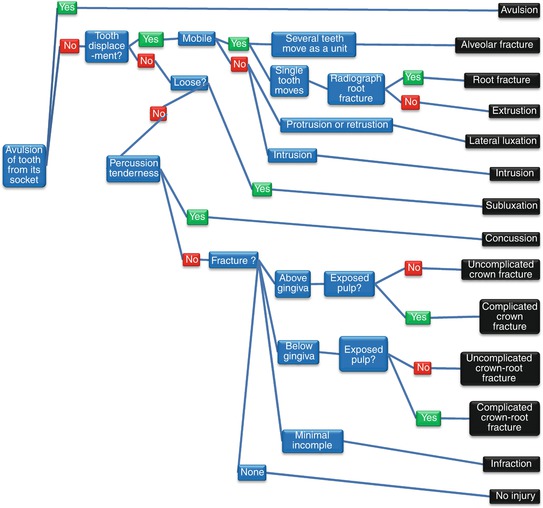 The priority of emergency care is to relieve pain and provide evidence-based treatment to save the tooth. This involves giving anesthetics, suturing soft tissue lacerations, and the repositioning and stabilizing of bone and the involved teeth. If pain and mobility are not present, a definitive diagnosis and treatment plan should be delayed until healing has had a chance to occur. The immediate lack of pulp sensibility response should not indicate that the pulp is necrotic and root canal treatment is needed, since the test may be unreliable owing to the temporary neural paresthesia. The patient should be recalled immediately if they experience pain or after 3 months have elapsed and be evaluated for the following criteria:
1.
Change in tooth color.
2.
History of pain and swelling.
3.
A radiographic evaluation should also be performed.
4.
Mobility beyond normal limits.
5.
Pulp sensibility response.
6.
Soft tissue changes.

The steps to diagnose and deliver treatment for dental trauma are:
1.
Clean and inspect all aspects of the TDI.
2.
The SOAP, PERCACIDS, ADMITS, DARE, SPORE, and SPIT criteria are used to differentially diagnose the type and severity of TDI.
3.
Give local anesthesia to relieve pain at the site of the TDI and make the patient comfortable.
4.
Use the flowchart in Fig. 2.1 and Table 2.1 to determine the type of TDI.
5.
Use RADARS criteria to plan the treatment.
6.
Use CHAMPS criteria to monitor the healing and success of the treatment.

The treatment decision-making steps for dental traumatic injuries using the criteria are:
1.
Decide to give immediate treatment with appropriate pain relief or delay treatment and monitor the tooth until a treatment is indicated and necessary. Check the pulp sensibility; if the pulp sensibility response is altered to cold and electric pulp testing, or the tooth is painful, suggesting a necrotic pulp or a pulp with irreversible pulpitis, then root canal treatment is indicated.
2.
Reimplant avulsed teeth if they will be able to heal or discard the tooth.
3.
Examine all lacerations and abrasions, to ensure that all tooth fragments, dirt, and foreign material have been removed.
4.
Suture any lacerations after checking the wound is clean and disinfected with saline or chlorhexidine.
5.
Splint loose teeth with resin to immobilize them in their correct position to neighboring teeth for 2 or 4 weeks.

Avulsion injuries are considered one of the most complicated and detrimental displacement injuries of teeth. The maxillary central incisors are the most frequently avulsed teeth. Avulsion frequently involves a single tooth; but multiple avulsions are occasionally encountered. The most common age group for avulsion injuries is children between the age of 7 and 10 years, when the permanent incisors are erupting. The loose structure of the periodontal ligament favors complete detachment and avulsion of the tooth as opposed to a crown or root fracture. Damage to both the pulpal and periodontal tissues is a common sequel of tooth avulsion injuries. Immediate replantation of a permanent avulsed tooth is the most critical of all factors that impact the prognosis of that tooth. Failure to properly handle, transport, and store the avulsed tooth in addition to delaying its replantation may lead to permanent irreversible destruction of both the pulpal and periodontal tissues and inevitably reduce the success of any replantation attempts.
The replantation of avulsed permanent teeth has been the subject of several in vivo research studies using animals. Normal healing is characterized by complete repair of the periodontal ligament (PDL) and is radiographically characterized by no signs of resorption. In a clinical study of 110 replanted teeth, 90 % of teeth replanted in less than 30 min showed no resorption [10]. The replantation of avulsed teeth can be a very successful therapy over the long term; however, many replanted teeth fail. Replacement resorption is the most detrimental of the periodontal ligament responses that occur following replantation of an avulsed tooth with long extra-alveolar time [14].
Avulsed baby teeth should not be replanted. The following are considerations for replanting avulsed permanent teeth:
1.
Replant the avulsed teeth as quickly as possible, preferably within 30 min. The longer the teeth are outside the oral cavity, the less favorable is the prognosis.
2.
Alveolar fractures can complicate healing. Avulsed teeth with an extensive root and crown fracture should not be replanted.
3.
Intact periodontium is essential for replant success.
4.
Necrosis of the pulp is likely because of the interruption in blood flow. A fully mature tooth will need a root canal treatment no later than 2 weeks following its replantation. An immature tooth with an apex open more than 1.1 mm will need a regeneration treatment if the root canal walls are thin and will be prone to fracture. An immature tooth with thick walls will need an apexification treatment. These treatments are discussed in the next chapter.
5.
Y
Only gold members can continue reading. Log In or Register to continue