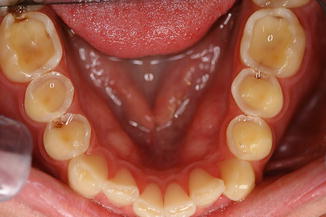 Fig. 1.2
Advanced stage of dental erosion
Dental erosion may be caused by extrinsic and intrinsic factors. Probably the most investigated extrinsic cause of dental erosion is excessive consumption of acidic beverages [3, 4]. The consumption of acidic beverages has risen during the last decades. In the United States, a 300 % increase in soft drink consumption has been reported between 1980 and 2000 [5]. Recently, Mexico surpassed the United States as the biggest consumer of soft drinks in the world: 136 L/year in Mexico versus 118 L/year in the United States. Next to problems such as obesity and diabetes, this overconsumption of high glucose and acidic drinks can cause an increase in caries and dental erosion prevalence.
The intrinsic cause of dental erosion is contact of teeth with gastric acid during vomiting or reflux. Vomiting and reflux are rather frequently observed in conditions such as anorexia nervosa, bulimia, gastrointestinal disorders, alcoholism and pregnancy [6]. A typical clinical sign pointing towards erosion caused by gastric juice is palatal dental erosion (Fig. 1.3). Based on only a few reports, it appears that gastric acids are equally likely to induce moderate to severe erosion as dietary acids [7]. Based on the increase in soft drink consumption and the frequently observed reflux symptoms a rise in the incidence of dental erosion can be expected. 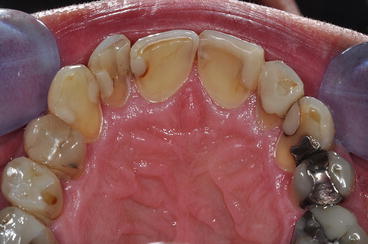 Fig. 1.3
Palatal dental erosion related to gastric reflux
The aetiology and predisposing factors of dental erosion are discussed in more detail in Chaps.​ 3 and 4.

Numerous epidemiological studies have investigated the prevalence of dental erosion. For these studies different cross sections of the population are investigated. A problem with comparing these studies is that different methods and indices are used to score the prevalence. Since the last decades, multiple indices have been developed for diagnosing, grading and monitoring dental hard tissue loss [8]. These indices have been designed to identify increasing severity and are usually numerical. Some record lesions irrespective of aetiology (tooth wear indices), others record wear on an aetiological basis (e.g. erosion indices). A widely used tooth wear index is the Smith and Knight Tooth Wear Index (TWI) [6]. The most recently developed index is the Basic Erosive Wear Examination (BEWE) index. With this index the dentition is divided in sextants; and the buccal, occlusal and lingual surfaces of every tooth in each sextant is examined for tooth wear and awarded a score value between 0 and 3. ‘0’ means no erosive wear, ‘1’ is initial loss of surface texture, ‘2’ is a distinct defect with hard tissue loss <50 % of the surface area and ‘3’ is hard tissue loss >50 % of the total surface area. For each sextant, the highest score is recorded, and when all the sextants have been assessed, the sum of the scores is calculated [9].
The assessment of dental erosion is discussed in more detail in Chap.​ 6.

1.3 Prevalence and Incidence of Erosion

Erosion prevalence studies have been performed in developed and developing countries, and large differences were found between countries, geographic locations and age groups. Most epidemiological studies are performed in Europe and much less information is available for the United States and Asia. Overall it is found that erosive wear is a common condition. Multiple studies show that primary and permanent teeth can both be affected.

A review of numerous studies on the prevalence of dental erosion found large differences per age group [10]. In the younger age groups (2–9 years) prevalence is between 6 and 50 %. The highest prevalence (11–100 %) was found in children between 9 and 17 years old. Studies with adults aged 18–88 years showed prevalence between 4 and 83 % [10]. Data on the risk for certain age groups to develop erosion (incidence) is less widely available in contrast with prevalence data. There is some evidence that the prevalence of erosion is growing steadily, especially in the older age group [11].

In this section the findings of a selection of prevalence and incidence studies are discussed by geographic regions.

Dental erosion is generally thought of as a modern phenomenon, but recent archaeological investigation showed that the condition, to some degree, has always been present in the population. Skeletal material from a mediaeval farm population in Iceland was used to study the degree of wear using the Smith and Knight Tooth Wear Index. It was found that in this group dentin was exposed on 1464 surfaces (31 %) and the appearance was characteristic of both chemical and physical wear [12].
Probably the largest reservoir of data on prevalence and incidence of erosion and tooth wear is available in the United Kingdom. Many regional and nationwide studies have been performed. One cross-sectional study using the UK children’s dental health survey and the dental report of the National Diet and Nutrition Surveys (NDNS) reported that dental erosion increases between different age cohorts of young people over time between 1993 and 1997. The data from the NDNS was compared to the children’s dental health survey conducted 3 years earlier and it was found that the prevalence of erosion in both primary and permanent incisors was increased. For example, amongst 4–6-year-olds, an increase from 18 % in 1993 to 38 % in 1996 of labial surfaces of primary incisors affected by erosion was found. In general, the increase in prevalence is the case for incisors as well as molar teeth. Weak associations were found between erosive wear and diet, symptoms of gastro-oesophageal reflux and socio-demographic variables such as geographical region and socioeconomic status [13].
A study investigated the prevalence and incidence of erosive wear in the Netherlands, and found that 24 % of the 12-year-old children demonstrated erosive wear [14]. Another Dutch study showed even higher figures; in 2008 a prevalence of 32.2 % was found in subjects aged between 10 and 13 years. Even more striking was the observation in the latter study that 24 % of the children that were free of erosion at baseline developed erosion over the subsequent 1.5 years [11].
A Europe wide study investigating the prevalence of tooth wear including erosion was published in 2013. The BEWE score was used to assess the prevalence of tooth wear on buccal/facial and lingual/palatal tooth surfaces in a sample of young European adults, aged 18–35 years. The BEWE score was 0 for 1368 patients (42.9 %), 1 for 883 (27.7 %), 2 for 831 (26.1 %) and 3 for 105 (3.3 %). There were large differences between different countries with the highest levels of tooth wear observed in the United Kingdom. Associations were found between tooth wear and acid reflux, repeated vomiting, residence in rural areas, electric tooth brushing and snoring. As 29 % of this adult sample had signs of tooth wear, it was concluded that tooth wear is a common problem in Europe [15].

As in many developing countries the lifestyle of the Chinese people is changing significantly. Dental erosion has begun to receive more attention but data about the prevalence of dental erosion in China is still scarce. One study investigated the prevalence of dental erosion in 12–13-year-old children. At least one tooth surface with signs of erosion was found in 27.3 % of the children. The loss of enamel contour was present in 54.6 % of the tooth surfaces with erosion. Furthermore, an association was found with the consumption of carbonated drink once a week or more and also with social economic background [19].
Only gold members can continue reading. Log In or Register to continue