Identification of the living and the dead is of paramount importance in routine forensic practice. Age estimation is one of the prime factors employed to establish identity (Rai et al. 2007). In cases of unknown bodies, age estimation becomes necessary if there is no antemortem information available and a personal profile has to be reconstructed. Age estimation is of broader importance in forensic odontology, not only for identification purposes of deceased victims, but also in connection with crimes and accidents. In addition, age is used in most societies for school attendance, social benefits, employment, adoption, political asylum, and marriage (Willems 2001). Teeth are the strongest parts in the human body and are therefore very resistant to external influences, such as extreme temperatures, explosions, and other extreme conditions, which make them available for extensive postmortem periods. In addition, teeth are good indicators of people’s age. These two facts allow us to use human teeth for age estimation in forensic work. Furthermore, dental age estimation in the living is mostly based upon noninvasive methods, which evaluate the timing and sequence of defined growth stages of the developing dentition and the sequence or modification of traits in the mature dentition and the surrounding tissues. Therefore, recommendations for age estimation of living persons include a dental status and a panoramic radiograph, a general physical examination, and an X-ray examination of the hand (Schmeling et al. 2004).

Various methods are utilized to determine age from dentition. These may be described in four categories, namely, clinical, radiographic, histological, and physical and chemical analyses:
1.
Clinical or visual method: Visual observation of the stage of eruption of the teeth and evidence of changes due to function such as attrition can give an approximate estimate of age.
2.
Radiographic method: Radiography can provide the gross stage of dental development of the dentition.
3.
Histological method: Histological methods require the preparation of the tissues for detailed microscopic examination, which can determine the stage of development of the dentition more accurately. This technique is more appropriate for postmortem situations. It is also significant in estimation of age of early development of dentition.
4.
Physical and chemical analyses: The physical and chemical analyses of dental hard tissues to determine alterations in ion levels with age have been proposed. While these techniques are not yet of great value to the forensic odontologist, future developments might provide an adjunctive means of collecting evidence of value in the dental context.

The factors used to determine age using dentition are as follows:

Dental age can be estimated according to developmental traits such as mineralization, gingival emergence, the quantification of cementum layers or decreasing pulpal space, degenerative changes such as dental attrition or periodontal recession, the fluorescence intensity and density of dentin, the racemization of aspartic acid, or dentin sclerosis, among others.

Tooth formation is a composite process that begins with a gradual reorganization and a shift in the phenotype of embryonic cells. Deciduous teeth start to develop in the 6th to 8th gestational week; permanent teeth develop in about the 20th week of gestation (Ten Cate 1998). Data on the timing of human dental development are based on radiographic, histological, and morphological studies. It has been reported that histological criteria allow an individual’s age to be estimated from the 7th week of gestation up to 3 years of age (Calonius et al. 1970). Hillson (1996) reported that gestational age and the height of deciduous tooth germs were also found to be correlated. The tables of Schour and Massler (1941) have become a typical example of the commonly used atlas approach for children’s age estimation. Schour and Massler’s data represent 22 stages of dental development, starting from 5 months in utero until 35 years of age. Gleiser and Hunt (1955) described detailed stages of the calcification of the mandibular first molar based on radiographs in the first follow-up study design in this field. Moorrees et al. (1963) derived the age of attainment for 14 developmental stages, from “initial cusp formation” to “apical closure complete,” for the maxillary anterior teeth and all eight mandibular teeth. These tables were updated by Anderson for all teeth, including the wisdom teeth (Anderson et al. 1976). Another atlas approach involves the charts of Gustafson and Koch (1974), which are based on the beginning of mineralization, the completion of the crown, the eruption of the respective tooth, and the completion of the root(s). Demirjian et al. (1973; Demirjian 1976) defined four developmental crown and four developmental root stages, which were based on the appearance of the radiological visible tooth germ. In this approach, a scoring system was used for the formation of seven left mandibular teeth. Every stage was assigned a certain dental score. Adding up all scores gave the Dental Maturity Score. Third molars are the teeth with the highest variability concerning anatomy, agenesis, and age of eruption. Age estimation for medicolegal and criminal case purposes by means of third molar development is used for ages between 14 and 21 years when all other permanent teeth have finished their formation. Using Demirjian’s developmental stages for third molar mineralization analysis (Schmeling et al. 2004) has been recommended, while using modified Gleiser and Hunt stages for third molar mineralization analysis (Rai et al. 2010a, b; personal experience with the Indian legal system) can also be beneficial. Other groups have suggested that modified Demirjian stages have the advantage of being clearly defined with radiographs, diagrams, and written criteria. This was also confirmed by a direct comparison of five common classification systems on orthopantomograms of females aged12–25 years (Olze et al. 2005).

3.4.2 Rate of Formation of Incremental Structures in the Tooth Crown

Boyde (1963, 1989) observed that age could be estimated from prism cross-striation counts. Prisms are bundles of hydroxyapatite crystallites that form mature enamel. An additional dental feature visible in crown enamel is known as Retzius lines (Fig. 3.1), which run from the enamel–dentin junction (EDJ) in the occlusal direction. Retzius lines can be found in permanent teeth as well as in the deciduous dentition, but only in postnatal enamel (Pantke 1985). Thus, the neonatal line, which constitutes a borderline between pre- and postnatal formed enamel (and dentin), is frequently used to estimate age at death. Perikymata are small, visible lines on the enamel surface. Brown striae of Retzius and perikymata groove counts have been used to estimate the age at death (Dean and Beynon 1991). 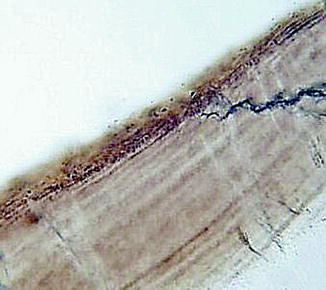 3.4.3 Changes in the Pulpodentinal Complex

The secondary dentin is built physiologically and is formed slowly by cells lining the pulp chamber. Secondary dentin formation is initiated subsequent to dentinogenesis (Costa 1986). The continuous formation of secondary dentin is due to the biological response to masticatory stress and fluctuation of temperature (Rösing and Kvaal 1998). It has been reported that the apposition of secondary dentin is correlated with chronological age (Bodecker 1925). The apposition of secondary dentin leads to a gradual reduction in the size of the pulp chamber and can affect the obliteration of the root canal (Kvaal et al. 1995; Zilberman and Smith 2001). Measurements quantify the amount of secondary dentin indirectly via the assessment of the decrease in size of the pulp cavity (Rösing and Kvaal 1998). Kvaal and Solhiem (1994) reported a method where the pulp width and length are calculated in relation to the tooth width and length. Reports with canine teeth have examined the pulp/tooth area ratio on orthopantomograms (Cameriere et al. 2004), periapical X-rays (Cameriere et al. 2007), and individual periapical X-ray (Rai et al. 2010a, b). Root dentin transparency was first introduced in 1950 for age estimation by Gustafson as one of his proposed six criteria. Bang and Ramm (1970) reported an association between age and the length of the dentin transparency and concluded that feasible results can be obtained for sectioned and unsectioned teeth specimens up to 75 years of age. Lamendin and colleagues observed an approach for age determination for single teeth that used periodontosis height and root transparency as parameters for age prediction (Lamendin et al. 1992). The quantification of age-related changes in cementum determined that the cementum’s layered appearance is due to structural differences in the mineral phase, an optical phenomenon that is possibly related to altered mineral crystal orientations (Cool et al. 2002), and reflects a cyclic annual formation pattern. Gustafson first introduced cementum for human age estimation (Gustafson 1950). Stott and co-workers were the first to publish a study on the use of cementum layer counting for age estimation in humans (Stott et al. 1982). Rai and colleagues reported that cementum apposition in impacted teeth can be used for age determination (Rai et al. 2008, 2009, 2010a, b). Increasing discoloration is due to the degradation of organic components in the dental hard tissues, the deposition of external substances in enamel and dentine, mineralization, and associated alterations in the refractive index (Bang 1989). Biedow (1963) suggested that tooth color should be added to Gustafson’s six-criteria system for age estimation (1950) instead of the root resorption parameter.

A chemical component that changes with age is the nitrogen content, which was found to increase with advancing age. It has been reported that the calcium content of teeth is higher in the coronal concentration than apical and also increases with advancing age (Bang and Monsen 1968). Another useful concept of age-related change in the chemical composition of dental tissues is the racemization of aspartic acid. In the living body, proteins are normally composed of the L-form of amino acids, turning polarized light toward the left. As age advances, L-aspartic acid will change into D-aspartic acid. An as-yet rare technique in dental age estimation is the analysis of the fluoride concentration in dentin.

The tooth roots were sectioned longitudinally and scanned in a transverse direction at the midroot area (Kvaal and Solheim 1989). Partial correlation coefficients demonstrated that an increase in fluorescence intensity is strongly associated with the deepening of dentin color even after correction for age and extraction reason. The fluorophores responsible for the respective emission peaks in the visible spectrum as well as the underlying cause for the deepening of dentin color with age still remain to be identified (Kvaal and Solheim 1989). The color changes in the cementum and dentin are caused by an infusion of decomposition products from erythrocytes (Fig. 3.2). 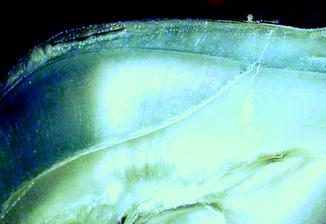 An example of an epidemiological criterion for age estimation is the Decayed, Missing, Filled, Teeth (DMFT) index. The DMFT index can be used for an orientation but does not have strong significance in human age estimation because of high interindividual variation and the influence of dietary habits and caries prophylactic measures (Endris 1979).

Miles presented a method that calibrated the rate and pattern of attrition in molars with eruption (Miles 1962). Extensively used is a method based on British Neolithic to medieval skeletal material, which was subdivided into four age subclasses (Brothwell 1963). Brothwell’s table represents the expected dentine exposure in the permanent first three molars. Rai et al. (2010a, b) proposed a new classification of dental age estimation from first molars for the Indian population.

Dental age estimation methods in children can be divided into different categories depending on the approach.

The most commonly used dental age estimation atlas techniques are those of Schour and Massler (1941), Moorrees and colleagues (1963), Gustafson and Koch (1974), and Anderson et al. (1976). These techniques are based on morphologically different stages of mineralization of all teeth (Willems 2001). Schour and Massler (1941) proposed 20 stages of tooth development from 4 months until 21 years of age, while Moorrees et al. (1963) proposed dental maturation of permanent teeth (maxillary and mandibular incisors) divided into 14 stages, from initial cusp formation to apical closure for both genders (Table 3.1). Gustafson and Koch’s (1974) technique proposed tooth development from mineralization, completion of crown formation, eruption, to completion of root formation.
Table 3.1
Tooth formation stages
Source: From Moorrees et al. (1963)