Mass disaster and medicolegal cases create a big problem in today’s society. With the increasing rate and complexity of crime, it’s becoming more difficult for the collection of feasible and suitable evidence and appropriate comparison methods. Equally, however, there has been incredible research that has led to technological advancements in forensic odontology on a global scale.

The NOMAD hand-held X-ray unit (Fig. 14.1) is very useful in mass disasters and medicolegal investigations. It is unfeasible to move the bodies to X-ray units to take radiographs in medicolegal cases and mass disasters. Thus a portable, handheld, lightweight, battery-operated investigative X-ray unit was developed to take the images on a big scale (Danforth et al. 2009). Called NOMAD, it is powered by a 14.4-V rechargeable battery. It is designed with a reduced weight and size for easy operator handling. The minimum intrinsic filtration in the X-ray beam is at least 1.5 mm. The source-to-skin distance is a minimum of 20–30 cm (Turner et al. 2004). The radiographic parameters of peak potential and anode current are both fixed at 60 kV and 2.3 mA, respectively. The only worker-adjustable parameter is the irradiation time, which varies from 0.01 to 0.99 s (Turner et al. 2004). It has many advantages over conventional radiography, including that it reduces the radiation dose to the patient, reduces the radiation leakage from the tube, and has less backscatter radiation. The backscatter radiation is absorbed in a lead-filled acrylic shield attached at the end of the exit cone. This shield has a lead-equivalent of 0.5-mm thickness and protects the operators’ hands, face, and gonads from backscattered radiation. 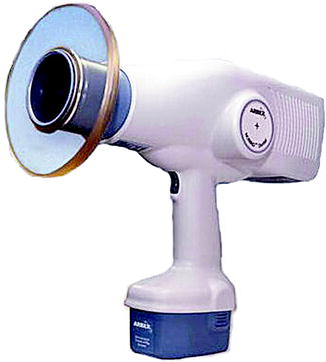 In three-dimensional computer-aided stereophotogrammetry, twin image pairs that have been adopted in the field of photography to permit the production of 3D stereoscopic images by taking two or more pictures of the same object at subtly different angles. A computer-based program was developed to construct 3D images of real-time objects. It utilizes the common Microsoft Windows operating system to provide an easy-to-use graphical user interface to capture the stereo image pair. It also uses a mathematical equation to build the wireframe 3D model as a data file (Mac 2000).

Magnetic resonance imaging (MRI) is a noninvasive imaging technique of mapping the internal structure and certain aspects of function within the body. It uses nonionizing electromagnetic radiation and does not expose the subject to radiation. It uses radiofrequency (RF) radiation in the presence of controlled magnetic fields in order to create high-quality cross-sectional images of the body in different planes. The MR images are built by placing the subject inside a large magnet, which induces a relatively strong external magnetic field. This leads the nuclei of many atoms in the body, such as hydrogen, to support them with the magnetic field. With the subsequent application of the RF signal, energy is released from the body, detected, and used to build the MR images (Heiss 2009). It gives clear pictures of the body’s interior, such as soft tissues, organs, and blood. MRI is very useful in crime scene investigation, especially in the analysis of bite marks. This analysis involves comparing the bite marks of the suspect on an apple with the bite mark on the victim’s body part. The suspect is asked to bite an apple. Then impressions are taken from the apple and from the victim’s bite mark, followed by making casts (Mac 2000). The collected subject material, apple or other fruit casts and dental stone casts, is sectioned into 2-cm3 samples. The images are captured and compared. Its advantages include being painless and noninvasive, having no radiation exposure, and differentiating among various soft tissues.

Cone beam computed tomography (CBCT) is accomplished by using a rotating framework to which an X-ray source and detector are fixed (Hatcher 2010). A divergent cone-shaped source of ionizing radiation is directed through the middle of the area of interest onto an area X-ray detector on the opposite side of the subject. The X-ray source and detector rotate around a fixed fulcrum within the region of interest (ROI). During the exposure sequence, hundreds of planar projection images are acquired of the field of view (FOV) in an arc of at least 180°.
Based on the available or selected scan volume height, the use of units can be designated as follows (Choi and Mah 2010) (Fig. 14.2): 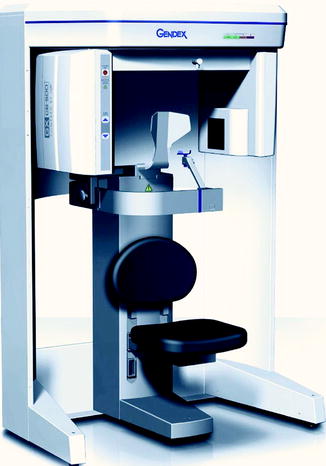