Creating facial harmony in patients seeking cosmetic surgery can be challenging, especially in those patients with facial disproportions. Aesthetic disharmonies are often related to both soft tissue and bony structures of the face. The skeletal pillars that support the facial soft tissues in the horizontal, sagittal, and vertical directions include the zygomatic eminence, the lateral and infraorbital rims, the zygomatic arches, and the mandibular rami.1 In the youthful face, this skeletal support system forms a ground-level foundation, fixing facial soft tissues through its retaining ligaments. In contrast, facial aging is in large part related to laxity in ligamentous attachments and associated descent of soft tissue adjacent to these points of fixation.2,3 Although attempts at restoring facial volume and contour are most often beneficial in creating a more youthful appearance, quite often the opportunity for significant improvement in overall facial attractiveness and harmony achieved with bony alteration or contouring is overlooked. The application of craniofacial principles to aesthetic surgery is a powerful tool that works synergistically with traditional rejuvenation techniques to produce more dramatic improvements through skeletal modification (Figure 17.1).

Generally speaking, alteration of the bony foundation of the face allows for more consistent results than do attempts at soft-tissue contouring alone.4

This is especially so for results obtained with osteotomy compared with alloplastics, for augmentation in the vertical direction.5–7 Bony reduction of the mandible or frontal bone may also be effective in the appropriately selected patient, especially those presenting with conditions such as frontal sinus hyperpneumatization, benign masseteric hypertrophy, and vertical macrogenia. 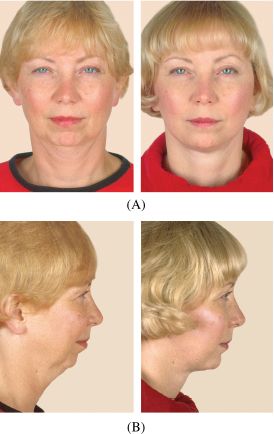 Figure 17.1. Pre- and postoperative anteroposterior (A) and profile (B) photographs showing the dramatic difference seen by applying craniofacial principles to aesthetic surgery.

When feasible, bony augmentation of the facial skeleton should be favored over reduction since reduction of skeletal support may lead to relative skin excess or ptosis. Augmentation, on the other hand, even when done beyond cephalometric norms, tends to enhance the youthful appearance.1,6

Orthognathic surgery can also improve both form and function in patients with congenital and developmental jaw deformities and therefore offers ideal correction. If by chance this type of surgery has been offered (i.e., vascularized osteotomies) during aesthetic consultation and the patient has confirmed that this procedure is unacceptable, then alternatives for appearance improvement, including osteotomies and implant augmentation, can be discussed. Of note, dental relation takes precedence, and therefore each patient’s occlusion should be assessed briefly before discussion of genioplasty. The major factors are overjet, overbite, and incisor show at rest and repos.

Options include bone contouring, skeletal augmentation with autogenous bone grafts, alloplastic implants, and bone substitutes to the midface/lower face. The surgeon equipped with a wide armamentarium to perform these procedures will be best suited to tailor the operation to the specific needs of the patient, thereby delivering the optimal aesthetic result.2

Aesthetic surgery can be quite challenging, since perfection is often the goal. Cosmetic surgery that includes craniofacial applications offers the opportunity for dramatic improvement with a variety of minimally invasive, skin-sparing, craniofacial approaches.

Attention to detail is of paramount importance. This begins with the very first in-office consultation. A thorough history and physical examination should be accompanied by life-size photographs or computer imaging, or both. These modalities are used as a guide for the surgeon and the patient, so that both parties are in full understanding when discussing realistic postoperative expectations and potential complications.

During consultation, the face should be analyzed in the frontal, oblique, and profile views. A number of techniques can be used for soft-tissue cephalometric analysis. A commonly used analysis divides the face into three equal anatomic aesthetic zones: the first involving the area from the hairline down to the glabella, the second extending from the glabella to the columella-labial junction, and the third from the columella-labial junction to the menton (Figure 17.2). This method of analysis can be used for rapid evaluation during consultation as well as during careful photographic preoperative planning. Whitaker and Bartlett described the ideal transverse dimensions in the adult face from a craniofacial perspective, finding that the bitemporal distance is about equal to the bigonial distance, which together are both less than the bizygomatic distance (this corresponds to the oval or diamond-shaped face).1,8

Whitaker1,8 and Bartlett8 also noted that the forehead/frontal region, the zygomatic eminences, and the gonial angles should all be seen as high-light areas, while the temporal and buccal sulcus regions should remain as low-light areas. Also, a prominent gonial angle is often considered attractive whereas a steep mandibular plane is not. In a face with harmonious lower facial proportions on profile view, when a tangent is drawn from upper lip to lower lip, the chin falls on this tangential line (also known as Riedel’s plane9) (Figure 17.3). 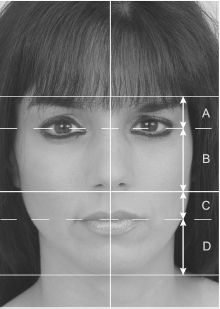 Surgeons performing aesthetic surgery should remain vigilant for patients desiring repetitive, unnecessary surgery. These patients, although rare, can be extremely difficult to manage, and are referred to in the literature as having either “dysmorphic personality disorder” or “body dysmorphic disorder.” The mean age of onset for this psychiatric disorder is reported to be 16 (±7) years; most patients seeking treatment are in the 20- to 30-year-old age range.10 The typical course is often progressive rather than episodic, and remission is unfortunately rare. Men and women are affected with equal frequency, but men have been found more likely to remain single and unmarried.11,12 The incidence of body dysmorphic disorder in cosmetic surgery patients varies considerably in the literature, depending on a variety of factors that include patient age and type of procedures considered. This incidence has been documented to be as high as 15% of cosmetic patients in some studies. 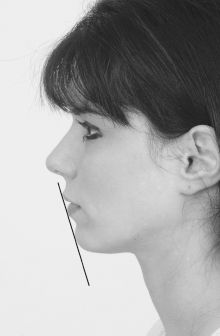 Figure 17.3.  A tangent is drawn from upper to lower lip. Ideally, the soft-tissue pogonion should fall on this line.

Rhinoplasty is one of the most commonly pursued operations in this patient population.13,14 Revealing characteristics include patients presenting with numerous photographs, having an unrealistic perception about the severity of their own cosmetic deformity, or presenting to the office with a predetermined surgical plan. Operating on these patients should be avoided, as expectations may be unattainable and postoperative satisfaction is routinely difficult to achieve.15–17

A variant of the dysmorphic personality is the “plastic surgery junkie.” This patient is often satisfied with surgical results, but later focuses attention on other parts of the body. Perhaps this represents a happier group on a continuum of the disorder.

Augmentation of the frontal bandeau, forehead, and bitemporal regions can all be done either endoscopically or with a bicoronal incision. If the temporal fossa needs to be augmented, the dissection should be taken along the deep temporal fascia in order to stay deep to the frontal branch of the facial nerve.18,19

The dissection is then taken deep to the temporalis muscle in the subperiosteal plane along the temporal bone to the level of the lateral orbital rim, as one does when performing a fronto-orbital advancement.20,21 Because of the risk of long-term bone graft resorption, prosthetic materials are often the best choice in this situation. Augmentation can be carried out with either a solid or porous implant secured at the periphery, preventing unwanted migration, or by using methyl methacrylate or calcium phosphate-based cements. Regardless of implant material, the temporalis muscle and fascia must be redraped over the implant and properly secured back to the temporal fusion line anatomically to prevent displacement or foreshortening.22,23

Ousterhout characterizes the male forehead according to the degree of frontal sinus bossing.24 The typical male forehead has varying degrees of frontal bossing that transition superiorly before becoming convex at the hairline. In contrast, an attractive female forehead is without bossing and has a continuous, mild curvature from eyebrow to hairline. A low hairline is a sign of attractiveness and youth in both males and females. Hairline lowering is often combined with forehead contouring in the transsexual population.24,25 Anterior hairline correction may also be indicated in neurosurgical patients postcraniotomy. In these cases, the hair-bearing scalp may be widely undermined posteriorly in the subgaleal plane. It is then advanced anteriorly using cortical tunnels to hold the scalp in this position. This is the best means of lowering the anterior hairline.

The surgical feminization procedures described by Ousterhout and colleagues classify the forehead into three groups.24 Each reconstructive method is chosen based on the thickness of the anterior wall of the frontal sinus, which mandates preoperative imaging such as a frontal radiograph and lateral cephalogram (Figure 17.4). All frontal sinus irregularities can be approached by a bicoronal incision, extending one’s dissection subperiosteally laterally to the temporal fusion lines and caudally to the supraorbital neurovascular bundles. Type I patients have mild frontal sinus bossing and a thick anterior wall of the sinus that can be easily corrected with reduction by burring down the anterior wall alone.24,25

For individuals presenting with mild bossing and a thin anterior table (Type II), bony contouring may need to be combined with a camouflaging procedure just cephalad to the sinus prominence, using a methyl methacrylate onlay. If there is a thin anterior table as well as hyperpneumatization of the sinus (Type III) (Figures 17.5 and 17.6), then one needs to perform an osteotomy of the anterior wall of the sinus. The anterior wall is contoured and flattened and placed back as a bone graft, fixed with microplates, and a bone graft is added if necessary (Figure 17.6).26 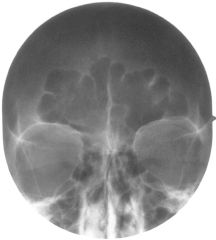 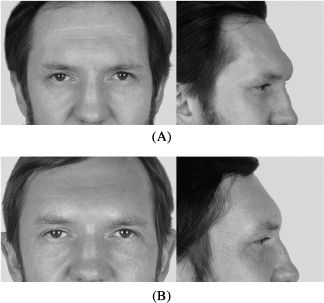 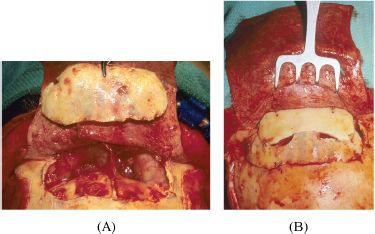 Figure 17.6.  (A) Intraoperative view of same patient as in Figure 17.5 with hyperpneumatized frontal sinus. Osteotomy of the anterior wall of the frontal sinus has been performed. (B) The osteotomized bone has been contoured and flattened and replaced as a bone graft. Additional cranial bone graft has been added.

Significant improvements of the midface in terms of form and function can be achieved by orthognathic surgery. For this subset, techniques for malar augmentation commonly include autogenous bone grafts and alloplastic implants. Regardless of the technique chosen, careful analysis of the deficiency on both physical examination and radiographic evaluation affects surgical planning. One should always note the thickness of the midfacial soft-tissue envelope to help predict whether the implant or bone graft’s edges will be obvious. In addition, the profile view will reveal the convex or concave parasagittal line. Parasagittal convexity is a major contributor to aesthetic harmony.27

According to Terino, the most common zones requiring augmentation are zones 1, 2, and 5.33 He believes augmenting zones 1 and 2 leads to a more angular appearance, with a well-defined midface and increased bizygomatic distance (Figure 17.7), while augmentation of zone 5 is best reserved for patients who require a fuller, more round appearance. This is a technique that we often use in facelift surgery after massive weight loss and for patients with lipodystrophy after standard triple-drug therapy for human immunodeficiency virus. Although temporal, periorbital, and facelift incisions have all been described for malar augmentation, an intraoral approach through an intraoral buccal sulcus incision is most commonly used. It allows for optimal visualization and avoids a scar. There is, on the other hand, a higher risk of implant contamination and subsequent infection using this approach. However, in most cases of implant infection, micromotion is the culprit, which confirms the need for subperiosteal dissection and screw fixation. Perioperative antibiotics covering oral flora and antibiotic irrigation are both used to minimize overall risk.29,31,33