Fig. 9.1
Surgical endodontic treatment of the first mandibular molar
A knowledge of all the possible complications and their clinical and radiological signs, together with the application of techniques for their management, is fundamental to successfully perform an adequate root-end management.

The resection of the root end was traditionally recommended in order to remove the contaminated apical part of the root canal and to provide access for retrograde cavity preparation [1, 2]:
But, in some cases, the benefits of root resection could be questionable:
Abrasion of the root apex can be an alternative to the direct cut of the apical portion. Abrasion allows a better control of the length of the portion that is excised and can help to correct small variability in bevel angle. Moreover, abrasion is an easier technique to perform than apex resection, because it can limit the possibility of an undesirable migration of the resected apex into the sinus cavity, when there is communication of the lesion with the maxillary sinus.

When the apical end of a root is removed, the remaining surface of the root is described as having been “beveled” [6]. The shape and direction of the bevel can strongly influence both success rate of the whole procedure and the incidence of complications that may occur.
Historically, a long bevel was proposed in order to obtain a better visualization, especially in posterior regions, of the root end and an easier access while preparing the retrograde cavity. However, nowadays, several drawbacks can be evaluated and considered while using a large bevel which has to be avoided due to the improvements in technique and instruments available. Main complications and drawbacks can be:

Crown-to-root ratio is defined as the physical relationship between the portion of the tooth within the alveolar bone and the portion not within the alveolar bone, as determined radiographically [8]. While an ideal crown-to-root ratio of 1:2 has been suggested for a tooth to serve as an abutment, it is rarely observed in practice. The original guidelines for crown-to-root ratio in the selection of abutments were found to be exceptionally conservative and treatment limiting, and 1:1 ratio might be adequate in cases with a carefully designed occlusion and controlled periodontal inflammation [9].
Various clinical procedures have been reported to directly affect the crown-to-root ratio such as abutment preparation for overdentures, surgical crown lengthening, and forced eruption [5].
Endodontic surgery cuts off the apical root and may result in an unfavorable crown-to-root ratio.
While most roots have a conical shape, molars have root trunk portion with wider surface area than just conical root portion. Thus, on these teeth the loss of apical root is less significant for alveolar bone support [10].
The most common cause of increased crown-to-root ratio is marginal periodontitis [11]. Cervical bone support is the most important to sustain the stresses from occlusal load. Therefore, periodontal bone loss is detrimental to the prognosis of abutment tooth. On the contrary, apical root resection is not as harmful as periodontal bone loss because the occlusal stress concentrates on the cervical area, not on the apical area [10].
However, from an anatomical point of view, the amputation of the apex, which decreases the longitudinal distance between alveolar bone margin and resected root end, can increase the risk of endo-perio communication, increasing the risk of infection spread.
The preservation of an adequate crown-to-root ratio should be considered essential in endodontic surgery. The use of a minimum bevel allows a greater preservation of the tooth structure than a larger bevel does. However, it should be taken into consideration that the main goal of endodontic surgery remains the regeneration of periapical tissues after the removal of the infectious periapical noxa. As reported, the aim of preserving tooth structure must not compromise the goal of endodontic surgery [12].

Missed multiple canals or missed complete roots are among the most severe complications because it may compromise the success of the procedure due to persistence of pathogens in contact with the tooth surrounding the tissues.
This occurrence can be caused by an inadequate root resection or incomplete visualization of the anatomy both in planning and in surgical phases. Missing root canal anatomy is strictly linked to the anatomy of the tooth or of the root that has to be treated (Fig. 9.4).
It is known that many variations can be observed in the root canal anatomy of the tooth, as described by Vertucci [13]. In his publications the authors described a number of different root canal anatomical features, classifying them on the basis of the number of canals and isthmus or communications among them (Fig. 9.5). 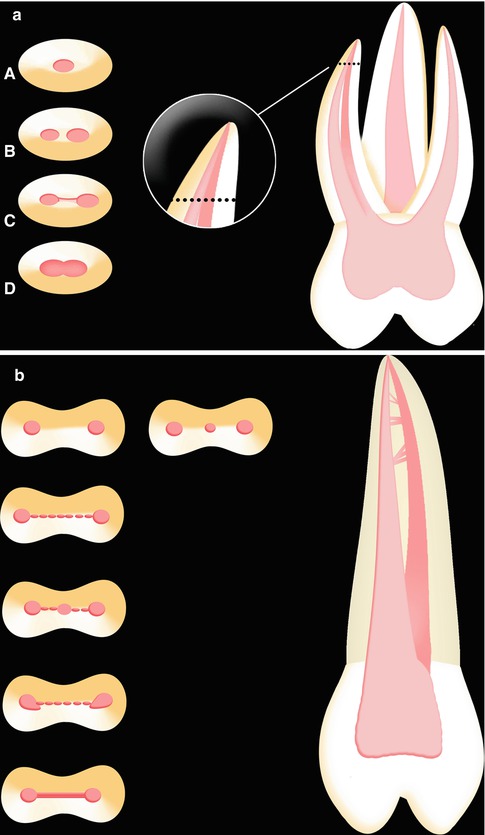 So, the shape of the root canal end after resection can be different on the basis of the position of the resection plane, affecting the three-dimensional sealing procedure. A deep knowledge of root canal anatomy allows an appropriate planning of the procedure and, during the surgery, can reduce the risk of missing root anatomy. 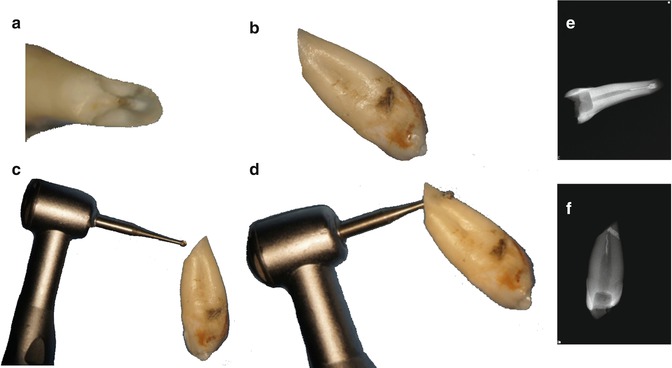 Fig. 9.6
The figure shows a clinical situation when a 45° angle of resection was used (a, b). In figure (b) and (c) an inadequate visualization together with an inappropriate use of the device can cause a perforation (palatal) due to the angulation. In figure (e) and (f) it is evident that the perforation is visible only through a radiograph in mesio-distal direction
Only gold members can continue reading. Log In or Register to continue