Fig. 16.1
Surgical bone crypt covered by a barrier membrane
Can barrier membranes prevent epithelial cells in the mucoperiosteal flap from migrating into the surgical bony crypt? Indeed it can, but is it necessary? The basal cells of epithelium attach to a layer of connective tissue called basement membrane (BM) by hemidesmosome. BM consists of basal lamina (laminin, type IV collagen) and reticular lamina (type III collagen). BM is very resistant to penetration by proliferating basal cells caused by inflammatory or benign hyperplasia. Only malignant epithelial cells, such in carcinoma, are capable of degrading basement membrane by producing proteolytic enzymes (matrix metalloproteinases, collagenase) and invade the underlying connective tissue [32]. Therefore, epithelial cells in the mucoperiosteal flap are not able to penetrate into the surgical bony crypt even without using barrier membranes after endodontic surgery.
It is generally believed that fibroblasts move faster than osteoblasts to occupy the bony crypt after apical surgery. Consequently, a scar tissue is formed in large bone defects after periapical wound healing [17, 56]. Barrier membranes are presumably utilized in apical surgery to prevent proliferation of fibroblasts from the surrounding tissue into the bony crypt [16, 17, 56]. Cell movement is a complex biologic process and does not simply depend on cell mobility. Cell surface integrins, extracellular matrix molecules, and gradient of chemokines as well as growth factors regulate cell movement ([38]). Fibroblast is one of the slow-moving cells. It has been demonstrated that fibroblasts move slower than keratinocytes and leukocytes because they apply force to bind to the extracellular matrix much larger than the force required for their movement [38]. In addition, the speed of cell migration depends on substratum ligand level, cell integrin expression level, and integrin-ligand binding affinity [53]. For example, if very few extracellular matrix ligands expressing RGD-sequence-containing peptide are available, cell surface integrins cannot get a strong enough grip to ligands and enable them to move. If there are too many extracellular matrix ligands, cell surface integrins bind firmly to ligands and get stuck in place [53]. Importantly, during periapical bone wound healing after apical surgery, the newly differentiated osteoblasts are derived from bone marrow mesenchymal stem cells and osteoprogenitor cells lining the endosteum, which are in the bony crypt [31]. These osteoblasts do not have to compete with fibroblasts from surrounding tissue to occupy the surgical bony crypt.
There are studies showing significantly more new bone formation after apical surgery when barrier membrane was used as compared to controls in short-term clinical follow-up or animal experiment [5]. On the contrary, other studies have demonstrated no beneficial effect by utilizing barrier membrane to improve new bone formation after apical surgery [10, 24, 43, 72]. When both buccal and lingual bone plates of the jawbone were perforated at the time of endodontic surgery, it was demonstrated that the defects were significantly related to later development of scar tissue in a human study [62]. Similar findings were also observed in clinical case studies [56, 73]. Histologically, it has been shown that fibrous connective tissue from the surrounding mucoperiosteum could proliferate into the through-and-through bone defects artificially created in the jawbone and formed a scar tissue if barrier membrane was not used in short-term animal experiments [6, 16, 17, 31]. However, osseous regeneration with ingrowth of fibrous connective tissue was also observed in three of eight cases with barrier membrane at 9 weeks of animal experiments [16]. The studies of Grung et al. [27], Halse et al. [29], and Molven et al. [45] showed that there was a difference in incomplete healing of bone lesions in periapical surgery after comparing 1- and 4-year outcomes. The incomplete healing group had a tendency to reduce in size if follow-up time was extended. Most studies of GTR technique in endodontic surgery are to compare the rate of new bone formation during the course of wound healing and not to evaluate the efficacy of bone remodeling between experimental and control groups. Large periapical lesions take a longer time to heal after surgical endodontic therapy if root canal infection is under control [62]. Therefore, a longer period of clinical follow-up or experimental observation is needed to assess the outcome of periapical bone wound healing when a barrier membrane is used in endodontic surgery.
An important question is: Can barrier membranes in endodontic surgery completely exclude fibroblasts from proliferating into the bone crypt? Apical surgery involves not only cortical bone but also trabecular bone. Blood clot and granulation (fibrovascular) tissue formation in the bony crypt after apical surgery are essential components of the process of bone wound healing [20] and precede bone matrix production by osteoblasts. Fibroblasts in the granulation tissue in the bony crypt are from several sources, such as the periosteum, bone marrow stromal compartment, and PDL. In addition, bone marrow mesenchymal stem cells are capable of differentiating into fibroblasts [22, 30]. Therefore, barrier membranes might be able to prevent fibroblasts in the surrounding tissue from proliferating into the bony crypt but cannot exclude fibroblasts originating from the bone marrow and PDL, which are already present in the bony crypt.
Application of barrier membranes in through-and-through bony crypts after endodontic surgery might create a microenvironment, which is conducive for osteogenesis in a short-term experimental observation or clinical follow-up as compared to without barrier membranes. However, the cellular and molecular biology of wound healing of through-and-through bone lesions after endodontic surgery and scar formation is not fully understood.
Based on limited information in the literature, through-and-through bone defects could benefit from application of GTR technique using bioabsorbable barrier membranes after endodontic surgery to improve the rate of new bone formation in short-term observation [77, 83, 86]. Barrier membranes should be approved according to the Food and Drug Administration (FDA). The use of barrier membranes must follow manufacturer’s instructions. The barrier membrane should cover the bone defect at least 3 mm beyond the margins of the defect and be stable to avoid collapse into the bone defect. Foreign materials such as barrier membranes can easily invite infection [23, 50]; therefore, contamination should be avoided during surgical placement of the barrier membrane.

Bone grafts are used as a matrix or scaffold to fill the bone defect (Fig. 16.2) and to improve new bone formation in orthopedic surgery, craniofacial surgery, periodontal surgery, and apical surgery [54]. Extracellular matrixes, such as bone grafts, are capable of regulating tissue-specific stem cell differentiation [13]. Autologous bone, the gold standard of bone grafting, provides optimal osteoconductive, osteoinductive, and osteogenic properties [25]. It has the capability to regenerate bone from bone-forming cells (bone marrow mesenchymal stem cells) [19, 25]. However, autologous bone grafts have several disadvantages, such as donor site morbidity [82, 84, 85], limited availability, and cosmetic problems [25, 54]. Accordingly, bone graft substitutes have become a popular and alternative choice. Bone graft substitutes can be divided according to their properties of osteoinduction and osteoconduction (7, 19, 54]). Osteoinductive bone grafts, for example, demineralized bone, are capable of supporting the mitogenesis of adult mesenchymal stem cells, leading to the formation of osteoprogenitor cells with the capacity to form new bone [1, 19]. Osteoconductive bone grafts, such as calcium sulfate, are able to support the attachment of osteoprogenitor cells for subsequent bone formation [1, 19]. 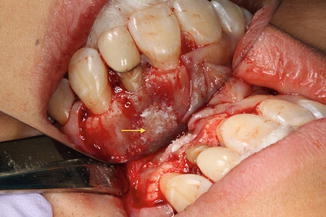 There are other clinical conditions, in which barrier membranes and/or bone graft substitutes are recommended in endodontic surgery [83]. Barrier membranes are used to improve periodontal tissue regeneration and avoid periodontal involvement during endodontic surgery in combined endodontic-periodontic lesions [11, 26, 52, 75] and large periapical lesions extending almost to the alveolar crest bone (<3 mm crest bone remaining) [60]. Barrier membranes and/or bone graft substitutes could be used in cases of buccal bone dehiscence to regenerate bone attachment in endodontic surgery [21, 59, 65, 68]. In cases of large periapical lesions penetrating through both buccal and palatal cortical bone plates, GTR technique has been shown to improve outcome of bone regeneration following surgical endodontic treatment in a systematic review [77].

Prevention and Management of Complications of GTR Technique in Endodontic Surgery

GTR technique in periodontal therapy can produce a significant improvement over conventional open-flap debridement in regeneration of the attachment apparatus because the outcome of open-flap debridement alone is poor due to direct challenge by oral microorganisms and apical migration of junctional epithelium [48]. GTR technique in implant dentistry is able to improve the rate of new bone formation so that the dental implant can be placed as soon as possible. GTR in endodontic surgery is to help the host create a favorable environment to improve the rate of periapical wound healing. If intraradicular infection is controlled by adequate orthograde and retrograde fillings, the periapical wound should heal satisfactorily after endodontic surgery even without using GTR technique [67, 76]. However, in cases of through-and-through periapical lesions, GTR may have a beneficial effect on the outcome of periapical bone healing [77]. Scar tissue sometimes may be formed in the periapical area after endodontic surgery of large periapical lesions but is not considered a treatment failure.
Based on limited information in the literature, through-and-through bone lesions or defects of the jawbone [77] and combined endodontic-periodontic lesions appear to be able to benefit from GTR technique to promote the rate of periapical wound healing after endodontic surgery. However, if root-end management is inadequately performed during endodontic surgery, GTR technique, for example, bone graft placement may obscure the destructive pathological process. This would lead to delayed diagnosis of the treatment failure and further compromise the long-term outcome as well as jeopardize the success of future retreatment (Fig. 16.3, 16.4 and 16.5). 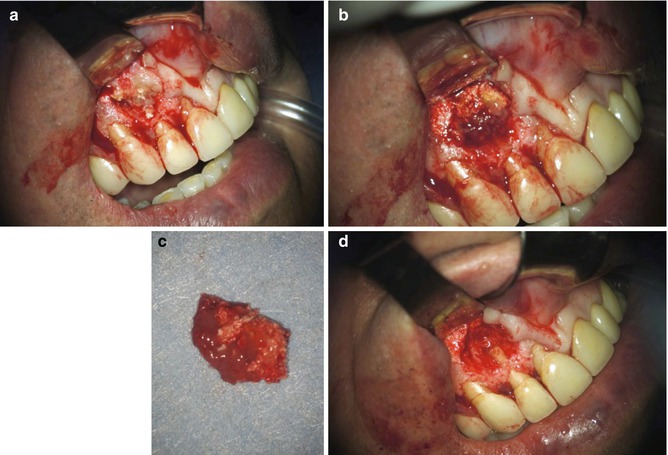 Fig. 16.4
Complication of endodontic surgery performed in a traditional technique using GTR. Intraoperative: Surgical retreatment: following flap elevation pathological fenestration of cortical plate (a), a large bony defect filled with granulation tissue and remnants of the grafting material (b). The granulation tissue and the grafting material were removed (c); the root end was surgically retreated using a modern technique (d)

Fig. 16.5
Complication of endodontic surgery performed in a traditional technique using GTR. Postoperative: Sutures were placed, and a routine postoperative management protocol was applied
GTR technique does not necessarily enhance the successful outcome (absence of signs and symptoms and resolution of apical periodontitis) of endodontic surgery, which requires elimination of intra- and/or extraradicular infection [62]. Nevertheless, GTR technique in endodontic surgery appears to be able to promote the rate of periapical bone healing in large periapical lesions eroding both buccal and palatal cortical bone plates. Long-term prospective, controlled clinical trials are needed to carefully evaluate the successful outcome, safety, efficacy, and cost-effectiveness of GTR technique in endodontic surgery.
References
1.
Only gold members can continue reading. Log In or Register to continue