•   Specialist feeding and nursing advice should be implemented at the time of birth.

•   The child and parent should be seen in a multidisciplinary outpatient clinic soon after birth by team members who will be involved in their long-term care.

•   Details of surgery should be discussed at this outpatient visit and dates for surgery provided where appropriate.

•   The parents should be taken to see the ward to familiarize them with the hospital facilities.

•   All parents given the option of genetic counselling at birth (particularly important if syndromic diagnosis is suspected).

•   Traditionally risk has been given as a percentage:

•   risk of having a second child with cleft lip and/or palate—4%;

•   risk if a member of the family has CLP to a first-degree relative—2%;

•   risk if a member of the family has CLP third-degree relative—0.3%.

•   relative risk of cleft recurrence in first-degree relatives is 32 for any cleft lip and 56 for cleft palate alone;

•   the parent–offspring risk is similar to the sibling–sibling risk;

•   does not affect the risk of having a cleft.

•   Clefts of the lip cause cosmetic and functional problems.

•   in the production of bilabial sounds (pa, pi);

•   of maxillary growth because of scar constriction.

•   Babies with isolated cleft lip can usually feed normally, although they may have difficulty creating an adequate lip seal.

Anatomical defects in UCLP include:

•   Discontinuity of skin, muscle, and oral mucosa of the upper lip on cleft side.

•   Vertical soft tissue deficiency on medial aspect of the cleft.

•   Abnormal muscle insertions into nasal spine and alar base.

•   Alveolar cleft in region of the canine tooth.

•   Defect in primary palate anterior to the incisive foramen.

•   Rotation of septum, columella, and nasal spine away from the cleft.

•   Separation of domes of the alar cartilages at the nasal tip and kinking of the lateral crus on the cleft side.

•   Dislocation of lower and upper lateral cartilages on the cleft side.

•   Displacement of alar base in all three planes of space.

•   Displacement and flattening of the nasal bone on the cleft side.

Anatomical defects in BCLP include:

•   Discontinuity of skin, muscle, and oral mucosa of the upper lip bilaterally.

•   Central segment consisting of prolabium and pre-maxilla with short columella.

•   Neonatal lip repair, while still practised in some units abroad, has fallen into disrepute in the UK.

•   Many different protocols for lip and palate repair worldwide.

•   The following protocols and timings reflect practice in most UK cleft centres.

•   The lip, nose, and anterior palate are repaired at the first surgery at 3–5 months of age in healthy children.

•   Anterior palate is repaired with an unlined turnover flap from the vomer (popularized by surgeons in Oslo, Norway) (Fig. 7.1). 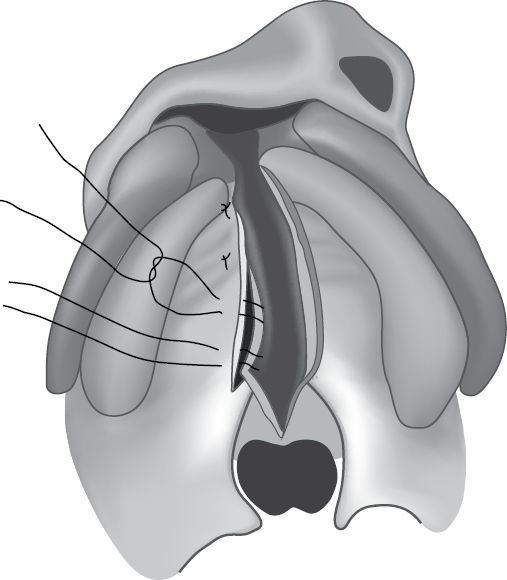 Fig. 7.1 Vomer flap for hard palate repair in a right unilateral cleft of the lip and palate.

Important steps in lip repair include:

•   Natural appearance of the cupid’s bow.

•   Inconspicuous scarring and restoration of the nostril floor.

Many different techniques have been described for lip repair:

Individual techniques have advantages and disadvantages:

•   allows some leniency in surgical technique (cut as you go);

•   may result in short lip on cleft side;

•   useful for repairing a wide cleft;

Many now use a combination of these two techniques to take advantage of the strengths of each technique and discard the weaknesses (Fig. 7.4). 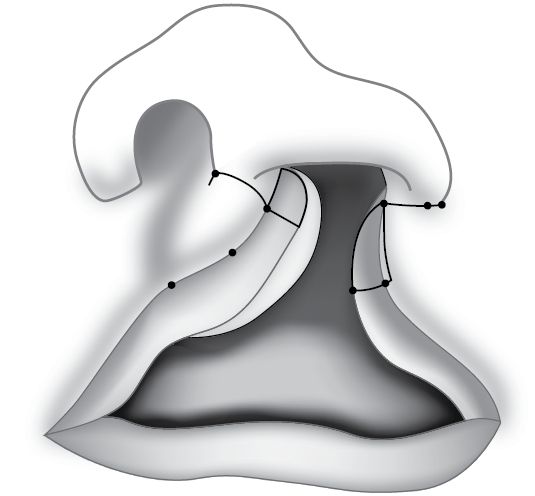 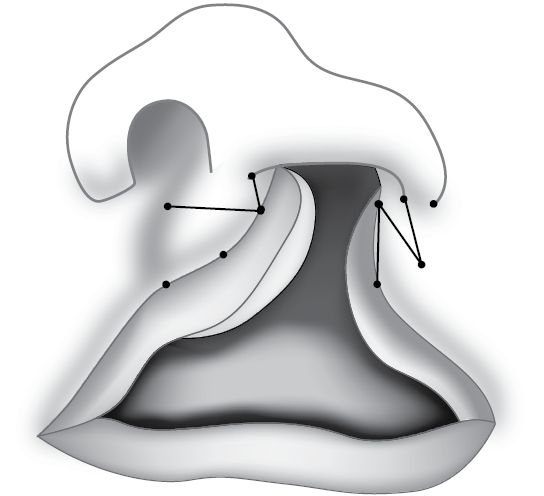 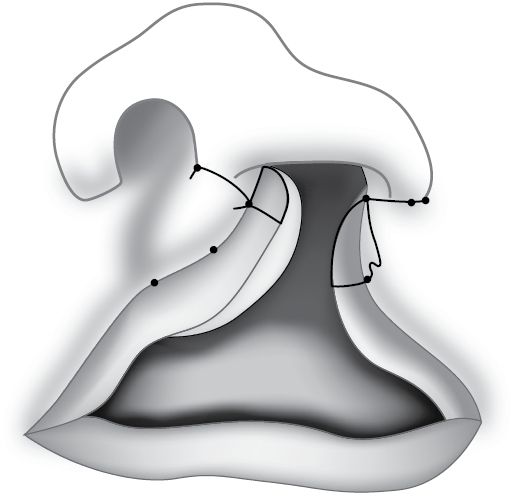 •   Radical subperiosteal mobilization of tissues of the cleft side (which includes incision through inelastic periosteal layer) to orbital rim, zygomatic process, and pyriform rim. It is important to ensure that muscle and skin is closed without undue tension; this also aids in accurate repositioning of the alar base.

•   Skin of the lip is dissected off the muscle medially and laterally.

•   Primary bone grafting or gingivoperiosteoplasty (GPP; at the time of lip repair) is not widely practised in UK.

•   Pre-surgical orthopaedics for unilateral cleft lip and palate patients is not routinely carried out in UK.

•   separating skin from the alar cartilage on the cleft side (as described by McComb and Andel);

•   approached both from lateral and medial aspects of the alar cartilage through the skin incisions already made for the lip repair;

•   use of pre-surgical orthopaedics;

•   Formal surgical repair is often preceded by pre-surgical orthopaedics to reposition the premaxilla posteriorly and align the lateral alveolar segments.

•   Symmetry should be maintained meaning that repair of both sides should occur simultaneously (asynchronous lip repair is practised by three units in UK and Ireland).

•   Establish primary muscle continuity (if undue muscle tension exists at time of primary repair then final muscle repair is deferred for about 9 months to a year).

•   Reconstruction of the labial sulcus from the prolabial mucosa and lateral lip elements (some rely on muscle action to create a labial sulcus and do not formally reconstruct the sulcus).

•   complete closure with a vomer flap on both sides;

•   complete closure on one side only leaving the contralateral side open.

•   Variation in hard palate repair exists because raising a full bilateral vomerine flap may compromise blood supply to the pre-maxilla, but raising the flap to the pre-vomerine suture and no further is thought to maintain the blood supply to the pre-maxilla. If only one side is repaired at the first surgery then the child is brought back after approximately 6 weeks to close the contralateral side with a vomer flap.

•   The nose is repaired as previously described for unilateral patients except both sides of the nose are dissected and primary positioning of the alar cartilages is carried out to construct the nasal tip and columella.

•   Principles are the same as for complete cases and a functional repair should always be carried out.

•   It is also important to address the nose in incomplete cases as there is usually a lip/nose deformity.

•   Timing of palatal repair is controversial:

•   early closure prior to 1 year has been shown to benefit speech;

•   delayed hard palate closure has only shown consistently improved growth when delayed into adolescence, but this results in unacceptably poor speech.

•   Common practice in UK is to close the soft palate in cleft lip and palate patients and the entire palate in isolated cleft palates between 6–9 months. 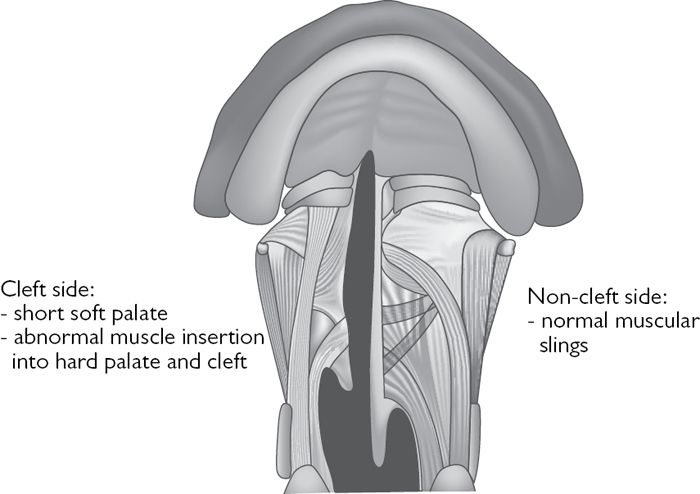 Fig. 7.5 Palatal muscles—normal vs cleft side.

•   Many different techniques have been used to close the palate including:

•   Veau–Wardill–Kilner push-back techniques still widely used in some countries, but abandoned in UK because of:

•   Sommerlad repair of the palate with microscopic magnification recreation of the levator veli palatini sling is widely practised in UK. Procedure involves:

•   incision along cleft margin at junction of oral and nasal mucosa;

•   mobilization of mucoperiosteum of hard palate in subperiosteal plane;

•   separation of oral mucosa with minor salivary glands from muscles and nasal mucosa;

•   separation of tensor veli palatini and palatopharyngeus from the back of the hard palate;

•   lateral releasing incisions in the oral layer (Von Langenbeck) are used to reduce tension on the oral repair in <15% of cases (usually only) in extremely wide clefts;

•   hard palate is raised as two flaps subperiosteally giving access to soft palate musculature, which is repaired with an intravelar veloplasy;

•   normal or near normal speech reported in >85% of patients.

•   Creation of a platform for prosthetic replacement, e.g. implants.

•   Create support for the nose (alar base) and lip.

•   Important to decide whether tooth extractions need to be done. At the time or at least 3 months before to allow attached gingiva to heal.

•   Pre-surgical orthodontic treatment to align alveolar segments and optimize position of teeth adjacent to the cleft.

•   Pioneered by Boyne and Sands.

•   Mucoperiosteal flaps are raised on both sides of the cleft on the buccal and palatal sides (Fig. 7.6).

•   Reconstruction of nasal layer and create a nasal seal.

•   Nasal dissection superiorly up to the piriform rim and nasal floor.

•   Some place collagen membrane below the nasal layer to improve the nasal seal.

•   Bone is packed into the space between the nasal layer and oral layer bridging the alveolar segments, and should extend posteriorly into the palatal cleft, superiorly to the nasal floor, and laterally to the paranasal region.

•   Defect should be over-filled as resorption of up to 30% may occur.

•   Post-surgical orthodontics follows to provide stability, while bone graft is incorporated and heals. 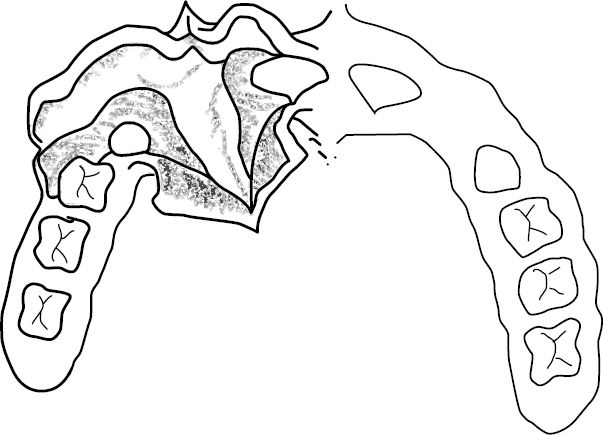 Outcome assessment of grafting is based on:

•   Eruption of canine and bony support for adjacent teeth.