The pathological classification of salivary gland neoplasms became a subject of interest during the second half of the 20th century, and a considerable number of new entities were identified. Since 1954, there has been a doubling in the number of categories of both benign and malignant tumors in this area. Since the publication of the first World Health Organization (WHO) international histological classification of tumors in 1972, the number of distinct benign salivary gland tumors has increased again, reaching 13 in the recent revised classification (Table 20.1).1 In quantitative terms, pleomorphic adenoma is the most frequent benign tumor of both the major (extraoral) and minor (intraoral) salivary glands. Warthin tumors account for 10%–15% of benign epithelial salivary gland tumors. All other adenomas are rare.

The majority of benign salivary gland tumors are adenomas and can be considered to represent a range of morphological differentiation (Fig. 20.1). At the midpoint lie the more commonly encountered pleomorphic adenomas, in which the proliferation of epithelial ducts and myoepithelium-derived stromal appearances has been shown to be monoclonal in origin, based on polymerase chain reaction (PCR) analysis of the human androgen receptor gene. Pleomorphic adenoma is the most common benign tumor in the salivary glands, representing 70%–80% of all salivary gland neoplasms. It is the matrix production and mesenchymal morphological metaplasia, resulting in a “mixed” appearance, that distinguishes this category from other so-called basal cell adenomas and the rare myoepitheliomas. Whereas the myoepithelial component in basal cell adenomas is usually histologically unremarkable without the use of biomarkers and matrix is lacking, myoepitheliomas are by definition composed only of myoepithelial cells, which may have various and mixed morphologies but exhibit some hyalinized and myxoid matrix production as well.2 At the far end of the adenoma spectrum lie benign tumors composed purely of tubular cells—the canalicular adenomas. 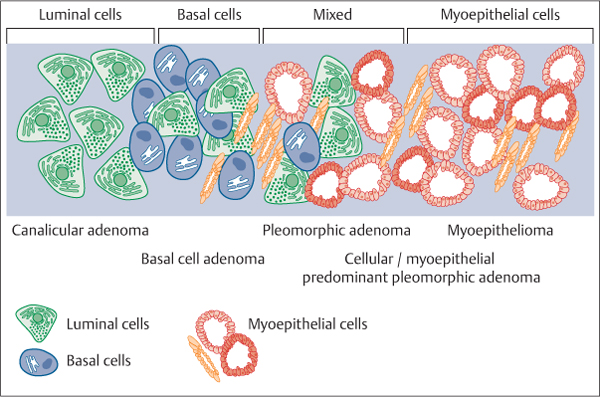 Fig. 20.1 Benign epithelial salivary gland tumors represent a morphological spectrum of differentiation. At the end of the adenoma spectrum lie benign tumors composed purely of tubular cells, the canalicular adenomas. The myoepithelial component in basal cell adenomas is usually histologically inapparent. At the midpoint lies pleomorphic adenoma. The myoepitheliomas are composed only of myoepithelial cells.

Pleomorphic adenoma is a tumor of variable capsulation characterized microscopically by architectural rather than cellular pleomorphism. Epithelial and modified myoepithelial elements intermingle most commonly with tissue of mucoid, myxoid, or chondroid appearance.3 Synonym: mixed tumor.

Pleomorphic adenoma is the most common salivary gland tumor and accounts for about 70% of all salivary gland neoplasms. The mean age at presentation is 46 years, but cases have been reported at all ages. There is a slight female preponderance. The majority (80%) are located in the parotid gland, 10% in the submandibular gland, and 10% are found in the minor salivary glands—oral cavity, larynx, and pharynx, as well as in the nasal cavity.

Pleomorphic adenomas usually present as slow-growing, painless masses or swellings. The small tumors typically form smooth, mobile, firm lumps, but as they become larger they tend to become more bosselated and may attenuate the overlying skin or mucosa. Pleomorphic adenomas are solitary, but may present synchronously or metachronously with other salivary tumors, particularly Warthin tumor, in the same gland or other glands.4 The size of most tumors varies from about 2 cm to 5 cm, but very large tumors have been reported.

These tumors are well-defined and ovoid or round in shape. They have a capsule of varying thickness, which may be partially or completely absent, particularly in mucoid tumors.5,6 Pleomorphic adenoma tumors located in minor salivary gland sites usually have a poorly developed or absent capsule. The outer surface of larger tumors is bosselated, and histologically these areas demonstrate fingerlike processes extending into the capsule. Occasionally, these projections may bulge through the capsule and form satellite nodules. The epithelial components show a wide range of cell types; this phenomenon has no prognostic significance. A knowledge of the immense variety of cells, architectures, and morphological characteristics present in pleomorphic adenoma of the salivary glands is essential for a correct diagnosis.

Extensive inflammation and necrosis may occasionally be seen, which may follow fine-needle aspiration cytology or occur spontaneously, resulting in a presentation as a cystic lesion. These tumors may have an increase in mitotic figures and some cellular atypia. In addition, squamous metaplasia may be present and the changes may be mistaken for malignancy.

Complete surgical excision is the treatment of choice, and although pleomorphic adenoma is a benign tumor, there is a risk of recurrence, metastases, and malignant transformation.7

The tumor is composed of glandular and often cystic structures, sometimes with a papillary cystic arrangement, lined with a characteristic bilayered epithelium consisting of inner columnar eosinophilic or oncocytic cells surrounded by smaller basal cells. The stroma contains a variable amount of lymphoid tissue with germinal centers. Synonyms: adenolymphoma and papillary cystadenoma lymphomatosum.

Warthin tumor is a benign lesion that accounts for 10%–15% of all epithelial tumors of the major salivary glands, and is the second most common parotid neoplasm (25% of these lesions). It is observed in adult patients, with a male–female ratio varying from 1.6: 1 to 10: 1. Epidemiological studies have demonstrated a strong association between cigarette smoking and Warthin tumor, with smokers being eight times more likely to develop the tumor than nonsmokers, and its frequency has been increasing in the last few decades.8

Warthin tumor almost exclusively involves the parotid gland and periparotid lymph nodes, where it may occur bilaterally (4%–10%), either metachronously (90%) or synchronously (10%), and as multiple lesions within the same gland (13%). It typically presents as a painless, slow-growing mass measuring on average 1–4 cm, although it is reported to vary in size and has a soft, rubbery consistency due to its cystic and solid components.

Histologically, Warthin tumor consists of an oncocytic epithelial cell component arranged in double layers, which lines cysts and papillary projections, and a variably represented lymphoid stroma component. A subset of lesions (5%–7%) shows necrosis, nonkeratinizing squamous metaplasia, and a prominent inflammatory infiltrate, more often as a result of a prior fine-needle aspiration cytology. Several case reports have described an association with facial nerve weakness or paralysis, usually when the swelling has rapidly increased in size.9

Overall, the clinicopathological features of Warthin tumor are unique among salivary gland neoplasms, and this is why it is still a source of controversy in relation to histogenesis and treatment. An association with carcinoma arising from the epithelial components has been reported in a small number of cases,10 and the lymphoid component may transform into a malignant lymphoma of Warthin tumor.

It is generally accepted that the treatment of Warthin tumor is surgical excision, although the extent of parotidectomy remains controversial. Reports have suggested enucleation, partial or selective parotidectomy, and superficial or total parotidectomy as the treatment of choice. Recurrence rates in the range of 0%–25% have been reported with these various treatment modalities. It is considered that the recurrences are due to unrecognized residual multicentric tumors.11 Intraoperative rupture or incomplete excision has not been associated with an increased incidence of recurrence, as with other benign salivary neoplasms. Patients should be investigated to exclude multicentric tumors before surgery, in order to minimize subsequent “recurrences.” Ultrasound or magnetic resonance imaging are more useful than technetium Tc99 m pertechnetate scintigraphy. Surgery should be tailored to the location of the primary presenting lesion, usually the lower pole of the parotid gland.

Differential diagnoses of multilocular benign epithelial tumors of the salivary glands include: