This chapter discusses the natural history of the different types of salivary gland cancer (SGC) and relates this information to the underlying biological processes involved. The indications for cytotoxic chemotherapy are discussed in the context of the published literature on single-agent and combination chemotherapy regimens. The pathophysiology of salivary gland tumors is considered as a basis for discussing the potential for using targeted drugs as therapeutics against this group of tumors. Finally, the results from initial studies of targeted therapies are presented.

Malignant neoplasms of the salivary glands are rare tumors, representing fewer than 5% of all head and neck cancers. The global annual incidence rates vary in the range of 0.05–2 per 100 000. According to the Euro pean Ca ncer Re gistry (EUROCARE) project, which studied survival after diagnosis of cancer of the salivary glands in Europe, the relative survival was 83% at 1 year, 69% at 3 years, and 65% at 5 years. Interestingly, there was a significant difference between survival data for men and women, with 5-year figures of 58% and 72%, respectively.1 The cause of this variation has not yet been adequately explained.

Recent progress in molecular biology has allowed us to identify some of the abnormalities underlying the several histotypes of SGC. Epidermal growth factor receptor (EGFR) is the most commonly expressed tyrosine kinase receptor, occurring in up to 71% of SGCs, and its expression is unequivocal in all malignant histotypes4 (Fig. 31.1). However, there is no clear correlation between EGFR expression and gene amplification analysis. Furthermore, activating mutations within the EGFR tyrosine kinase domain appear to be very rare.5 The prognostic significance of EGFR overexpression remains uncertain at present.6 Overexpression and gene amplification of human epidermal growth factor receptor 2/neu (HER-2/neu) are found in 57%–73% of cases of salivary duct cancer, and both seem to correlate with a poorer prognosis.7–9

Vascular endothelial growth factor (VEGF) is expressed in a significant proportion of SGCs (65%). Multivariate analysis has shown that VEGF expression appears to be one of the most important independent prognostic factors, along with Ki-67 and p53 expression and nodal metastases. High frequencies of p53 and VEGF expression appear to correlate with poorer outcomes in mucoepidermoid carcinomas.10 A high level of c-Kit expression has been identified in more than 90% of adenoid cystic carcinomas, mainly in high-grade tumors and those with a solid histological pattern. However, no mutations were found in the c-Kit gene.11 Androgen receptor expression is rare and mainly restricted to salivary duct cancer and adenocarcinoma.4 Estrogen and progesterone expression is very rare, and it is found both in benign and malignant salivary gland tumors.12 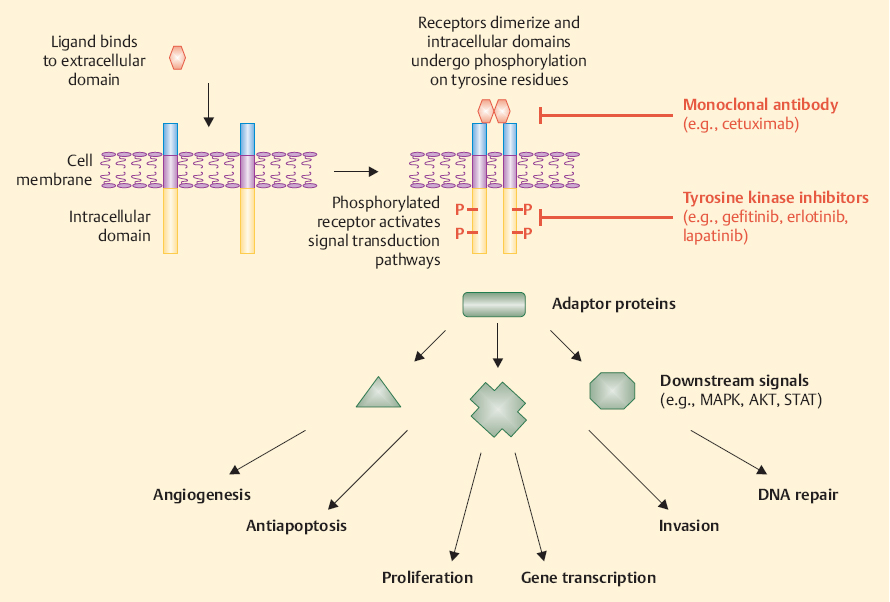 Fig. 31.1 Epidermal growth factor receptor signaling controls es-growth (mitogen-activated protein kinase pathway) and antiaposential biological functions, such as growth, apoptosis, angiogeneptotic signaling (AKT pathway). These signaling pathways can be sis, invasion, and DNA damage repair in cancer cells, including blocked by monoclonal antibodies that target the extracellular do-some salivary gland cancers. Ligand binding to the receptor and sub-main of the receptor, or by small-molecule tyrosine kinase inhibitors sequent receptor dimerization can lead to activation of signal trans-that interact with enzymatic activity in the intracellular part of the duction pathways, which may in turn mediate processes such as cell receptor.

Distant hematogenous metastases are most frequently detected in the lungs (80%), but can also be seen in the bones (15%), liver, and other sites. Adenoid cystic carcinoma, adenocarcinoma not otherwise specified, carcinoma ex pleomorphic adenoma/malignant mixed tumor, small cell carcinoma, and ductal carcinoma are associated with the highest rates of distant metastases.

ACC has a proclivity for neurotropism, enabling it to invade and spread along the perineurial space. This behavior may contribute to the locoregional distribution and metastatic potential of this cancer. There have been suggestions that the different histological patterns of ACC (solid, tubular, and cribriform) are associated with different outcomes, but these apparent differences may disappear with long-term follow-up.

ACC has a long natural history and is characterized by the possibility of late recurrence. Local recurrences have been reported either alone or with distant recurrence. Distant metastases show a particularly slow course, with a median survival of about 3 years, but up to one-third of patients die within 2 years.17,18 Patients with solely pulmonary metastases have a better prognosis in comparison with those with metastases to bone or other viscera.19,20

Adenocarcinomas have a large list of subtypes, ranging from indolent forms such as acinic cell carcinoma and polymorphous low-grade adenocarcinoma to aggressive histologies, such as high-grade adenocarcinoma not otherwise specified. Salivary duct carcinoma arises mainly in the parotid gland and has a marked tendency to nodal involvement. Development of distant metastases is also common, and the median survival from the time of diagnosis is 3 years, with most patients dying as a result of malignancy.44,45

Surgery alone or in combination with postoperative radiotherapy is the mainstay of treatment for localized disease, in which treatment is frequently curative. Surgery and postoperative radiotherapy may even play a role in the management of patients with disseminated disease in whom securing local control may be important before therapeutic options for the metastatic component are considered.

Chemotherapy is reserved for the palliative management of metastatic disease or locoregional recurrence that is not amenable to further surgery or radiation. The relative rarity of SGCs and their histological and prognostic heterogeneity mean that limited data are available from clinical trials to guide the choice of systemic therapies. In addition, patients with metastatic disease are frequently asymptomatic and have relatively indolent disease that progresses over several months or years. Such considerations have a significant bearing on decisions about whether to prescribe cytotoxic chemotherapy, given the fact that such treatment will inevitably cause adverse effects, without any guarantee of a beneficial response.

Many clinicians prefer to keep their patients under observation with repeat imaging investigations every 3–6 months as a means of gauging the rate of change of the disease. If a patient shows rapid progression or becomes symptomatic, chemotherapy can then be started with the twin goals of palliating symptoms and arresting (or reversing) disease growth.

Chemotherapy is reserved for the palliative management of metastatic disease or locoregional recurrence that is not amenable to further surgery or radiation.

Patients with suspected or known metastatic SGC should undergo rigorous medical work-up before any decision is taken on whether to commence cytotoxic chemotherapy. The diagnosis of distant metastatic disease can be confirmed by some or all of the following investigations: plain chest radiography, computed tomography of the chest and abdomen, liver ultrasound, and bone scan. In all patients, it is also important to confirm that there has been no recurrence of disease at the primary site. If there has been a prolonged interval between the initial diagnosis of malignant SGC and the occurrence of metastatic disease, it is prudent to confirm the histological diagnosis by biopsy from an accessible lesion (with comparison against the original histopathological appearance, if possible).

If cytotoxic chemotherapy is contemplated, it is mandatory to conduct baseline assessments of normal organ function. These should include blood tests for hematological functions (full blood count, differential white cell count, clotting screen) and biochemical functions (renal and hepatic function, calcium and alkaline phosphatase as markers of bone disease, serum glucose). In addition, a calculated quantitative estimate (Cockcroft–Gault) or nuclear medicine–based quantitative estimate (ethylenedia-mine tetraacetic acid clearance) of renal excretory function should be performed in patients who are going to receive platinum chemotherapy (see below). Similarly, in patients who are going to receive anthracycline chemotherapy, it is necessary to assess cardiac function with electrocardiography and a baseline echocardiogram.

There is no standard systemic treatment for patients with metastatic SGCs. Chemotherapy continues to be regarded as a palliative therapy and is suitable for individual clinical use, based on level 3 evidence (case–control or cohort studies). The data supporting the use of chemotherapy are poor, mainly because trials tend to involve small numbers of patients who may be quite heterogeneous with regard to histology, the number of prior systemic therapies, and the proportion with distant metastatic disease versus locoregional recurrence. Moreover, the histological classification of SGCs has expanded, particularly with regard to the categorization of adenocarcinoma and its subtypes, and this has resulted in difficulties in determining which tumor type is being described in early publications. More importantly, the majority of salivary gland tumors have a slow growth pattern, making it difficult to assess the response to chemotherapy. Indeed, it is difficult to interpret the significance of disease stabilization in a situation in which disease progression may evolve over a prolonged period of time even in the absence of active treatment.

There have been small phase II trials and case series examining the role of either single-agent chemotherapy or combination chemotherapy in patients with salivary gland cancer. Trials that have been published within the last 20 years are reviewed here (Table 31.1).

Mitoxantrone, vinorelbine, and epirubicin appear to have single-agent activity in ACC, as manifested by objective responses, disease stabilization, and palliation of disease-related symptoms.23–25 Cisplatin has also shown moderate activity, offering a median survival of 14 months in a small trial including the major three histologies.26 Vinorelbine may also offer palliation in high-grade adenocarcinomas with aggressive histologies.24 Paclitaxel did not show any activity in ACC, but it appears to provide some objective responses in both mucoepidermoid carcinoma and adenocarcinoma.27 Gemcitabine proved not to be active in ACC28(Table 31.1).

Because of the poor results in studies of monotherapy, combination regimens have been tested in all the major histotypes of SGC. Cisplatin and anthracycline-based combination regimens, with or without 5-fluorouracil, have shown some activity intermsofobjective responses inall threemajor histotypes. Nonetheless, overall survival rates remain poor and there is no clear indication that palliative chemotherapy achieves improvements in this measure.29–32 A single randomized study compared vinorelbine with a combination of vinorelbine plus cisplatin in patients with all histological subtypes. The authors concluded that the combination was better than the single-agent therapy, but the fact that the response rates had wide, overlapping confidence intervals means that this conclusion must be regarded as questionable.24 A combination of carboplatin and paclitaxel has shown a moderate level of activity, with a median survival of 12.5 months when tested in 14 patients with SGCs33 (Table 31.2).

It is therefore still uncertain whether or not combination chemotherapy is better than monotherapy. Although the trials that have been reported are small and inadequately powered to allow investigators to report results with statistical confidence, the main predictor of the response to chemotherapy appears to be the histological subtype of tumor.

As a general rule of thumb, patients with ACC, adenocarcinoma, and malignant mixed tumors have greater sensitivity to anthracycline–platinum combinations, while those with mucoepidermoid and undifferentiated cancers respond better to drugs used for squamous cell carcinoma of the head and neck, such as cisplatin, 5-fluorouracil, and methotrexate.