Fig. 1.1
Electromagnetic spectrum
When patients undergo examinations involving the use of X-rays, billions of photons pass through their bodies. These can damage any molecule by ionisation, but damage to the DNA in the chromosomes is of paramount importance. Most DNA damage is repaired immediately, but occasionally a portion of a chromosome may be permanently altered (a mutation). This may lead ultimately to the formation of a tumour. The latent period between exposure to X-rays and the clinical diagnosis of a tumour may be many years.
The effects described above are believed to have no real threshold and they can be considered as casual (i.e., stochastic) effects, in which the magnitude of the risk, though not the severity of the effect, is proportional to the radiation dose. There are other known damaging effects of radiation, such as cataract formation, skin erythema and effects on fertility, which definitely have threshold doses below which they will not occur. These threshold doses vary in size, but all are of a magnitude far greater than those administered in dental imaging. Thus, except in extraordinary circumstances, these deterministic effects are given no further consideration.
The “dose” may be measured for particular tissues or organs (e.g. skin, eye, bone marrow) or for the whole body, while “exposure” usually refers to equipment technical parameters. In this book, however, radiation dose is expressed as the effective dose, measured in units of energy absorption per unit mass (joules/kg) called the Sievert (more usually the microSievert, μSv, representing one millionth of a Sievert). Effective dose is calculated for any X-ray technique by measuring the energy absorption in a number of “key” organs/tissues in the body (Fig. 1.2).

Fig. 1.2
Tissue weighting factor for absorbed energy
All examinations involving the use of ionizing radiations must be justified on an individual basis by demonstrating that the potential benefits to the patient outweigh the potential risks. A detailed record of the justification process must be maintained for each patient. The use of most imaging examinations involving ionizing radiations—and CBCT in particular—should be carefully weighted before being performed. In this setting, routine or screening imaging is unacceptable.
When referring a patient for CBCT examination, the dentist must supply sufficient clinical information (results of a history and clinical examination) to justify the CBCT to be performed.
CBCT delivered markedly lower doses than did MSCT; compared with OPT, the effective dose was approximately twice as high (0.11 mSv).
The absorbed dose is a physical quantity defined as the amount of energy per unit mass absorbed by a tissue as a result of exposure to radiation; the absorbed dose is measured in gray (symbol Gy) in the International System, where 1 Gy is 1 J of radiation absorbed by 1 kg of mass.
Organ doses were all higher, in fact the salivary glands adsorb a dose ranging from 1.35 to 1.78 mGy; the higher dose delivered by OPT—ranging from 2.01 to 2.57 mGy—is due to the fact that the salivary glands are included in the primary beam (Table 1.1).
Table 1.1
Examination methods and effective doses
In summary, the radiation doses (and hence risks) from dental CBCT are generally higher than conventional dental radiography (intraoral and panoramic) but lower than MSCT scans of the dental area.

CBCT is rapidly becoming the standard in 3D dental imaging.
First generation CBCT was first used in 1982 (Mayo Clinic Biodynamics Research Laboratory) to perform angiography. Hence, CBCT system was extended to other medical section, finding its best application in dentistry and maxilla-facial region study.
Although the CBCT principle has been in use for almost 2 decades, only recently—with the development of inexpensive x-ray tubes, high-quality detector systems and powerful personal computers—have affordable systems become commercially available.
CBCT is a compact, faster and safer version of conventional CT. Using a cone-shaped X-ray beam, the size of the scanner, radiation dosage and time needed for scanning are all dramatically reduced.
CBCT scanners are systems that are able to provide 3D reconstructions that are based on the reformat of 2D images. The scan is performed with a single 360° scan in which the x-ray source and a reciprocating area detector synchronously move around the patient’s head, which is stabilized by a head holder (Fig. 1.3). 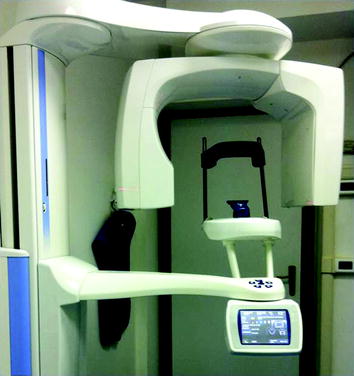 Fig. 1.3
Cone beam CT
At certain degree intervals, single projection images, known as “basis” images, are acquired. These are similar to lateral cephalometric radiographic images, each slightly offset from one another. This series basis projection images is referred to as the projection data.
Dental CBCT units are equipped with digital detectors, which are able to capture x-rays that crossed the patient and to form the image. Spatial and contrast resolution are important aspects of CBCT detectors which influence image quality.
Two types of digital detectors have been used for dental CBCT units. The first type involves conventional image intensifiers (IIs). They consist of an input window, input phosphor, photocathode, vacuum and electron optics, output phosphor and output window. The input phosphor converts the X-rays to optical photons, which then are converted to electrons within the photocathode. The electrons are accelerated and focused by a series of electrodes and then strike the output phosphor which converts the electrons to light photons which are then captured by various imaging devices. Most modern IIs have cesium iodide as the input phosphor because it is a very efficient material in absorbing X-rays. Substantial advantages are low cost, good sensitivity and wide surface; disadvantages are high weight and mass, need of geometric calibration, and the fact that they can be influenced by magnetic field.
Only gold members can continue reading. Log In or Register to continue