For morphologic (anatomical) purposes, the following main stages of dentition are significant (Thoma 1953):
During the second dentition stage, between the age of 6 and 12 years, determination of age should not be based on only the eruption of permanent teeth. The progress of resorption of deciduous tooth roots up to the total loss and the progressive formation and calcification of the roots of the permanent teeth are helpful features and are displayed on the radiograph.

19.1.2 ad 2: Determination of Racemization of Aspartic Acid in Dentin

The aging phenomenon of intravital racemization of aspartic acid in human proteins was first described in the 1970s. Since then, the level of racemization of aspartic acid is used to determine the age of fossil materials (Pfeiffer et al. 1995). The racemization of aspartic acid in dentin is, compared with other methods, a very accurate measure for age estimation.
Like all amino acids, aspartic acid may occur in two forms: in a l-and in a d-form. In the biosynthesis of human proteins, exclusively l-amino acids are used. From the time of protein synthesis, a spontaneous, non-enzymatic conversion of l-aspartic acid residues into their d-form may occur. This in vivo racemization may lead to an age-dependent accumulation of d-aspartic acids in long-living, “aging” proteins, if they cannot be replaced after synthesis (they are permanent) (Ritz-Timme 1999). With advancing age, this accumulation is observed in bradytrophic tissues and gives objective information about the age of a person (Pfeiffer et al. 1995). In this respect, dentin tissue is the optimal tissue with its extremely bradytrophic metabolism and a relatively homogeneous and stable anatomic and biochemical structure. In forensic practice, the analysis of dentin is the standard method for biochemical age estimation (Ritz et al. 1990; Pfeiffer et al. 1995; Ritz-Timme 1999), because dentin analysis yields a wide range of basic data at a reasonable cost and has the advantage that it can also be used in examination of living persons (the examination of other kinds of tissues is reserved for special cases). In Germany, age estimation in living persons by this method was not applied until 1995 (Ritz et al. 1995). The main application is the adult age (Ritz-Timme 1999).

Dentin extraction is permitted only with active consent of the person, namely:
Otherwise, dentin biopsy will be performed. Dentin biopsy is legitimized in legal and social indications (Ritz and Kaatsch 1996). The testing laboratories must meet minimum requirements. A postmortem age estimation by the level of racemization of aspartic acid is possible with good results, because of a close relationship between the level of racemization and the age of root dentin, especially if a majority of coronal dentin is missing (Ritz et al. 1993a, b).

According to § 24 RöV, a radiological investigation is permissible only if medically indicated and, according to § 81a STPO, permitted only by judicial decision. Following the principle of proportionality, a radiological investigation in suspected criminal offense (§ 81a STOP) may be performed by force, in contrast to asylum procedure, where empowerment is not given.
In this context, the dental panoramic radiograph (OPG) is based on the following technical parameters (Vendura et al. 1998):
Events, methods, and legal aspects of age estimation according to Ritz and Kaatsch (1996) are given in Table 19.2.
Table 19.2
Age estimation in living persons
Methods and legal aspects (Ritz and Kaatsch 1996)
In cases of suspicion of an obvious abuse, whether the suspect is older or younger than 16 years (if no other data is available) is important, and thus an investigation for age estimation is legally admitted. The legal occasions for age estimation of living individuals are usually for criminal, administrative, civil, and social issues (Ritz and Kaatsch 1996):
Criminal law
Administrative Law
Civil Law
Social Law 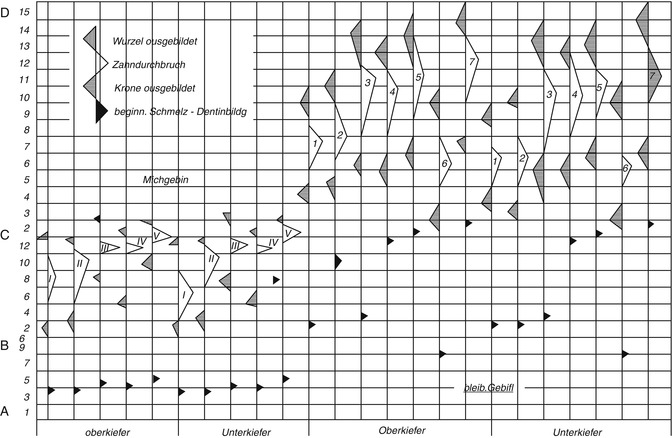 Fig. 19.1
Stages of the teeth of the dentition (Gustafson 1947, 1950, 1955); Chronology of tooth development. Explanation: A1-9: embryonal months, B2-12: months of the first year, C2-day: 2–15; age (I–V: milk teeth) (1–7: permanent teeth – without wisdom tooth) (Courtesy of Prof. Dr. Gösta Gustafson, Lund)
Every stage of the eruption is declared (the tip of the triangle corresponds to the average), and the largest variation is also declared (the legs of the triangle point to the respective time limit of the eruption). Gender differences are not taken into account.
Many forensic odontologists use the scheme (Figs. 19.2 and 19.3) developed by Schour and Massler (1958) and varied by Ferembach et al. (1979). The fact that the data originated from children who have died from diseases is not considered here. For this reason, the table of the chronology of dental development and tooth growth by Schour and Massler (1940) is of limited suitability (Rötzscher and Reimann 1975). Gender differences are also not included. The schemes are based on the work of Logan and Kronfield (1933) and are often quoted. The American Dental Association (ADA) periodically updates and publishes this table. 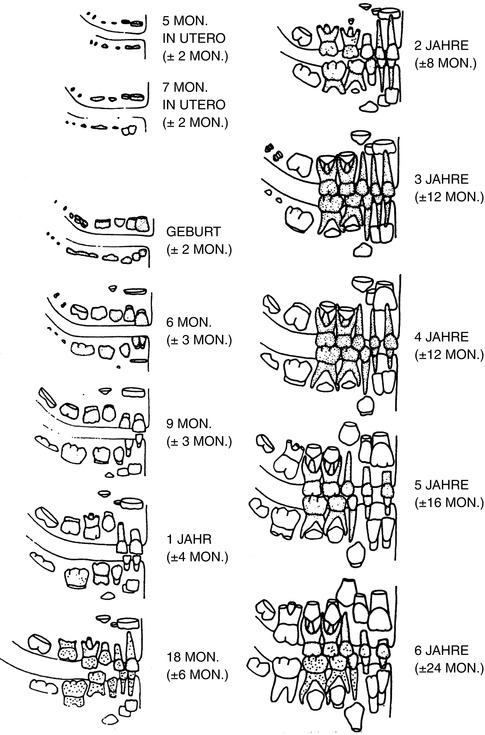 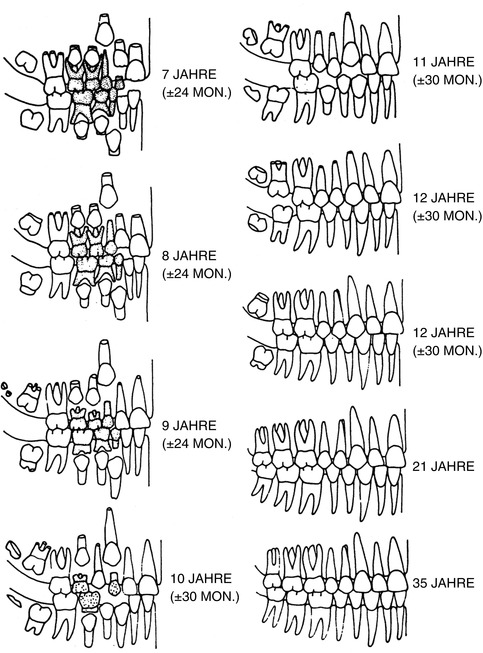 In contrast to the deciduous tooth eruption, the eruption of the permanent dentition extends over a time period that is much longer with many more irregular intervals. In addition, the eruptions have considerable fluctuations, especially the last erupting teeth (Künzel 1976).
Figure 19.4 shows the variability of age groups where certain stages of development are reached (Moorrees et al. 1963). Average ages with a single (+1) and double (+2) standard deviation (s) are shown, in which the complete crown formation (Kk), certain fractions of the root length (1/4, 1/3, 1/2, 2/3, 3/4), total root length (Wx), and the apex half or full circuit (A1/2 k) of the permanent upper and lower central (I1) and lateral (I2) incisors are achieved (black symbols and lines = boys, red = girls) (Moorrees et al. 1963). 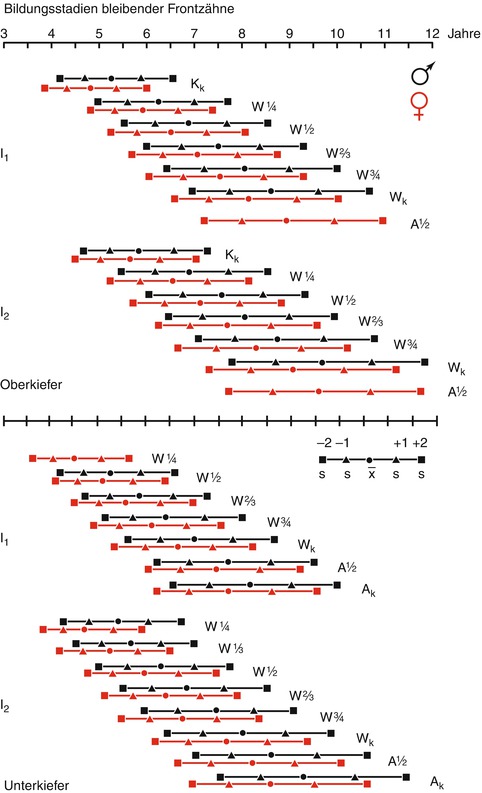 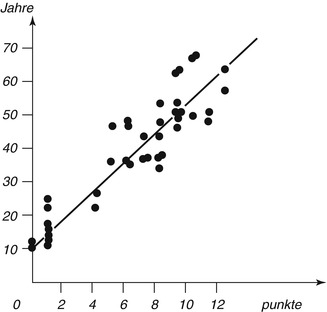 Fig. 19.6
The regression line between observed values is marked 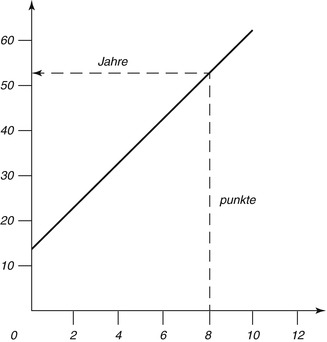 Fig. 19.7
The regression line to determine the age of an unknown
1.
A = attrition (abrasio dentis)
2.
S = residue of secondary dentin in the pulp chamber
3.
P = periodontal shrinkage
4.
Z = cement residue
5.
R = cement and dentin resorption
6.
T = root transparency
The changes are microscopically examined on thin sections of slides embedded in canada balsam. The strength of each change is divided into four stages (0–3). Points are dependent on the degree of change, and adding all points of a tooth results in the sum of the changes (An + Pn + Zn + Sn + Rn + Tn = total). The relation between scores and age is expressed by a line (chart). The calculated formula is: age = 4.56x + 11.43. The correlation with age is 0.91 (Maples and Rice 1979).
The accuracy of the determination is increased if two or more teeth are available. Then the average of the teeth is used as a total. The Gustafson method has the advantage that it evaluates several features, in comparison with a single feature, which is more error prone. Although several improvements have been published, e.g., in the USA, many forensic odontologists still use the original method. Thus, the Gustafson method was applied for many years as the method of choice by many forensic odontologists.
Nevertheless, this method is criticized (Schmeling et al. 1999a, b):
The examined material of 40 teeth of different individuals (Gustafson 1947, 1950, 1955) is a relatively small selection and it may be possible that some teeth are from the same individual, as in other investigations (Burns and Maples 1976; Johanson 1971; Lode and Reimann 1985).
Because the variability of age-related changes in the teeth from the same individual is apparently less than in teeth of different individuals, this can contribute to a more favorable standard deviation.
Gustafson (1947, 1950, 1955) developed a single formula that should be valid for all groups of teeth. However, it must be considered that age-related changes can lead to different results (Maples 1978; Schulze 1982) as much as tooth position (Schulze 1982), or a formula separately calculated for each tooth type (Bang and Ramm 1970; Schulze 1982). The regression formula by Gustafson was incorrect. Later it was amended to: age = 13.45x + 4.26 and the correlation between estimated and actual age r = 0.912 (Maples and Rice 1979). Nevertheless, it is not appropriate to skip Gustafson’s method and not to mention its results.
Biedow (1963) modified the Gustafson method by assessment of one-sided cut teeth under the stereomicroscope with the same scoring as Gustafson. It is recommended that X-rays be obtained before grinding in order to avoid errors in the assessment of regressive changes, because not every root canal is straight.
The front teeth are particularly useful. Further improvements with seven stages and multiple regressions were added (Johanson 1971). Maples (1978) included a correction factor for the tooth type.
Bang and Ramm (1970
Only gold members can continue reading. Log In or Register to continue