The human bite has a bilaterally symmetrical arrangement. Thus, the number of teeth in one jaw is 16, for both jaws it is 32 (in permanent dentition), with the formula:

Because there are no molars in primary teeth, (as in permanent teeth) the number of teeth for both jaws is 20, with the formula:

The posterior arising of the three molars of permanent dentition (M1, M2, and M3) is called growth teeth. Their tooth germs develop from the blind end of the dental lamina of the deciduous molars, which distally extends itself by proliferative growth (Schroeder 1987).
Human dentition is thecodont; the teeth are fitted with roots that anchor themselves in the jaw. The visible part of the tooth is the crown (corona dentis) and the invisible part is stuck in the jaw (radix dentis). The passage between crown and root is the tooth neck (collum dentis). The crown is covered by tooth enamel (enamelum dentis), the hardest substance in the human body (~95 % inorganic substance) (Fig. 17.2). 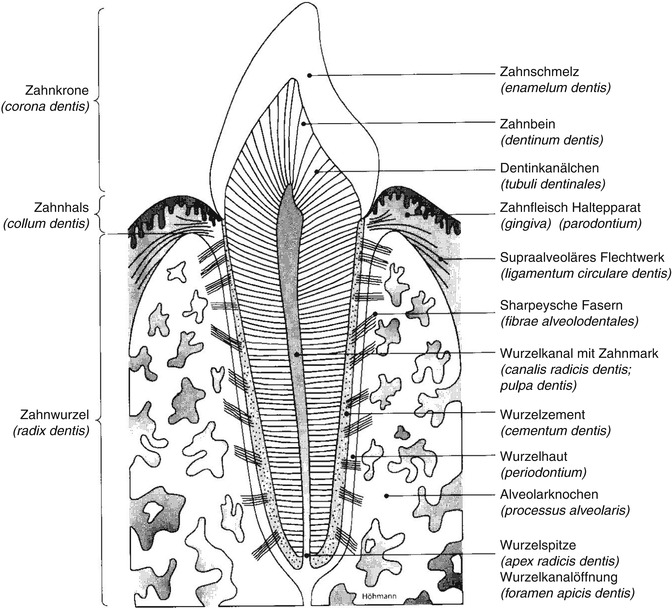 Fig. 17.2
Tooth structure (Drawing Dr. med. dent. B. Höhmann, Munster-Westfalia)
The root is completely surrounded by the dental cement (cementum dentis) and contains the dentin (dentinum dentis, substantia eburnea). The dentin is quantitatively the largest amount of the dental hard tissue. The interior of the dentin is a cavity filled with the pulpa dentis (cavum dentis). The dentin is formed by the odontoblasts, which radially run from the pulp to the dentinal tubules (dentinal canaliculi). The pulp proceeds with one or more root canals (canalis radicis dentis) past the root apex (apex radicis dentis) and ends with an opening (foramen apicis dentis) in the depth of a tooth socket (alveolus). All alveoli are located in the teeth-bearing part of the jaw, the alveolar process. The structure of the human thecodont dentition requires the structures parodontium.

Lamentably, dental terms are not internationally uniform. Thus, it remains necessary to decipher dental records before they can be evaluated (Alt and Türp 1998).
A dental notation system was created by university professors at the beginning of twentieth century (Zsigmondy 1861, 1874 or Haderup 1887 with his dental shorthand nomenclature). Frykholm and Lysell (1962) have detected that more than 32 different systems for the notation of teeth are in use worldwide. Several common notation systems are used, including Palmer’s Notation (1870, 1891), Cunningham’s Universal Notation (see also Parreidt 1882), Bosworth (Fig. 17.3), and the Two-Digit System of the Fédération Dentaire Internationale (FDI) (Goodman 1967; Dorion 1991; Ortiz 1995). 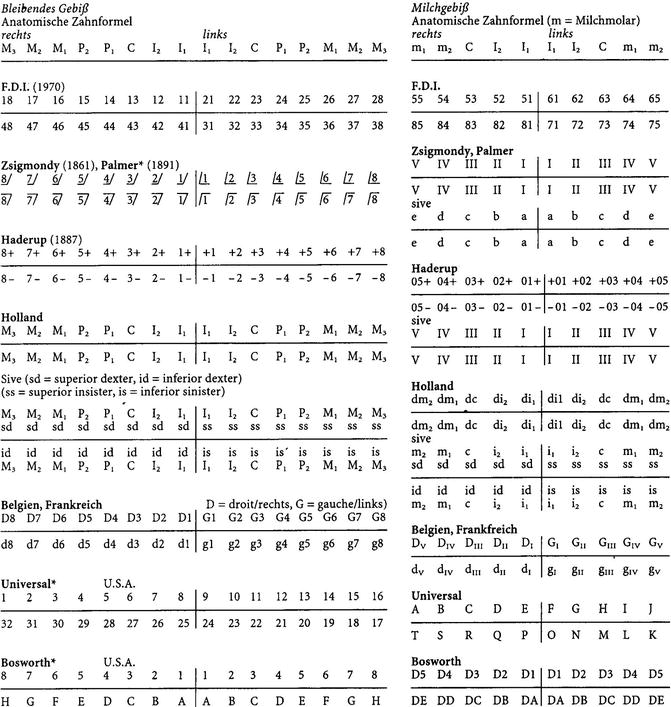 Fig. 17.3
Various dental notation systems (Dorion 1991; Frykholm and Lysell 1962)
In the current international literature, the four-quadrant method (tooth schema), a two-digit system proposed by Piquet in 1924, is used (Keiser-Nielsen 1971). In 1970, the Working Group for Forensic Odontology (WG/FO) of the Fédération Dentaire Internationale (FDI) varied this system (FDI WORLD 1995).
The FDI Two-Digit System (Fig. 17.4) was adopted in 1955 by the American Dental Association (ADA) and its Commission of Dental Accreditation as an official equivalent of the current universal system (Peck and Peck 1993). The FDI Two-Digit System is also accepted by the International Organization for Standardization (ISO 3950) (1984, 1995), the International Association for Dental Research (IADR), and the World Health Organization (WHO) (1977, 1987), and is used by INTERPOL (1989). For global cooperation, it is recommended that the FDI Two-Digit System be used (Rötzscher 1992a, 1992b, 1994). 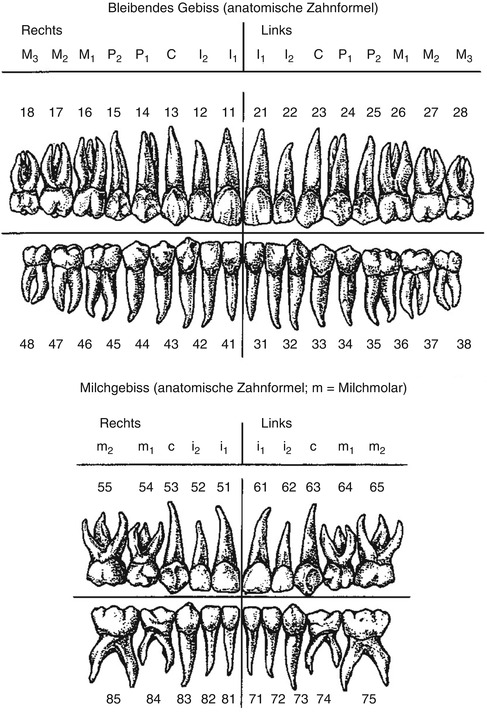 Fig. 17.4
The Two-Digit System; the four-quadrant method (schematic anatomical diagram) (Schumacher 1984)
The first digit of the Two-Digit System identifies the four quadrants of the jaw, clockwise, as 1 = right upper jaw, 2 = left upper jaw, 3 = lower left jaw, 4 = lower right jaw. The second number refers to the teeth (1–8) in each quadrant, counted from the centerline (Schumacher 1984). In the primary dentition, the first digit (5–8) analogy names the quadrant of the jaw, the second number the teeth (1–5) in each quadrant.
Semi-anatomical (Fig. 17.5) or geometric (Fig. 17.6) diagrams without descriptions of root are suitable for rough orientation, but are not recommended for detailed information. Therefore, the German Academy of Forensic Odontostomatology recommends an anatomic diagram (Rötzscher et al. 1999), where the changes in the root zone (diseases, treatments, remaining root fragments, etc.) can also be recorded (Figs. 17.7 and 17.8). 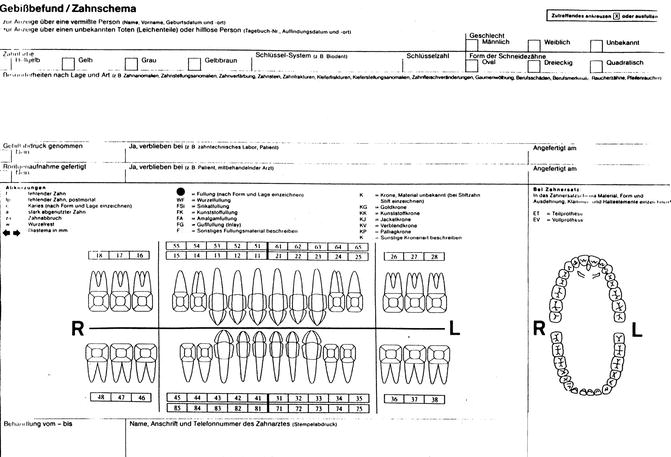 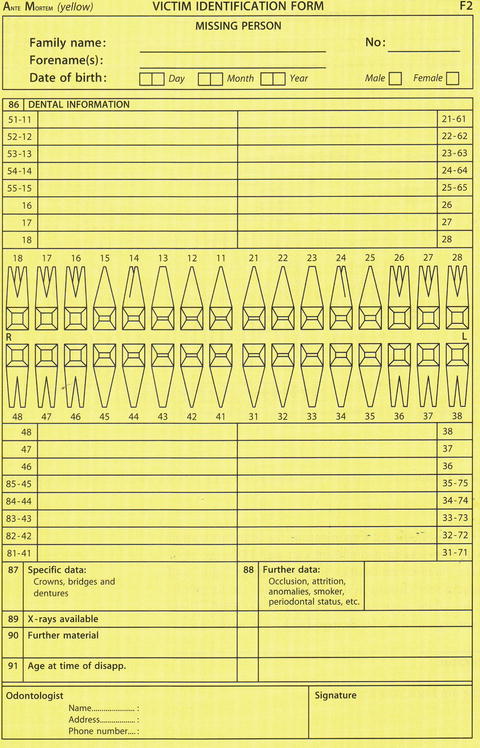 Fig. 17.8
Geometric diagram (with root description) INTERPOL DVI form F2. Form of dental identification (Designed by Dr. med. dent. B. Höhman, Munster-Westfalia)
The International Organization for Standardization (ISO) developed a revised version of dentistry (notation system for teeth and regions of the oral cavity)—two-digit tooth and field names of the oral cavity in continuity with the existing system (ISO 3950). This standard completes the FDI system (FDI World 1995). The names of the teeth and areas of the oral cavity (ISO 3950) are shown in Figs. 17.9 and 17.10) 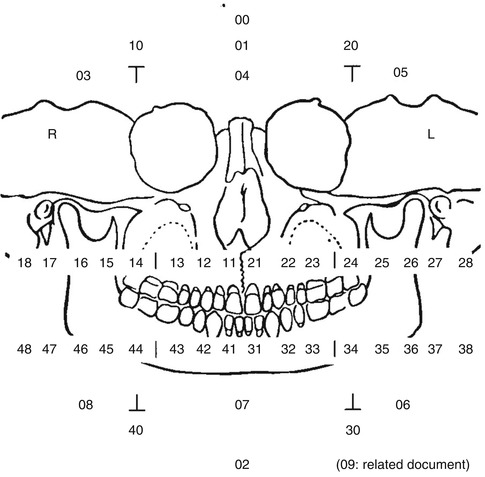 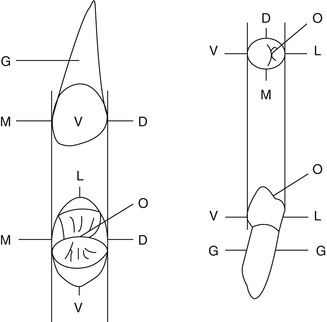 The individuality of the teeth is based on many points of comparison (variables) of the 20 or 32 teeth (position anomalies and malformations); each tooth has five anatomical regions. For full dentition, the calculated possible restoration conditions are 3.8 × 104 (Hausmann et al. 1997). The higher the number of quantitative and qualitative points of comparison, the more reliable is the comparison. Computer models have shown that there are greater than 2.5 billion variations (Fiala 1968; Sopher 1986).
Individual characteristic structures are already formed in the enamel and dentin during tooth formation (by layer formation of dental hard tissues). During the prenatal and especially during the postnatal phase of dental development, every individual passes through more or less numerous and intense disease processes that interfere with dental development (birth trauma, childhood diseases) and that leave characteristic lines in the enamel and dentin.
These lines run along the growth layers of the tooth:
These lines are broadened by disturbances. Because several types of teeth (groups) are formed at the same time (at the same side in the upper and lower jaw) and because the temporal rhythm of growth disturbances differs from person to person, but is equal for all teeth of an individual, whether two teeth are from the same individual or not can be deduced (Schroeder 1971).
The presence of individual characteristics is duplicated by dental treatment measures, such as conservative dentistry by cavity preparation and the type of filling material (Figs. 17.11 and 17.12
Only gold members can continue reading. Log In or Register to continue