9. Why Can’t I Have Lots of Sets of Teeth Like a Shark?

Why Can’t I Have Lots of Sets of Teeth Like a Shark?

When a child’s milk tooth drops out, it is put under the pillow overnight for parents to substitute money on behalf of the tooth fairy. It must be quite expensive for the poor tooth fairy, but she is lucky the child is not a shark, as that would cost her a whole lot more, because sharks have many more teeth than humans, which are shed and replaced continuously throughout their lives. Why can’t we have lots of sets of teeth, like a shark? Although this might seem a wonderful idea to people who have lost teeth to decay or gum disease, it really isn’t.

The reason why the teeth of fish, amphibians and reptiles are continuously replaced is that these animals grow throughout life, and the size of their teeth has to keep pace with their growing jaws. Small teeth may be fine for a small shark but would be of little use when it has grown into a large one. The main differences between the teeth of these types of animals and those of humans have been mentioned in Chapter 4 (page 55). Humans have teeth with different and more complex shapes, including broad (molar) teeth that occlude and grind up the food to gain quicker access to its energy. This requires careful positioning of the teeth and hence roots are fixed to the jaw by a very slightly mobile fibrous joint. Grinding also calls for a wider range of jaw movements carried out by a more complex muscle system, compared with the simpler opening and closing movements found in the non-mammalian vertebrates. Because of these features, mammals have evolved a different solution to the problem of increasing size compared with sharks.

The teeth of sharks and other non-mammalian vertebrates (fish, amphibians and reptiles) have a simple shape and do not have roots. The teeth in opposing jaws do not meet, so that rarely can the food be cut up or crushed into smaller pieces. The function of the teeth is merely to help grip the food and stop it escaping before swallowing it whole.

To maintain the right size of tooth for the enlarging jaws, tooth replacement is continuous throughout life, with each new set being slightly larger than the previous one. In addition to increased size, the number of teeth may also increase with age. The concept of continuous replacement can be confirmed by looking at any adult animal, where there will always be one or two sets of replacing teeth present underneath the gums regardless of age (see Figure 4.15). In humans, no replacing teeth will be present after about the age of 12 years.

The easiest way of demonstrating the presence of numerous sets of teeth is to look at the jaws of a shark. The shark is exceptional in that in addition to one or more sets of teeth in function in the mouth, up to 10 further sets of replacing teeth at successively younger stages of development may be present beneath the lining of the mouth (Figure 9.1). 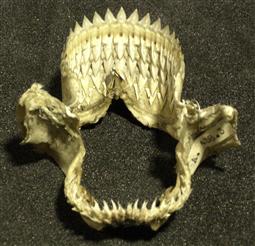 Figure 9.1 Jaw of kitefin shark (Dalatias family). The teeth in the upper half of the image are from the lower jaw and are blade-like and locked together. Beneath the functioning set, four or five replacing sets of teeth are evident. In life there would have been more but, as these are less well developed, they are lost during preparation of the specimen. The teeth in the lower part of the image are from the upper jaw and are more conical in shape.

Source: Courtesy of the Hunterian Museum at the Royal College of Surgeons. Photographed by M. Farrell.

In young sharks, teeth are replaced every 2–4 weeks. The belief that tooth replacement occurs to compensate for the wear and blunting of teeth is incorrect, as little or no tooth wear occurs during the relatively short time the teeth are in function. To confirm this assumption, if a shark is deprived of food, tooth replacement still occurs at the normal rate.

It is possible to estimate the total number of tooth replacements throughout life by measuring the width of a tooth and that of the slightly larger replacing one beneath it in a series of skulls ranging from very young to very old and relating it to jaw growth using a mathematical formula (Strasborg plot). In the piranha (see Chapter 1, page 8–9) nearly 30 sets of teeth are produced during its lifetime. In the Nile crocodile, up to 50 replacements occur at each tooth position during its long life.

Tooth replacement patterns have been studied in living nurse sharks on a weekly basis for 3 years. The functional teeth were marked regularly to identify them. It was seen that rows of teeth were replaced every 10–20 days in the warmer summer months, but slowed to 50–70 days in the colder winter months. If these rates are extrapolated over the life of the animal, the number of tooth replacements is far larger than the 50 sets reported for the Nile crocodile.

In the case of sharks, therefore, literally thousands of teeth are produced over a 10–15-year lifespan, yet most show little sign of wear before being replaced. This may seem a very wasteful and inefficient system, especially when considering the largest known fossil shark, Megalodon, whose massive teeth could reach a length of 15 cm in (Figures 9.2 and 9.3). However, it must be kept in mind that sharks are a hugely successful species, having been around for hundreds of millions of years in more or less the same basic form, so it can’t be that much of a handicap to a shark to replace them so rapidly. Some sharks have been observed to ingest exfoliated teeth, perhaps nature’s way of reutilising the calcium and phosphates in them. 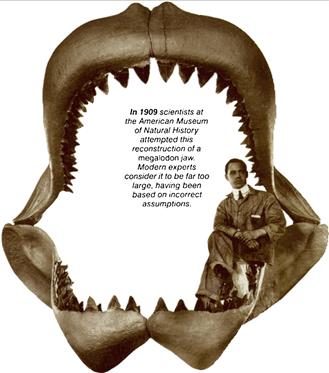 Figure 9.2 Photograph of Megalodon from the American Museum of Natural History. This early reconstruction is now agreed to have made Megalodon considerably larger than it really was. Man sitting on Carcharodon megalodon jaws. Pre-1923. 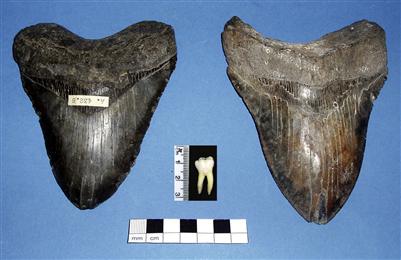 Figure 9.3 Two teeth of Megalodon with a human molar tooth for comparison.

As the teeth of non-mammalian vertebrates enlarge with age, they are retained for progressively longer periods, so that the rate of tooth replacement slows down with age. Whereas in a young piranha, lizard or crocodile, a tooth may function in the mouth for a period of weeks, in older individuals it lasts for months.

Although in sharks many adjacent teeth are shed at the same time, the underlying replacing teeth erupt very quickly so that there is little interruption to feeding. In the majority of non-mammalian vertebrates, as typified by lizards, there may be a delay of a few weeks between the shedding of one tooth and its replacement by another. At any one time gaps will be present in the jaws, as typified by a lizard such as an iguana (Figure 9.4). If a number of adjacent teeth were shed at the same time, then that part of the jaw may be inefficient during food gathering. However, this situation is rarely encountered, as the majority of teeth are always present in the mouth with just a few isolated gaps here and there, beneath which replacing teeth are preparing to erupt. The question arises as to whether this observation is the result of chance or whether there is some additional mechanism involved. 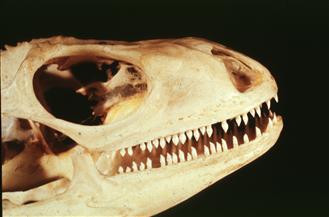 Figure 9.4 Skull of iguana. The teeth all have the same somewhat conical shape. At any one time, it is common to have a few teeth missing, with gaps that will be replaced by newly erupted teeth. Note, however, that in this skull no two adjacent teeth are missing.

If you are good at solving puzzles, then look at Figure 9.5. It is a model of a real lizard jaw showing the teeth that have erupted as well as the replacing teeth lying beneath. Only three gaps are evident in the 24 tooth positions, namely positions 7, 14 and 19, where teeth have dropped out but have not yet been replaced. The replacing teeth within this jaw are at varying stages of development; some are very small, having just started to develop (tooth positions 6, 8, 15), while others are larger and therefore older and more advanced, and will soon erupt (tooth positions 7, 14, 19 and 22). Can you identify any orderly pattern in which the replacing teeth will erupt?

Figure 9.5 Lower jaw of green lizard. Notice the gaps (arrows) where teeth have dropped out and the replacing teeth underneath will soon erupt. Also notice that beneath each erupted functional tooth are small, developing replacing teeth at varying stages of development.

There does not immediately appear to be any obvious pattern whereby the functional teeth are replaced when looking at the model in terms of adjacent teeth. However, if alternate teeth are examined, a pattern does emerge (Figure 9.6). Focusing first on, say, tooth position 16 (arrow), this tooth has just erupted and there is no sign yet of a replacing tooth beneath it. Moving forwards through tooth positions 14, 12, 10, 8 and 6, the replacing teeth are at progressively younger stages of development. It can be assumed, therefore, that these teeth will erupt from back to front in this alternate sequence (Figure 9.6, line 2). Similar alternate ways of replacement will affect all the teeth, some passing through the even-numbered teeth (Figure 9.6, lines 2 and 4), others passing through the odd-numbered teeth (Figure 9.6, lines 1 and 3). Depending on the speed of replacement, only one tooth in any wave is likely to be missing at any one time. As the waves affecting the odd- and even-numbered tooth positions are out of synchrony, whenever a tooth is being replaced and there is a temporary gap, let us say in an even-numbered tooth, the adjacent teeth in the odd-numbered series will be present and functioning. In summary, this will mean that no groups of adjacent teeth will be missing at the same time.

These conclusions on tooth replacement patterns were derived on a theoretical basis simply from examining skulls. However, longitudinal studies have been carried out in living animals whereby the teeth present have been recorded in the same animals for periods of over a year using techniques such as taking wax impressions (for trout and lizards) or radiographs (for alligators). These studi/>

Tags: Nothing but the Tooth A Dental Odyssey
Jan 5, 2015 | Posted by mrzezo in General Dentistry | Comments Off on 9. Why Can’t I Have Lots of Sets of Teeth Like a Shark?
Premium Wordpress Themes by UFO Themes
WordPress theme by UFO themes