13. Why Should It Matter How Long Our Ancestors’ Teeth Took To Develop?

Why Should It Matter How Long Our Ancestors’ Teeth Took To Develop?

Soon after taking up my first teaching appointment at the University of Bristol in 1966, I decided to attend an evening lecture on the ‘Evolution of Man’ by Dr Louis Leakey. At the time I did not know who Leakey was. As the lecture theatre was capable of seating 400 people, I did not feel the need to get there early and turned up 5 min beforehand, anticipating ample empty seats. To my surprise, it was ‘standing room only’, and I was uncomfortably crouched on the floor of the aisle, alongside numerous others.

I was enthraled as slides of Olduvai Gorge in the Rift Valley of Kenya and Tanzania were shown, followed by a dramatic account of how early humans first evolved in Africa. Images of the fossilised skulls of two new species of our ancestors that Leakey and his wife, Mary, had recently unearthed created even more excitement. The more primitive and robust one, because of its large grinding teeth, had been nicknamed ‘Nutcracker man’ (see Figure 7.3A) and given the scientific name of Zinjanthropus boisei (Zinj=East African region of Zanj, anthropus=ape or ape-human, boisei=Charles Boise, who financed the expedition). It was assumed at the time that these teeth had been adapted to chew a tough diet of nuts and seeds (however, see Chapter 7, page 104). The second, less robust (gracile) fossil with a comparatively larger braincase and more human-like teeth was called Homo habilis (handy man). This name was given because it was thought that Homo habilis had made the flint tools found nearby and was thus the earliest tool-making human ancestor. These discoveries and the fact that the fossils were about 2 million years old had created headlines worldwide. The climax of the lecture came at the end, when Leakey dramatically unveiled casts of the two fossils (Figure 13.1). 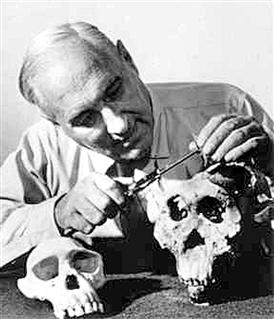 Source: en.wikipedia.org/wiki/File:Louis_Leakey.jpg. This image is a work of a Bureau of Land Management* employee, taken or made during the course of an employee’s official duties. As a work of the U.S. federal government, the image is in the public domain.

Humans belong to a zoological family called the Hominidae that includes the living great apes (orangutans, chimpanzees and gorillas). Within this family, there is a subgroup that habitually walked on two feet (bipedal). Modern humans as well as all the fossil species that were bipedal (such as Homo erectus, Australopithecus and even earlier species) belong to this group. They are referred to collectively as hominins.

Up to the time of Leakey’s discoveries, few early fossil hominins had been found, and those that had were mainly recent (up to 500,000 years old) and very close relatives of modern humans, such as Neanderthals in Europe and Homo erectus in China and Java. Up to 1953, the specimens also included the remains of Piltdown man (which is discussed further in Chapter 12, page 167). The specimens that Leakey had unearthed were much older and had more ape-like features. Subsequently, Leakey, his wife, Mary, and their family (particularly their son Richard and daughter-in-law Maeve Leakey) were, and some still are, discovering a whole series of very early fossils extending back over 4 million years. Such discoveries have revolutionised our understanding of the evolution of modern humans.

What was apparent to me from the lecture was just how necessary a detailed knowledge of teeth was to the study of human evolution. Being composed of the hardest biological tissues, teeth are the structures most likely to be preserved in the fossil record (see also Chapter 7). Indeed, some hominin fossils are only known through isolated teeth. Not only is the general shape of teeth important but also the detailed structure of the enamel has provided information pertinent to evolution as it may have characteristics related to thickness and structure that are specific to a particular species. For these reasons, members of the dental profession have made major contributions to the study of the evolution of man.

Research indicates that modern humans and living great apes evolved from a common ancestor in Africa. The orangutan split off first around 12 million years ago, while the gorilla and chimpanzee split off later, about 10 and 7 million years ago respectively. The closeness of man to the chimpanzee is reflected in the fact that their genetic material only differs by 2%. The major differences between the living great apes and modern humans are the result of them having evolved separately for millions of years. As we go back to about 6 or 7 million years ago, the common ancestor to chimpanzees and the human line would have had primitive features from which both groups evolved. Such an ancestor would have had ape-like body proportions, ape-like teeth with prominent canines and a small brain and would not have walked upright. Over the next 6 million years in the line leading to modern humans, the dentition became more human with smaller canines, the gait became bipedal (habitually walking on two legs instead of on all fours) and the brain enlarged.

At one time, it was thought that there was a straight line of evolution leading to man with only a few intermediate forms. According to this view, Australopithecus africanus evolved into Homo habilis, which evolved into Homo erectus, which evolved into Homo sapiens (modern man). However, recent discoveries have shown that many more species existed and the evolutionary pathway is far more complicated with numerous side branches. As an example, the remains of a human species with a very small body and small brain have been discovered on the island of Flores in Indonesia and named Homo floresiensis. Just over 1 m tall and with a brain capacity of only 400 cc (compared with about 1300 cc for a modern human), this species lived as recently as 12,000 years ago. Nicknamed ‘the hobbit’ owing to its diminutive size, its relationship to modern humans is unclear. Some scientists believe that its reduced size was the result of a genetic disorder spreading within an isolated population. Others believe that it was related to its isolation where reduced food resources would favour the evolution of smaller individuals (as for the mini-mammoth, see Chapter 2, page 18).

It is difficult to decide which of the numerous, recently discovered fossils were on the family tree that led to modern humans and which were not. Much depends on agreeing about the precise features that are considered essential in order to be ascribed to our own genus Homo. A number of key characteristics can be discerned from physical evidence alone, such as brain size, the shape of the teeth and the ability to walk upright. For other characteristics such as language and communication, social organisation, religious beliefs and other rituals, it is not possible to assess this with any degree of certainty from a fossil skull alone (although some idea may be gleaned from the impression on the inside of a skull known to be related to the site in the modern brain used in processing speech).

When we compare modern humans (Homo sapiens) with our closest living relatives, the chimpanzees, major differences exist. Among the most important are that modern humans habitually walk upright and have a hand with an opposable thumb suited to making and using tools. In addition, modern humans have a prolonged period of dependency, when the infant is unable to survive independently. During this period, the infant is protected and can learn from its parents. Modern human skulls are less robust than those of great apes and lack the strong brow ridges and other bony crests. Our braincase is far larger (its capacity being approximately 1300 cc compared with 400 cc for the chimpanzee), our face is less prominent and we have a chin (Figure 13.2). Regarding the teeth, there are important differences in size, shape, angulation of the cusps and in the number of roots. One particularly distinguishing feature is that great apes always have large canine teeth which project beyond the level of the adjacent teeth. To accommodate the lower canine, there is a gap (diastema) in front of the upper canine tooth. No such gap exists in the human upper jaw (Figure 13.2). 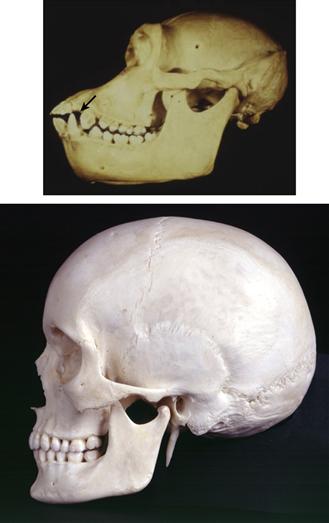 Figure 13.2 Side view of skulls of a chimpanzee (upper) and human (lower). Note the large braincase, the chin, the lack of brow ridges and the reduced size of the canine teeth in humans. Also note the space (diastema) in the upper jaw of the chimpanzee to accommodate the large lower canine (arrow).

As an example of one of our early ancestors, consider the australopithecines. They lived 5–1.5 million years ago and constitute at least five species. Although possessing many primitive ape-like features (such as a small braincase, the body proportions of an ape and a projecting face and lower jaw), they walked upright (bipedal), albeit not as efficiently as modern humans. This facility is reflected in the shape of the pelvis. However, as fossils are rarely found with an intact pelvis, an upright posture can be inferred from a skull by the forward position of the large opening at its base called the foramen magnum (in which lies the upper part of the spinal cord that connects with the brain). In the great apes, which do not walk on two legs, the foramen magnum lies at the back of the skull.

The most remarkable evidence of an upright posture among the australopithecines is the preservation of bipedal footprints made originally in damp volcanic ash at Laetoli, Tanzania, and dating to about 3.5 million years ago.

From the skeletal remains of australopithecines can be answered the question ‘What came first – a large brain or an upright posture?’ The answer is an upright posture, as brain capacity in the early, bipedal australopithecines was about 450 cc, which was not much larger than that of living great apes. It was another 2–3 million years after the first appearance of bipedalism that the brain of early fossil hominids started to increase significantly (relative to body size).

A critical feature in the evolution of modern humans has been the development of a large brain. This development is very expensive in terms of energy requirements and therefore food intake. It takes a prolonged period of time to develop a large brain and the extra skills that become possible with it. All of this can only be achieved with greater dependency of an infant on its parents. For most animals, this extra cost in parental energy and attention is simply not worth it as their lifespan is relatively short. But when mortality rates are low and animals live longer, as in the case of humans, dependency pays off because the offspring are better equipped to survive and produce more offsp/>

Tags: Nothing but the Tooth A Dental Odyssey
Jan 5, 2015 | Posted by mrzezo in General Dentistry | Comments Off on 13. Why Should It Matter How Long Our Ancestors’ Teeth Took To Develop?
Premium Wordpress Themes by UFO Themes
WordPress theme by UFO themes