The quest to improve orthodontic force delivery and treatment efficiency is ongoing. Key developments over the past century have included the introduction of the edgewise appliance, hailed by its inventor as the “latest and the best” (Angle 1928); the discovery of enamel bonding techniques (Buonocore 1955); the subsequent application of bonding in orthodontics (Newman 1965); and the advent of the preadjusted edgewise appliance (Andrews 1976). Self-ligating brackets represent a further refinement.

Self-ligating brackets are ligatureless bracket systems having a mechanical device to close off the edgewise slot. Secure engagement may be produced by an in-built metal labial face or by a clip mechanism replacing the steel or elastomeric ligature. They have been marketed aggressively and used enthusiastically with over 42% of U.S. practitioners using at least one system in 2008 (Keim et al. 2008); this figure rose from just 8.7% in 2002 (Keim et al. 2002). In this chapter the merits of self-ligating brackets will be considered with particular emphasis on prospective clinical research.

The concept of self-ligating brackets was described initially in 1935 with the Russell Lock edgewise attachment (Stolzenberg 1935). The purported advantages of the earlier systems included enhanced versatility and a 50% improvement in operator efficiency; similar benefits are claimed today.

Figure 9.1 Sequential derotation of UL3 with selective use of InOvation R (GAC International, USA) self-ligating brackets. A traction hook was placed prior to placement of a bracket due to space limitation. 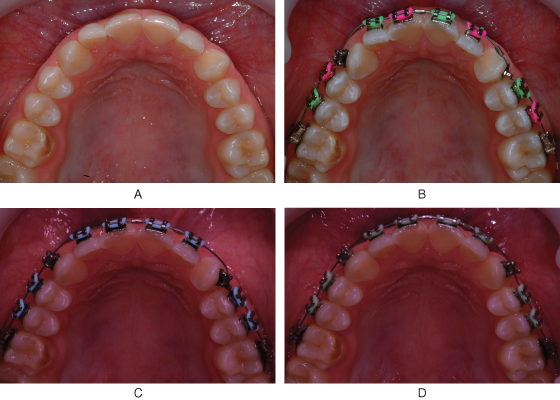 Figure 9.2 (A, B) Presenting malocclusion with severe maxillary arch crowding and palatal displacement of the maxillary lateral incisors. Both second premolars were extracted. (C–H) Light NiTi coilspring and elastomeric traction was placed on the initial aligning wire (C). Glass ionomer cement has been placed on the first molars to disengage the occlusion. At the second visit a 0.016-inch NiTi archwire was fully engaged (D); by this stage most of the upper arch spacing had been closed. (I–K) Case following removal of orthodontic appliances. 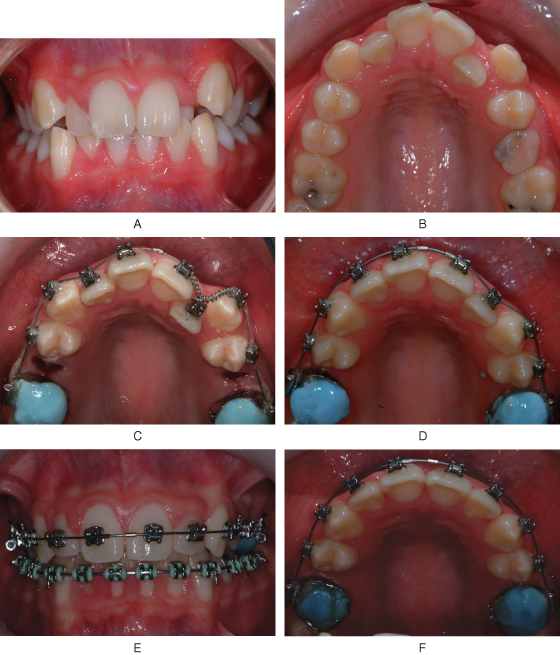 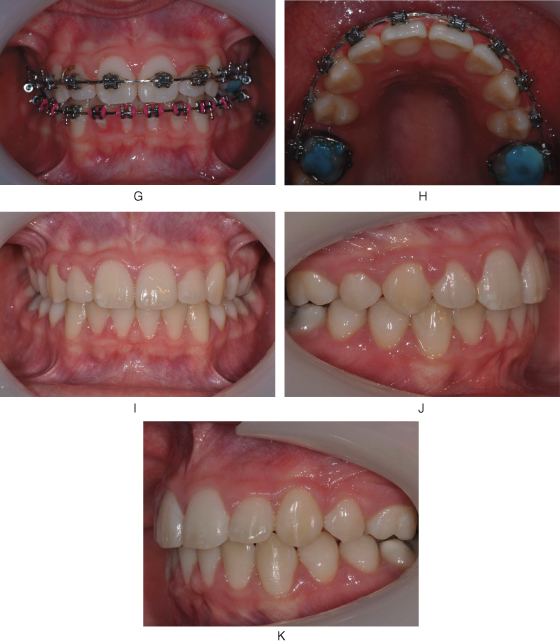 These claims will be considered in the light of laboratory and clinical research findings. It is important to remember, however, that significant differences exist between the self-ligating systems, and therefore the findings from individual trials are not applicable to every self-ligating appliance. In particular, the mechanism of wire engagement varies among self-ligating brackets; wire ligation may be active or passive; brackets may be single or twin in morphology; and bracket dimensions and profiles differ.

Table 9.1 In vitro studies on the influence of bracket type and ligation mode on frictional resistance. 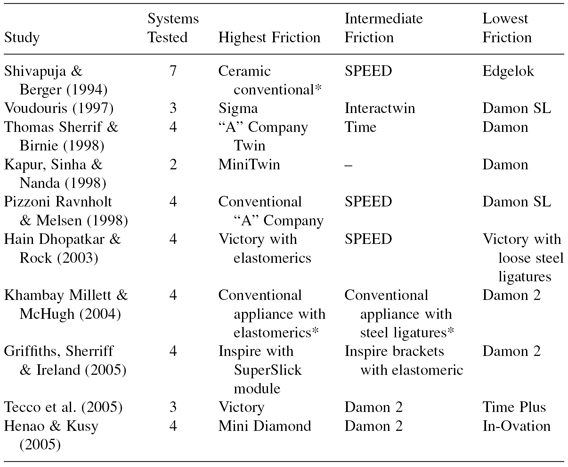 Moreover, tooth movement has proven impossible to reproduce experimentally, making in vitro evidence potentially unreliable. The importance of friction in orthodontic appliances might also be overstated; vibration introduced by mastication significantly reduces friction when sliding a bracket along an archwire (Burrow 2009).

Initially, research on overall treatment time was studied retrospectively. Studies of this nature are invariably compromised due to the possibility of selection bias and uncontrolled factors including varying operator experience and preference, differing archwires and sequences, and inconsistent appointment intervals.

Harradine (2001) retrospectively compared the overall treatment duration of 30 cases treated with Damon SL brackets to 30 matched cases treated by the same operator with conventional brackets. The Damon SL cases required an average of 4 fewer months (19.4 versus 23.5 months) and 4 fewer visits (12.7 versus 16.5) in order to be treated to an equivalent standard based on Peer Assessment Rating scores. The author conceded that the selection of cases for inclusion may have reflected a “tendency to include only the more successful and pleasing.” A further clinical study in three practices found an average reduction in treatment time of 6 months (31 versus 25 months) and 7 visits (from 28 to 21) for Damon SL™ cases compared with conventional ligation (Eberting, Straja & Tuncay 2001). However, Hamilton, and colleagues (2008) in a larger sample of 762 patients contradicted these findings, failing to detect a difference between appliance types. The average treatment duration in this study was just 15.7 months.

Miles, Weyant & Rustveld (2006) commenting on early retrospective studies, proposed that the reduction in treatment times described may merely reflect a transition to more efficient treatment systems rather than being related purely to use of the self-ligating appliance. It seems likely that, with the advent of more efficient treatment approaches, the use of self-ligating brackets is likely to be less influential. In addition it is interesting to note the considerable discrepancy in the length of treatment and the number of visits required between the three retrospective studies.

Over the past 4 years, prospective clinical studies investigating the properties of self-ligating brackets have emerged. These studies have considered surrogate measures of treatment efficiency, including the efficiency of initial orthodontic alignment and the rate of orthodontic space closure, overall treatment duration, arch dimensional changes, bond failure rate, subjective pain experience, degree of root resorption, and periodontal effects related to both systems.

Efficiency and Ease of Use 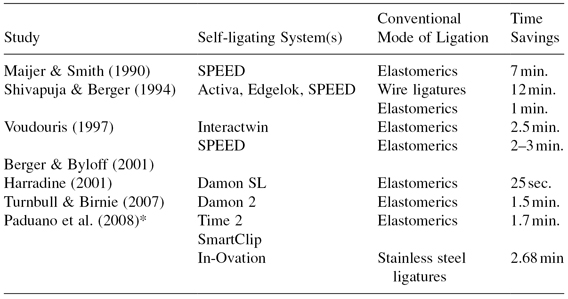 *Figures relate to the maxillary arch.

A number of prospective studies have investigated the efficiency of initial orthodontic alignment over a period of up to 20 weeks. The results from these trials have been consistent, indicating that self-ligating brackets may offer no advantage with respect to treatment efficiency (Table 9.3).

Table 9.3 Comparative studies of the rate of initial orthodontic alignment with self-ligating brackets and conventional brackets.

Miles (2005) compared the alignment efficiency of SmartClip brackets and conventional twin brackets in a prospective analysis of 48 patients. The SmartClip bracket was no more effective at reducing irregularity during the initial stage of treatment than a conventional twin bracket ligated with elastomeric modules or stainless steel ligatures. Slightly more irregularity remained after initial alignment in the group treated with SmartClip than in a group treated with Victory; this was attributed to the rotational play of 6.8 degrees allowed by the passive self-ligating system using a 0.014-inch aligning NiTi wire. This study was limited by a small sample size, two-dimensional measurement, inclusion of both extraction and nonextraction cases, and confinement of measurement to the labial segment only.

These findings were mirrored by Scott et al. (2008a) in a randomized controlled trial of Damon 3 and a conventional appliance in subjects treated with mandibular first pre­molar extraction. The measurement technique deployed was similar to that reported by Miles (2005).