For patients with obstructive sleep apnea (OSA), snoring, or upper airway resistance syndrome (UARS), the primary type of therapy is positive airway pressure (PAP)1–3 (Figure 9.1). However, a significant challenge to both patients and health care practitioners is compliance (acceptance/adherence) to PAP therapy.4

Upper airway patency is maintained by PAP through a mechanism involving the creation of a “pneumatic splint.” The PAP device produces a pressurized airflow that is delivered to the patient via a mask interface. This airflow subsequently creates a positive distension of the upper airway as well as changes in lung volume.

There is a significant amount of published literature about PAP therapy. The purpose of this chapter is to present an emphasis on PAP therapy as it relates to the adult population with SRBD, in particular OSA.

For SRBD that involve collapse of the oropharyngeal soft tissues or narrowing of the upper airway (Figures 9.2–9.4), such as what occurs with OSA, PAP is effective and accepted as appropriate therapy. There are published parameters for the use of PAP in the management of OSA.1 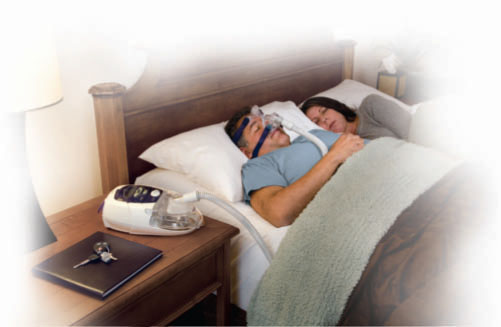 In essence, the objectives for managing OSA with PAP can include the following:5–13 (1) reduction of excessive daytime sleepiness (EDS) that is related to other comorbid issues, such as motor vehicle accidents, cognitive impairments, mood disorders; (2) prevention of cardiovascular sequela, such as high blood pressure; and (3) improvement of sleep for the bed partner, which usually involves the disturbing noises of snoring as well as the observation of apneic episodes. 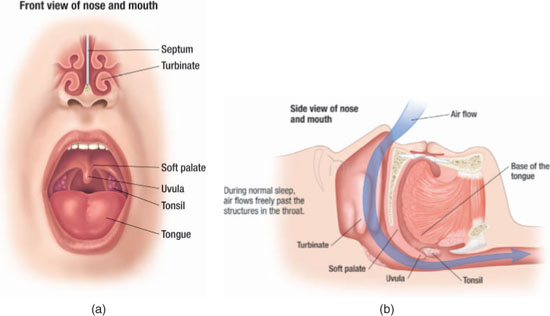 Figure 9.3 The partially obstructed upper airway that may result in snoring and/or hypopneic episodes. (© Krames Medical Publishing, 2009. Used with permission). 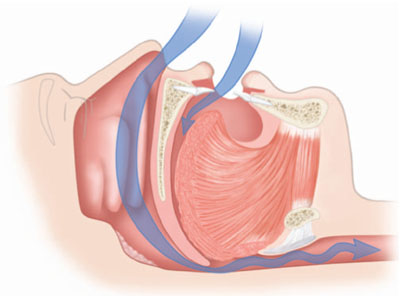 PAP can be effective in obtaining these objectives and thereby improving the quality of life of individuals with OSA as well as the sleep of the bed partners. 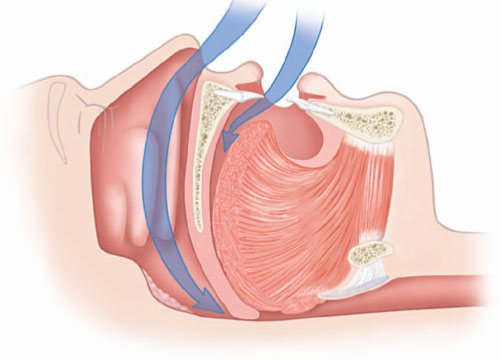 Besides effectiveness for management of moderate to severe OSA cases, PAP therapy may be effective for the management of mild OSA.1 However, there is a greater propensity for those with mild OSA to demonstrate less adherence (compliance) to PAP therapy. It is important for even those individuals with mild OSA to know that there exists the increased risk for cardiovascular issues, such as hypertension (HT).10–14

The individuals with mild OSA or even primary (benign) snoring may not find appealing the alternative treatment options that include either surgical intervention of the upper airway tissues or the use of an OA. The remaining possible conservative options include weight loss, sleep positional changes, sleep hygiene modifications, or other alternative therapies.

As with other areas of medical care, there are Medicare guidelines for PAP therapy reimbursement, which can serve as references for the indications of PAP therapy.15 If there is an apnea–hypopnea index (AHI) of 5–14 episodes/hour that represents mild OSA, then there must also be symptoms or signs of significant impairment. Impairments that qualify include EDS, HT, insomnia, mood disorders, and cardiovascular issues. These impairments are not required for individuals with an AHI of 15 or more episodes per hour that represent moderate to severe OSA.

The effectiveness of PAP therapy for each individual diagnosed with OSA is assessed during an attended polysomnogram (PSG) or sleep study. During the PSG visit, the type of PAP mask interface and the level of airflow pressure effective for managing the OSA are established. This determination may be done during a second sleep study, also known as a two-night study, or they may be performed during the latter portion of a single sleep study, also known as a split-night study.

The flow of pressurized air from the PAP device most often travels through the nasal passages and upper airway, past the soft palatal tissues and tongue, and down the lower airway to the lungs. This pressurized airflow creates an airway patency in the area of the nasal valve as well as in the oropharyngeal area by a combination of anterior displacement of the tongue base and soft palatal tissue along with distension of the lateral pharyngeal walls. In essence, the PAP functions as a “pneumatic splint” (Figure 9.5) that precludes the upper airway from collapsing during sleep.16,17

Compared to atmospheric pressure, the intraluminal pressure from the PAP is positive, which results in a dilation of the upper airway. This increase in the cross-sectional area and volume of the upper airway has been demonstrated with computed axial tomography scanning as well as with magnetic resonance images (Figures 9.6 and 9.7).18–20 Subsequent to the opening of the airway by the “pneumatic splint,” there is a reduction of the upper airway muscle activity,21,22 thereby lowering muscle resistance.

Figure 9.5 The effectiveness of PAP in preventing collapse of the upper airway, also referred to as a “pneumatic splint.” (© Krames Medical Publishing, 2009. Used with permission). 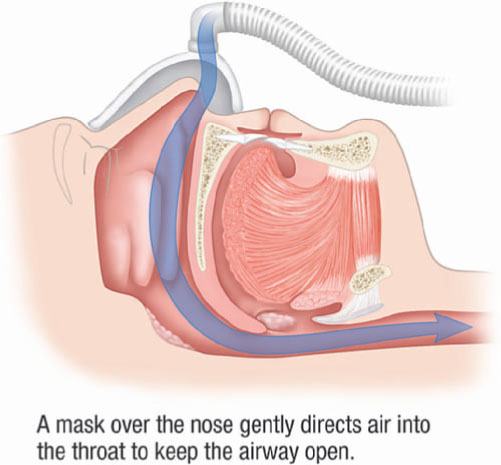 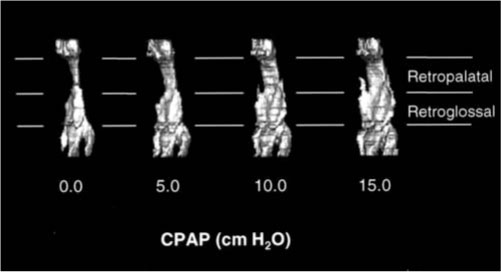 Through the use of memory cards, modems, or wire transfer of data from the PAP device to a computer, there can be an assessment of patient compliance ( Figures 9.8 and 9.9). It is important to obtain adherence data early after the onset of PAP therapy since PAP users who are adherent during the initial 1–3 months are more inclined to continue with PAP therapy.25, 26

However, in those individuals initially using PAP therapy, nonacceptance can vary from 5 to 50%, and by 3 years, an additional 12–25% no longer continue with PAP therapy.4,27,28 When an aggressive systematic follow-up program for PAP treatment is employed that includes appropriate mask interface selection and fitting, heated humidification, patient education, objective assessment of adherence, and early intervention for adverse side effects, PAP user compliance can significantly increase with results varying from 40 to 80%.23,29–34 These statistics are similar to adherence outcomes for chronic diseases managed by oral medications. 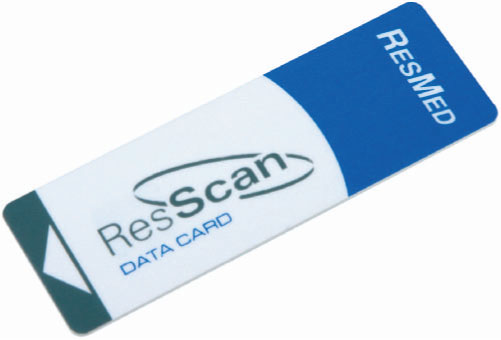 Figure 9.9 An example of a usage profile. The printout reflects nightly usage relative to start and stop times. (© ResMed, 2008. Used with permission). 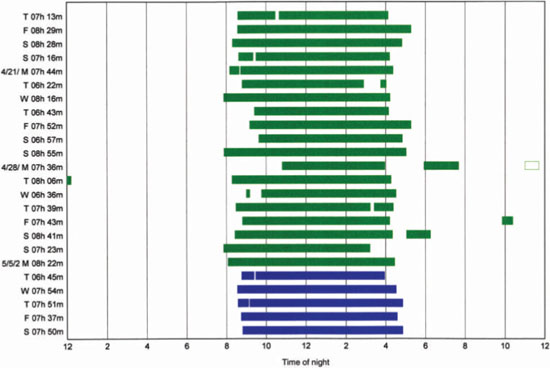 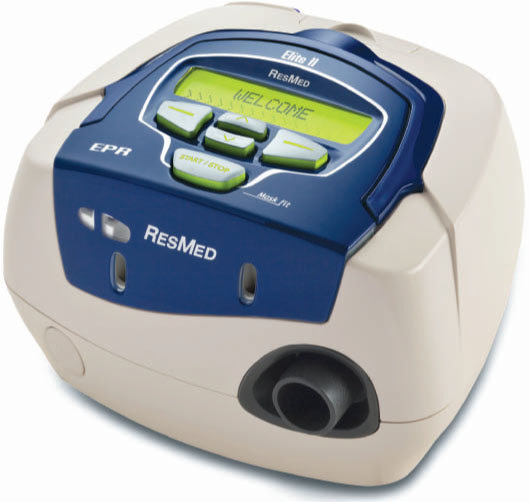 Although CPAP has been used since its inception in 1981, there have been technological advancements resulting in other delivery modes for PAP: BiPAP,36 APAP,37–39 and, most recently, Flexible CPAP (Figures 9.10 and 9.11).40

The use of CPAP for the treatment of adults with OSA was first described in the literature in 1981.41

CPAP mode devices maintain a fixed or constant flow rate of air pressure during both inspiration and expiration. Through management that includes appropriate mask interface and possible use of airway humidification, many individuals find CPAP devices to be compatible for obtaining good sleep hygiene. Humidification can either be heated or at ambient room temperature, although PAP users typically prefer heated. CPAP devices are usually less expensive when compared to the other PAP modes.

Figure 9.11 An example of a PAP device which incorporates a built-in heated humidifier (ResMed S8 Elite with H3i) (© ResMed, 2008. Used with permission). 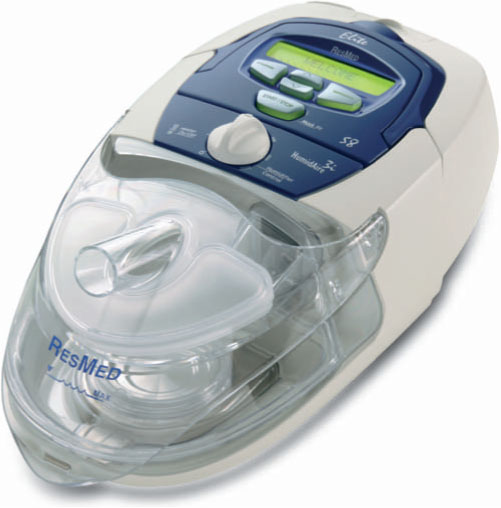 APAP mode devices employ a sensor-based mechanism that automatically adjusts the flow rate of air pressure by continually monitoring the upper airway patency.37,38 Depending on the particular device, one or more respiratory factors are assessed, such as airflow limitations and impedence, which result in an air pressure that is constant during a respiratory cycle but variable during the course of a sleep period.42–45 Adherence of PAP therapy may be improved because of the allowance of a variable mean pressure during the sleep period (Figure 9.12).

Although the built-in algorithms will differ per manufacturer, the common objective is to analyze airflow and provide feedback to the device to allow for a pressure change. So as not to cause a waking arousal, these changes in airflow pressure are made on a gradual basis. The lowest and highest pressure limits of the device are formatted by the health care practitioner. The APAP device can then provide the pressure as needed per the varying respiratory requirements during the sleep period, which is usually the lowest effective airflow pressure needed to maintain upper airway patency.

BiPAP mode devices allow for the provision of airflow pressures that reflect an inspiratory pressure higher than the expiratory pressure (Figure 9.13). Because some CPAP users find the continuous pressure during both inspiration and expiration to be uncomfortable, particularly the expiratory pressure, the BiPAP device’s lower pressure during expiration can make the device more tolerable to the user. A BiPAP device may lend to greater adherence for individuals who experience either aerophagia (i.e., forced ingestion of air into the stomach) or a reduced ventilatory drive.46 Not only are the airflow pressure level and mode inherent to successful adherence with PAP therapy, but so is the challenge of selecting the optimal mask interface between the patient and the device. Mask interface issues can include discomfort from pressure of the mask against the nose or other facial areas, air leaks that can create noise or cause irritation of the eyes, and positional shifts of the mask that result from positional changes of the body during sleep.

As such, the development of various types of PAP mask interfaces by manufacturers has been robust. In addition, each type of mask interface is available in various sizes, typically small, medium, and large. Because the initial several weeks of PAP therapy are critical in establishing patient adherence, the American Academy of Sleep Medicine has recommended close follow-up evaluations to assess and manage issues arising from the PAP mask and/or device.2

Types of PAP mask interfaces (Figures 9.14–9.19) include the following: nasal mask, nasal pillows, full-face mask, oral-nasal mask, and oral mask. All PAP mask interfaces employ a varying type of headgear to maintain mask position. Sometimes it is necessary to also utilize a chin strap to prevent opening of the mouth for those individuals who mouth breathe during sleep. 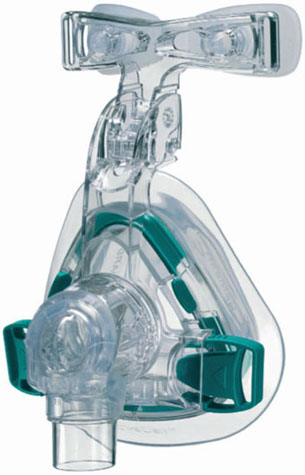 To obtain an optimal seal, there are typically two types of material utilized for the actual area of the mask that interfaces with the patient’s face. One is a thin, flexible plastic sleeve that inflates from the airflow pressure and thus pre/>