Prior to when actual physiological information could be assessed via instrumentation, behavioral-based criteria were employed for descriptions of sleep.2 The advent of laboratory-based polysomnographic studies allowed for the inclusion of measurable data regarding the physiological changes occurring during wake/sleep stages and disorders.3

The purpose of this chapter is to allow for the reader to understand the availability and application of different subjective-based self-assessment and objective-based assessments for sleep disorders.

Relying on a patient to subjectively report his or her sleepiness without the use of a standardized set of questions is inconsistent and highly variable, especially with the significant potential to either underestimate or overestimate their sleepiness. At times it can be better to obtain a more consistent report from an individual who has the opportunity to observe that patient during sleep. However, this latter method is also flawed with its inherent inconsistencies since the patient’s bed partner is generally not awake during the patient’s entire sleep period to provide observable history that is consistent and accurate.

In an effort to quantify self-assessment of sleepiness, question-based instruments to subjectively estimate one’s own sleepiness are composed of a standardized set of statements or questions. Although this type of self-assessment methodology does not provide objective physiologic data that measure wake/sleep periods of the patient, it does allow for a lower cost method to easily acquire at least some patient-based information that can be correlated with the patient’s history and clinical examination.

Of the available subjective-based self-assessments, the most frequently used instrument is the Epworth Sleepiness Scale (ESS), which was developed in 1991. The ESS has been demonstrated to identify degrees of sleepiness,4 and the results are considered to be within acceptable limits for test–retest reliability.5 The eight questions of the ESS query the individual about his or her subjective reporting of sleepiness relative to their expectation of dozing in eight different situations (Table 6.1).

In using a scale of 0–3, where 0 indicates no chance of dozing, 1 indicates a slight chance, 2 indicates a moderate chance, and 3 indicates a high chance, a total maximum score of 24 is possible. Investigations have shown that a score of 10 or 11 is considered to be the upper parameter for normal.6, 7 While higher scores correlate with sleep disorders, it has also been shown that scores also improve relative to the efficacy of management of sleep-related breathing disorders (SRBD).8

Although the ESS is attractive via its simplicity and ease of administration, the instrument does have its limitations, including not taking into account the individual’s age, acuteness of sleep pathology, medical conditions, or use of pharmaceutics. Thus, the ESS is best when it is employed to be an adjunct to the patient history and clinical examination.

Although not employed as commonly as the ESS, another self-assessment instrument is the Stanford Sleepiness Scale (SSS), which was developed in 1972.9

Through a questionnaire that utilizes a 7-point scale, the SSS provides a subjective measurement that relates to the individual’s perception of sleepiness at a specific time (Table 6.2). It is regarded as a momentary evaluation and is therefore useful in assessing the degrees of perceived sleepiness throughout the period of a day. This ability to repeatedly be administered and reflect the current state of sleepiness is an advantage of the SSS over the ESS. 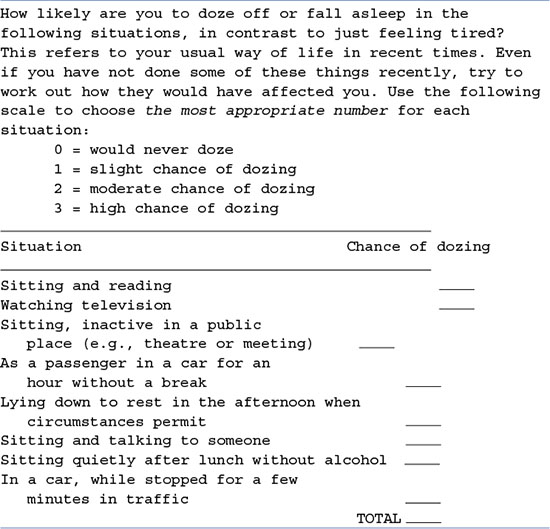 As with the ESS, the inherent brevity of the SSS adds to the simplicity of administering it, although it is best when used to complement the patient history and clinical examination.

To definitively diagnose a sleep disorder, a complete collection of physiologic data from the wake/sleep stages needs to be obtained and interpreted. As defined by the American Academy of Sleep Medicine (AASM), there are four levels (I–IV) of sleep studies from which an objective-based assessment is made (Table 6.3).10, 11. A level I study is regarded as the most accepted study for the assessment and treatment of obstructive sleep apnea (OSA). The four levels are differentiated per the number of simultaneously recorded physiological signals as well as whether or not the sleep study was attended by a sleep technologist.

A polysomnography (PSG) is an overnight sleep study attended by a sleep technologist during which at least seven different physiological signals are measured, and it is a level I study. The PSG is considered to be the “gold standard” in sleep medicine relative to objective-based sleep studies.12 The study is usually conducted in a sleep laboratory/center type of facility with trained staff to ensure proper placement of the necessary sensors as well as recognizing and addressing any displacement of sensors as needed during the study.13 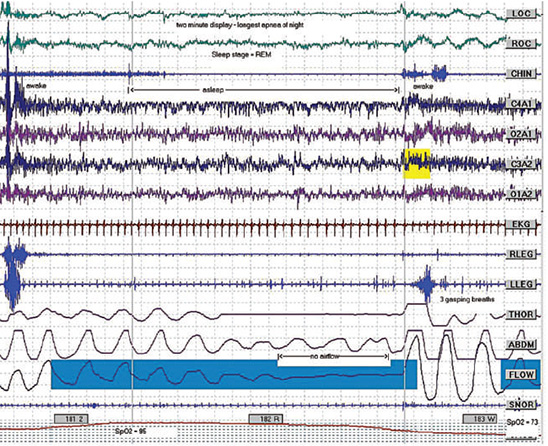 A summary of the entire PSG data can be reflected in a graphic form called a hypnogram (Figure 6.6), which provides a comprehensive glimpse of sleep architecture relative to stages of sleep.

The raw data are scored into different sleep stages and physiologic activities in accordance with standardized criteria,14 and a sleep physician interprets the study results, reviews the patient history and clinical examination data, and subsequently prepares a sleep study report of outcomes and recommendations. Most common sleep disorders can be assessed with a PSG,15 including SRBD.16 Effectiveness of treatment methods can also be achieved with a PSG. 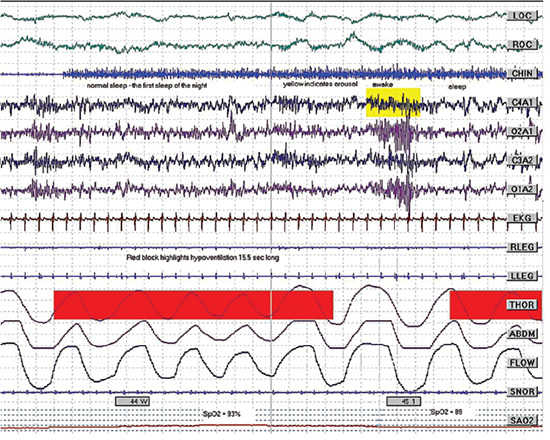