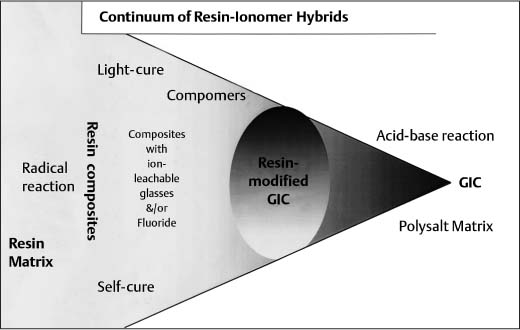 The Broad Rationale of Adhesive Science

The Potential Scope of Orthodontic Adhesives

Adhesive bonding is important for orthodontics, especially in terms of the fixation of brackets to teeth. This situation involves the joining of two solid substrates or adherents by an intervening layer of adhesive agent. The surface interface characteristics are crucial to the success of the bond, as are the inherent properties of the adhesive. Many aspects of the situation are rather general. That is, they are not entirely restricted to the orthodontic context itself.

We shall first sketch sufficient background of adhesive science to facilitate appreciation for the necessary properties of dental orthodontic adhesives. Secondly, we shall outline the range of materials that have been considered for use as orthodontic adhesives. Thirdly, we shall give more detailed treatment of the monomer and monomer-composite systems in extended use. The associated surface modification regimes for the tooth and bracket substrate will briefly be addressed.

The Broad Rationale of Adhesive Science

The characteristic requirements and properties of adhesive agents for orthodontics must be understood in terms of the molecular and structural mechanisms of adhesion. One of the basic questions of physicochemical science is “Why do materials cohere at all?” On the basis of molecular theory, the answer is given in terms of a range of attractive forces that may operate in and between molecules. These may produce bonds of varying strength (that is, the energy required for their disruption), ranging from covalent and ionic bonds to hydrogen bonds and other relatively weak intermolecular forces.

There are a few solids that will spontaneously self-cohere when brought into sufficient proximity. Two familiar examples from dentistry are cohesive gold foil and waxes. Both of these materials are sufficiently plastic in deformation as to self-adapt topographically at the molecular interfacial level, though some physical agency is needed to promote this phenomenon: mechanical force upon gold foil, and gentle heat in the case of waxes. Other examples of joining-coherence may arise under more extreme conditions, such as metals at the melting point, as induced in procedures such as welding or brazing. 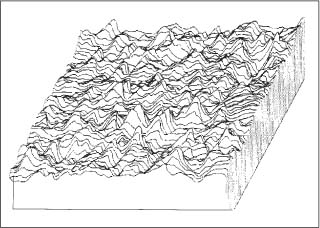 Fig. 9.1 Schematic illustration of the typical microscopically rough nature of solid surfaces that are bonded by adhesives

Most other solids, and certainly tooth tissues and orthodontic brackets, do not cohere upon touching. This is not because of the absence of surface forces but, first, because such forces operate over very small distances and decrease rapidly in magnitude with the inverse sixth or seventh power of separation. Secondly, the solids in question are microscopically rough, as illustrated in Figure 9.1. Hence, when the solids are bought into “contact,” the situation is like two mountain ranges being superimposed en face (Fig. 9.2). The points of actual molecular contact are only a few percent of the whole area. Since solids such as enamel or metal brackets are stiff and elastic, their surface “mountains” cannot flow to self-establish molecular adhesion.

Fig. 9.2 The analogous macroscopic situation to Fig. 9.1 is that of two mountain ranges being forced into contact with each other

The empirical solution to this problem has, of course, been known for millennia. A fluid agent must be introduced between the solids in question. This fluid must adequately wet both surfaces, and flow into the surface pores and valleys. This characteristic requires favorable values of properties such as contact angle and viscosity. By such adaptation, the adhesive promotes intermolecular bonding at the interface with each solid. A type of bond is formed between the solids that may be resistant to disruption by small tensile forces. This is apparent in the case of pairs of microscope slides wetted by water, which may be readily debonded, however, by shear forces.

To generate strong bonding forces, resistant to all common modes of disruption, the next requirement is that the fluid adhesive be converted to a solid. It must thus undergo a phase change, either by physical means (such as cooling from a melt or solvent evaporation) or by chemical setting mechanisms. The former types are widely employed in industrial and household adhesives. The latter are commonly achieved in dentistry by monomer polymerization or by acid-base setting reactions of cements. In the oral environment, there are restrictions upon permissible temperature conditions that restrict not only the possible solidification mechanisms but also the extent to which reactions such as polymerization may proceed to chemical completion. The latter is often expressed in terms of the degree of conversion (DC) of reactive groups in the starting monomer to the desired solid polymer state. Furthermore, the setting reaction may progress over a rather protracted period, from the initial set (when fluidity ceases) to a final extent of reaction.

On solidification of the adhesive, the ideal would be no change whatsoever in the adhesive-zone dimensions. However, most adhesives entail an inherent dimensional instability on setting. This is expressed, in the first instance, as a volumetric contraction or shrinkage. Over a longer period of time, uptake of oral fluids may lead to a gradual expansion that may partially or totally compensate for the initial setting shrinkage.

The setting shrinkage of solvent-based adhesives is readily understood in terms of the loss of the volume fraction of solvent. The shrinkage of polymerizing systems is conventionally understood in terms of a major (van der Waals) contribution from the exchange of intermonomer molecular spacings for the more compact covalent bonds between repeat chain units. A further (entropic) component is likely from changes in chain packing on setting. This also will be a factor explaining the setting shrinkage of glass-ionomer cements.

The overall phenomena of polymerization shrinkage are rather complex. This problem is of paramount importance in restorative dentistry. In orthodontics, the problem is less severe, because the tooth/bracket system can more readily accommodate changes in thickness across the adhesive interfacial layer. Nevertheless, any lateral shrinkage strain components will generate disruptive bond stresses.

In summary, adhesive solidification is essential. Nevertheless, it may be partial in extent of reaction, and brings some associated problems of shrinkage strain and stress. This leads us to consider and classify the resulting bond mechanisms holding the bracket to the tooth. For this purpose it is helpful to use the term bonding for the desired outcome. This can be subdivided into two components: (chemical) adhesion and (mechanical) attachment. Thus:

Under adhesion we would group all those contributions to bonding attributable to specific molecular interlinking via hydrogen bonds, London forces, and other van der Waals forces. We can include under adhesion the kind of molecular chain intermeshing or inter-penetration of networks now known to be formed at the dentin-bond hybrid zone. Under attachment, we think especially of the so-called “tag” formation established with acid-etched dental enamel. This arises in situations where a highly rigid but porous substrate allows penetrating resin flow and solidification in situ. Mechanical interlocking is thereby attained, and this is a situation relatively insensitive to the gradual agency of adsorbed water competing for chemical bonds at the interface. Similarly, at the bracket/adhesive interface, attachment is the dominant contribution to bonding via the gross surface “undercut” detail of the fitting surface. It follows from the preceding considerations that orthodontic adhesives should have suitable flow properties, giving wettability and penetration without undue slumping or bracket drift; this rheo-logical characteristic is often expressed as thixotropy, or at least as having a yield stress before flow. The adhesives should furthermore be designed to undergo rapid initial set and to minimize setting shrinkage. Their overall water-absorbing tendency should be minimal.

Many other requirements that pertain in operative dentistry are of limited or no consequence in orthodontics. These includes factors such as aesthetics and color stability (which may be of interest to adult orthodontic patients). We shall now examine the range of adhesive formulations that have been considered for use in this application.

The Potential Scope of Orthodontic Adhesives

Most orthodontic adhesives are variations on adhesive and direct-restorative formulations manufactured for use in restorative dentistry. The commercial reality is that competing manufacturers engage in a continual round of development and innovation. During the last quarter of the twentieth century there were two competing categories of nonmetallic direct restorative biomaterials. These may be denoted the salt-matrix and the resin-matrix types (Table 9.1) that originated, respectively, in the United Kingdom and the United States.

During the 1990s, a major development has been the hybridization of the technology underlying resin composites (RC) and glass-ionomer cements (GIC). That is, components from both systems have been combined in various ways with the aim of developing materials that will ideally exhibit the best characteristics of each “parent.”

Combining the characteristics of both types entails a combination of setting mechanisms and thus a mixture of network types. These various hybrids occupy positions on an almost continuous spectrum between the extremes of the pure resin composites and the pure glass-ionomer cements, both of which continue to undergo separate development (Fig. 9.3). However, in practice the spectrum is discontinuous at the point where water is either included in or excluded from the formulation. At present, there is particular interest in the possible competition between setting mechanisms and also the effect of variations in light exposure on the light-activated materials. 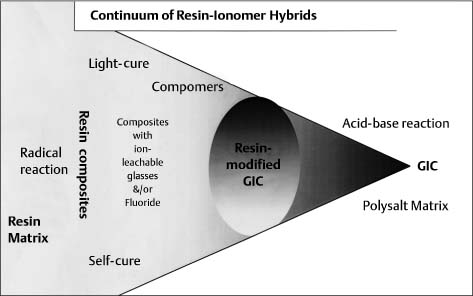 Glass-ionomer dental cements were invented i/>