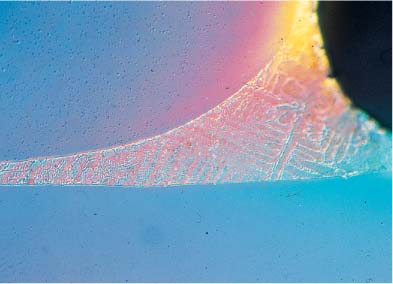 Tranverse section of a bracket, with the base down. Solder is visible in the triangular space. (Original magnification × 40)

The Type I “Immediate” Reaction

The Role of Orthodontically Derived Nickel

During orthodontic treatment the oral tissues may be exposed to fixed metal appliances such as molar bands, brackets, transpalatal bars, facebows, archwires, and retainers with auxiliary devices such as springs and hooks. Resin-based materials in bonding systems and removable appliances, along with ceramic brackets, add to the range of orthodontic biomaterials. In addition, polyurethane elastomers and headgears of different composition belong to the orthodontic armamentarium. Altogether, orthodontic appliances can comprise a considerable surface of biomaterials in contact with the oral mucosa for a prolonged period of time, and portions may also extend to the skin of the chin, cheeks, and neck. Fixed orthodontic devices manufactured from base metal alloys are more prone to corrosion than those of noble metal alloys, and removable devices are often produced by chemical polymerization (“cold-curing technique”), facilitating dissolution phenomena and leaching of unreacted components, as compared with heat-cured products. The present chapter will discuss adverse reactions following the uptake of components derived from orthodontic appliances. Consideration of the adverse potential associated with orthodontic biomaterials will include a discussion of occupational hazards. The allergenic role of nickel will be emphasized.

The principal factor in the oral environment is the saliva, containing both organic species and inorganic components such as chloride and phosphate ions. Although saliva is a well-buffered secretion, pH variations occur as a result of food and drink intake and microbial activity. Intraoral devices will therefore be subjected to chemical and physical environmental factors such as pH fluctuations, electro-chemical activity, temperature differences, and abrasive and mechanical forces, all contributing to material deterioration. Depending upon the nature of the material (metallic or nonmetallic), these processes are called corrosion or degradation.

As previously discussed in Chapter 1, corrosion is the term for an electrochemical reaction between a metallic material and its surrounding environment. In the oral cavity, corrosion takes place by release of positive metal ions from orthodontic alloys to form more stable compounds such as chlorides, sulfides, and oxides. Such thermodynamically unstable metals as iron, nickel, chromium, molybdenum and titanium are important component elements of archwire alloys (Chapter 4) and metallic brackets (Chapter 7). In addition, orthodontic solders are often alloys of silver, copper, and zinc, sometimes with traces of nickel, chromium, and iron. There are also solders based upon nickel or gold as the main component element.

The release of metal ions is not directly proportional to the amount of each metal in the alloy. For example, NiTi archwire alloys containing 54 wt% nickel have been found to release negligible amounts of this element because these alloys are highly corrosion resistant. Corrosion phenomena are increased by internal stresses in the metal appliances, by the inhomogenous structure of the alloy, and by different metals coming into contact. A smooth, homogenous surface makes an orthodontic appliance less prone to corrosion, whereas inhomogenous soldered connecting points between different parts of an appliance are highly susceptible to corrosion. Figures 15.1 and 15.2 illustrate the type of contact that can arise between different alloys in a facebow and a bracket, and their corresponding solders. 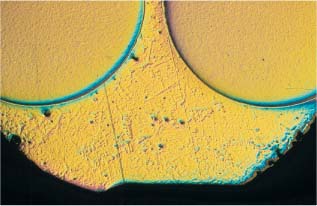 Recycling of stainless steel brackets after high-temperature heating may make the steel less corrosion resistant. Corrosion phenomena apparently do not diminish the mechanical properties of the brackets to any significant extent, but they contribute to the release of foreign substances that may have biological implications. The presence of passivating surface oxide films such as chromium oxide on stainless steel (Chapter 4) slows the corrosion, whereas abrasion, polishing, high acidity, or high chloride concentration contributes to the loss of these passivating films.

Polymeric materials are subject to degradation as a result of the combined chemical, microbiological and wear processes that occur in the agressive environment of the oral cavity. Residual double bonds in the backbone of pendant side chains of the macromolecule are attacked by thermal, mechanical, chemical, or photochemical mechanisms. Release of oxidation or hydrolysis products occurs, along with residual monomers and components belonging to the polymerization process (Chapters 9 and 10). These components may include chemical initiators, activators, and inhibitors, or their degradation products. In addition, resin-based removable appliances may contain leachable plasticizers originally incorporated to improve physical properties. Orthodontic adhesives add to the repertoire of leachable organic substances, together with remnants of coupling agents from inorganic fillers of orthodontic composites that have been subject to hydrolytic degradation. The use of alginate or other impression materials represents additional possibilities of contact with other polymerizing materials and chemical additives connected with polymerization processes. In addition, the use of orthodontic latex elastics and latex gloves results in exposure to components related to latex. Components leached from latex are chemically active substances with potentially haptenic properties (see later).

It follows that the pool of xenobiotic substances derived from orthodontic treatment in the oral cavity is a mixture of inorganic ions and compounds, together with organic components.

Some products are surface layers in the form of tarnish and passivating films, and other products are more soluble compounds released into the neighboring mucous or salivary flow. Most species are of low molecular weight, and their concentrations in the oral environment are difficult to assess. In addition, the origin of certain products may be difficult to distinguish from that of similar species derived from food, cooking utensils, or the respiratory environment. 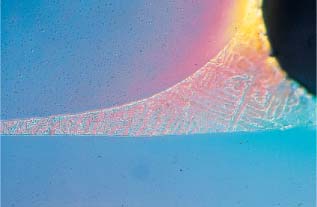 Fig. 15.2 Tranverse section of a bracket, with the base down. Solder is visible in the triangular space. Original magnification × 40

Volatile substances from resin-based bonding materials or removable devices may represent an occupational hazard for orthodontic personnel by respiratory tract and conjunctival absorption. Otherwise, the clinically relevant route of entrance for chemical species associated with orthodontic treatment is through the oral mucosa or the skin of patients. Orthodontic devices are placed in intimate contact with the surface of the oral mucosa and, for some devices, the skin and the mucocutaneous transitional zone of the lips. Since the appliances cannot always be anatomically shaped to perfection, the probability of (perhaps sub-clinical) frictional injuries of the movable parts of the soft tissues always exists. Despite these circumstances, the soft-tissue contact is generally uneventful. The exceptions are adverse effects following the uptake of released foreign substances.

In principle, all foreign substances have to pass the membraneous barriers of epidermal or epimucosal cells to reach the blood and lymph capillaries. The passage takes place by passive diffusion, depending upon the chemical nature of the foreign molecule, the concentration gradient, and the thickness and surface area of the membranes. Lipophilic, nonpolar xenobiotics diffuse by dissolving in the phospholipid membranes, whereas small, hydrophilic, or polar molecules are transported by diffusion through the aqueous membrane pores. For anatomical reasons, diffusion through the lipid phase of membranes is the most important transport mechanism.

In skin the xenobiotic molecules must pass through multiple layers of epidermal cells. Not counting the small portion of nonkeratinized epithelial tissue located adjacent to sweat glands and hair follicles, the outer layers of the epidermis are composed of denucleated, biologically inactive, keratin-filled and dehydrated cells with thickened cell membranes. The physical state of this tissue results in a slower diffusion rate for a chemical species than does nonkeratinized epithelium. The inner layers of the epidermis do not provide a similar diffusion barrier. Despite these factors, foreign substances are transported across skin, and increasingly so if the keratinized outer layers are removed or injured after contact with soaps and detergents. Occlusion of skin with bandages, tapes, or gloves has similar effects, all explained by increased hydration and by disintegration of the keratin molecules.

The permeability of the nonkeratinized parts of oral mucosa is comparable to that of hydrated skin. The absence of the physical barrier of the keratinization is partly compensated by a layer of mucus, consisting of acid, phosphated or sulfated glycoproteins, and lipid produced by the small salivary glands. The mucus adheres well to soft and hard tissues, and helps retain fluid, inorganic ions, and salivary proteins in place. It is conceivable that the mucinous glyco-proteins also bind trace substances leaching from orthodontic biomaterials, but definitive experimental data in this area are not available. Although the mucous flow diminishes the contact time between the oral mucosa and the absorbants, the constant moisturizing of the oral mucosa facilitates absorption. The connective tissue is not considered a diffusion-limiting factor in either tissue. The antigen-presenting Langerhans cells are present at a higher concentration in the suprabasal epidermal layers as compared to the corresponding mucosal layers.

Most components leaching out from orthodontic devices would be toxic if present at concentrations exceeding a threshold limit dose. Nickel imparts useful properties to many orthodontic alloys (Chapters 4 and 7), although it is a powerful toxicant and a carcinogen. Nickel is present in small amounts in animal, fish, and vegetable foods, and in the air, depending upon the degree of urbanization. The daily human absorption of nickel from food is approximately 300–500 μg. In comparison, the in vitro release of soluble forms of nickel from a simulated full-mouth orthodontic appliance into 0.05% saline solution is about 40 μg. The corresponding data for chromium are 5–100 μg taken up from food and 36 μg released from the orthodontic appliance in the form of nonsoluble passivating surface precipitates. Other in vitro studies have indicated similar concentrations. Attempts to determine the actual concentration of nickel in the saliva of orthodontic patients have been inconclusive, apart from the finding of extremely low concentrations. The blood level of nickel is not affected following the insertion of orthodontic appliances. Other components from dental materials in the oral cavity are also present in trace amounts, if measurable. Based upon these considerations, a systemic toxic effect of nickel – or from other components derived from metallic orthodontic appliances – is highly unlikely. The potential for side effects due to components derived from metallic orthodontic materials is limited to dose-independent allergic reactions, although it has been suggested by Swedish dermatologists that nickel derived from dental biomaterials or other sources may play a part in the development of the chronic fatigue syndrome (CFS). CFS patients have been shown to have a high frequency of immunological abnormalities, such as nickel allergy. A possible psycho-neuroimmunological mechanism would include lymphocyte activation by the nickel, with the release of various cytokines able to cause generalized symptoms.

An adverse reaction following contact with subtoxic doses of foreign substances is referred to as hypersensitivity. Hypersensitivity reactions comprise three different mechanisms: allergy, intolerance, and hyperreactivity. Intolerance reactions are mostly related to foodstuffs and inborn errors of metabolism. Hyperreactivity responses are often related to volatile irritants. Allergy is an acquired condition resulting in an overreaction upon contact with a foreign substance, and arises from a genetic predisposition and previous sensitization from exposure to the substance. Allergic reactions may include asthma, rhinitis, conjunctivitis, urticaria, intraoral and systemic symptoms, and eczema brought about by several immunopathological mechanisms. These mechanisms are most often categorized into four groups, types I to IV, of which the immediate reaction (type I) and the delayed reaction (type IV) have relevance to orthodontic bio-materials.

The Type I “Immediate” Reaction

The type I reaction often occurs a few minutes after contact with the antigen in a sensitized individual. The antigen combines with IgE antibodies located on mast cells or basophilic leukocytes, and releases mediators such as hista-mine and prostaglandins, leading to increased capillary permeability, contraction of smooth muscle, or disturbances of endocrine function. Depending upon the sensitized organ, the resulting symptoms may be asthmatic seizures, swelling of the mucosa of the throat and eyes, urticaria, contact urticaria or worse decreased blood pressure and anaphylactic shock. The type I reaction depends on sensitization with full anti/>