The ability to effectively intrude teeth (and avoid extrusion of anchor unit teeth) is one of the most revolutionary applications of mini-implant anchorage. For the first time in orthodontics it is realistic to intrude single or multiple anterior and posterior teeth, albeit with the caveat that the periodontium needs to be healthy in order to avoid an exacerbation of pocket depth. In the presence of normal periodontal tissues, the intrusion mechanism appears to involve alveolar remodelling (a reduction in alveolar height), rather than just submergence of the teeth within the alveolus. Kanzaki et al. (2007) suggested that this is ‘conceptually equivalent to surgical impaction of alveolar bone by using a segmental osteotomy’.1 Hence, only a limited reduction in clinical crown height occurs and normal probing depth is maintained. Furthermore, it appears that orthodontists’ classical concern of apical root resorption (due to intrusive forces) is not a significant problem, even with relatively heavy forces.2,3

Figure 9.1 Diagram of incisor intrusion mechanics where vertical traction is applied from bilateral mini-implants, sited mesial to the canines, to the archwire or nearby brackets. 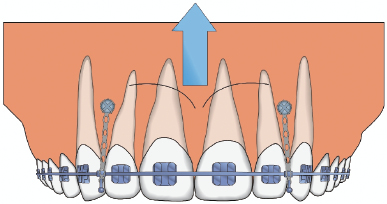 1. Diverge the roots of teeth adjacent to the insertion site by bonding their brackets at altered tips, e.g. for insertion mesial to the canine root then add mesial tip to the lateral incisor bracket and distal tip to the canine one.
2. Level and align either the whole arch with a full fixed appliance, or only those teeth requiring intrusion with a sectional fixed appliance. This depends on the extent of the vertical discrepancy between the intruding and adjacent teeth, such that a large step favours segmental mechanics prior to full arch engagement.

3. A narrow diameter mini-implant, e.g. 1.5 mm short neck version, is appropriate for interproximal sites.
4. Select a mini-implant with a short neck to reduce the risk of the traction being more buccal (distant from the surface) than the crown surface and hence increasing the tooth’s inclination.
5. If there is sufficient height of attached gingiva then the insertion should be perpendicular to the surface, in which case a relatively short body length (e.g. 6 mm length Infinitas version) is appropriate and avoids the risk of lingual perforation. However, if a limited height of attached gingiva dictates that oblique insertion is required, then it may be more appropriate to select a longer body length (e.g. 9 mm) mini-implant.

6. Aim to insert the mini-implants close to or at the mucogingival junction in order to provide sufficient vertical range for continued tooth movements.
7. Superficial anaesthesia of the insertion sites.
8. Insert at least two mini-implants on the buccal side of the alveolus such that intrusive forces can be applied from both sides of the target tooth or group of teeth.
9. Take an intra-oral radiograph if close root proximity is clinically suspected.
10. Complete insertion to the point that the mini-implant neck is partially submerged and the head has a low emergence profile yet is fully accessible.

11. Apply traction from the mini-implants to adjacent brackets or an archwire hook. Use approximately 50 g (elastomeric chain) traction for the first four to six weeks, then increase the force to around 150 g provided that a group of teeth are being loaded.
12. Monitor treatment progress by recording key features at the start of intrusion and at subsequent appointments: overjet, AOB/overbite, and buccal segment relationship.
13. Monitor the periodontal condition (probing depth) of the intruding teeth during treatment.
14. Consider over-correction of the intrusion effects to allow for possible relapse.
15. Keep the mini-implants in situ until it is clear that further anchorage is not required.
16. Consider an intensive initial retention regimen, e.g. three months full-time wear of full-coverage plastic retainers. This should prevent early vertical relapse of intruded teeth (but not of any extruded teeth).
– – – – – – – – – –
Case Examples
1. Single tooth intrusion case (Fig. 9.2)
2. Incisor teeth intrusion case (Fig. 9.3)
– – – – – – – – – –

Figure 9.2 (a) Pre-treatment views showing this severe Class II division 1 malocclusion complicated by over-eruption of the maxillary left canine and inadequate dental support for formal fixed appliance treatment. (b) The upper left canine at the start of its intrusion, following a mandibular advancement osteotomy to correct the Class II discrepancies. Elastomeric traction is applied from mesially and distally sited 6 mm length mini-implants to a low profile cleat. This intrusion will enable the lower buccal teeth to be levelled. (c) The canine intrusion is progressing by eight weeks and (d) by sixteen weeks its level has been over-corrected, without buccal tipping. A vertical box elastic is then added to extrude the lower teeth. (e) Debond view, accepting incomplete occlusal interdigitation. 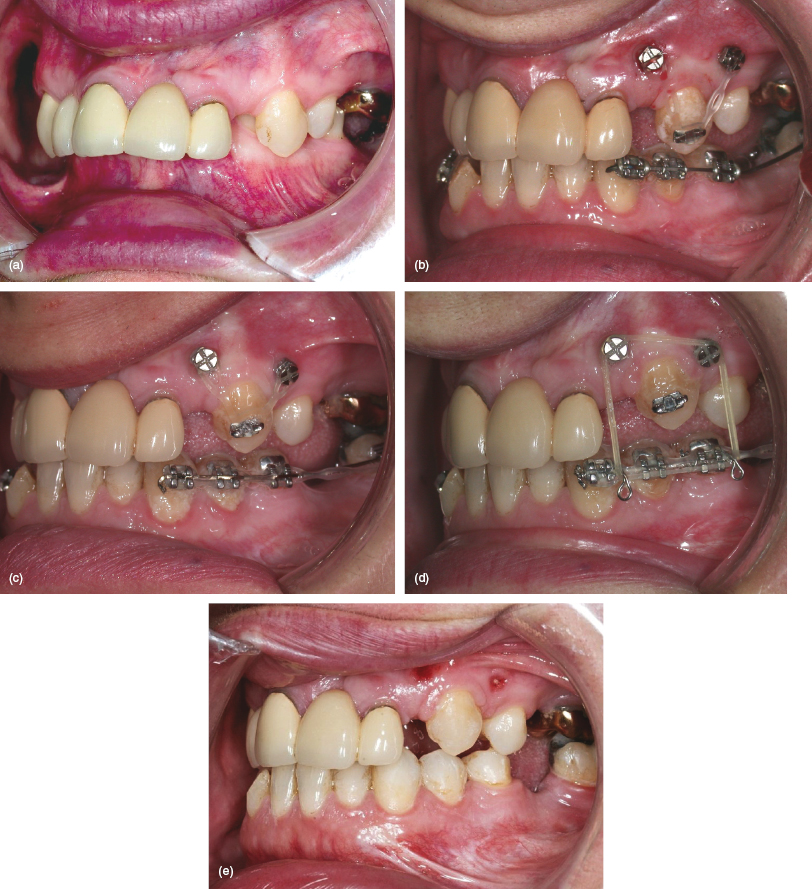 Figure 9.3 (a) Pre-treatment view showing the over-erupted upper left central incisor, absence of the upper right first premolar and left canine teeth, and anterior spacing. (b) Vertical traction from bilateral mini-implants, inserted at the mucogingival junction, with a 0.019 × 0.025 steel archwire. (c) View of aligned teeth and the improved gingival contour during treatment, and then (d) four years after debond. 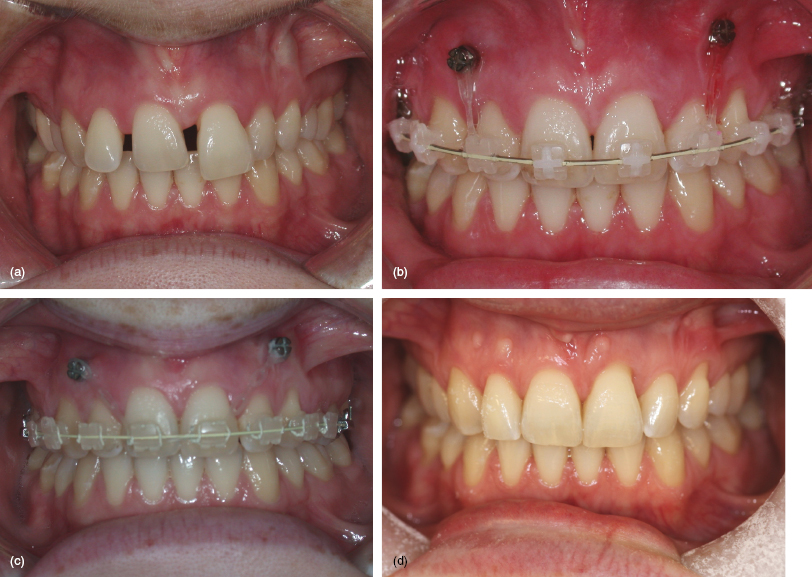 Anterior openbite (AOB) is one of the most difficult malocclusion features to treat non-surgically. Traditional orthodontic camouflage tends to extrude the incisors, but this has several key disadvantages: the risk of excessive upper incisor exposure (crown length display); unfavourable incisor retroclination; an unaesthetic effect on the nasolabial profile and smile; and a particularly high relapse risk (partly due to practical difficulties in retention).4,5 There is also a greater tendency to prescribe premolar extractions in AOB cases with the aim of limiting incisor proclination and consequently vertical incisor separation. Furthermore, it is claimed that premolar extractions enable mesial movement of the molars and consequently reduce the maxillo-mandibular planes angle (MMPA), but this is not supported by research evidence.6 Therefore, extraction decisions should be based on dental factors such as crowding and centreline discrepancies, rather than the AOB per se. The alternative of surgical impaction of the posterior maxilla is effective, but it involves invasive and expensive treatment, it must be delayed until after completion of facial growth, and it entails surgical morbidity and risks, and possibly unfavourable nasal changes. How much better would it be to both correct the AOB and improve dentofacial aesthetics by a more effective and patient-friendly approach?

Mini-implant molar intrusion now represents a real alternative to orthognathic surgery in Class I and II skeletal AOB cases (but not in skeletal Class III patients where mandibular autorotation would worsen the antero-posterior relationship). In effect, clockwise rotation of the maxillary occlusal plane causes a reduction in both the MMPA and AOB.7,8,9,10,11 Crucially, intrusion treatment is feasible in both adults and adolescents, and avoids the surgical morbidity and in-patient costs associated with a maxillary osteotomy. Over the last few years I have given those AOB patients, whom I think may benefit from orthognathic surgery, the opportunity to discuss the options fully on a combined orthognathic clinic: none have opted for surgery on the basis of their AOB problems, and some have been desperate to avoid surgery even accepting residual Class II facial features. I find this to be genuine informed consent and would advise that such patients are given details of all options open to them. In my experience, none have regretted taking a non-surgical approach.

After first utilising buccal mini-implant sites, I have found palatal insertion sites to be much more effective for maxillary molar intrusion in terms of the greater availability of interproximal space, sufficient cortical bone support and range for vertical traction.12 Consequently, the clinical steps outlined here describe the culmination of this experience with palatal mini-implants combined with an intrusion transpalatal arch (TPA) or quadhelix.