Immediate loading of the edentulous mandible has been reported with favorable outcomes.1–4 Several variations in the approach for this procedure have been considered. Schnitman in his study1 placed four to six mandibular implants and immediately loaded a select few. Using the tripod concept, Brånemark designed and used the Novum implant system with three implants for immediate loading on the edentulous mandible. The results from this prefabricated surgical protocol were favorable.5 Use of this system was limited, however, because of the need for 22 mm or more of vertical height from the crest of the mandibular alveolus to the occlusal table of the maxillary teeth.

Duyck in 2000 demonstrated the biomechanical effectiveness for limiting the number of implants used in the edentulous patient as long as a geometric pattern resembling the “cornerstone” concept was followed.6 Krekmanov also performed in vitro and in vivo studies on the efficacy of using only four implants to support a fixed prosthesis for the fully edentulous patient.7 Early reports of surgical success for this approach have been reported to be between 80% and 85%.1,2 Studies published by Brånemark et al.3 in 1999 and van Steenberg et al.8 in 2004 reported success rates of 98% and 93%, respectively.

Maló, Rangert, and Nobre reported a cumulative success rate of 96.7% in their study published in 2003.9 The findings in the literature are consistent with the original studies published by Brånemark, and limit four implants in each arch to support a fixed prosthesis.10 The results obtained with the immediate-load approach for treatment of the edentulous mandible are also consistent with the surgical success results seen in the traditional two-stage approach.10–12

The ability to treat this group of patients without grafting and in a single appointment is encouraging and warrants updating. The purpose of this chapter is to present a comprehensive, systematic pretreatment protocol for treatment of the edentulous mandible using the immediate-load concept.

To begin treatment using an implant-supported fixed prosthesis, it is important to appreciate that this treatment option can be used for the already edentulous patient as well as for the patient who has nonrestorable teeth or failing implants planned for removal. The ability to simultaneously remove the patient’s failing teeth, place the implants, and convert the immediate denture into a fixed provisional prosthesis is the key to patient acceptance of this treatment concept (Figures 8-1, 8-2, 8-3, and 8-4).

FIGURE 8-1 The graftless approach to immediate loading allows treatment of patients who have periodontally involved and nonrestorable teeth. 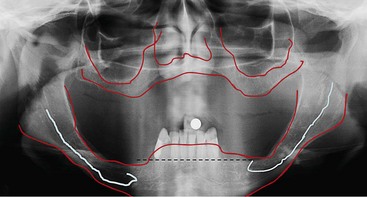 FIGURE 8-2 Patients presenting with “combination syndrome” may also be good candidates for a graftless immediate-load protocol. 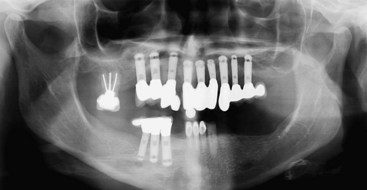 FIGURE 8-3 Patients with peri-implantitis, after careful clinical evaluation, may be good candidates for immediate implant removal and replacement using the graftless approach.

FIGURE 8-4 Patients with a moderately to completely resorbed alveolus are the primary candidates for a graftless approach and immediate loading.

To predictably execute this treatment, four criteria should be considered during the treatment planning period:

1. Presence or absence of composite defect
2. Type of final prosthesis to be fabricated
3. Visibility or lack of visibility of the transition line
4. Position of the mental foramen and loop of the inferior alveolar nerve 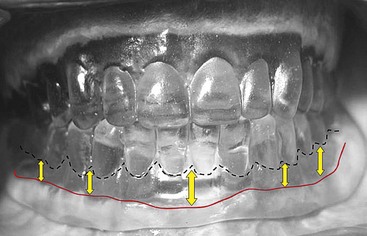 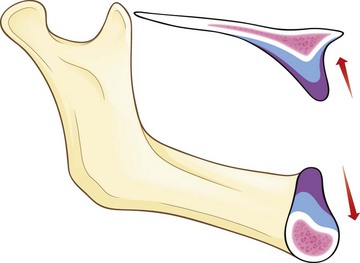 FIGURE 8-6 Lack of internal loading leads to inferior and posterior resorption of the edentulous mandible.

As mentioned previously, existence of a composite defect warrants the fabrication of hybrid prosthesis. The conventional “Toronto” bridge”13 (Figure 8-7) can be used, because neither air-escape nor phonetics are clinical problems in the mandible as they are in the maxilla. Unavailability of appropriate abutments at that time and the resultant use of “standard” abutments for fabrication of the original hybrid prosthesis were the major reasons for the gap between the intaglio surface of the conventional hybrid prosthesis and the soft tissues. Today the design of the mandibular profile prosthesis as described by Schnitman1 is recommended (Figure 8-8). Substitution of the multiunit Nobel Biocare abutments, as used in the maxillary profile prosthesis,14 allows for a more anatomically correct mandibular prosthetic design (Figure 8-9). For cases in which the edentulous defect is tooth-only,14 a ceramo-metal prosthesis can be fabricated. 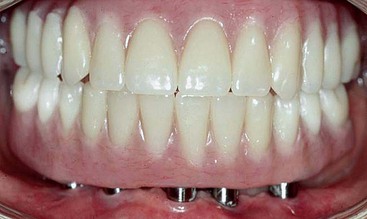 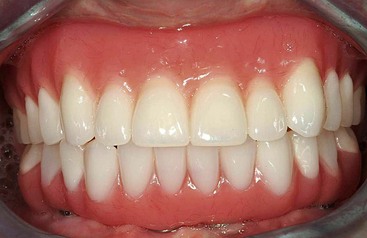 FIGURE 8-8 The mandibular profile prosthesis with a more anatomic relationship between the base of the prosthesis and the patient’s mandibular crestal tissues. 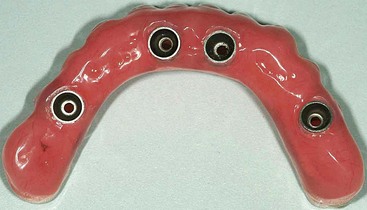 FIGURE 8-9 The metal framework is within the porcelain or acrylic material used to replace missing soft and hard tissues in the profile prosthesis.

FIGURE 8-10 During animation, the mandibular transition line is generally not visible.

Position of the Mental Foramen

According to the “cornerstone” concept as presented by Duyck,6 placement of four implants is biomechanically stable for the support of a fixed mandibular prosthesis.10,15,16 The goal is to have the largest possible anterior-posterior (AP) distribution between the anterior-most and posterior implants. The position of the mental foramen, however, limits placement of the two distal implants, which forces the surgeon to place the implants anterior to the mental foramen and not in the desired prosthetic position as demonstrated by the blue line in Figure 8-11. To place the implant platform as posteriorly as possible, tilting the implant platform distal to the mental foramen is considered because this increases the AP distribution and limits the cantilever arm of the prosthesis (Figure 8-12). It has been reported that limiting the cantilever arm of the distal extension to 15 mm or less is consistent with favorable survival of the implants and the prosthesis (Figure 8-13).17,18 To achieve prosthesis survival, it is important to identify the position of the mental foramen. This may be accomplished using conventional panoramic radiographs as well as cone beam computed tomography (CT) (see Figure 8-13). The anatomy of the inferior alveolar nerve as it exits the mental foramen has been studied and reported in the literature by Rosenquist.19 Arozouman et al.,20 Bavitz et al.,21 Misch and Crawford,22 and Kaya et al.,23 The main trunk of the inferior alveolar nerve enters the mandible on its lingual surface and is protected by a bony projection known as the lingula. It travels through the body of the mandible and branches into the mental and incisive nerves. The inferior alveolar nerve loops superiorly and then exits the mental foramen posteriorly, exiting the mental foramen pointing posteriorly.24 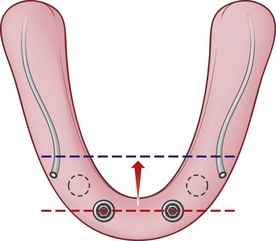 FIGURE 8-11 The limitation for the posterior extension of the distal implants is the presence of the mental foramina. 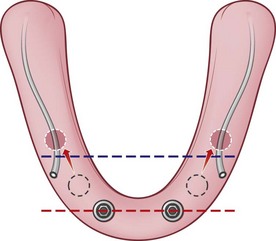 FIGURE 8-12 The ability to have the distal implant platforms posterior to the mental foramina permits better anterior-posterior distribution and thus occlusal load support. 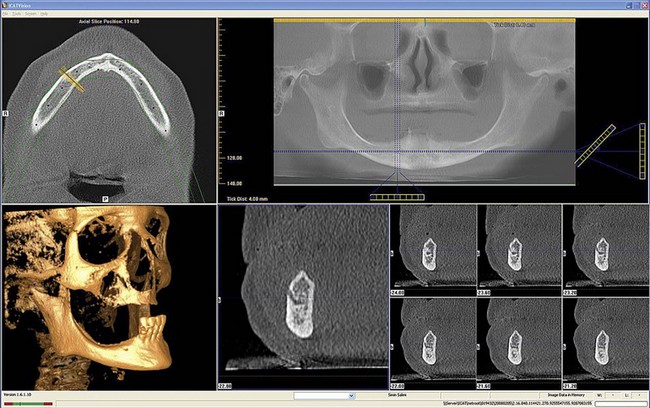 FIGURE 8-13 Cone beam computed tomographic studies may allow for a better appreciation of the position of the mental foramina.

Upon exiting the foramen, it makes gentle curves anteriorly to supply the cutaneous portion of the mandibular mucosa and the lower lip with its branches.25 On radiographic studies, the length of the loop has been reported to be between 1 and 5 mm.20,21,23,26 Arzouman et al.20 and Misch and Crawford22 have reported lengths of up to 7 mm in their study using dried mandible. Using direct measurements made during surgical dissections, Rosenquist in his 1996 article19 reported the loop length as 0 mm (nonexistent) in 43 patients, 0.5 mm in 13 patients, and 1 mm in 2 patients, with a mean length of 0.15 mm. This study was performed during the decortications procedure for posterior repositioning of the mental nerve for implant placement. Kaya et al.23 reported in 2008 on the loop length of the inferior alveolar nerve by comparing measurements made using panoramic radiographs and spiral computed tomography (SCT). The loop of the inferior alveolar nerve was identified using the panoramic radiograph in 28% of the 73 patients examined. The loop of the inferior alveolar nerve was identified in 34% of those patients when examined using SCT.

After reviewing the literature, it is apparent that the anatomic study of the bifurcation of the inferior alveolar nerve into the incisive and mental nerves warrants further study. At this time, however, a safe clinical guideline is needed for treatment of the edentulous mandible. The outline of the inferior alveolar canal as it passes the mental foramen can readily be measured and evaluated on panoramic radiographic examination as well as on cone beam CT or CT scans. To place an implant within a “safety zone,” the distal aspect of the implant needs to be approximately 2 mm anterior to the most anterior aspect of the inferior alveolar loop; consideration for the diameter of the intended implant to be placed must be kept in mind as measurements are made for the initiation of the osteotomy. Because the diameter of the most commonly used implant for the treatment of the fully edentulous patients is 4 mm, the radius of the implant is 2 mm. The osteotomy should place the mid-body of the most distal implant 4 mm anterior to the loop of the inferior alveolar nerve, as described in the surgical protocol described in this chapter, to avoid insult to the nerve. Appreciation of the safety zone is necessary because the proximity of the implant to the nerve generally results in either neuropraxia or the loss of the implant secondary to soft tissue encapsulation from the epineurium of the nerve instead of bone, resulting in failure of the implant to osseointegrate (Figure 8-14).

FIGURE 8-14 A minimum 2-mm safety zone should be allowed from the distal-most portion of the implant to the anterior loop of the inferior alveolar nerve.

The panoramic radiographic scan is still the radiograph of choice for general evaluation of the edentulous mandible. This radiograph permits observation of the path of the inferior alveolar canal, topography of the alveolar ridge, and the general state of the remaining teeth in the maxilla and the mandible. Using the panoramic radiograph as the only radiographic study has its limitations. The width of the mandible cannot be seen and the intraforaminal distance cannot be accurately measured as the “curved” mandible if flattened on this two-dimensional study. Therefore, the only helpful measurement from a panoramic radiograph is in the vertical axis (Figure 8-15). To further appreciate the topography of the mandible, a CT or cone beam CT scan may be necessary (Figure 8-16). Conventional lateral cephalometric film also shows the volume and width of the anterior mandible (Figure 8-17). 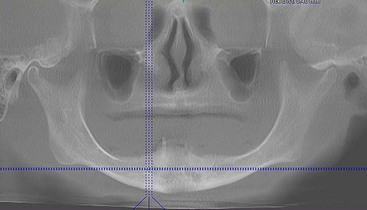 FIGURE 8-15 The panoramic radiograph only allows for evaluation of the vertical edentulous ridge and its length.