The aim of this chapter is to describe the behaviour of individuals in terms of team roles and how the various dental team members interact with each other in the workplace.

The chapter should lead to an understanding of the commonly identified roles that people play in teams and appreciate that some team roles complement each other better than others. Readers should also be able to analyse the balance of the team roles that exist in their own place of work.

Research into the behaviour of individuals as part of a team indicates that people take on particular roles in teams, and that it is the balance of these roles which determines the success of the team.

The composition of a team, and the ways in which the team members complement each other, is critical to success.

What is a team role?

The term team role refers to behaving, contributing and interrelating with others in the workplace and related environments in a mutually beneficial way. For practical purposes, it is necessary to distinguish between an individual’s team role and their functional role. A person’s functional role is the specific functions they perform, but their team role may, for example, be leader, coordinator or implementer.

The ways in which we come to behave as we do are complex and beyond the scope of this book. A simple schematic of factors influencing behaviour is reproduced in Fig 7-1. 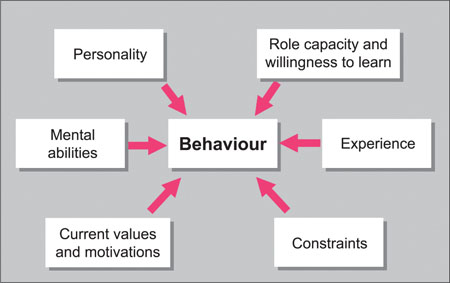 These factors can be enlarged upon:

→ personality: psychophysiological factors, such as extroversion or introversion, and high or low anxiety traits affecting behaviour

→ current values and motivations: personal ways of seeing yourself

→ constraints: factors in the immediate environment which influence behaviour, for example feeling awkward and shy in the presence of senior members of the team

→ experience: the accumulation of experience in life, which tempers behaviour

→ capacity and willingness to learn: learning about roles of others and being able to appreciate variations in personality and, in turn, behaviours.

Simply put, individuals tend to adopt a stable pattern of association with other members of their team. This is based on personality, which is modified by the thought process, and then further modified by personal values, governed by perceived constraints, influenced by experience and added to by sophisticated learning.

The types of behaviour that people engage in are infinite, but the range of behaviours that make an effective contribution to a team’s performance can be narrowed down to nine team roles (Table 7-1). These roles all have their strengths and weaknesses.

The more prominent the strengths of an individual, the more conspicuous the weaknesses can be. That is why powerful individuals may be as renowned for their quirks as for their talents. Allowable weaknesses are those weaknesses that emphasise strengths.

Do weaknesses matter? If the weaknesses are the price to be paid for important strengths, and other members of the team can compensate for the individual’s weakness, then it may be a small price to pay.

Allowable weaknesses should generally be accepted and not corrected, because such correction could undermine the strengths of the individual. There is, however, a fine line between allowable weaknesses and unacceptable behaviour. These differences are outlined in Table 7-2.