In physical evaluation, clinical laboratory procedures may provide the final clue essential to confirm a diagnosis. They may also lead to the early detection of disorders with vague signs and symptoms, contribute to the discovery of significant, unexpected conditions, or provide a baseline against which response to or the safety of a therapeutic intervention may be measured. Consequently, in some situations, clinical laboratory information may be essential prior to the initiation of therapy. In other instances, it may be an important component of a diagnostic or therapeutic follow-up evaluation. Prior to ordering laboratory procedures, the clinician should elicit a careful medical history, perform a thorough physical examination, evaluate radiographic studies, and then request the tests from the laboratory that are most likely to either confirm or exclude the provisional diagnosis. A primary organic abnormality may be reflected in specific laboratory findings that may suggest a specific diagnosis or group of diagnoses, prompting the clinician to initiate appropriate therapy, consultation, or referral. This chapter briefly reviews some of the more frequently ordered tests or procedures utilized in medicine and dentistry.

The complete blood count (CBC) is an automated test that yields valuable information about red blood cells (RBCs), white blood cells (WBCs), and platelets. It is actually a broad screening panel consisting of several tests utilized to identify numerous disorders such as anemia and infection (Table 7.1). To understand fully the relevance of these tests, it is necessary to examine the clinical significance of elevated or diminished values for the various determinants included in a CBC. However, it should be emphasized that the various blood elements are closely interrelated and individual values must be interpreted in the context of the entire hematological examination.

Erythrocytes transport oxygen to all tissues and carbon dioxide to the lungs. Their production is stimulated by hypoxia or anoxia and mediated by erythropoietin. The RBC count expresses the number of RBCs per microliter of whole blood. RBC excess (erythrocytosis) may be caused by dehydration, conditions of low oxygen tension, or polycythemia vera. Reduced numbers of RBCs may occur as a consequence of blood loss (hemorrhage), bone marrow failure, renal disease, hemolysis, leukemia, multiple myeloma, and nutritional deficiencies.

The Hct is the percent volume of packed RBCs in a unit volume of whole blood and provides information about the number and size of red blood cells. An elevated Hct may occur with dehydration, burns, polycythemia vera, and conditions of low oxygen tension (smoking, living at high altitudes, congenital heart disease). A low Hct may be caused by anemia, hemorrhage, bone marrow failure, hemolysis, leukemia, nutritional deficiency, multiple myeloma, and rheumatoid arthritis.

Hgb is the oxygen-carrying molecule in erythrocytes and its concentration is reported in grams per deciliter of whole blood. Low Hgb values are usually indicative of either anemia or blood loss.

There are several types of white blood cells or leukocytes (Table 7.3) that contribute to the WBC count. Neutrophils are the body’s predominant phagocytic cell. B-lymphocytes synthesize and secrete antibodies. T-lymphocytes help mediate B-lymphocyte function and have cytotoxic activity against abnormal or virus-infected cells. Monocytes serve as sentinel cells against numerous pathogens and can turn into activated macrophages. Eosinophils and basophils release numerous immunomodulating substances that contribute to the immune response.

The normal WBC count may vary in a particular individual during the course of the day. Conditions of WBC excess (leuko-cytosis) are associated with infection, inflammatory disease, leukemia, severe emotional stress, or extensive tissue damage. Conditions of WBC deficiency may be observed with bone marrow failure, certain autoimmune disorders, exposure to cytotoxic drugs or chemicals, radiation exposure, or diseases of the liver and spleen. Minor variations outside the normal range are not significant as long as the differential count on the peripheral blood is normal. The differential count is typically performed if the WBC count is outside the normal range. In a differential count the various types of leukocytes are visually identified and counted on a peripheral blood smear. 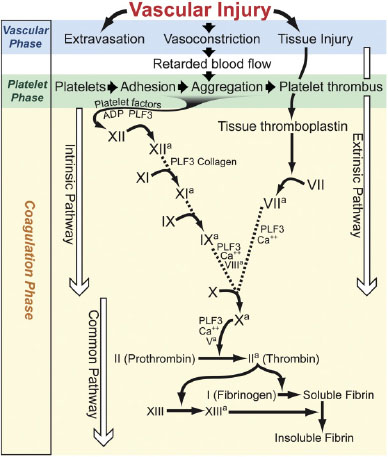 A physiologic mechanism by which the body controls undesirable blood loss is called hemostasis. Adequate hemostasis is dependent on the proper function of its three essential phases: the vascular phase, the platelet phase, and the coagulation phase (Figure 7.1). A discrepancy in one or more of these phases may result in a bleeding disorder, which may be either inherited or acquired.

The vascular phase of hemostasis is dependent on the integrity and function of the vasculature. When a blood vessel is damaged, it constricts to reduce blood flow. Examples of inherited disorders associated with impaired vascular function include hereditary hemorrhagic telangiectasia (HHT) and Ehlers-Danlos syndrome. The most likely acquired disorder of vascular function is allergic purpura. When necessary, a tourniquet test may be performed to clinically assess vessel integrity. In this provocative test, a blood pressure cuff is inflated to maintain pressure halfway between systolic and diastolic for 5 minutes. After deflating the cuff, the skin is allowed to return to its normal color, at which time the number of petechiea visible in a 1-inch-square area on the ventral surface of the forearm is determined (normal: < 20/square inch).

The PT is utilized not only to assess an undiagnosed bleeding disorder but also to monitor the therapeutic effect of oral anticoagulants (e.g., warfarin). However, testing reagents used to determine PT vary from laboratory to laboratory, which precludes direct compari/>